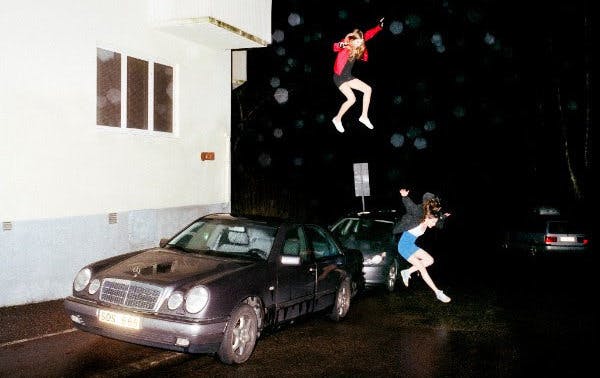 I’m not going to review Science Fiction. It’s too early for that. This is, deservedly, about to be the single most dissected rock album of 2017 and we’re about to read a hundred brilliant writers talking about the quality of the album, trying to piece this impossible puzzle together. Thankfully, that means I don’t need to. What I do need to talk about however — more for my sake than yours, I’m aware — is what this album is.

As my friend, Tom, put it (in between the two of us frantically messaging each other the words “fucking hell” over and over again as we listened), this album is a suicide note. This is Jesse Lacey accepting, or at least trying to accept, that the project that defines so much of his life is over. Science Fiction is a full stop at end of a truly legendary career.

‘Waste’, the album’s third track, drives that point home. Hearing Lacey singing phrases like, “You and I are stuck like glue / And that’s the god damn truth / Baby bye-bye” and “If it’s breaking your heart, if nothing is fun / Don’t lose hope, my son / this is the last one”, is nothing short of devastating. We’ve known for years that this is a band that could have — and probably strongly considered — calling it a day a while back. To know that, you only have to see them live and watch Lacey’s face when he obligingly trots out ‘Seventy Times Seven’, or one of the other early sappy pop punk songs he’s clearly a bit embarrassed by. But this is the first time he’s ever told us directly. And, just as hard as that is to hear as a fan who has done nothing but demand more from the band over the years, it’s clearly no easy feat for man himself.

At the end of that same track, he goes on to sing, “It’s going to feel so good to let it go / It’s all in your head, your race is run / Don’t give up, my son, this is the last one”, as if trying to allay his own fear of separation. It’s fear, uncertainty and mental bargaining all at once. As mere listeners, we’ll never truly understand just how bloody the battlefield gets in the war between the weight of a legacy and a desire to leave it behind. We’ve seen musicians make the choice multiple times — ask Neutral Milk Hotel fans what Jeff Mangum is up to these days, or so much as lock eyes with a Tool fan, for proof of that — but it’s rare that we get to read their diaries like this. It humanises a man that for years has existed more in myth than anything else. On the most indecipherable body of work Brand New have ever put together, we are being given the most candid look into a mind we’ve put on a pedestal.

There’s more show than there is tell, however. As well as listening to the kinds of conversations a person should only ever have with themselves in their head during a particularly laboured shower, there are fallen scabs scattered across the album that show a band shedding their skin.

There’s the obvious repetition of the “And we sing this morning, that wonderful and grand old message…” soundbite from Daisy’s title track, but that’s only the beginning. Channeling that Always Sunny meme where Charlie Day is stood in front of a maniacally put-together conspiracy board, another mate, Amrit, sent me an email full of references and easter eggs he’d found on Science Fiction. And, while some of these could be both he and I trying to trace lines that aren’t there, it’s incredible how many nods there seem to be to the past. I’m not going to spoil them all, because nothing beats the feeling of connecting these dots in your own time, but here’s a few.

‘Could Never Be Heaven’ contains the lyric “I was drowning in the lake”… Where at the bottom you’ll find all his friends, perhaps?

‘In The Water’ has “’Hide your daughters’, the old men say”, which is reminiscent of ‘You Won’t Know’’s “Your daughters weren’t careful / I fear that I am a slippery slope”.

And ‘Desert’ serves almost as a companion piece to one of the few ‘early stuff’ songs the band wear with pride, ‘Play Crack The Sky’. There are references to hearing “a voice say, ‘this is the end’” and finding bodies washed up on shores (whether they were found thirty miles west is undetermined).

And that’s just in the space of three consecutive songs.

Science Fiction also serves as something of a tour of influences. The start of the album, especially, feels as though Lacey is flicking through his record collection, frantically deciding on what desert island discs he most desperately wants to squeeze into this farewell. There are homages to Modest Mouse all over both ‘Can’t Get It Out’ and ‘Same Logic/Teeth’, with the former’s lackadaisical delivery and the Isaac Brock aping frenzy of the latter’s middle eight. A love for Morrissey clearly wasn’t a phase, either, as the flowery laments of ‘Could Never Be Heaven’ prove, and elsewhere there’s the Depeche Mode flavoured 451. There’s a gold star on offer to whoever can figure out the roots of ‘Desert’, too, cause the best I can do is Goth Beegees based solely on the falsetto backing vocals.

The idea that this is the last we hear of Jesse Lacey, even once Brand New is laid to rest, is unfathomable. But, if that did turn out to be the case, he’ll be able to look back at this knowing he got to perform the most uniquely Brand New karaoke set he could.

Even with all of the above, though, the truest manifestation of the record’s finality is the sheer amount of care that’s gone into it.

I’ll level with you, I had The Fear with this album like I never have before. Years and years of mysterious dicking around built a frustration in me, and a million others. The shirt that announced their breakup felt like a crass move; the mystique I once adored had started to feel like an exercise in shithousery. I was sure, especially after feeling like tide-over single ‘I am A Nightmare’ was something of a rudimentary effort, that Brand New had reached breaking point and were sure to phone it in on an album, if it ever actually came along. Shut me up, didn’t they?

This is a rare album where having undiscovered subtleties pointed out cuts deeper than finding out that Frodo has been bumped off in next week’s Game Of Thrones ever could. (Fear not, he wasn’t. But they have brought Dumbledore McDragonwang back to life. Sorry.) For that reason, I’m not going to go into specifics. I will say, however, that there is an absolutely incredible amount of things happening on this record. It’s the sort of album that can only be born from years of work, and the sort of album that will continue to reward repeat listens years from now.

And then… And then, there’s ‘Batter Up’. The band that have set the pace for an entire genre have signed their farewell letter with an eight-minute song called ‘Batter Up’. Lyrically, the song is far from self-congratulatory — it’s probably the darkest on the album, in fact — but there’s no way that a band who put this much thought into things will have done that by accident. They certainly didn’t just happen to write the most enthralling instrumental passage of their career as an outro, either. “Over to you, everyone else.” It says. “Have fun following that.”

In the current musical climate, where the ‘emo revival’ (I know, sorry) bands that formed in Brand New’s shadow have grown into artists that are offering some of the most interesting contributions to alternative music as a whole, it’s a perfect way to pass the torch. They just so happen to have placed that torch somewhere that means it’s gonna take some serious reaching to get a hold of. I guess, in that way, it’s a bit like Kendrick Lamar’s ‘Control’ verse… Just, y’know, way sadder. In terms of artistry, the bar has been raised — and it’s going to be a hell of a lot of fun watching a wave of bands on fine form attempting to reach it.

So, that’s it. Brand New, bar a couple of now-unmissable tours, are done. They came, they saw, they conquered, they went away for a bit, and then they conquered one final time. What a way to do it. What a band.

What a fucking band.

Brand New frontman Jesse Lacey has responded after being accused of sexual misconduct.

From Lil Peep To Paramore, Emo And Rap Have Been Related For Years

Punk’s not just been “going crunk” for the laughs – for ages, hip-hop’s been an influence on so many chart-conquering alternative bands. We dig into that history, here.

The band’s fans have identified a countdown, which’ll seemingly end on November 6. What could it all mean?

The Massachusetts trio took on the New Yorkers’ hit Jesus Christ for Annie Mac’s BBC show, and have also revealed new track Anyone Else.

Science Fiction, the band’s first LP for eight years, just came out. Like, just now. So, snap to it.

Is it November yet?