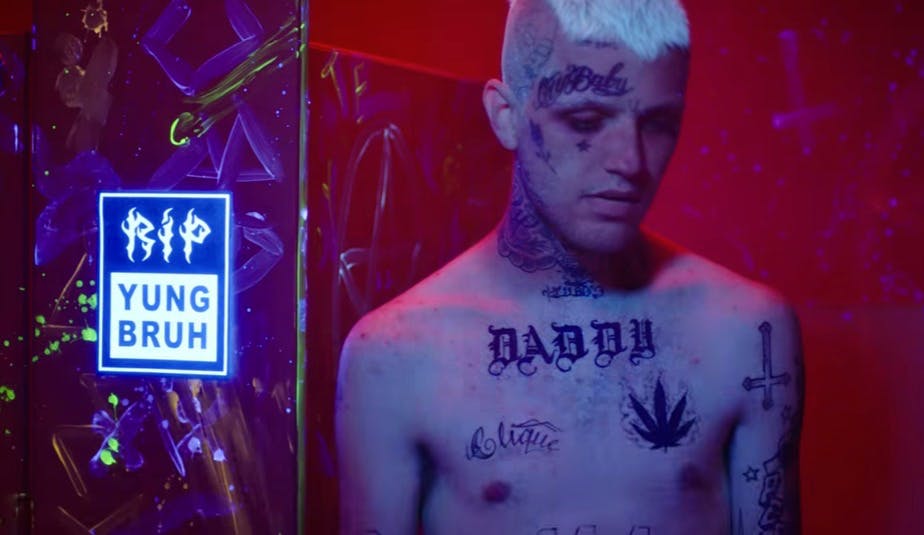 In 2017, emo and rap are well and truly intertwined. Twenty-year-old rapper Lil Peep has been touted as the future of emo, and despite some protestation, it makes perfect sense. He not only samples emo and pop-punk tracks, but is evidently influenced by the artists. His look, face tattoos and all, is straight from the alternative playbook.

And It isn’t just him. Lil Uzi Vert, who raps pretty emotionally and posts videos of himself miming along to Paramore songs, recently said that Hayley Williams was his biggest musical influence. Tyler, the Creator, Lil Yachty, and Young Thug have all referenced emo or been called “emo rap”.

The influence of emo and pop-punk on rap has been recently documented on Pigeons & Planes, and it makes sense to me. Elijah Watson of Track Record recently wrote: “…the cosmic rise of rappers like Lil Uzi Vert and Lil Yachty feels weirdly similar to the emergence of emo music in the early 2000s. Like today’s misunderstood rappers, emo bands have been criticized not only for stylistic deviations within their genre, but also for their aesthetic choices.”

Today’s emerging generation of young rappers were teenagers when emo and pop-punk were hitting the mainstream. That, combined with the redundancy of older-fashioned and more easily definable genres, means that once-unlikely influences can seep, naturally, into their work.

Above: Lil Peep is one rapper who wears his pop-punk influences, quite literally.

The genres aren’t that different, when you break them down. Emo is lyrical, emotional, and rooted in its aesthetics. So is rap and hip-hop. Blink-182 founder Tom DeLonge, noting the similarities, has said: “hip-hop, like punk, was from the streets. It was always more of an emotional vehicle than a musical one. So it makes sense that you would someday see them aligned with each other.”

But while emo and pop-punk’s influence on rap has only recently been recognised (or existent at all), the genres have always been intertwined in a sense. Many pop-punk and emo artists have emulated aspects of hip-hop and covered their songs – sometimes in a nice way, sometimes not-so. Alternative music’s tendency to cover hip-hop and pop tracks has always felt simultaneously sneering and as an effort to “legitimise” it.

In 2008, rock/emo band Framing Hanley blew up after they released a version of Lil Wayne’s Lollipop as a single. Its five-and-a-half-minute long video makes it seem as if the cover is tongue-in-cheek, and while it could be sincere, it’s evidently a bit of a pisstake. They later said that they did it “for fun”, but that they wanted to be known as more than “just ‘that rock band that covered Lollipop’".

Above: The video for Framing Hanley’s 2008 cover of Lil Wayne’s Lollipop.

Which brings me to the shittier aspects of hip-hop’s “influence” on emo and pop-punk: that a lot of the time, these bands were just taking the piss. Despite all the things that connected the genres, the styles, of the music at hand, alternative musicians still appeared to see themselves as entirely separate. They seemed to think that covering these songs was funny, which is problematic in itself, as what is inherently funny about hip-hop?

In 2008, a compilation album entitled Punk Goes Crunk was released, the seventh entry in Fearless Records’ Punk Goes… series. It contained covers of hip-hop songs by 15 emo and pop-punk artists including Say Anything, All Time Low, and The Maine. The cover shows someone wearing gold chains and throwing up gang signs surrounded by money. It cannot be read as anything other than a pisstake. To be fair, the series also includes 1980s, metal and pop covers collections, but there’s still a strong mocking element here. Plus, it will never not be uncomfortable to hear New Found Glory’s Jordan Pundik say that he’s “black and proud”.

That isn’t to say that it’s inherently problematic for emo and pop-punk artists to incorporate hip-hop elements in their music. It’s all in the intent. Good Charlotte, who have always said that they have a “hip-hop mentality” in their approach to business and music, released an album of remixes in 2007. Greatest Remixes is a compilation album of (you guessed it) remixes of Good Charlotte’s songs by producers including Jay E and Marshall Goodman, and it’s very much a marriage of hip-hop and pop-punk, with artists like Patrick Stump and William Beckett remixing some tracks. Metro Station covered a song for it. It also contained original songs, reworkings of older Good Charlotte tracks, and some rapping by Joel Madden.

Greatest Remixes wasn’t entirely unprecedented. Dead Executives, who are credited on the album, are a producing team comprised of Joel and Benji Madden and Jay E. In 2005, they formed and produced and co-wrote three songs on Hilary Duff’s album, Most Wanted. While the album and Good Charlotte’s hip-hop makeover (they started wearing gold chains and bandanas slightly before this time) are maybe a little misguided and cringey, they’re well-meaning. They’re evidence of the group’s genuine admiration of hip-hop artists and their preoccupation with the kind of hustle that they believed would pull them out of poverty.

Similarly, Fall Out Boy managed to incorporate hip-hop into their work without appearing fetishistic or mocking. From the start of their career, Pete Wentz’s attitude to fame seemed to echo hip-hop business frameworks more so than rock ones; he started a clothing line and a record label that would become something like a collective. With Decaydance (now DCD2), an imprint of Fueled By Ramen, Pete Wentz signed similar bands, saying that “People are going to be piggybacking bands off of us. Somebody’s going to be pulling those strings, why would it not be me?”

Above: Fall Out Boy’s video for This Ain’t A Scene, It’s An Arms Race.

These Decaydance bands toured together, featured on one another’s songs, and supported each other at shows. Some weren’t strictly emo – the hip-hop influence was evident in Gym Class Heroes and Cobra Starship, both of which featured rapping. And Fall Out Boy’s own fondness for hip-hop became clearer on their third album, Infinity On High, introduced as it is by Jay-Z dedicating it to “anybody that people said wouldn’t make it”. The video for This Ain’t A Scene, It’s An Arms Race shows Patrick Stump in a recording studio being laughed at by rappers. Kanye West remixed This Ain’t A Scene…, poking fun at Fall Out Boy further, singing “now I don’t know what the hell this song is talking about” and mocking the band’s whiteness.

Fall Out Boy’s crossovers with hip-hop continue to this day, but it’s long been evident that they legitimately respect the genre. They wanted a part of it. They were embarrassed at their own work in comparison to hip-hop, which is crucial to any assessment of their assimilation, or adaptation. They admired hip-hop, and felt like they were operating at a level below it, whereas the artists on Punk Goes Crunk offer the impression that they’re somehow above it.

Above: Billboard chart-topper Lil Uzi Vert is a massive fan of Paramore.

Sometimes emo and pop-punk artists emulated or incorporated hip-hop elements without being truly aware of it. While diss tracks have been used in other genres, they’re most commonly found in hip-hop. And similarly, emo and pop-punk acts aren’t unfamiliar with diss cuts: Call Out by Hit The Lights, Bring Me The Horizon’s Blacklist, and King Of Amarillo by Issues are three examples.

Most famous of all, perhaps, in the world of emo diss tracks is the Taking Back Sunday and Brand New beef. When Jesse Lacey of Brand New’s girlfriend cheated on him with Taking Back Sunday’s John Nolan, everyone involved handled it pretty terribly. Brand New released a song, Seventy Times 7, that took aim at Nolan. Lyrics like “you’re as subtle as a brick in the small of my back” were taken directly from phone conversations they had. Taking Back Sunday went one step further with 2002’s Tell All Your Friends, an album that incorporated several jabs at Brand New, but most notably on the track There’s No I In Team. The song directly quotes several Brand New songs, including the original diss track, and takes aim at the band themselves.

Above: Weezer and Chamillionaire’s video for Can’t Stop Partying.

The beef went on for a while longer, with Brand New issuing t-shirts that read “mics are for singing not for swinging”, a jab at TBS frontman Adam Lazzara’s penchant for mic swinging. The bands continued exchanging blows in the media, and never really seemed to get over it.

Pop-punk and emo acts have also been known to feature hip-hop artists on their songs. Fall Out Boy have done it a few times, Weezer have featured Lil Wayne and Chamillionaire, and You Me At Six recorded with rapper Chip.

It’s not surprising, then, that emo and rap, pop-punk and hip-hop, have a recent history that’s more entwined than might initially be apparent. What is surprising, though, is that we’re maybe only recently acknowledging this shared path, through new collaborations and the rise of emo-influenced rappers, some of whom are dominating charts on both sides of the Atlantic. And as once-solid pigeonholes continue to crumble, and artists who worshiped mainstream-breaching emo in the early and mid-00s come of age, this symbiotic, and only sometimes slightly embarassing relationship will continue to blossom.

[An earlier version of this article featured an image of Paramore we mistook for a press shot that was actually from DIY Mag, massive apologies guys.]