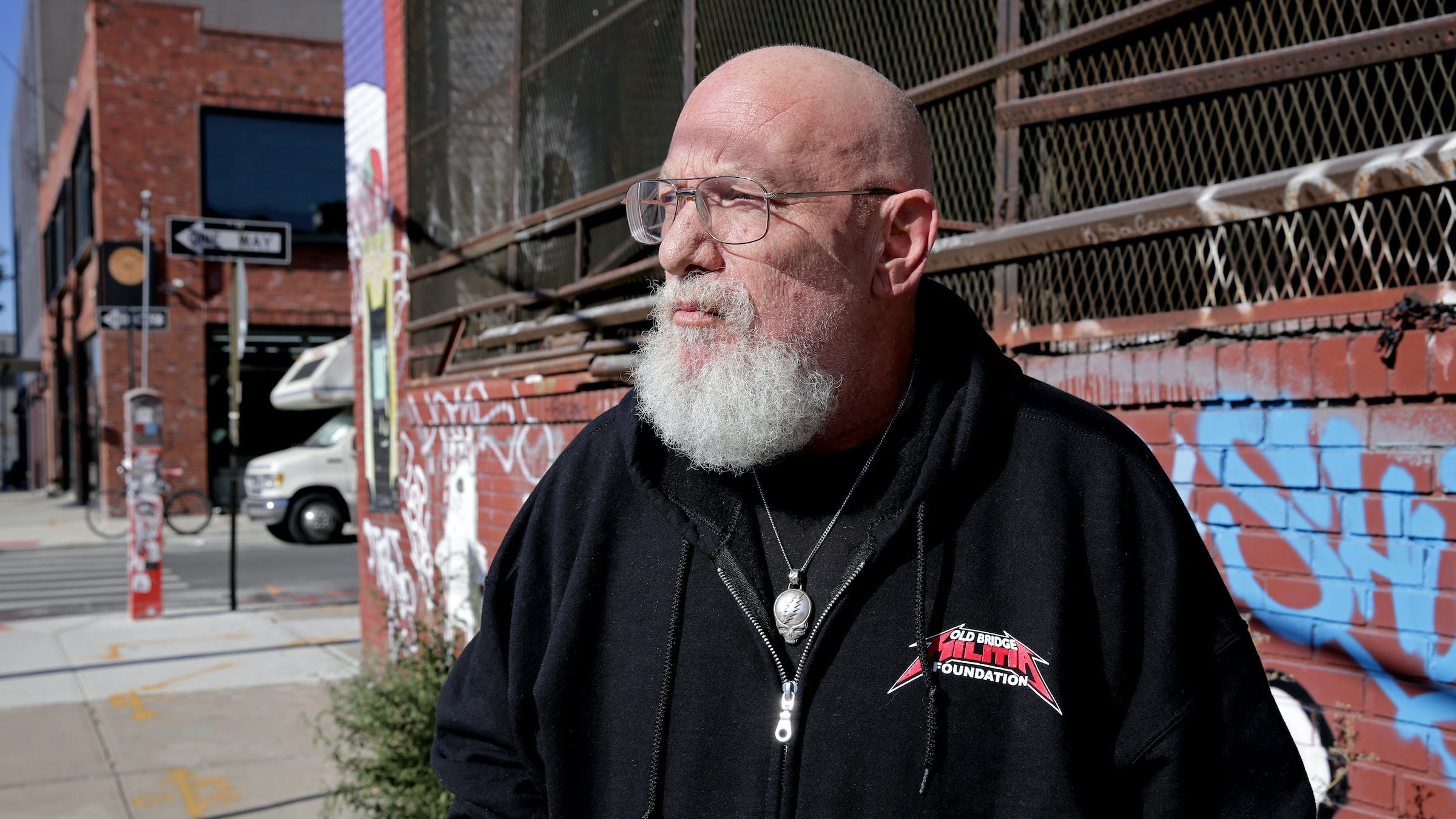 Let’s get it out of the way: Jon Zazula is the guy who made Metallica. After hearing the Four Horsemen’s demo No Life ‘Til Leather at his New Jersey record store Rock’n Roll Heaven, Zazula, better known as Jonny Z, founded Megaforce Records with the express purpose of releasing the band’s work. But ask central figures in the East Coast metal scene, and Jonny was more than that -- to bands like Overkill and Raven, or behind-the-scenes figures like media personality Eddie Trunk and publicist supreme “Metal” Maria Ferrero, Zazula was a renegade mentor, a man who would take whatever risks necessary to give the evolving metal scene the furious sounds they needed to make them feel less alone.

“I fall in love,” says Jonny Z sagely as he sits in Kerrang!’s Brooklyn office. “I fall in love with my bands, musicians, music. When I heard Metallica for the first time, there was no question.” A smile creeps over his face. “When I heard Anthrax for the first time, there were a lot of questions! I wasn’t sure about Anthrax until I heard Metal Thrashing Mad for the first time in the studio, where they came together. It wasn’t easy for Testament in the beginning, it wasn’t easy for Overkill in the beginning, but they kept at it, and through longevity, they’re bigger than ever. If you didn’t sell out, and kept true to form, and kept banging and growing your fanbase, you’d get bigger than ever.”

Jon’s new book Heavy Tales recounts not just the awesome highs of Megaforce’s peak but the insane, desperate realities of the music industry before the digital age. From his upbringing in the Bronx to the day Cliff Burton died, Jonny Z tells the story of his life with both brutal honesty and engaging panache. The book is an awesome catalog of music history for the completionist metalhead, but more importantly it’s a human viewpoint inside the life of one of metal’s most crucial figures who was always too busy to worry about stepping into the spotlight.

“When we did the discography [for Heavy Tales], I saw how much we did in a short period of time, I was blown away!” says Zazula with a hint of disbelief. “I’m a funny person -- I don’t walk around talking about Metallica, and I was working so hard at Megaforce that I never had any time to reflect on anything. So the book just blew my mind in general -- we did all of that?”

When did you decide you wanted to turn your life into a book?

I always wanted to do a book, but when I retired in June of 2018, I was sitting around in my backyard just bored to tears, and I decided to write a book. Another day goes by, and this guy Harold Claros-Moldonado calls me up to do a Metallica interview. Now, I refuse to do any more Metallica interviews -- even though I’m talking about it all day every day now! I asked him for fun to see a sample of his writing. He’d just gotten out of the army, and had written pamphlets for tools and such. I thought maybe he could help me research my timelines. Because the main reason I haven’t written a book is because I can’t remember anything anymore! And he helped me build the timeline from the Venom [Die Hard/Acid Queen] picture disc onwards.

From what’s in the book, the Venom picture disc was a huge moment for you, and Rock’n Roll Heaven.

For the Venom picture disc, I only made 1,000, just to see what it’s like -- what the piranhas do when a body hits the water. We sold out in five days, and that was before the Internet. All people had to do was find out it existed, and it sold out.

You open the book with stories about growing up in the Bronx, including some intense moments about hiding from your dad when he chased you with a broom. Was that hard to talk about?

That’s the stuff that flowed. I was very concerned with not boring the public. I didn’t want to go into too many details, so I wanted to tell the basic story. I wanted to tell the story of my father because my father was a man who was afraid to take a chance. He was afraid to do anything. And I grew up to be the polar opposite of that, because I took chances that were completely irrational. No back-up, just pure drive and faith. That was easy to write about -- Wall Street was easy to write about, doing time for being part of a corrupt organization.

So much of the book is about doing what seems like utterly insane things on the fly -- buying a Winnebago to get Raven and Metallica on the road, for example.

We had questions that were unanswerable, and if we had an answer we had no money to pay for the answer! Marsha [Zazula, my wife] was good for that too, because anything I couldn’t figure out, she figured out. Between us we were able to make it happen. There were no textbooks for us, but we made it happen.

Are you ever nostalgic for that kind of life -- say, climbing into a fifty-foot hole in the basement of a venue the night of a show?

I don’t want that ever again. When I tell that story, with the ladder going down 50 feet on a spiral staircase to get it with headlights, that was just a small problem I had at the Halloween Headbanger Ball. Twelve hundred people showed up for that, and it was Raven, Riot, and Anvil. It wasn’t the only problem.

What was a problem that remains in your memory?

The biggest problem I ever had was when Venom played in the US for the first time. They brought an IRA bomb board, smuggled on the airplane, with dynamite! And they took two hours while the crowd was waiting after Metallica to come on. The venue owner kept asking me, “John, is this safe?” Is this safe? They had bombs on top of speakers! They had flash pots everywhere! When they shot the stuff off, the whole front of the audience had black faces! And they kept on going! And the next thing is, they blew a hole in the stage. And the second day, because it was two nights, we found the flash pot plates up in the balcony. That could’ve spiraled and taken somebody’s head off. That’s what the world was like for John Zazula in those days.

Who were some bands who you feel like deserved more?

Anvil were amazing in the ‘80s. Just a prime example. And later on, Raven -- slugging it out in the clubs and getting nowhere. We’re talking about going nowhere, right?

Or just not having the legacy you expected them to.

Raven outsold Metallica on Megaforce with All For One. That’s why Atlantic went crazy for them -- they had all these sales numbers. Unfortunately, the Atlantic move was terrible for them. I was there for the signing, but I wasn’t there for development, because Raven and I parted ways and they went with my partner. And I still feel terrible.

What about the opposite -- is there a band who got huge who you’ve just never cared for, or thought they didn’t deserve it?

I never had a thought like that cross my mind. Either I like a band, or I love a band, or I don’t waste my time with a band. Usually, if I don’t love a band, I don’t even bother. But I found music today I thought was very viable -- The Absence out of Florida. And a band from France called Arcania. Great bands!

Something interesting is how long it took you to warm up to Testament -- and that you finally did the day Cliff Burton passed away...

We went to the studio [to see Testament] the day after Ciff Burton’s death. We had just come back from Metallica and Anthrax at the Hammersmith Odeon, and then they went onward to Sweden. We heard, and then went on this big, long, never-ending walk along the pier in San Francisco, where we were to see Testament. When we got to their rehearsal studio, there was a band behind every door, and everyone was playing (Anesthesia)--Pulling Teeth. It was coming through all the walls. Some people say they were paying homage...but I think they were learning a part, to maybe get in the band. He wasn’t dead 24 hours -- it blew my mind. And it was in that blown mindframe that Testament opened the door to their studio, and they delivered. They delivered in spades.

Is there something that, all these years later, even with the changes in technology, you think promoters and label employees need to remember?

Promoters have shows play their place and don’t really promote ‘em. We used to have such success without the Internet -- I can’t imagine what you could do WITH the Internet. There’s a lot you have to do to do business, unless the band was really big -- but we were dealing with bands no one knew. Some people really blow my mind with how lackluster their promotion was. I really felt it all the time, when they didn’t do their job. It wasn’t me -- it was Maria [Ferrero], Ed Trunk, Marsha, all the people who worked for me were like Green Berets living in Never Neverland. It was a very groovy place, and it made for a great life while it lasted.

Finally, having seen the pictures section of the book, including the pictures from your teen years, we need to ask -- how did you manage that hair?

I had an afro pick! I would pick my hair out. I was a renegade kid. Traveled across the country on $5 a day, if I had it -- or stopping at farms and eating carrots. There’s a lot of living I did in my life -- and the best part of my life was the 40 years I spent with Marsha. Imagine telling your wife after hearing this cassette that you were going to a phone booth to call this band, and you’ll bring ‘em over here and make ‘em a part of your life?

Heavy Tales: The Metal. The Music. The Madness. As lived by Jon Zazula comes out October 29, and is available for preorder at any of the links below:

Catch Jon Zazula talking about his career and signing his book at one of the following events: