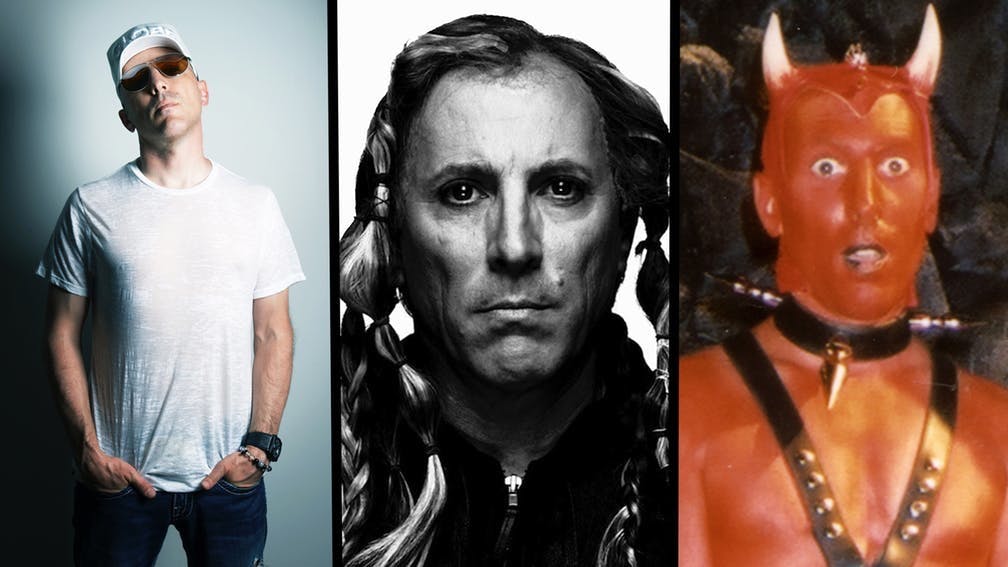 Much like Rick Sanchez, protagonist of insane cartoon show Rick & Morty, Maynard James Keenan seems to have one distinct super power: he does whatever he wants to, whenever he feels like it. As the frontman of such genre-defying and mind-blowing acts as Tool, A Perfect Circle, and Puscifer, the hard rock singer has made a career of taking on volatile and hefty projects, all while laughing in the face of anyone who tries to pigeonhole him.

But even outside of his musical endeavors—as a talented winemaker, philanthropist, and occasional actor (we’ll get there)—Maynard James Keenan has worn many unusual hats, both literally and figuratively. He has the rare distinction among rock stars of being immediately recognizable while at the same time never adhering to one specific image or identity.

Today, in honor of Maynard James Keenan ’s 55th birthday, we take a look at the many faces of one of rock’s most unique frontmen from over the last two decades.

Maynard may take his music incredibly seriously, but thankfully he does not take himself as much. In a 2002 video for the DIY comedy series Bikini Bandits, the frontman took on the role of Satan and bit the titular stars to go to the Vatican and commit acts of blasphemy in his name (the video also stars Marky Ramone as the Pope). But in truly classy fashion, Maynard doesn’t go all grim or black metal with his Lucifer—instead, he’s a sexy bondage devil who threatens to make the Bandits watch Corey Feldman dance until the end of time (which is scarier than most hells we can imagine).

When Maynard first announced he would be producing his own wine, plenty of cynics rolled their eyes and chalked his enthusiasm up to rock stars thinking they could do anything. But Maynard defied stereotype by not only following through on his ambition, but pursuing it passionately. Today, Maynard is known among wine circles for being a rock star who is as involved with his Caduceus Cellars vineyards as he is with his music. The above shot of Maynard during the early days of his Dionysian ambitions is amazing if only for the newfound excitement you can see in his eyes.

What’s most fascinating about Maynard’s role as frontman of hard rock/heavy metal act A Perfect Circle is that it seems to be the place where the singer can let his hair down (literally and figuratively). While Tool and Puscifer are both bands that seem heavily driven by tone and image, A Perfect Circle are a bit more open to new influences and a general rock’n’roll vibe. As such, this is where we get to see Maynard in a human light, sitting on the floor or hanging out with his band.

Because of his many faces and facets, we often think of Maynard as a formless source of bizarre, hilarious genius (sort of like Q in Star Trek: The Next Generation). But it’s also important to remember that Maynard is a fucking rock star: a dude who’s been making music, touring, and navigating the globe longer than you have. This shot is Maynard as without frills, looking like a true king of rock’n’roll.

Somewhere along the way, Maynard James Keenan distinguished himself from the nu-metal frontmen he was often unfairly compared to. As Tool became a more psychologically nuanced band, and their fanbase (and members) matured, Maynard started channeling his eccentricities in less obvious or immature directions. This didn’t mean he’d lost his sense of humor (see the barbecue show below), just that he wasn’t going to play the game. Here, looking like an unhinged member of the Audubon Society alongside his bandmates in Tool, Maynard still looks like he’s got a weird scheme in mind, it’s just not the one most metalheads would expect.

While Tool and A Perfect Circle showcase Maynard Maynard James Keenan as part of a larger collaborative band, Puscifer remains the distillation of his “creative subconscious,” and as such is the best display of Maynard as a musical Svengali. The fact that he’s sometimes front and center in shots of the band and other times barely visible might say something about how his subconscious is manifesting at any given time. But this shot, with Maynard smack dab in the middle, ready to roll, sums up the band’s identity: an incredibly cool project with an inspired nucleus at its core.

A Perfect Circle’s 2018 release Eat The Elephant didn’t just surprise fans because it was the band’s first album in 14 years. It also featured a cover with Maynard James Keenan and bandmate Billy Howerdel dressed like twin Uncle Festers who were too scary for a black metal band. It was an aggressive statement toward the accepted concept of the band as a traditional hard rock outfit: this well goes deeper and darker than you think. No matter how weird the new Tool album is, it’ll never be quite as off-putting as this.