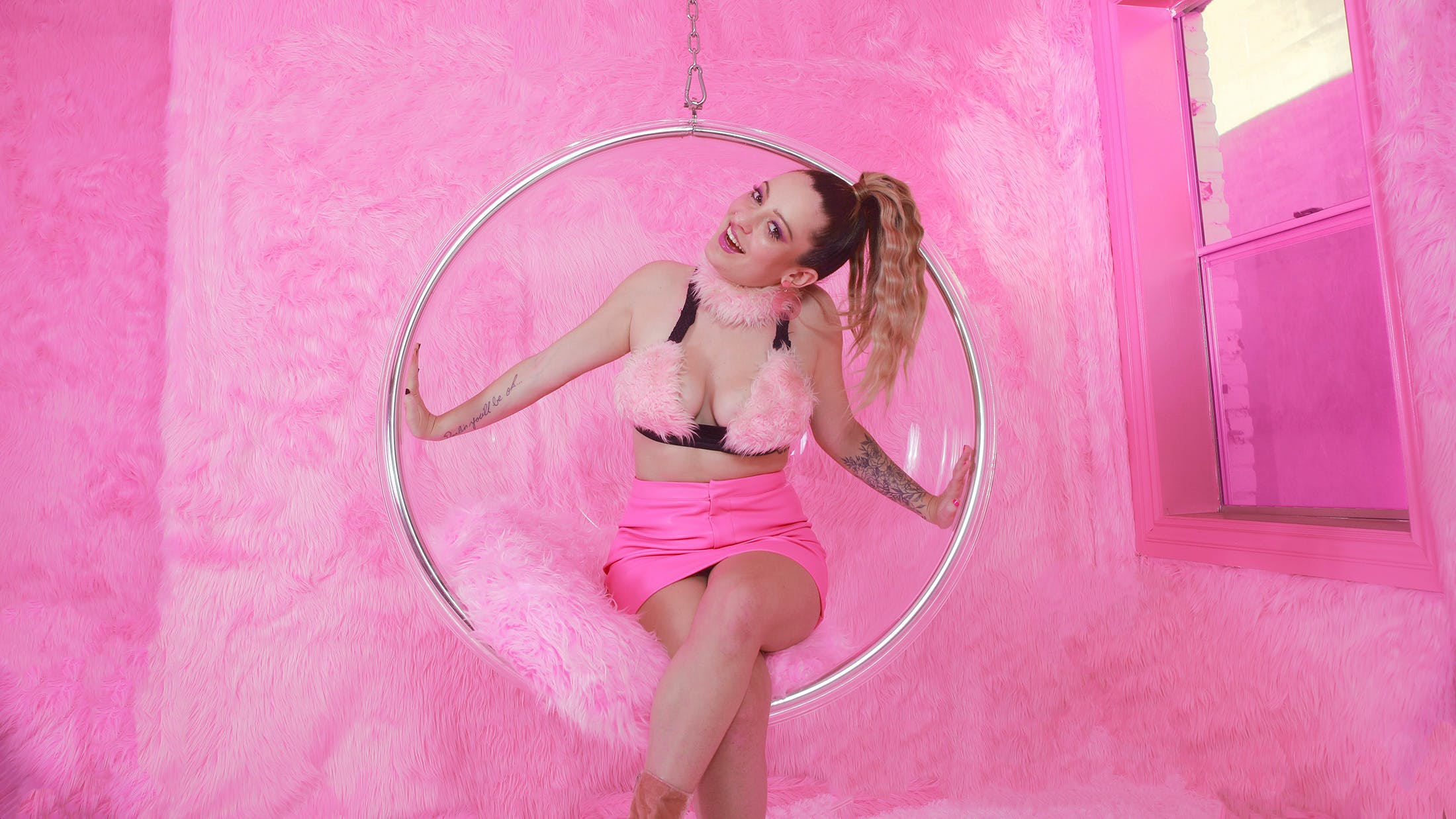 Hannah Collins didn’t feel like she could be who the music industry wanted her to be. It seemed like, as a woman making rock music, she could only assume one of two identities. “There’s this weird standard in rock where to be taken seriously, you either have to make yourself more masculine to fit the mould, or you have to become one of those super sultry vixens,” she recalls. “I never really felt like I fit in either of those boxes.”

She never felt like she looked like a conventional rock fan either. She’s five-foot-one, she’s curvy, and was in a sorority in college – a far cry from the “edgy '90s style heroin chic” look that was ubiquitous in the scene. Sometimes, she’d get death stares from men in the crowds at the shows she went to because they didn’t understand what she was doing there. The pressure to conform mounted and mounted as she came closer to getting a record deal, to the point where she began developing issues with eating.

In the end, Hannah snapped. Sticking up both middle fingers at these painfully narrow standards, she rebelled against them by becoming Scene Queen: a hyper-feminine character with a penchant for pink clothes, but who could still threaten violence upon any sexist pig who rubs her up the wrong way (viral smash Pink Rover sees her threaten to run over a catcaller with the eponymous car and 'put a knife up to his boner'). “I’m no longer listening to anyone,” she declares. “It’s the most exciting thing in the world for me to finally have that freedom in music. And you can tangibly tell that a girl had an influence on it because… look at it!”

Scene Queen’s hyper-feminine aesthetic exists, however, partly to make a point about the scene. “I want to make [my space] a place where it’s obvious that [women are] welcome here, because the scene traditionally hasn’t been catered to women,” she asserts. “I don’t think enough music is written for the female ear, even though women massively drive ticket sales and album sales.”

Any woman you encounter in an alternative space likely has at least one story to tell about experiencing misogyny in the scene, from being asked to “name three songs” to being groped at a gig. Hannah herself certainly hasn’t always felt safe. Just as she began college, the scene faced a reckoning as a slew of brave women came forward to speak about their experiences of sexual misconduct at the hands of some of the industry’s most powerful male musicians. She even stepped away from the community for a while, feeling that, as a woman, she was no longer safe there.

In her time away, Hannah moved out to California and immersed herself in the worlds of pop and hip-hop, even working behind the scenes writing songs for other artists. When she stepped away to focus on, at long last, making music for herself, its influence bled into her eventual output. Now, Scene Queen’s sound is a jagged jigsaw of clashing sounds, combining ferocious walls of djent guitar, and thumping trap beats that come together to create a seething harshness that will draw in fans of everyone from Ghostemane to Ashnikko and Kesha (the latter of whom Hannah reveals she’s compared to “constantly”). “It honestly really inspired me a lot, sound wise, to be around all these different types of music,” she says.

Cutting-edge music needs a fresh way of reaching the ears of listeners, so it’s no surprise that Scene Queen has thrived on TikTok, where Pink Rover has popped up here, there and everywhere, and her fanbase already know the refrain of the as-yet-unreleased Pink Panther before it’s even dropped on Spotify. It’s a space that has allowed her to find community within the scene again after having spent time away, and for a while, it was the only way she could, thanks to the pandemic halting in-person interactions.

“I started doing it for fun,” she remembers of posting funny TikToks about the scene before starting to share music. “[Making] funny videos is a way for me to show people different sides of myself. I think it’s really cool. As far as TikTok goes, I’m able to fully take control of my imagery, not that I don’t have full control now, but I can show people as much or as little as I want to on a regular basis.”

Hannah acknowledges that TikTok doesn’t suit every artist – some aren’t in the music game for making #content, and it’s sometimes can be demanding to the point of burnout: “TikTok is a very crazy world, you have to feed your audience 24/7.” However, it’s not an issue she herself has ever faced. “I have horrible ADHD that I’m not medicated for, so I’m bred for TikTok! I always have weird ideas that I can easily pump out. For me, it’s the easiest thing in the world as far as promo as concerned. It works out perfectly because I constantly want to post videos.”

As far as Hannah’s concerned, the primary goal of Scene Queen is to be a disruptive force within the industry. She’s here to knock walls down, opening up more ways for others to infiltrate and change it for the better. “The more out of the box I get, the more room there is inside the box for people to hop in,” she says. “By being this weird scene outlier, you’re going to have a lot more room for people that don’t make the traditionally alt. stuff.”

The definition of what can be alternative is rapidly expanding, and with Scene Queen bursting through to give it a shot in the arm, the rock world may well be able to boast with more credibility that it really can be for everyone.

Scene Queen unleashes second Bimbocore EP: “Buckle up because it’s a ride from start to finish”

Listen to Scene Queen’s EP Bimbocore Vol. 2 – which features a new collab with Mothica on the song The Rapture (But It’s Pink).

Scene Queen: “If there’s not a door that’s open for me, I have the full ability to kick it open”