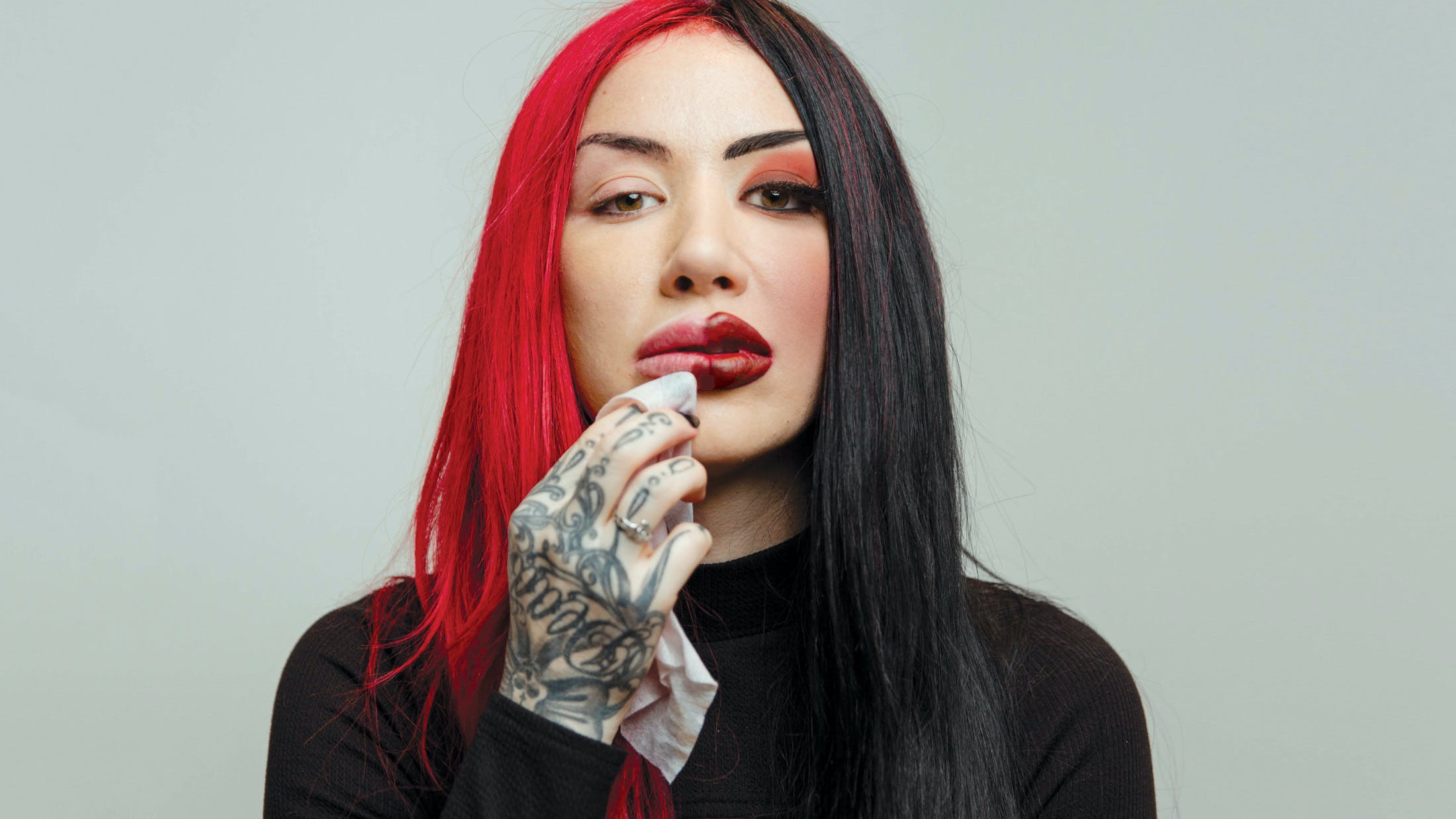 Ash Costello is preparing to step outside of her comfort zone. It’s not the first time she’s done so for a Kerrang! photoshoot, either. Back in 2016 she posed for snaps for a Halloween feature along with a pinktoe tarantula named Petite Feet, despite suffering from quite severe arachnophobia. This time it’s a lot more personal, though.

As she wipes off her characteristically meticulous make-up, the New Years Day singer is opening up and ready to offer the world a rare glimpse under the surface, and into the raw and real person underneath her public persona.

The world is much more accustomed to seeing Ash in fully glammed-up scream-queen mode, onstage and starring in the band’s blood-drenched videos. But away from the glare of the public eye, she’s a giggly, fun-loving homebody who loves to curl up on the couch “with no make-up on and hair in a bun”, albeit with a splatter film on or a serial killer documentary cued up. She also has a vulnerable side that not many people ever get to see. Until now. In recent times she’s struggled with her mental health, and, she says, she’s come through the darkest days of her life to stand tall on the other side of that battle.

“What scares me?” she ponders, as we begin peeling back the layers from this often most misunderstood of figures. It seems like a fair place to start questioning a woman who cites Rob Zombie’s House Of 1000 Corpses as her favourite movie of all time, and someone who was once employed as a professional scarer at an interactive ‘Halloween experience’ called Knott’s Scary Farm.

“I don’t like heights or being off the ground at all. I really hate it. I can also get quite scared of the dark. Isn’t that funny? But I’m trying to think of anything that’s scared me much more recently, and there isn’t anything.”

What about the prospect of failure?

“It used to,” she confesses. “In fact, I would have said my biggest fear was failure, just a few years ago. But now? This is going to sound very hippy of me, but these days I tend to let the universe guide me, and I know that whatever happens is meant to happen for a higher purpose. So if something doesn’t work out right now, I know that there’s a reason that will reveal itself to me later on. For that reason I’m not afraid of failure anymore.”

It’s no surprise that Ash is struggling to pinpoint what scares her these days. The past few years have been pivotal, both in terms of her own personal growth and her development as a musician and songwriter. It’s been three and a half years since New Years Day released their last album Malevolence – an aptly named record that was dark, angry and obsessed with the idea of vengeance. Ash told us at the time that she had channelled the spirit of Disney’s reimagined dark fairy Maleficent, as she dealt with heartbreak and a series of betrayals by people she once felt closest to in the world. Now, she’s reached a new part of her journey, where empowerment and positivity are more important than wallowing in darkness. The musical and lyrical embodiment of this change is new album Unbreakable, which, she says, has seen her strip away the metaphors and fictional characters of the past.

“It was almost like I was hiding behind a mask,” she reflects. “Instead of saying what I wanted to say directly, I used a metaphor because it felt like an easier way to get my feelings out. I was less afraid of what people might say because someone could put their own interpretations into the lyrics. That took the pressure off me, but I didn’t think it was the right thing to do any more, so I wanted to really push myself this time out.

“My favourite example of this is the first line on Malevolence: ‘So soft, so gentle this rose is kind and still’. What I’m talking about is my own personality, but what a fucking metaphor, right? Could it get any more abstract than that? Now you have lines like, ‘Don’t try to tell me what a girl wants / Just shut up and give it to me’ [Shut Up]. There is no metaphor – I’m saying exactly what I mean. That definitely makes me more vulnerable, but I’m not hiding behind a veil any more.”

It’s only now that she’s come through the other side that she feels comfortable discussing it, but the singer admits that making Malevolence was one of the worst periods of her life.

“It was a really dark time,” she confesses. “It was everything: relationships, career, friends who had come and gone or hurt me.”

Despite the turbulence and pain that she battled through, Ash maintains that she has “not one single regret”, viewing it all as part of life’s mysterious learning process.

“I feel like everything is part of the overall big picture, and if you didn’t live through it, you wouldn’t be who you are today,” she says. “Unbreakable comes from the life I’ve lived since Malevolence came out. Because I’ve survived, I feel like I am unbreakable. I can definitely still get into a depressed state where it’s really hard to get myself out of bed sometimes, but those times are few and far between these days. I’ve been trying hard over the past year to work on my faults. I feel like nothing can hold me back now.”

Some fans might miss the poetic, open-ended meanings of old, but there’s no denying that the more direct lyrical approach used on songs like I Survived and Come For Me hits with greater impact. Unbreakable is a statement of intent from an artist finally feeling confident enough to set aside the safety of allusion.

Perhaps surprisingly, in today’s climate and certainly given the tone of that song, the singer says she doesn’t actually face a lot of negativity online. She’s comfortable with fame, its trappings, and loves being the centre of attention. At the same time, she’s learned to be cautious about expressing herself on social media.

“I don’t feel like I’m allowed to have my own opinion on anything, because in today’s world, if you’re going to put your opinions online, it’s going to piss somebody off,” she admits. “I tweeted, for example, that I was donating to a kitten rescue. And someone wrote back, ‘What about pigs? Here’s a link to help pigs, no one’s helping them.’ And I was like, ‘Jesus Christ, man, I’m only one person. Let me just save some fucking cats!’”

When she’s not busy saving kitties or attending to band business, the singer likes nothing more than relaxing in her PJs and bingeing on box sets, just like everyone else. It’s when New Years Day are gearing back up for action that she really comes alive, however, and a life on the road, while hard, is one that she loves.

“One of the reasons the album took so long is that we decided that touring was a priority,” she says. “We said that if an amazing tour was offered to us, we’d do that and then make the album after. The problem was, we kept getting offered incredible tours, one after the other, and it was a case of, ‘Seize the day, let’s keep going.’ This has been my life consistently for the past 10 years, so I don’t really know any other way of living, but I thrive under pressure. When there’s not much going on at the end of the album cycle, I start to feel down. When there’s a lot going on and it’s all ready to explode, that’s when I feel most like my true self.”

With the band’s new album having dropped and recently completing their first ever U.S. headlining tour, things look all set to explode once more. And perhaps for the first time, the real Ash Costello can finally enjoy it all.

"I Do All Kinds Of Illegal Things, I Love Breaking The Law": 13 Questions With Ash Costello