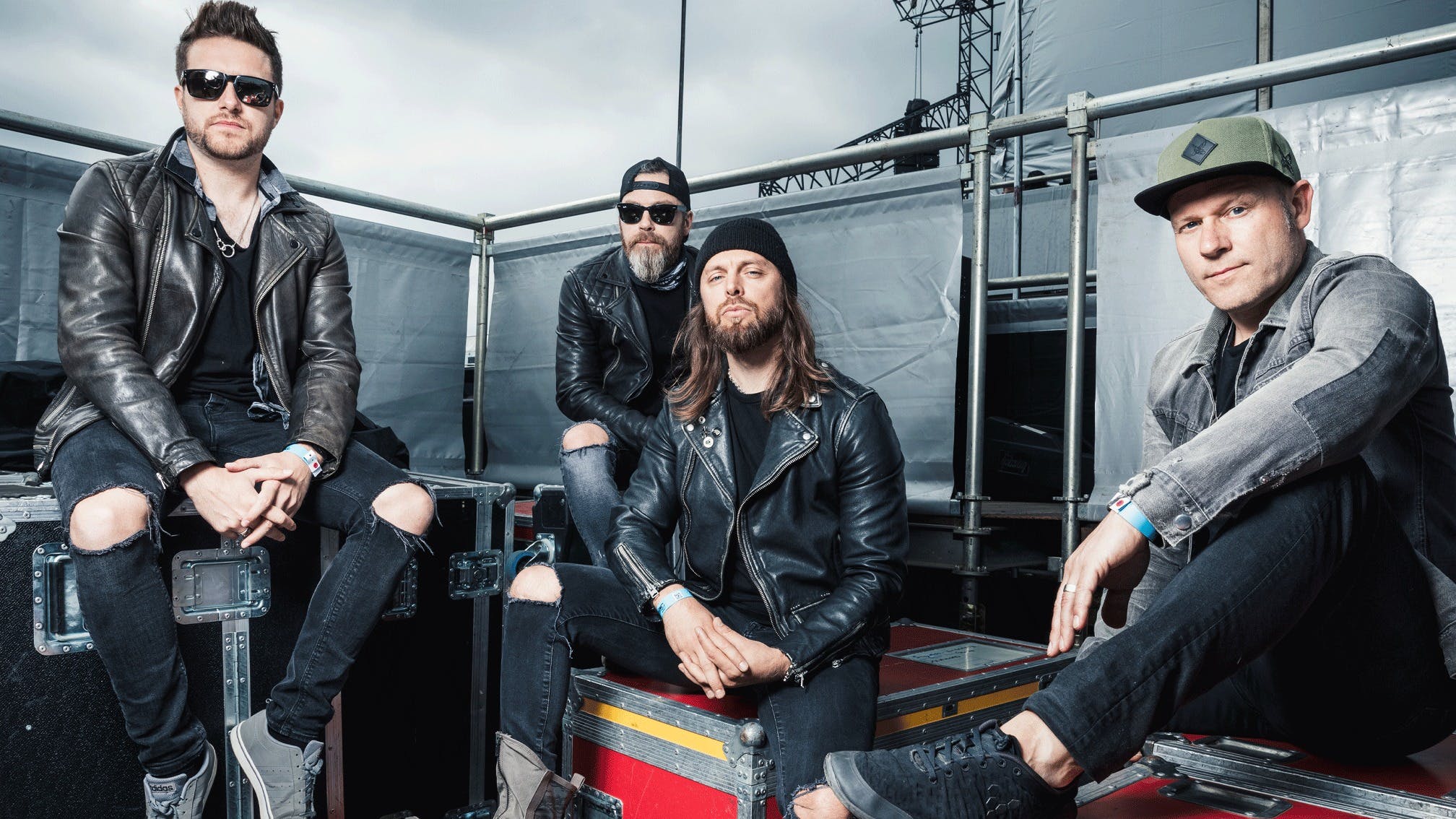 From talent shows, to supporting Guns N’ Roses, to doing Wembley and headlining Download Pilot, Bullet For My Valentine have had a hell of a journey. Matt Tuck even played jumping from a chopper in the Arctic Circle. As they prepare for another massive summer of shows, the frontman traces the story of the Welsh metal titans through the gigs that made them…

“We’d already done a few gigs in pubs and clubs in The Valleys, so it wasn’t our first show in front of an audience, but it was a big deal for us at the time. It was a local talent show at Porthcawl in south Wales. We were a three-piece band playing really heavy covers at the time, and we didn’t think it would be appreciated with the style of music and the energy and the volume. It turns out it was, and we actually won the talent contest. It was great! It gave us a real boost of confidence and gave us that motivation to carry on.”

“We played a lot of shows in the early days as Bullet, but one important one was at the Camden Barfly when we had record company A&R there before the band got signed. That was a pivotal moment for us. We knew they were coming down, and it felt like we were on the cusp of achieving what we’d worked so hard towards for six or seven years at that point. It was quite surreal. It was very nerve-wracking, but at the same time being that young and focused on what we wanted to achieve, it felt like our moment. It was far from a perfect performance, though. It was rough, the sound was trash, we didn’t really play very well, but there must have been something about it that allowed some people to see a potential in us.”

“We’d played another show at the Barfly in Camden, then we got in the van, drove up to Donington Park that night, and arrived at about 4am on no sleep. We were just so excited, we parked the van and it was actually next to some Metallica limos. None of us slept that whole night, then we played at midday the next day. It was phenomenal. I think we were running on fumes at that point, but if anything that just added to the intensity of the day. We came offstage exhausted but elated. We then became like the Download house band. We played three years in a row, and again after that in 2008. That first performance was as an unsigned act as well; we didn’t have a deal, we didn’t have anything out, it was all off hype and word of mouth. From there, things exploded pretty quick after the release of the EP [Bullet For My Valentine, November 2004], then less than a year later our first album, The Poison, came out, and it was all guns blazing by that point.”

“That was our first experience of getting on a real professional tour, that run with 36 Crazyfists and Eighteen Visions, who were Roadrunner bands that we grew up listening to. All of a sudden we were sharing a stage with them every night, and it was fucking amazing. We were in a transit van that wasn’t even converted into a proper tour van, but that’s just how it is for a lot of bands starting out. It was rough and ready and cold and uncomfortable and tiring, but none of us whinged for a second of that entire tour. We were just so excited to be on a proper, big UK run. It was a really good introduction to how touring is – it was tough and it was a lot of hard work, but we loved every second of it.”

“We supported Iron Maiden in America and it was definitely a jaw-dropper at the time. We’d already played some shows in the U.S. off the back of the EP, and that was surreal. We were picking up momentum and doing well in the UK, so just being on a plane to somewhere new was exciting. We’d gone from the Barfly to these huge arenas with Maiden in a very short space of time. It was too mad to take in properly, so we just took it in our stride and did what we were told to do when we were told to do it! But playing with bands like Iron Maiden, we were learning all the time – from how to enhance our performance, to how to engage with the crowd, to how to deal with rowdy audiences that maybe weren’t fans of the band. It was a steep learning curve, but enjoyable and a real positive experience in every way.”

“It was two shows at the Hammerstein Ballroom, an amazing venue right in the middle of New York City. I don’t know how or why, but we got the call saying, ‘Guns N’ Roses want you to come to New York and do the shows with them.’ ‘Okay, cool, I guess we’re going to New York!’ I just remember walking through the stage door into the venue and Axl Rose was onstage singing Welcome To The Jungle, soundchecking, and it was just like, ‘Holy shit!’ The crowd really enjoyed what we did. Obviously we’re very different, musically and stylistically, to Guns N’ Roses, but I think the whole event was such an amazing thing that people were stoked to be at, and thankfully they welcomed us rather than heckling and booing us!”

2006Getting onstage with Metallica

“This was also during that crazy Poison rollercoaster. Metallica invited us to come and play a show with them in Estonia, which was amazing. I think it’s still our biggest gig to date that isn’t a festival – there were 100,000 people there. We did our set, and then half an hour later we got a knock on the door saying, ‘Do you want to go up with and play [Anti-Nowhere League cover] So What? with the boys tonight?’ It was very special because Metallica were the reason I picked up a guitar and wanted to be in a band. They’re still one of the biggest influences on me, so it was one of the biggest disappointments when we had to miss playing with them at Wembley Stadium. We’d been invited, and a couple of weeks before was when I had to go in and have my emergency tonsillectomy. That was hard to take, but my health came first, and it was something that couldn’t be avoided.”

“We’d had lots of experience of playing large stages thanks to the support slots we were gifted by all these amazing bands. At that point we had three-and-a-half records out, we’d been touring for five-plus years on festival stages and arenas all around the world, so we just felt we were ready. It was scary, but we really felt it was a landmark moment for us going from Barfly to Mean Fiddler to Astoria to Brixton Academy. It was this ascendency that just didn’t stop, and then we were playing Wembley and Cardiff Arena and Manchester MEN Arena and all these places. It was like, ‘Fuck, we’ve done it, we’ve achieved what we set out to.’ One downer was that [former drummer] Moose couldn’t make it. At the time I didn’t know who Jason [Bowld, current drummer, who filled in on the tour] was. He was a recommendation from our tour manager. We called him up, and I think it was honestly about two or three days’ notice, tops. He learned the set, we had no rehearsal, we just went through a bunch of stuff in the dressing room on the day, we went onstage and we smashed it. We were very lucky. He saved the day.”

2016Performing while jumping out of a helicopter

“Jägermeister did these kind of mad collaborative performances and they asked me to do that year’s Ice Cold Gig. I was told: ‘They want you to jump out of a helicopter with a guitar, playing on the way down, continue playing on a speedboat across a fjord, then jump on a husky sled and carry on up into the North Pole.’ So I did! And it was as weird and as wonderful as it sounds. It was a huge operation; the Norwegian government was involved because of the complexities involved with jumping out of helicopters over the Arctic Circle! If anyone reading this hasn’t seen it, it’s all online. It was all filmed and documented and it was unreal. It was probably the most exciting adrenaline-fuelled day I’ve ever had and probably ever will have in my life. It was mad!”

“Headlining the Sunday of Download Pilot felt like the past 20 years of my life at that point just came to fruition. It was a dream come true. We’d never been shy of saying that one day we want to be up there headlining Download. Yes, this wasn’t the all-singing, all-dancing version, but for us it was still a moment and it still proved that we can go out there when called upon and deliver. We were so grateful and honoured to be asked, and just because of the event itself and the 18 months the world and especially the music industry had gone through at that point, it felt like an amazing opportunity and a huge responsibility all wrapped up in this crazy ball of excitement. We put everything we had into that show. There was no budget for a big production – it was what it was – but we went out and did what we needed to do and walked away proving a point that when that time comes, we’re ready.”

Bullet For My Valentine play PRYZM Kingston on May 24, and Malta with Bring Me The Horizon on May 26. This article was originally printed in the March 2022 issue.