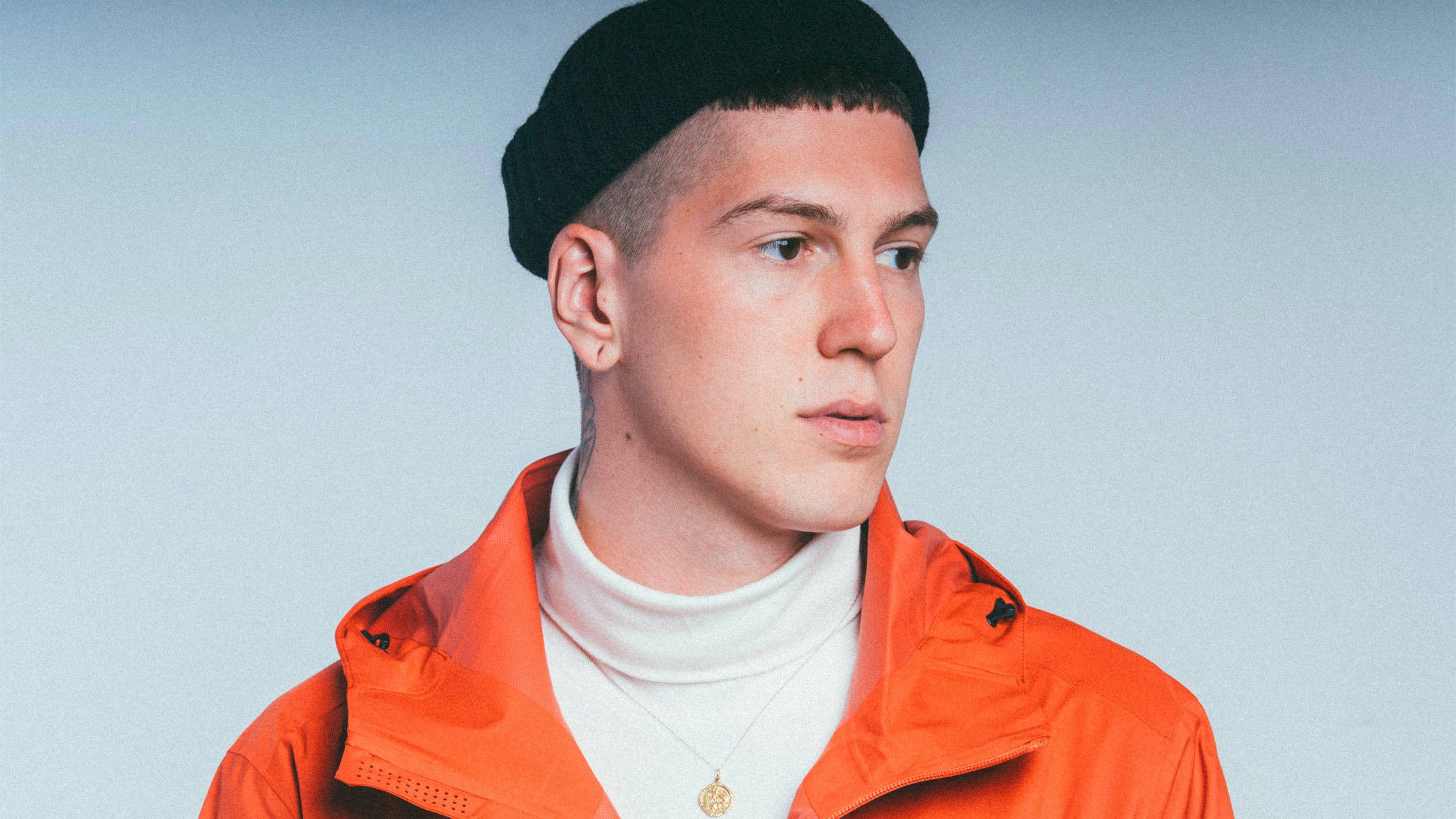 For a man in his late 20s, John Floreani has lived through more than most people twice his age. Not all of it proudly. Scenes from an unsettled past were the backdrop to last year’s The American Dream, the third and breakthrough album from his New South Wales band Trophy Eyes. Armed with a candid nature and a pitch-black wit, the frontman alluded to a journey filled with bad decisions and bad drugs; the song You Can Count On Me included the immortal line, ‘Thanks to everyone that bought tickets to my shows, I put all the money that you spent right up my nose.’

For the past five years, John has also had his occasional solo side project, Little Brother. A primarily acoustic venture, it has been a place for the ideas in the singer’s head that didn’t fit the shape of Trophy Eyes’ punk-rock songs. Now trading under his own name after learning of the North Carolina rap group also named Little Brother, he is about to release his debut album, tellingly titled Sin, with influences ranging from EDM to backwater country. The record also sees the Australian delve further into his own story. It starts with Oh Brother, an acoustic heartbreaker about ending an unhealthy relationship with his sibling, and one that John promised on social media would make fans cry. We joined the singer so that he could tell us more.

Hi John. Tell us about how this project started.
"Well, I’ve been doing it since probably 2014, a long time ago. I wrote a little acoustic song that was going to go on Trophy Eyes’ first EP, Everything Goes Away, and it didn’t fit. With Trophy Eyes we wanted to be fast and aggressive and punk rock, so we canned the song. It was called The Distance, and I ended up filming it in my manager’s basement, and we put it out on YouTube. We didn’t properly record it until, I think, two years after that.

"It wasn’t ever a serious thing. It was just the songs that I liked that I didn’t want anyone to mess with, or songs that Trophy Eyes didn’t like that I would remake into acoustic songs. I’d never taken it very seriously, but then all of a sudden people really liked the songs. So I just kept writing…"

It must give you an opportunity to be more adventurous than with Trophy Eyes?
"Yeah, definitely. It’s the idea of creating without a boundary, creating without the idea of someone not liking it or liking it. It’s just writing songs for songs. That gave me so much freedom. I know this record’s not even out yet – but maybe the next solo record might be a rap record or a country record, or whatever. It’s total creative freedom."

What shitty things are you referring to?
"I grew up in a small town and there wasn’t a lot out there. It’s kind of pre-internet, like the dial-up days with no phones, and, yeah, lots of parties and hanging out with just the wrong kind of people. Eventually it got really out of hand. There was big trouble with police and really life-altering shit. Some of those things are quite drastic. I won’t go into it now because it’s kind of deep and intense, but listen to the songs and you’ll hear."

Could you explain the story behind the record’s opening track, Oh Brother?
"It’s probably the most personal song I’ve written to date. Me and my brother and my father had a very strange relationship and upbringing. There was a… I wouldn’t say violence, but in the house it wasn’t all rainbows and flowers and puppies, I guess. My brother, I think, suffered [from that], and we grew up together him being very lost and angry at things that he didn’t know why. He was actually a bit of a hot mess. And I was kind of the only person in the world that could relate to him and understand why because I went through the same thing.

"Just recently, we had a big falling out. And I said, ‘After all these years, I’ve been your best friend, but now no more, because you’re doing what dad did to us, to me.’ That’s kind of where that song came from. Just realising that although people say family is important and family’s everything, it’s more… you judge your family on merit, not because they’re related to you. So one day I realised: you’re a shitty guy and… the end.

Another personal moment, Before The Devil Knows I’m Dead, sees you dealing with the idea of not going to heaven. Could you elaborate on that?
"Well, I grew up Catholic – my family are Italian and Irish. But [my girlfriend] Bianca is Catholic and practices still. And I would consider myself a nihilist, or at least an atheist or agnostic atheist. Existential pagan. I don’t know, whatever the fuck you please.

"The song is about how she’s a good person. She’s pure. She’s happy. She’s kind. She’s never had a bad thought about a bad thing. You know that weird American song? [Tom Petty’s Free Fallin’] ‘She’s a good girl / She loves Jesus and America too’? She’s the epitome of that. Like, she’s from Texas, full Southern belle. And I’m… I’m me. So it’s just a thought that popped into my head. Does it bother her that I won’t go to what you think is your afterlife? I wouldn’t be there. While kind of repenting at the same time, I guess."

What are you searching for in these songs? Redemption?
"No, not redemption. Just the story is important to me. That’s it. I like a good story. I find the little moments and the little things that happen in my life poetic and beautiful sometimes – the drama and the chaos. I’ve always been fascinated by that whole Americana, Bruce Springsteen thing; just a guy, just an average guy and his little stories in his pursuit of a nice life and a white-picket fence. I guess [that’s what] the record’s about: just your average late-20s man and all the shitty things he did in his pursuit of the dream."

You’ve spoken previously about Johnny Cash being an influence for you. What traits do you admire in him?
"I admire that at the time, you know, if Elvis were to gyrate his hips, it was deemed not okay for TV. That world that they were living in was super controlled. Nothing rude, nothing sexual. Everyone was very normal and behaved, and Johnny Cash kind of came out of nowhere as ‘the man in black’, openly addicted to drugs, and said some crazy fucking shit. He saw himself as a representative for the beaten and the broken and the scarred. And relative to that time, that’s insane. No-one was doing that, no-one had thought of that, nobody had even thought to say the things that he was saying publicly.

"He was just a pioneer of getting into the dark side of life: depression, drugs, alcoholism. Even murder – in Cocaine Blues he’s like, ‘Yeah, I just shot my wife after I did a bump.’ That’s insane. It’s terrible, obviously, but it just hadn’t been done. I think that took balls. And also I feel like that man sometimes. I enjoy the darker side of life; I enjoy the emotional and the heavy things."

Is there anyone else that you look up to?
"I really love Bill Hicks, the comedian. The things he was saying were revolutionary. I love Arnold Schwarzenegger. Jeremy Bolm from Touché Amoré."

Why Arnold Schwarzenegger?
"He’s just a self-made success story. Just the power of his persistence and drive that he changed his life from some Austrian boy in the hills to, like, the governor of California. That’s insane. I suppose that doesn’t inspire my music, but they’re inspiring personalities and figures in my life."

You recorded Sin in Thailand, what impact did that make on the record?
"The way of life there is cool. I’m a big believer of just small, little life things and using that as inspiration. Writing this record, I could just jump on a scooter at nighttime, ride down to the beach, buy myself a beer and watch a family fishing for squid off of a jetty, and they’re all laughing and having a great old time. That just does something in my head, and I go, ‘Oh, shit!’ and I run back to the studio and it’s there waiting, and they’re like, ‘Do you want to track?’ And I go, ‘Yeah!’ So yeah, it definitely influenced how that record sounds and how it came out."