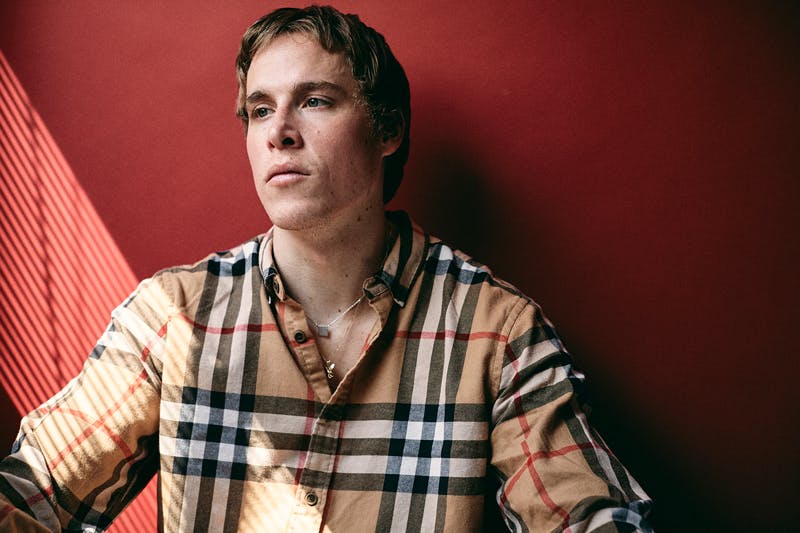 Parker Cannon tried to make himself disappear there for a while. For an extended period between 2016 and 2017 – an indeterminate time he struggles to pinpoint exactly – he cut himself off from everything. Living as a recluse alone in his one-bed apartment in Walnut Creek, California, he’d pass the time doing a whole lot of nothing at all except getting high on hallucinatory-levels of cough syrup and pills.

Since April 2013, The Story So Far vocalist hasn’t done any interviews, leaving the world to largely draw their own conclusions about who he is and what he must be like. And you don’t have to look too far to see how much the court of public opinion duly obliged. A series of high-profile incidents – a scuffle with heavy-handed security on Warped Tour 2014, and kicking a fan off stage in 2016 for taking a selfie – even attracted tabloid press attention, helping to shape a one-dimensional, caricatured image of a boorish Neanderthal who preferred to speak with his fists. It’s no wonder he just wanted to be left alone for a while.

“I was doing my best to disassociate and disconnect from everything,” he confesses, breaking his silence for the first time in five years to speak exclusively with Kerrang!

“I fell so out of whack, into this huge downward spiral. I didn’t talk to anyone or do anything, I was so lethargic. I was kinda flailing, and I felt so low despite being high all the time. I guess you could call it a personal crucible.”

READ THIS: "It's important to reach towards kindness" The Wonder Years' Dan Campbell

In reality, The Story So Far vocalist probably just needed to hit pause for a while. He’d been in the band since the age of 17, and later dropped out of community college after a year of studies to hit the road and concentrate on touring full-time. Since their 2011 debut album Under Soil And Dirt exploded and made them pioneers of a then-burgeoning pop-punk resurgence, Parker, bassist Kelen Capener, guitarists Kevin Geyer and Will Levy, and drummer Ryan Torf played live and trekked across the globe for almost six years non-stop. That serious graft came with enormous success – making The Story So Far the hottest ticket in pop-punk, especially in the U.S. – but the wide-eyed kid who’d traded academia for circle-pits had become cynical and jaded by the scene he grew up in. Something had to give.

“I didn’t want to be pigeonholed as Mr Pop-Punk,” he admits. “I didn’t like that at all. I didn’t listen to it, even though I was playing it. That [image] was something I didn’t want yet everywhere I went I was that. So I thought, ‘Maybe if I close off, maybe if I just disappear, I can be someone, not necessarily better, but someone new.’”

Today, Parker Cannon is 27, living in Oakland, and he’s making strides to be happier and healthier, as he speaks publicly about his band’s new album, Proper Dose – the first of their records he says he’s ever felt excited about. As striking as the songs contained within, it’s a remarkable turnaround and transformation.

At every step of the way in his life so far, Parker has had it all. The middle sibling of three boys, his childhood in Walnut Creek was filled with fun, family, friends and a strong sense of community; the kind that’s typical of the safe, idyllic suburbia that only seems to exist to outsiders on American television. But when he finally came home from years on the road with The Story So Far, everything was different. His parents had relocated to Texas, a lot of his old friends had also moved away, or they were working day jobs, drinking heavily or doing cocaine (“I don’t really mess with those kinds of drugs,” he stresses). All of a sudden he struggled to assimilate back into a world he didn’t recognise. The biggest change of all, though, was the one within himself.

“Nothing to do, lots of time and lots of money was not a good equation,” he says laughing about the circumstances surrounding his downfall. “I got myself an apartment, because I just needed to chill out for a second. I’d had too much of touring, too much of music, too much of everything. And it led to me getting high everyday, trying and failing to achieve the same intense high that I’d felt playing live during what were the best years of my life.”

READ THIS: "Getting arrested politicised me" Laura Jane Grace

Simply put, Parker was aimless and lost, and in trying to do something about it, he only cut himself further adrift and heightened his sense of alienation.

“I think it was a way of me rebelling against that normality,” he considers. “It was the burnout mixed with coming home and not being able to relate to that perfect little suburban area that I grew up in; trying to relate to my friends and my family and not being able to, feeling so different from them and honestly, being so different from them. Travelling makes you different, it skews things.”

Perhaps most concerningly, this listless lifestyle and lack of passion extended to his relationship with music.

“I was so stagnant that I started to really resent the whole pop-punk scene and all the bullshit that went along with it,” he explains. “Everything about it made me feel disenchanted. That was when everything turned… I don’t want to say ‘dark’, because there are a lot of people with struggles that are so much darker and I don’t want to paint it as, ‘Oh, I was going to kill myself!’ because that’s not the case. I just fell out of love with music. Really, I fell out of love with everything, pretty much.”

READ THIS: How Head Automatica killed the concept of genre

This naturally left the future of The Story So Far in limbo. Parker says the others shared his frustrations. They’d all grown up a lot, they’d all grown out of the style of music they’d helped to spearhead, and the subject of calling it quits was in discussion.

“We talked about it all the time,” Parker reveals. “Like, ‘What are we doing here? What are we as a band?’ I didn’t want to write about women or what I call ‘the infatuation hump’ any more. I was so over that part of my life. And honestly, I didn’t really have the content for it any more. I literally wasn’t hanging out with or seeing anyone. I was just this big ball of waste.”

Things inevitably came to a head eventually, prompting two of his closest friends to stage an intervention and lay down a few home truths. It was the wake-up call he needed, having not even realised just how far he’d descended when he was in the throes of everything. Somehow, he pulled himself out, and reflecting back on the experience provided the inspiration and spark of creative energy needed to move forward, personally and musically.

“It was like, ‘Holy shit, now I have something to write about,’” he recalls of that eureka moment. “For so long I’d been searching for a proper dose: of life, of music, of drugs, of whatever. It gave me this visceral energy, to just write and to really pour it all out.”

By necessity, Proper Dose finds the quintet taking several bold steps forward. It’s a record that might just raise as many eyebrows and hackles as it will fists, taking its musical cues from artists like The Beatles and Oasis, while redefining who and what The Story So Far are. Someone else can ‘defend pop-punk’ if they want – this lot are out. But that’s not to say they’re shitting all over prior achievements or the fanbase they’ve built.

“I don’t want to look back on our past and frown,” Parker insists. “I want to look forward and smile. I want to have that legacy and create this whole new one.”

And in their attempts to strike out and forge new horizons, there’s hope a receptive audience will come with them. But if not? Well, Parker believes that people will at least respect them.

“We’re just trying to grow and become a real band,” he argues. “There are a lot of people out there who still deny us, because of the subgenre we’ve been locked in for the past few years, but I think that with this record, those people can’t deny us anymore. They can’t deny us being a good band, being a raw and real band, doing what we want and attempting to be better.”

Bullish and buoyed as he may feel about the band’s future, his own recent past is still too close to the surface to allow him to get too carried away just yet. He’s taking the recovery process seriously – one step at a time, rather than setting himself up for another fall.