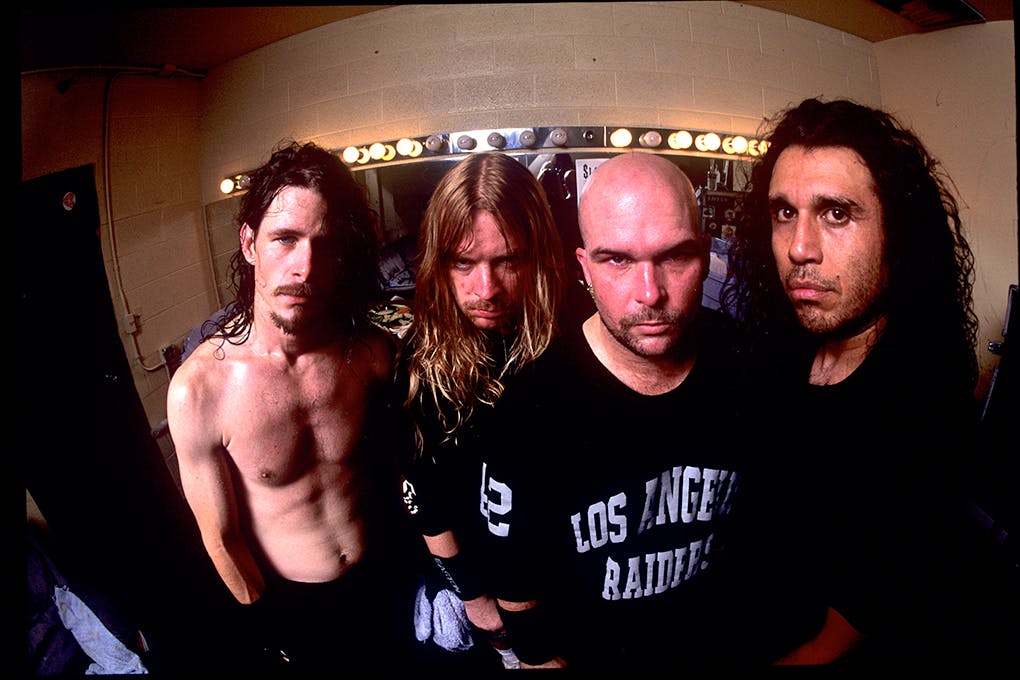 Since forming in 1981, Slayer have dominated the world of metal with their uncompromising sound and ugly worldview. During their 37-year, 12 studio album career, the band’s 1986 release Reign In Blood set the benchmark for thrash metal, a 29-minute explosion of searing riffs and impossibly intense drumming, cementing their place in The Big Four, alongside Metallica, Anthrax and Megadeth.

The band bid farewell to guitarist and one of its founding members Jeff Hanneman, who died of liver failure on May 2, 2013, but as an architect of many of the band’s greatest riffs, his legacy will live on.

After almost 3,000 shows, the Californian quartet will kick off their final North American tour in San Diego this evening with guests Lamb Of God, Anthrax, Behemoth and Testament. Here, as a salute to their incredible career, is our ultimate Slayer playlist.

1. Black Magic
Slayer’s 1983 debut album was steeped in occult imagery, from the caped Baphomet in leather undies, pentagram of swords to the frantic, Venom-inspired lyrics of evil that informed its 10 tracks. Black Magic remains a highlight some 35 years later; Jeff Hanneman and Kerry King’s buzzsaw riffs are underpinned by Dave Lombardo’s rapid-fire drumming. Araya’s vocals might sound like they were recorded in a bin, but look out for his high-pitched scream at 2:16. Bloodcurdling.

2. Hell Awaits
The band’s second album was a far more polished affair than their debut; the title track begins in a suitably Mephistophelian manner with demonic groans and a solemn ‘welcome back’. There’s a deliberate, ominous riff which gradually builds and kicks into a brisk gear with speedier, face-melting solos while ‘demons feed the furnace where the dead are free to roam’. Things, it turns out, were only going to get faster, heavier and a whole lot uglier.

3. Angel Of Death
Reign In Blood, Slayer’s victorious 1986 half-hour pissing contest of who could play the fastest in the thrash scene (they won), opens with this controversial track penned by Hanneman. The title refers to Nazi doctor Josef Mengele who performed experiments on the prisoners at the Auschwitz concentration camp and details his some of his most sadistic acts, picked out from two books bought by the guitarist. The track led to the band being labeled Nazi sympathisers and in a 2004 interview with Los Angeles metal radio station KNAC, Hanneman incredulously responded: “When they read the lyrics, there's nothing I put in the lyrics that says necessarily he was a bad man, because to me – well, isn't that obvious? I shouldn't have to tell you that.” On a far lighter note, Araya’s piercing cry at the beginning spawned the unambiguous website tomarayascream.com.

4. Raining Blood
A chilling setlist staple, Raining Blood has been performed live 1728 times. Boasting one of metal’s most intense riffs, this remains one of Slayer’s finest moments. The song – which concludes Reign In Blood – ends with a minute of storm sounds. You know, the type of thing played religiously by tinnitus sufferers. All quite relaxing, until you remember that it’s fresh crimson hitting the pavement. In summary, tomorrow’s weather: Raining blood from a lacerated sky.

5. South Of Heaven
Released the month before Metallica’s …And Justice For All, the band purposefully slowed down – by their standards at least – after the all-out assault of Reign In Blood. Penned by Araya and Hanneman, the album’s title track boasts a foreboding riff and some powerful drumming from Lombardo. Possibly the only Slayer lyric to feature the verb ‘beget’.

6. War Ensemble
Why conjure up evocative images of Satan and the fiery pits of hell when a good old-fashioned military campaign can provide some very real horror? An absolutely chaotic track, Hanneman and King peel out fast as fuck riffs while Araya barks ‘the final swing is not a drill, it’s how many people I can kill’. Fun fact: if you ever play this on Guitar Hero, you’ll wreck your controller and your wrists. Unless you’re single.

7. Dead Skin Mask
In November 1957, a police search of Ed Gein’s property found a house of true horrors including trophies made of human skin, including masks and a waste paper bin. It was inevitable that The Butcher of Plainfield would provide grisly inspiration for Slayer at one point. This Seasons In The Abyss highlight was penned by Hanneman, with lyrics by Araya who gets into the notorious serial killer’s fractured mind with lyrics like ‘graze the skin with my finger tips, the brush of dead warm flesh pacifies the means’. Once Slayer hang up their instruments for good, the frontman can always count on earning a bit of pocket money writing verses for greetings cards.

8. Stain Of Mind
From the 1998 album Diabolus In Musica, Stain Of Mind is aggressive, but sacrifices pace for a bouncing riff that roll along like White Zombie’s Thunder Kiss ’65. This single is notable for the lyric 'death becomes your bride’. Imagine the honeymoon. Upsetting.

9. Disciple
This GRAMMY Award-nominated track appears on God Hates Us All, which was released on September 11, 2001. It has the oddly prescient line ‘pessimist, terrorist targeting the next mark, global chaos feeding on hysteria’. It has all the hallmarks of a Slayer classic, with one of Araya’s most powerful vocal deliveries, slathered in piss and vinegar.

10. Skeleton Christ
Released in the summer of 2006, Christ Illusion saw a return to their earlier, frantic pace. Skeleton Christ is a scathing rant against organised religion, as Araya yells: ‘Life's too short to be focused on insanity, I’ve seen the ways of God, I’ll take the devil any day… Hail Satan!’ It’s boisterous, deathly chug, played in a Drop B tuning, adds to its sheer brutality.

11. Psychopathy Red
Taken from the band’s 11th studio album, World Painted Blood (2009), it was to be the final release to feature their classic line-up of Araya, Hanneman, King and Lombardo. Another song about a serial killers, this time looked at Andrei Chikatilo, the Butcher of Rostov, who confessed to 56 murders and was executed in 1994. The pace and delivery is in the vein of Angel Of Death, but even faster and more aggressive than before.

12. Repentless
The title-track, take from their 12th and now final studio album, features Exodus guitarist Gary Holt replacing the late Jeff Hanneman and Paul Bostaph on drums. It’s a maelstrom of lighting riffs and frantic drumming as Araya yells: 'Intensity, anarchy, hatred amplified, playing this shit is all that keeps me alive’. How the band will fill the void after their farewell tour world concludes is anyone’s guess.