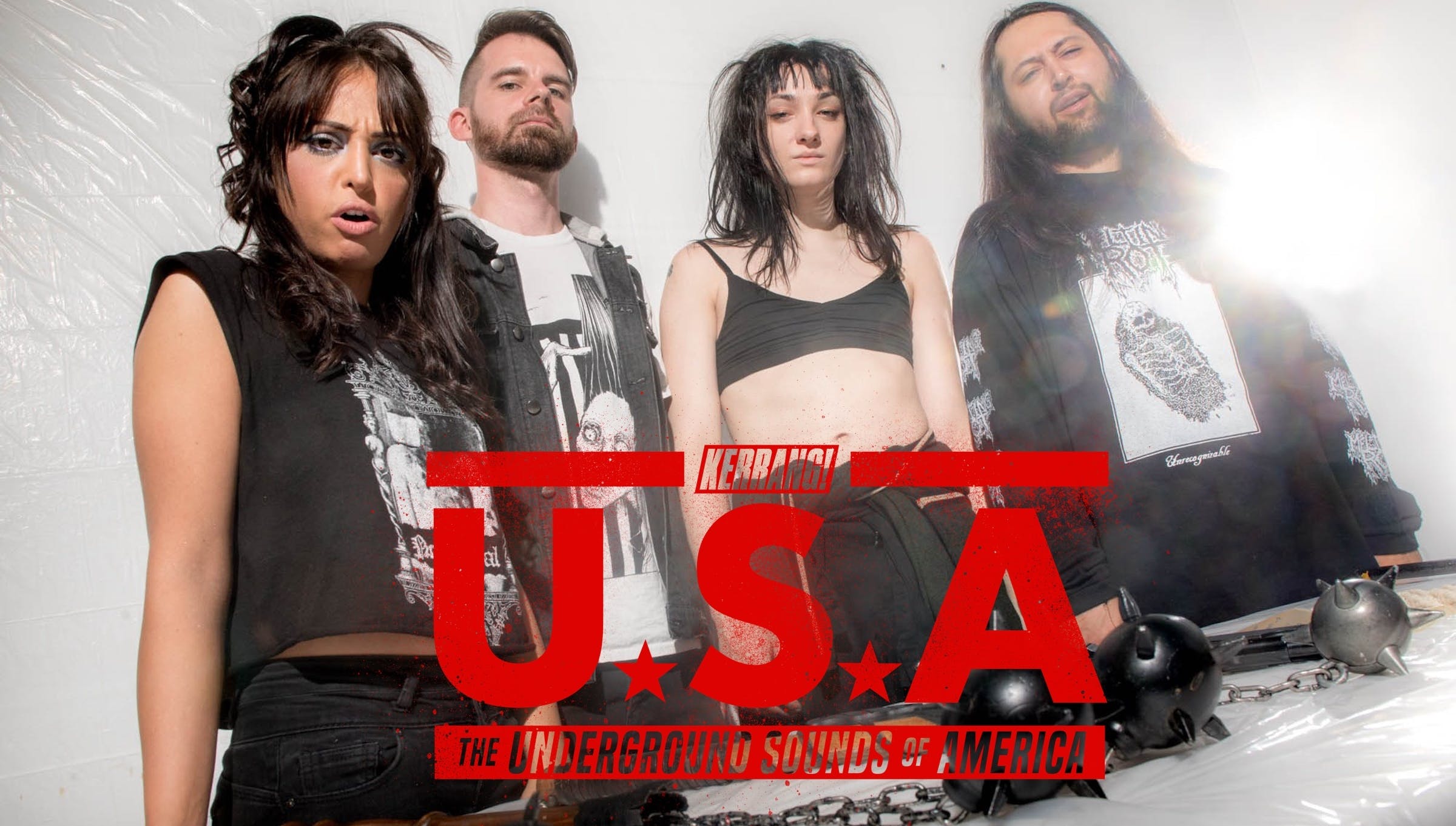 While their music may be unbelievably hostile, Escuela Grind is all about the love. Sure, the upstate New York quartet play the kind of short-sharp-shock death-grind that would blow the wigs off of casual listeners, including furious blastbeats, seasick riffs, and howled vocals that seem tireless in their constant assault. But in the tradition of the genre’s forefathers, Escuela Grind’s music is more reaction than offensive, and the members want to be a force for unity across music even as they sound like they’re tearing a human being apart. Though this is unsurprising given the other outfits band members have been in -- including Kill The Client, Hearse, and Your Brain On Drugs -- it’s refreshing to discover that they want to expand the grind scene rather than dig further into its genre burrow.

“One of our goals as a band has always been to promote inclusion and acceptance,” explain Escuela Grind jointly. “Sometimes in this modern grind scene, there can be so much gatekeeping, invalidation, and dismissal of unique members; we just want to help destroy that. We have played some of the craziest mixed bills: shows with OG rappers, bedroom pop, gore, harsh noise, afro-futurist electronic, metalcore bands...you name it. To be honest, these shows have been some of our most memorable and we have made so many friends. Grindcore is surprisingly universal in our experience, so we would like to see more mixed bills!”

This attitude runs throughout throughout the band’s upcoming new album Indoctrination. The record is a blistering rager, packed with 17 compacts bursts of unthinkable sonic rage that still manage to keep the listeners rapt with their density and dynamics. And while the cover art is the kind of image that evokes both thought and disgust, and song titles like Incel Circle Jerk offer a snickering middle finger to those the band despise, these also contain a thoughtfulness and an aggressive societal acceptance that make Escuela Grind’s misanthropy as enjoyable and intelligent as it is unending.

“To us, it's of the utmost importance to see members of the transgender and nonbinary community, people of color, females, queers, and other under-represented people with a platform, so we try to make the most of what we've been given,” say the band. “We also implement crowd-work elements from rap shows we have played, like call-and-response methods. It’s almost in the same way that rap shows include punk elements into their world now; they create mosh pits and convince the audience to do walls of death, and we’re with it. Even if it’s simple, people look forward to being able to participate. Unifying moments like chanting ‘FUCK I.C.E.’ or ‘GRIND IS LOVE’ with the crowd even gets bystanders who aren’t into moshing to let out some pent-up energy. It’d be awesome to see more bands do that. Sometimes it’s easy to forget that we make extreme music as an outlet for the realities we are all dealt with.”

READ THIS: 5 up-and-coming U.S. grindcore bands who should be ripping your guts out right now

Before listening to an exclusive premiere of Escuela Grind’s new track, we sat down with the band to find out what pours fuel on their righteous fire.

1) If you had to play a newcomer one Escuela Grind song to introduce them to the band, what would it be and why?

We would definitely have to play the song that we are premiering right now, Zalongo. Great mix of grindcore, hardcore, and powerviolence lyrical inspiration.

2) Does being from upstate New York, or the East Coast in general, inform your sound, and if so, how?

While we started the band in upstate central NY, we actually are all from different places. There was no proper 'grind' community in Ithaca, so we played mixed bills, toured, and created a more inclusive extreme music scene in the college town we were confined to. Kris [Morash, guitar and bass] and Katerina [Economou, vocals] are from the western Massachusetts/Albany area, but they are from two different music generations, so they were lucky enough to experience vastly different scenes on the East Coast. Jason [Balthazar Eldridge] is from Syracuse, and is the closest to where we started the band. It does seem like that upstate area, in general, was influential to all of us though the Hellfest DVDs growing up. Jesse [Fuentes, drums] is from Dallas, Texas, which has a much more diverse musical landscape, with favorite bands/artists like Insect Warfare, Kill the Client, Power Trip, DJ Screw, True Widow, Pinkish Black, Hatred Surge, Mammoth Grinder and Mr. Pookie. In general, we have been so lucky to have played alongside amazing East Coast bands, but our music tries to be nomadic in the sense that we pick up inspiration wherever it strikes us.

3) You guys obviously have various other projects under your belt -- is there something you can do with Escuela Grind that you couldn't do in your other bands?

In the bands before, writing was limited to specific constructs. Whereas this band limits itself at first with constructs, and then we tweak it and include different elements that aren’t from grindcore, powerviolence, or even heavy music as a whole. In Escuela Grind, death metal, hardcore punk and fight riffs are written over Prince and Nirvana drum beats. They tend to happen alongside traditional Terrorizer and Immortal-style blast beats, and then switch up with odd time signatures and change-ups that you’d hear in fusion jazz. That unlocks the crowd to dance the way they feel at the time, and the blastbeats allow for indulgence in a constant build-up. We’re able to write mosh riffs combined with blastbeats in this band, and you better believe that whenever we have a metalcore crowd, they kick super high on those parts. We don’t have to take ourselves too seriously, or put on a front with Escuela Grind, so shows are like a party, but with a mental safe space. It’s insanely therapeutic.

4) I see that Jesse recorded the album -- what were the pros and/or cons to having him handle recording duties?

Shit, the pros are so great! There honestly is nothing like being able to go into the basement and record whatever we want. To have the freedom, comfort, and time to be able to revisit recordings is invaluable. There is a total sense of ownership of the work when you’re able to be involved in every process of making a record. The cons are the learning curve, our lack of expensive compressors, pre-amps, and plugins. Professional producers can give valuable input, but we also trust our friend’s opinions.

The biggest con, however, is that we literally recorded and re-recorded the entire LP a few too many fucking times. It is never perfect, and we are our worst critics in that department. Every time there is a new mic, or interface, or we hear an unnecessary crackle, it's time to re-record, and that adds so much time to the life of the recording. But we wouldn't trade the freedom for anything. We’ve learned to appreciate the subtle imperfections with our four-part genre EP series that we are recording, the first of which, PPOOWWEERRVVIIOOLLEENNCCEE, we released in January.

READ THIS: The essential grindcore albums that everyone must own

5) Gotta love a song title like Incel Circle Jerk! Have you guys ever gotten backlash from conservatives online or at shows?

Surprisingly, conservatives steer clear of us online -- maybe we've jinxed ourselves by putting that in print, though...At shows, we've actually been able to start some really interesting conversations with people that have taken offense with our material, but truthfully this doesn’t happen too often anymore. I think people see the sincerity and emotion in what we have to say and realize that it comes from a good place. Specifically, mentioning anything about police brutality during the set would get our vocalist some unsolicited opinions from the crowd. Interestingly enough, we always chant 'The Public Education System Brainwashes Your Children!' during our set, and we have gotten love from so many public school teachers. We basically expect to meet some awesome school teacher now at every show, and we love that.

Listen to an exclusive stream of Escuela Grind's new single Zalongo below: