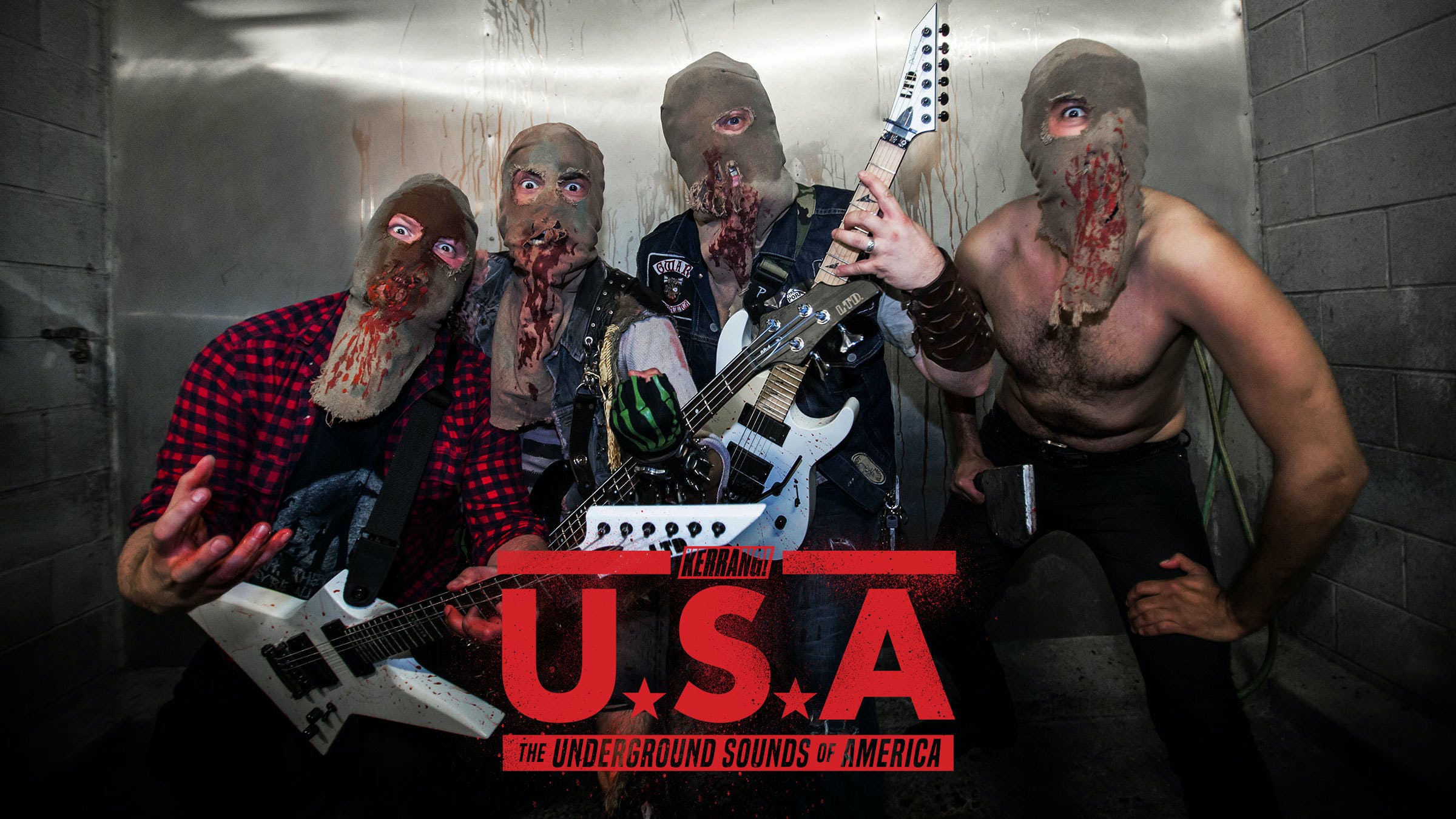 Nestled deep in the sweatiest crevice of Eastern Europe, "Creepsylvania" is a small but scrappy country made up primarily of hard-working turnip farmers, waste-disposal technicians, and gravediggers. But though Creepsylvania features a brutal military regime, a biker cult, a living voodoo deity, and as of late a fungus god from another dimension, the country's most popular feature is probably the four catacomb-dwelling cannibals that make up the band Ghoul.

Even if they weren’t masked murderers who live beneath a massive cemetery, Ghoul is worth any metalhead’s attention. The band’s brand of charging, stomp-along thrash metal channels old-school influences from both the Bay Area and Germany. Their skater-friendly ragers about fighting zombies and blowing bands with “-tion” in their name off the stage are the stuff of battle jacket wet dreams, and their live shows are slip-and-slide orgies of fake blood and dismembered robots. In a genre where so many musicians struggle to express their grimmer-than-thou philosophies or far-out politics, it’s good to know there’s someone out there classic speed metal songs about how they're going to fucking eat you.

One wouldn’t be surprised if Ghoul led metal’s first Creepsylvanian invasion -- if only they weren’t the only metal band in the country.

“Heavy metal is illegal in Creepsylvania, and anyone caught headbanging faces a stiff fine,” explains vocalist and guitarist Digestor. “There was a local traditional Creepsylvanian band, The Turnips, led by the great Ingvar Schmengy. Last I heard they were immured in a stone wall in [Creepsylvanian dictator] Commandant Dobrunkum's palace after he hired them to play his birthday party. Apparently he was contacted by ASCAP to pay royalties on the birthday song The Turnips played and it really cheesed him off. Gotta stick with those public domain birthday songs, boys!”

For a gang of masked psychopaths, Ghoul have become surprise darlings of America's underground metal and hardcore scenes. Their 2016 album Dungeon Bastards thrust the band shrieking and gibbering into the spotlight, landing them and their label Tankcrimes a first appearance on Billboard's Heat Seeker and Hard Rock charts. Meanwhile, the band’s kickass riffs and gore-soaked antics have earned them opening spots for bands like Cannibal Corpse and Gwar.

Thankfully, the fame hasn’t gone to Digestor’s head, and he remains as dedicated to Ghoul’s modus operandi as ever. “Music means very little to us, and we look at it mainly as a way to get insanely rich without having to do any work. Our real passions lie in the defiling and desecration of graves, cannibalizing orphans, and prank-calling local businesses.

Making a rare international exception for Creepsylvania’s finest, we sent a few questions Ghoul’s way, and received the following answers carved into a series of dead rats left on our doorstep.

1. If you had to play a new listener one Ghoul song to introduce them to the band, what song would it be and why?

I would probably play Ghoulunatics, off our Billboard chart-bottoming album Dungeon Bastards. It has everything you could want from a Ghoul song: guitars, drums, screaming, laughter, tears, half-assed social commentary, drums, guitars...you would have to look at least as far as the next song on that album to find a better example of what we do.

2. Who are your five greatest musical influences?

5) The screams of our moronic fans as they lie dying on the dance floor after we incinerate them with our white hot riffs.

3. Who would be on Ghoul’s dream tour?

Is Ghoul headlining? What's our guarantee? Never mind, I'll just answer and you can contact our booker after the interview. How about the headliner is Liberty and Justice-era Agnostic Front, then Ghoul as direct support, Where Monsters Dwell-era Engorged, and the opener could be a local, but NO MORE THAN ONE LOCAL OPENER. I also want Matt and Paul Magic to do sets between the bands. Can we talk about our rider now?

4. Is there a specific body part or type of corpse you like to eat before a show?

The jowls are an underrated cut, and our fans are more likely than not to have them in excess.

5. Do you celebrate Halloween in Creepsylvania?

Yes, but here we call it the Autumnal Equinox-o-rama Sale-a-bration. Every year we dress like chartered accountants and walk the neighborhoods of Creepsylvania begging for beets. Those who would defy our demands for the manganese-rich root vegetables are ruthlessly and mercilessly beaten until they bleed from the ears. None of this has anything to do with the holiday, but it's fun and it doesn't cost us anything.

Ghoul's Dungeon Bastards is out now on Tankcrimes. Buy it here.