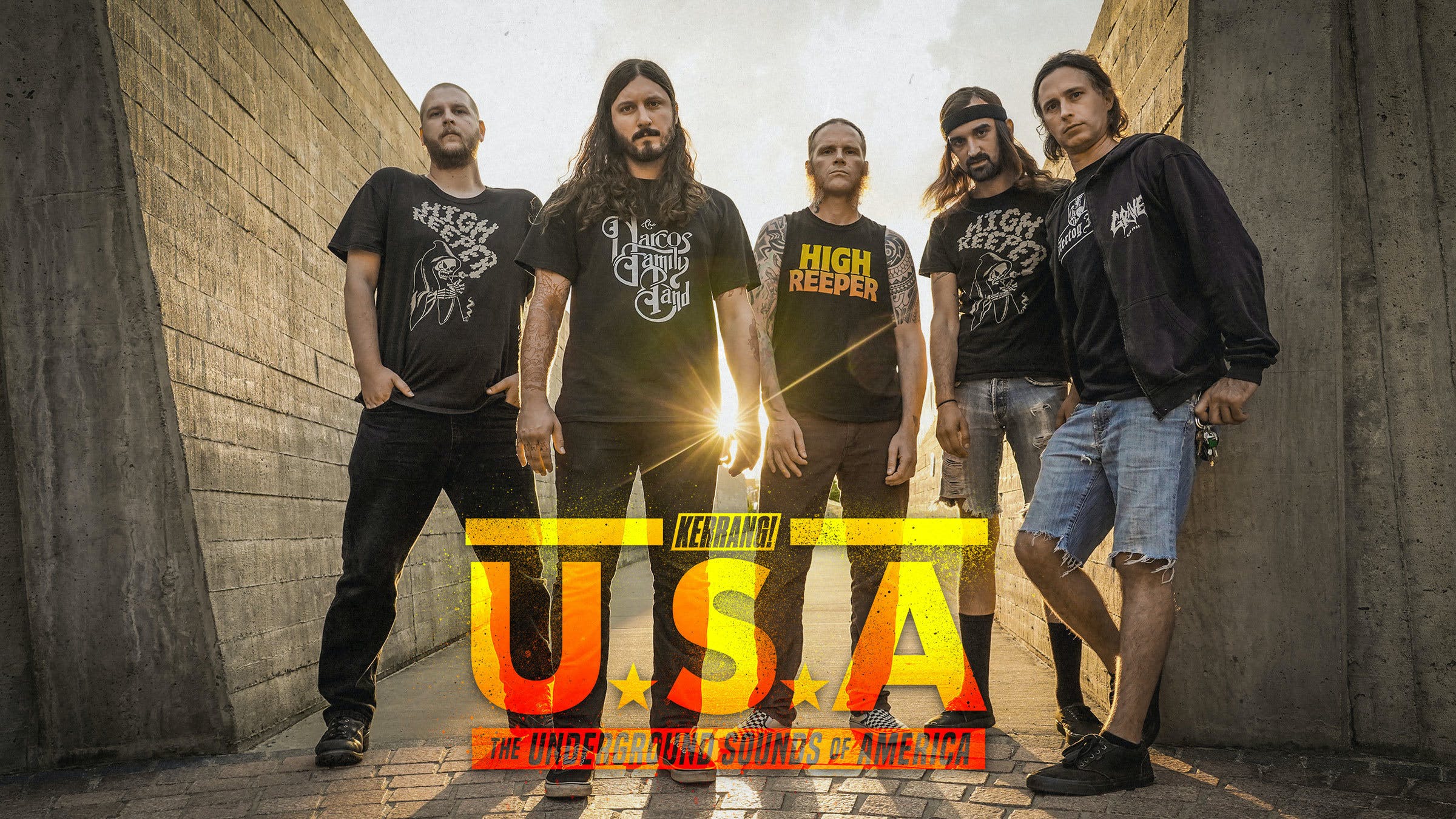 Deep down, most rock listeners fantasize about being the dirtbag pothead biker-nauts of old-school heavy metal album art, and High Reeper are here to feed that dream. The Philadelphia quintet’s slow, steely stoner metal channels a mixture of old-school styles, merging the head-bobbing rhythms of the ‘70s with the icy, growling riffs of the early ‘80s. The result is a racket that doesn’t sound like era of metal from the past, so much as all of them at once, an ur-throwback sound thunders down a non-existent highway in a time before you were always just staring at your fuckin’ phone.

That said, High Reeper aren’t focused on just retreading old ground; as one of the bands keeping Philly's snotty attitude alive, they're always looking to break new ground and inspire impressionable degenerates. But making music with old-school sensibilities that doesn’t just sound retro is difficult, and for the band, the production behind their music is what makes them stand out from the broad pack of tribute bands.

“We established some ground rules with this band and stuck to them,” says singer Zach Thomas. ”I think our song structure is what gives us a ‘classic’ sound but the recordings definitely sound modern. We didn’t want to make a record that sounds like it’s from the 70’s because it’s 2019. The recordings are huge and powerful and we have Shane’s vision and skill as a producer to thank for that.”

The band’s new album, Higher Reeper, takes this gameplan into orbit. The record is comprised of nine tracks fat with apocalyptic road dogs and barbarian worship, but the music’s polished production and the occasional tinge of Mike Patton on Zach’s vocals protect the whole thing from sounding like an attempt to recapture an era they weren’t part of. But most of all, a band like High Reeper thrives on huge riffs, and on tracks like Eternal Leviathan, Bring The Dead, and Barbarian, the Reep supplies listeners with such pendulous guitar parts as to make the listener wonder how they come up with so many giant bangers.

“That is an excellent question and one for which I have no real answer,” says bassist Shane Trimble. “All I know is that when we write we write a shit ton of riffs and toss almost all of them in the trash. It has to have a specific sound and when we get it, we know it’s right.”

“I will say that the challenge is once we get a big riff the next one has to be bigger,” adds Zach.

Fanning our way through the cloud of smoke, we reached out to High Reeper to find out what keeps their motor running.

1. If you had to play a newcomer one High Reeper song to introduce them to the band, what song would it be and why?

Eternal Leviathan would probably be my first choice. It has the big riffs of our first album but the attitude of our second and a nice little guitar solo to boot.

I think they’re all a little different which is important. I also think what we listened to while making the second album compared to the first was different as well. While making the first one we watched Black Sabbath’s live in Paris (which is actually in Brussels!) 1970 a ton. Motörhead’s Overkill was on constant rotation for me as well as Judas Priest’s Killing Machine. Side A of Killing Machine is one of my favorite sides of any heavy metal record. After our first tour I came home with an arsenal of new music I wanted to check out of the bands that we got to play festivals with (High On Fire, Eyehategod, Weedeater).

3) If High Reeper could organize their dream tour, who would be on it?

Oh man...well, my first choice would be Black Rainbows. We’ve been dying to play with them and Gab (Gabriele Fiori, head of our label and also singer/guitar player in Black Rainbows) knows it haha! I would also put Power Trip on there and Toke. Nightmare Logic is such a great record. Toke are everywhere right now, and some of my favorite riffs are coming out of that power trio. We got to play with Toke in Philly and they’re all super nice guys, would love to hit the road with them.

4) Is there a concept or recurring theme behind your new album?

I didn’t plan on it being about anything so I wouldn’t call it a concept album but it definitely has an apocalyptic theme that just came together naturally. We went through some lows during the writing process that reflected in the album. It starts with chaos and ends in the aftermath of that chaos. It never really resolves, there’s no happy ending. We’ll see what happens on the third.

5) What is the best item/surface on which to roll a joint?

Shit, man, it’s got to be the sleeve of whatever record you’re listening to. I think that’s really the only answer. Currently using Eternal Champion’s “The Armor Of Ire”.

Toss Your Hair Around To High Reeper's New Video

Watch the video for High Reeper's Bring The Dead from their forthcoming record, Higher Reeper.