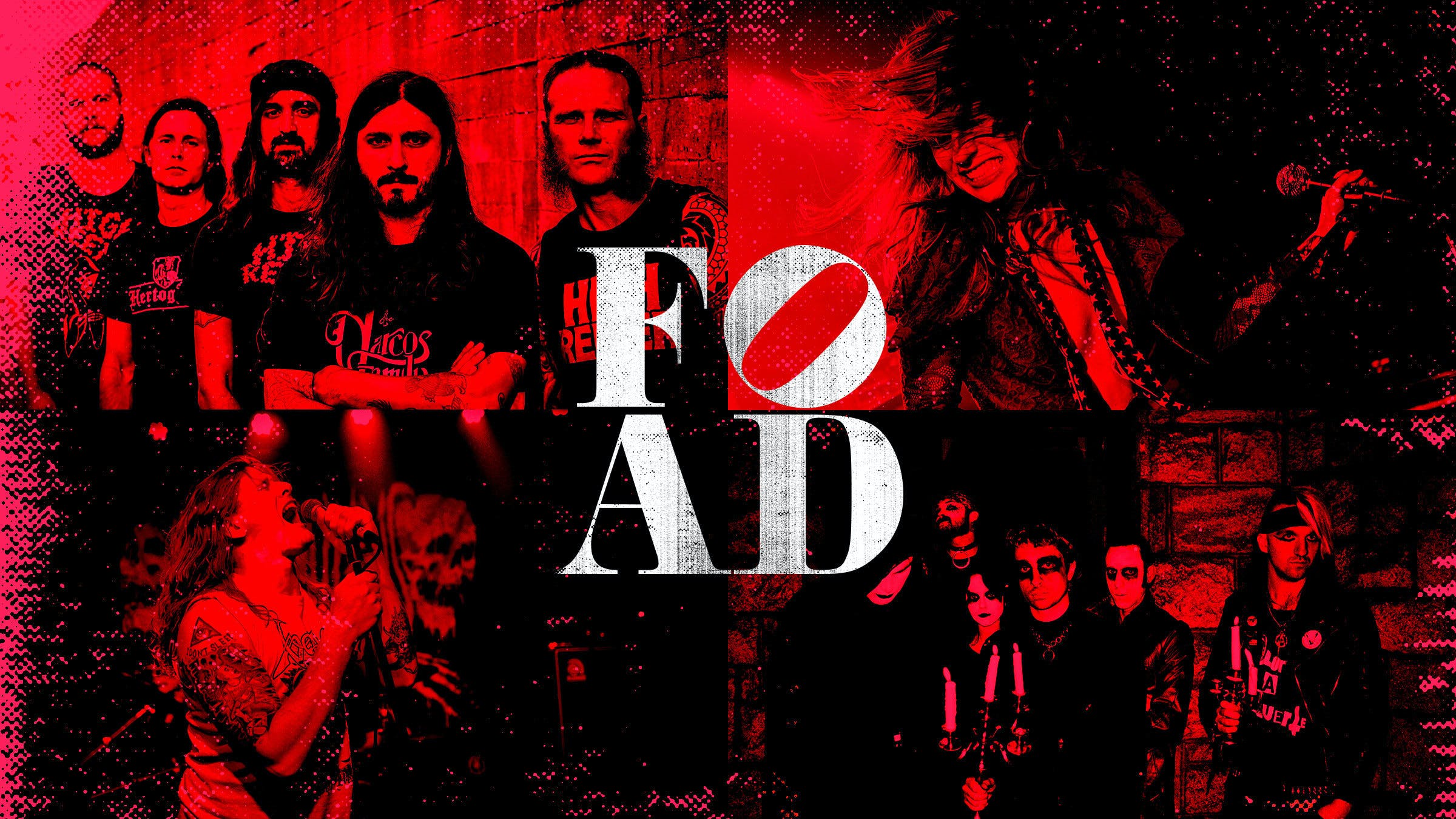 It’s important to remember that many of the people who foster an appreciation for rock and metal in a young fan’s life are, simply put, not very nice. The older brothers, scene legends, and rock bar locals that everyone loves usually pass on their vital musical knowledge through a mixture of peer pressure, teasing, and angry stories about shitty bands. While these trials by fire and long-winded grumble-fests can feel unnecessarily negative, they also add a sense of weathered attitude and hard-won experience to the act of becoming part of a community. The thick skin they impart makes rockers stronger, and give them a grittiness that sometimes feels lost in the polished, instant-access scene of the modern day.

In America, few cities embody this as much as Philadelphia, Pennsylvania. Though known around the world as the "City of Brotherly Love," Philly’s cultural identity is deeply imbued with saltiness, abrasiveness, and at times obnoxiousness, that many find hard to take. But this stereotype is brandished by its residents with pride, and bleeds into its music scene by creating hardened, guileless musicians and fans, who are all the more rewarding to befriend for their harsh edges.

“I think it’s absolutely, 110% deserving,” laughs Steve Jansson. As the guitarist for power-doom act Crypt Sermon and rising blackened thrash band Daeva, Steve has watched Philadelphia change since he moved here when he was eighteen, and while he loves the city, he entirely owns its reputation. “This is Philly in a nutshell: I saw a family with children and an infant in a stroller walk across the street, and this guy who blew through a stop sign was just honking and screaming at them. That’s Philly right there: I’m fucked up, I’m a dick, but it’s your fault. It’s an angry, working-class city.”

Where Philadelphia’s salty side comes from isn’t entirely easy to pin down. Perhaps it’s that Philly was America’s first capitol, and the city’s residents still feel that they was robbed. Maybe it's the frigid, unforgiving winters of America's east coast. Steve’s take is that it’s an issue of size and layout: “I’ve thought about this before...I think Philly has nicer areas, but I do feel like it’s for the most part more integrated than some cities are. You can be on a really nice block, but then you turn a corner and you’re in a war zone.”

Philly’s most notable musical output reflects its snotty vibe. Through the ‘80s and ‘90s, punk and hardcore were the most visible scenes in the city, a trait that remains true to this day.

“The Philly metal scene has always been interwoven with punk,” says Francis Kano, frontman for flippant satanic thrashers Devil Master. “We used to do a pretty good job of doing metal-punk shows, with mixed bills. Philly has this really weird vibe to it -- it’s always been a real gentrified place, but it’s also really dirty. People step outside of center city, and they can’t believe it’s the same city. And we’ve always taken pride in that griminess.”

Francis’ music certainly reflects his surroundings -- on their new album Satan Spits On Children Of Light, Devil Master add healthy doses of Japanese punk sneer and street-level glam to their rollicking black thrash metal. For Francis, that reflects not only the fun of heavy metal’s decadent days -- “That to me is the ethos of real satanism: living life to its fullest and not following anyone’s rules...and just being a cocky asshole!” -- but also a sense of realness that has always been vital to rock and roll’s rebellious attitude.

“It’s also that while everyone’s snotty, there’s an honesty in that,” he says. “People will be rude to their face, but they’ll get you a beer afterward.”

Though punk remained the bedrock of Philadelphia’s scene, over time more of its musicians branched out, bringing genres like metal, garage rock, and stoner jams into the mix. Now, in 2019, Philadelphia’s music scene has bloomed with a diversity of sound that other towns would envy. But at its heart, one of punk’s most important aspects -- a working-class DIY attitude -- has remained at the heart of Philly’s musical underground.

“[Philly’s scene] is still working class, it’s still very much DIY, and it’s still small,” says Zach Thomas, vocalist for doom rockers High Reeper. Though his band’s music is far too chill and weed-drenched to be immediately synonymous with punk, Zach is quick to point out how Philly’s scene retains a hardcore work ethic. “It’s a very tight-knit community, which is nice, because it’s still a major city. I feel like there’s always been a real grittiness to Philly. In the music scene, you’re building everything from the ground up.

“It feels very real,” he continues. “There’s not a lot of media there, not a lot of huge outlets to explore unless you’re playing shows. I used to live in LA, for example -- LA is a very easy city. If you’re connected, you don’t even have to play shows. You play one show and do your social media campaigns. It’s really about what you can do with the media. With Philly, the only way you’re going to be connecting with people is through shows.”

“It’s no bullshit,” says High Reeper bassist Shane Trimble. “It’s real. We live it. It’s informed by what we grew up listening to, and there is no pomp, no dress-up. Rock, in its most basic way.”

Shane’s pride in his hometown is admirable -- and yet, he’s quick to point out the city’s saltier side as well.

“Oh, absolutely, dude!” he cackles. “We killed the robot! There’s only one city in the country that’s going to do that!”

Shane's referring to HitchBOT, the delightful hitchhiking robot that was found brutally decapitated in Philadelphia. The poor robot’s demise is just one of the many unseemly stories told about Philly, which also include Phillies fans throwing snowballs at Santa Claus and intentionally vomiting on children. This has also been made cultural canon by It’s Always Sunny In Philadelphia, a show about five of the worst people alive and their cartoonish antics that bring misery and disfigurement to everyone around them.

To an outsider, this might make Philadelphia seem like hostile territory. And yet that sense of toughness and abrasiveness is what rock and roll is built on, right down to Lemmy flashing photographers the middle finger every chance he got. It also ties Philly’s musicians together, both in a united sense of resilience and an ability to mock one’s more objectionable qualities.

“It seems like more of a feeling that people internalize rather than put on others,” says Jillian Taylor, singer for Jersey- and Philly-based heavy psych crew Ruby The Hatchet. “Self-deprecation can be an art form after all. The jaded bartender who has had more bands than decent people in his life might not hate your band per se, maybe he just realizes he is a parody of himself and can’t escape (maybe he also hates you, just a little, but he’ll still get you a drink, eventually)…I will say that Philly is just a tough city in general, especially for out of town bands, and it takes a lot to impress unless there is no cover at the door or copious amounts of alcohol involved.”

These days, as with those of all American cities, Philadelphia’s music scene is being threatened by gentrification. The arrival of wealthy out-of-towners looking to lower their rent has left fans feeling threatened and bands looking for new places to play.

“Philly has become this place for everyone to move to,” says Francis Kano. “It’s like a cheaper New York. So we definitely have an influx of punk bands, but metal has only dwindled, unfortunately.”

“There’s a Kurt Vile mural on a restaurant where you can eat a $100 steak,” says Jillian, “directly across the street from a super seedy dive bar/venue where you’ll most likely get your ass grabbed upon entering, and all this is directly down the road from opioid zombie wonderland.”

But at the same time, the members of Philly’s local scene continue to soldier on with the hands-on approach of rock musicians before the time of the Internet. That, plus the city’s bone-deep fuck-you attitude, continues to make it a safe haven for loud, angry, in-your-face rock music the likes of which are hard to find anywhere else.

“Philly puts the work in!” says Ruby The Hatchet guitarist Johnny Scarps. “That’s what makes the scene unique here. I think Philly's tolerance for bullshit is what sets [its fans apart] apart. They know if you're up there faking the funk. They aren't buying any overpriced merch and they sure as hell are not making any noise just because you asked them. They make you earn it...and rightfully so.”

The new single by Philly's Ruby The Hatchet will make you dream of a long ride on the open road.

Get ready, Europe: the Hatchet is coming.