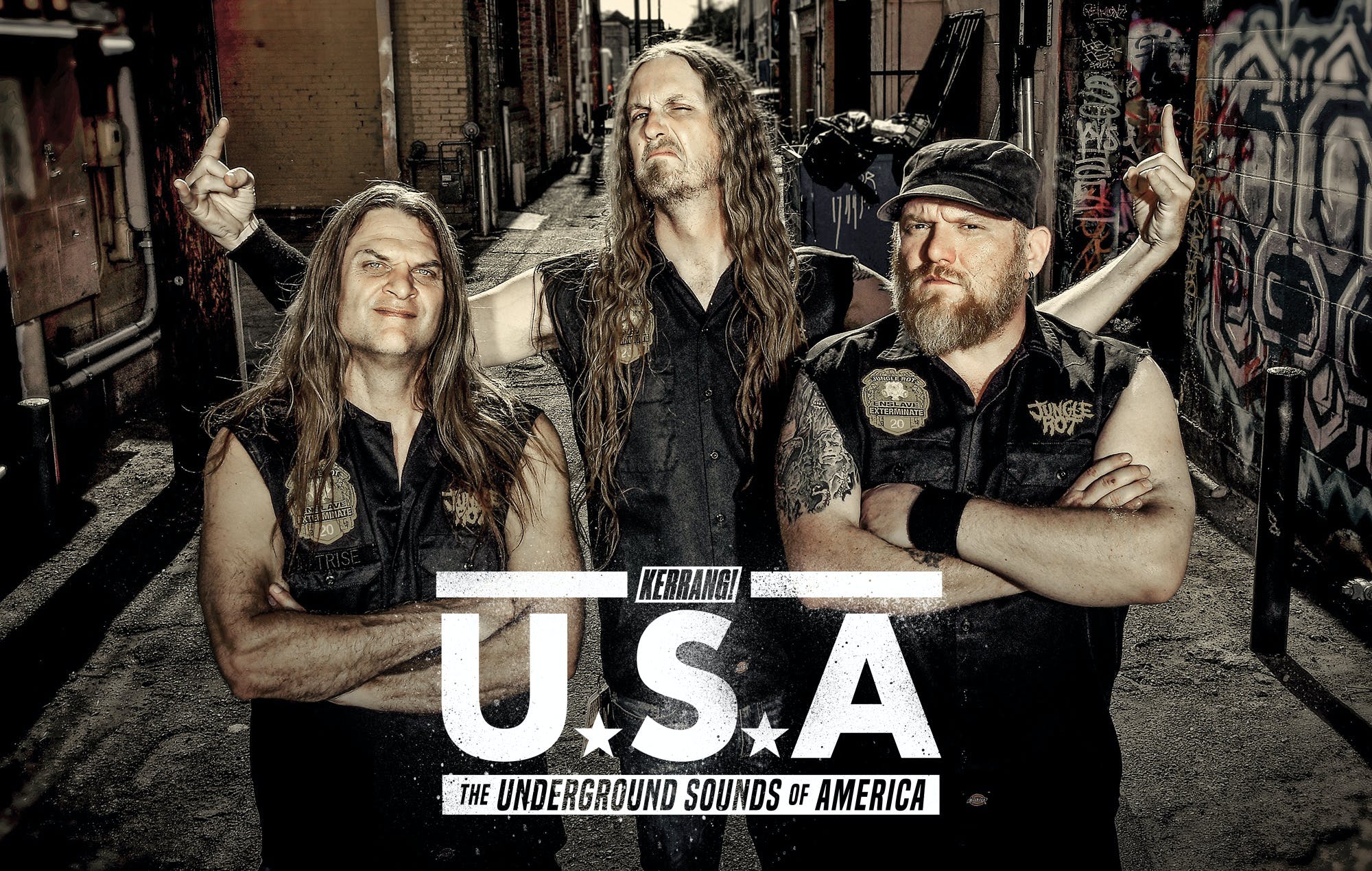 Welcome to the latest installment of USA: The Underground Sounds of America, our brand new series that shines a spotlight on the most underrated rock, metal, punk, and hardcore bands in the United States. Each week, we ask one band member to answer five unique questions so you can get to know them better. Because if you aren’t already a fan of the artist featured below…you should be.

Any truly devoted death metal fan knows the name Jungle Rot. For over 25 years, the Wisconsin-based outfit has carried the torch for a unique style of thrash-influenced death metal that has inspired many a modern metal band.

And yet, Jungle Rot have somehow yet to break through to a level of mainstream metal fame like that of so many of the band’s tourmates and contemporaries (including Deicide, Cattle Decapitation, Dying Fetus, The Black Dahlia Murder, or Obituary, to name just a few). It’s time to give Jungle Rot their due.

Founded in 1992 in Kenosha, Wisconsin -- about halfway between Milwaukee and Chicago on Lake Michigan -- the band began as a side project for Illinois thrash metal act, Prisoner. It wasn’t until guitarist Dave Matrise joined the band about a year later that Jungle Rot would begin to take shape as we now know it.

Today, the vocalist / guitarist soldiers on as the band’s sole constant member over the course of two decades and 10 albums. James Genenz (bass), Geoff Bub (guitars), and a slew of rotating drummers have rounded our the lineup since 2005. And the trio’s latest self-titled effort (due out July 20 on Victory Records) is easily their best -- from songwriting, to performance, to production.

While Matrise’s vocals are as guttural and bestial as ever, and there’s more than enough thick, chunky guitar tone and mid-tempo groove to head bang to, the new record is also dripping with German thrash metal influence. Its first single, Fearmonger, clips along at breakneck speed and features vocals from Marcel "Schmier" Schirmer of Destruction. The album even closes out with a cover of Kreator’s 1987 classic Terrible Certainty.

It is the dynamic juxtaposition of such fast-paced riffage and brutal, deliberate stomping that makes Jungle Rot so good at what they do. Simply put, you can’t like death metal and not like this band.

Excited about the new album, we cornered Dave Matrise with five questions that would help enlighten those unfamiliar with the band -- and those looking to reacquaint themselves with a death metal legend.

1) If you had to give one Jungle Rot album to someone as an introduction, which would you choose and why?

I'd say the newest one -- and I’m not just saying that because it’s new. I know it’s our best stuff to date yet, and I’m proud to say that. After over 20 years of writing music, I think we have it down. On each record we try to outdo ourselves from the last one, and once again we achieved that. Thanks to [engineer and Nightingale frontman] Dan Swanö and his work -- his mixing is everything I wanted it to be; you can hear every little thing going on in the songs. Dan's mastering work is hot as hell, as well. It just makes you keep turning it up louder and louder each time you play -- just the way I like it.

3) You're a professional hunting guide. Has hunting ever influenced your music writing in any way?

We wrote the song Paralyzed Prey about a bear I shot with a bow and arrow some years ago. It holds the record for largest kill in the province of Manitoba, Canada. I hunted the brute for three years, and it was such an honor getting the big beast that we decided to write about it. The song became the first single released off of 2015’s Order Shall Prevail.

4) What's the worst experience you've ever had on tour?

My worst experience on tour was the the first time we played Vancouver, BC. I was excited to play there and see their beautiful country -- something I’ve been wanting to do my whole life. But when we arrived at the venue, it was in the middle of the city and it happen to be a red-light district where anything goes. I’ve seen a lot of crazy shit on the road…but nothing can top this.

Around the club there were drug addicts, prostitutes, and thugs everywhere. When we first pulled up, I saw a guy shooting heroin into the neck of a guy in a wheelchair with no legs. I then saw two girls walking, and one stopped right there to relieve herself. While she was squatting down peeing, the other girl she was with started to vomit. All of a sudden, the peeing girl started to go through the other girl’s vomit with her fingers. It was one of the craziest things I’d ever seen. It made me really think about how grateful I am for everything and everyone I have in my life.

A year later, we returned to the same venue and saw the same guy in the wheelchair still doing his thing.

5) What's the most metal thing you've ever done?

I'd say playing at Brutal Assault festival in Czech Republic in front of 10,000 metal heads. Definitely a major metal moment in my career.

Satan spreads his wings over America as Deicide announce a U.S. tour with Origin, Jungle Rot, and The Absence in tow.

Wisconsin's greatest death metal act are back with an epic wartime music video.