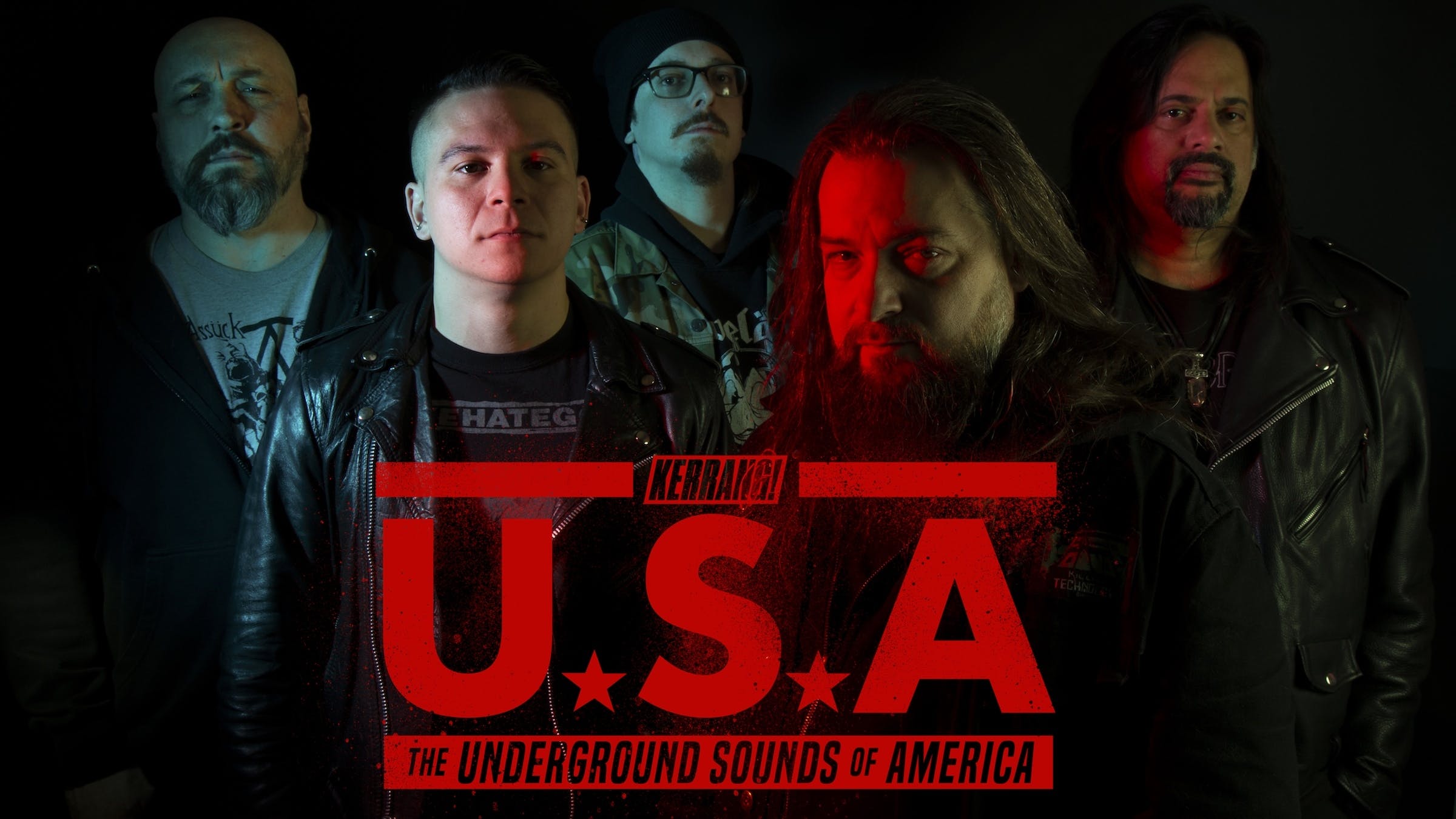 You might not expect the beautifully dark balance that Ringworm so perfectly strike. When a band names itself after a parasite, one usually expects them to be pretty gross and confrontational; when they play ten-ton breakneck hardcore fronted by an unstoppable rage machine nicknamed ‘Human Furnace’, even more so. And yet, for all their muscular power, the Cleveland, Ohio, five-piece have lyrics and art that focus heavily on witchcraft and occultism, adding an atmospheric darkness to their aesthetic that attracts fans of metal and hardcore who love a powerful impact but still have the Devil in their hearts.

“Before I was even in a band, I always had a slight obsession with the occult,” says Human Furnace. “I've always found religion and the occult very interesting, as it's a huge part of most people’s lives, whether you are a religious person or not. I find it fascinating the way religion has molded society, for good and bad. It's corrupt, but also saves many. It gives, but also takes. It's inspired many great works of art, love, hate and war. It's a powerful thing for many people.”

These days, hardcore bands using occult imagery is par for the course, but when Ringworm started it, they were one of the few. For Human Furnace, that darkness is an ever-present part of loving heavy music.

“I'm not sure whether I noticed anything taking off,” says the singer. “Growing up a skate punk/metalhead, I've seen a million bands use satanic or occult imagery. Some do it legit, others just for shock value. I use it for a ‘backdrop", a "tone-setter’ I can bounce and contrast my lyrics off of. I guess, over the recent years, I do notice bands using that type of imagery to propel themselves into a certain pre-established genres. Or perhaps because it's ‘cool’ or ‘scary,’ or they have nothing else better to sing about.”

Ringworm’s new album, Death Becomes My Voice, continues this tradition, with a cover featuring a sexy, serpent-wrapped witch and eleven tracks that sound like getting kicked to death. It’s these musical chops and the seemingly endless ire behind the band’s sound, and especially Furnace’s vocals, that have made Ringworm one of America’s most hard-working and hard-touring underground bands. Sadly, the road has been as merciless to Ringworm as the band have been to listeners’ eardrums.

“We've definitely have had ups and downs on tour,” recounts Human Furnace. “We've had family members die while we've been out on the road, which is without a doubt one of the worse things that can happen when you are thousands of miles away from home. We've also been very fortunate. Once our van's steering went completely out right as we pulled into a club...15 minutes earlier, we were careening through the 14% rollercoaster drops of the Rocky Mountains. If the steering went out 15 mins earlier, we all would have died.”

Wondering when exactly our noses started bleeding, we reached out to Human Furnace about the band’s background, the new album, and most importantly, their experience with their namesake.

1) If you had to play a newcomer one Ringworm song to introduce them to the band, what would it be and why?

Hard to say. Over the years, we've always tried to blend and bend all sorts of genres into our sound. We like to think that we deliver something for everybody. I would say anything off the new album, Death Becomes My Voice, or perhaps something off our Birth Is Pain record. Both are good landmarks for where this band has been and is right now.

2) Who would you say are Ringworm's five biggest musical influences?

I can't really speak for anyone else in the band except for myself. But, for me, I'm kinda all over the map, musically. So, this is a very tough question. I guess I should speak to the lyrical and vocal influences, and these are going to be vague. Ever since I was a teenager, I've always been a big fan of ‘80s goth and alternative. Lyrically, I admire the vulnerability and the willingness to expose a weaker side of oneself that usually is the case for most 'goth' bands. But I also admire the straightforward contempt, anger and viciousness that a lot of alternative metal delivers. I am also influenced by many childhood bands, such as KISS, King Diamond, and Alice Cooper, that deliver a heavy dose of theatrics to really help drive their points home.

3) Who would be on Ringworm's dream tour?

Over the years, we've been able to tour with quite few acts, that I've really enjoyed. A big one is Voivod. They have been a favorite band of mine since I was a teenager. Being able to tour with them and, thusly, become friends with those guys, still feels surreal. Looking into the future, there really isn't a dream tour for me, although we really lavish and thrive when we have the opportunity to tour with 'older' metal bands. Straight-up metal and thrash metal audiences seem to ‘get’ what it is that we're doing, and really appreciate all the elements that we bring to the table. Whereas some crowds simply wait for a breakdown. Which I guess is fine. We have some of those, too.

4) What hobby are you most passionate about outside of music?

Outside of music, I really just focus on art. I've been a tattoo artist for close to 30 years, and I do many other art involved things as well. Graphic design, poster art, T-shirts, album covers, storyboarding, et cetera. This year I have plans on writing and directing a short film thats based upon the storyline depicted in our Justice Replaced by Revenge, Shades of Blue, and Acquiesce videos. I'm also a huge baseball fan, so a lot of my time goes into that, artistically and as a fan. Big fan of pinball as well.

5) Finally, has anyone in the band ever had a case of ringworm?

Oddly enough, no. But my cats had it once.

Ringworm's Death Becomes My Voice is out this Friday, May 3rd, on Relapse Records, and is available for preorder.

For more on Ringworm and their legacy, check out our States Of Metal profile on their home state of Ohio.

If you're in the Rust Belt this weekend and want to catch Ringworm at their record release shows, check them out at one of the dates below:

States Of Metal: Ohio Thrives On Grit And Determination

The Buckeye State's industrial gloom inspires its metalheads to make killer metal just because they can.