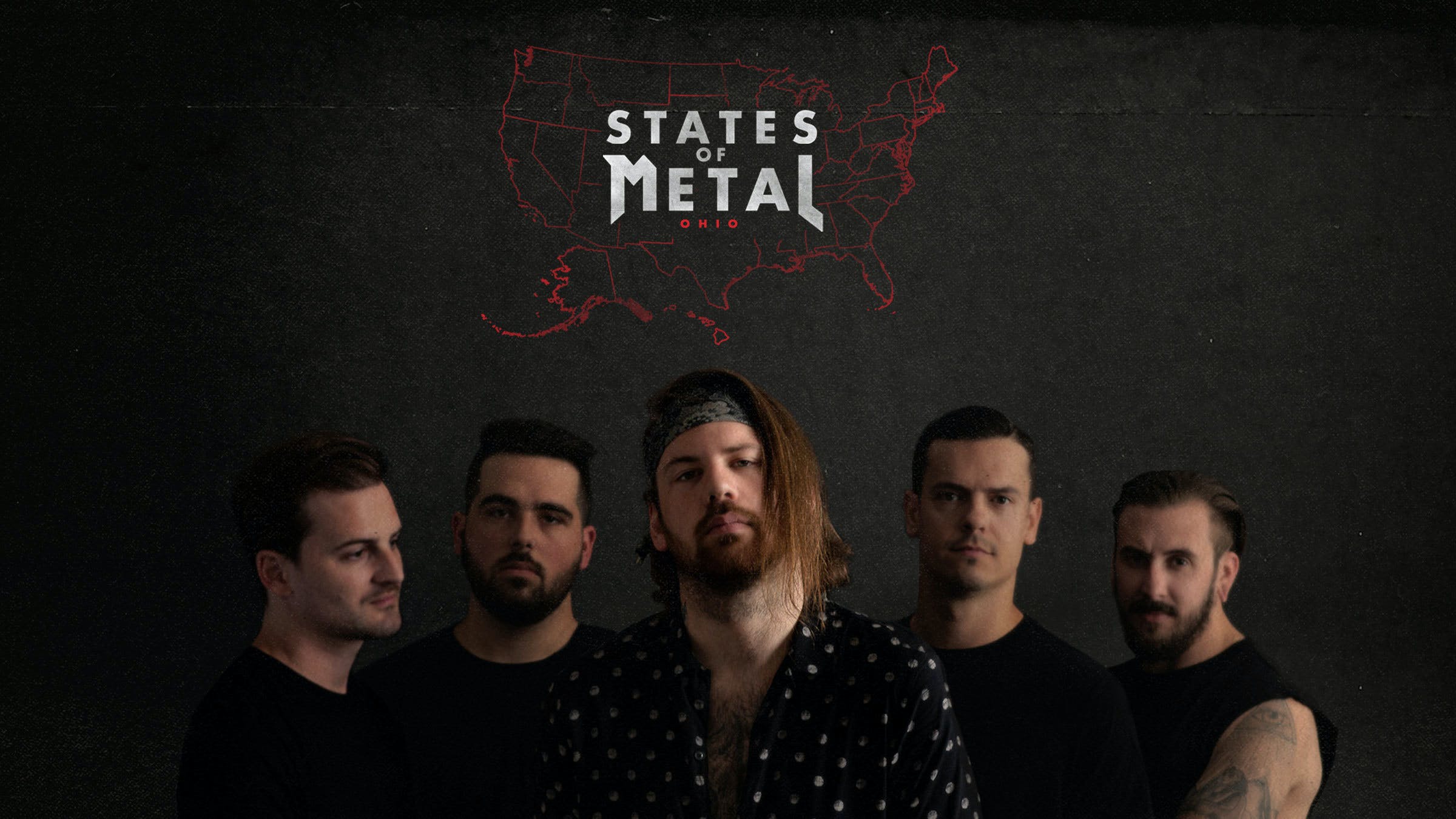 And while you’re reading, listen along to our States Of Metal playlist, featuring killer tracks from each state we feature. Scroll through to listen to music from Arizona and all of the states we’ve profiled in the past:

As Ohio goes, so goes the nation -- at least, that’s what political pundits will tell you when watching an election. The 17th state admitted to the Union sometimes functions like a thermometer for the rest of the country: in places deeply rural and in others densely urban, in some counties very wealthy and in others intensely poor.

Every contradiction that defines the heart of America is present in Ohio, and as such, the Buckeye State isn’t always an easy place to live, let alone make heavy music. Every successful metal band in Ohio has needed to work as hard as possible to make their presence known, and even then, hard work has never been a guarantee of success. As such, the state’s metal identity is one of hard-edged, if slightly downtrodden, independence -- you just gotta make the music happen, whether or not anyone will love you for it.

“There’s a ‘just do it’ attitude in Ohio,” says Mark Hunter, vocalist for Cleveland metalcore legends Chimaira. Formed in 1998, Mark’s band was Ohio’s great contribution to the New Wave of American Heavy Metal, the same musical movement that produced Lamb of God, Avenged Sevenfold, and Unearth. “In school it seemed like everyone was in a band. We were fifteen, sixteen years old loading gear into venues. It wasn’t like we were going around saying, ‘One day we’re going to make it.' We were just doing it.”

“If you made it out of Ohio at all you definitely busted some ass,” agrees Caleb Shomo, vocalist of Beartooth. Before his current gig, Caleb was the frontman of Columbus screamo prodigies Attack Attack, another band who benefitted from Ohio’s unique cocktail of worth ethic and supportive local scene. Shomo remembers his bandmates from Attack Attack, a band he joined when he was just 14, saving up to buy loud amplifiers. The best they could scrounge together were relatively cheap Crate-brand speakers, but they still made the effort of ripping off the logos and cranking the knobs to dangerous volumes.

“We had local bands that would sell out a thousand cap venue,” he says. “To stick out you had to be the band that was willing to go outside of Ohio or do the weekend warrior thing every chance you got. It was really a question of who wanted it the most.”

At the same time, Shomo says, though Ohio bands are supportive of one another, they’re also competitive. Shomo fondly remembers eight-band local bills composed of acts supporting one another while also competing to see who could play the loudest, or have the wildest stage show.

“Ohio can be a bit of a tough scene,” says Shomo. “Growing up, there were so many local bands, and honestly pretty good ones, and a few good local recording studios that were pretty cheap. To me that’s what’s so important about where came from -- I don’t think I’d be doing what I am now without having come from a crazy local show support system. Everyone was cool with everybody and anyone who wanted to jump on [a bill] could just jump on.”

But sticking together in Ohio is difficult. Though not nearly as expansive as some of the Westward states in the union, Ohio’s main metropolises are situated at its distant corners, Cleveland in the northeast, Cincinnati in the southwest, and Columbus at almost its dead center.

And in between those metropolitan centers? “It’s just small town after small town that has a tiny little downtown with a VFW in it, and it looks kind of sad,” says Scott Hedrick, guitarist in Athens, Ohio's Skeletonwitch. Scott grew up in one such small northwest Ohio town, Delphous. By his own admission, there was almost no local rock scene, and to get to a venue he had to wait until he was 16, get his driver’s license, and drive into one of the State’s major metropolitan centers.

“All of us [Ohioans] have a ridiculous midwestern work ethic,” says Scott. “With that work ethic and niceness, there’s a bit of a grit. Especially the Clevelanders. There’s cold hard winters, and it’s an industrial city.”

Of the cities in Ohio, Cleveland is probably most well-connected to the remainder of the country. Situated along Interstate 90, which connects the East Coast to Detroit and Chicago, the city offers relatively easy driving access to other states, as well as nationally-recognized venues. The city’s most veteran loud-and-proud act is probably vile punk act Dead Boys, who were maybe more violent and nihilistic than their British counterparts.

Above: Athenar of Cleveland's Midnight.

According to local historian Athenar, the hooded and anonymous songwriter behind Ohio black-and-rollers Midnight, Cleveland has a long history of ambitious local metal bands since the ‘70s as well. While his band didn’t become well known until the release of their 2011 debut Satanic Royalty, Athenar’s been in the Cleveland metal scene since the 80s. He fondly recalls seeing his first local band in 1987: Cleveland's premiere 80s thrash band Destructor, whose debut album Maximum Destruction is now a cult classic.

“In the ‘80s, Destructor was a real band,” says Athenar. “We thought of them as just as good as Exodus or Possessed...They would play Peabody's and fill it up -- the same place Megadeth played on the Killing is My Business tour.”

But where Megadeth hailed from affluent and temperate San Francisco, Destructor’s rougher edge reflected the resolutely working-class vibe of Cleveland and Ohio in general. “The punk stuff, the metal stuff, it was always about getting off of work and going to a gig,” Athenar recalls. “Whether you were playing or just attending, you didn't have time to put hairspray in your hair to make a mohawk. Dudes go there in jeans and an Indians tee shirt, or just boots and a leather vest. It was really barebones, and still is."

Destructor’s early material was released by Auburn Records, based in nearby Medina, OH. That label also put out a treasure trove of LPs by Ohio-area metal bands in the ‘80s, including Breaker, Purgatory, and most notably Black Death -- by many accounts the first metal band composed entirely of African Americans. The label's heyday is past, however, and Athenar hopped on their train just as it was rolling to a halt.

“Dave Holocaust, the bassist in Destructor, was stabbed and killed a month later after I saw them,” he remembers. “That was his last show.”

In the wake of metal’s commercial and creative peak in the 1980s, Cleveland became the epicenter of a musical movement -- one that sounded as remorseless and sharp-edged as the city’s rusting machinery, and which fused its punk and metal roots. Bands like Integrity and later Ringworm innovated a searing, dark form of metallic hardcore that is associated with the city.

“Integrity were definitely one of the forefathers of blending metal and hardcore together,” says Mark Hunter, who credits those bands as critical early influences. “I was very lucky in my mid-teens to be able to go to matinees and see Integrity, Ringworm, Apartment 213 -- bands that were popular locally and made international headlines as well. As a young musician myself, those bands put me in a position to look at myself and say, ‘Whoa, I can maybe be in a band and play shows and go to Europe.’ I was very lucky to have bands thriving in this style that I was listening to.”

“Cleveland had a very tiny local music scene at that time,” recalls Dwid Hellion, the vocalist and sole remaining original member of Integrity. Dwid was born in Indiana and then spent his early teens in Louisville, Kentucky, attending local punk shows before moving to Ohio at age 16. That same year, he took up the microphone in hardcore band Diehard, which later became Integrity. He name drops False Hope, Outface, Confront and Domestic Crisis as early peers. “It consisted of only a few local bands. [...] A couple of those bands may have had demo tapes, but none of the local bands had records until much later on.”

“There was a bunch of house party-type shows, where we'd see a lot of punk or metal bands in someone's basement or in a backyard,” says Human Furnace, vocalist of Ringworm, who also began attending local shows at the same time. He lists The Guns, Hyper As Hell, Confront, False Hope and Cleveland’s Terror as early bands he witnessed. “Those were whirlwinds of beer, broken glass, raging bonfires and mosh pits. Once I started going to local punk and metal shows in ‘legit’ venues around ‘87-’88, it seemed like I was at a show three times a week -- I probably was.”

Dwid, Human Furnace and others grew into integral local musicians, and kept the art of riffs alive in Cleveland, and paved the way for bands like Chimaira, Beartooth, and Midnight today. And while Ringworm, Integrity and their peers aren’t carbon copies of one another -- Dwid insists that he doesn't believe there is a single Cleveland ‘sound’ -- they share a bleak and bitter attitude, one which has its roots in the social landscape and economy of Ohio.

“I remember [Cleveland] being saturated with abandoned buildings and polluting factories,” says Dwid. “Definitely gave off a desperate and desolate feeling. Perhaps that plays some role in the mood of the musicians in that area.”

“The ‘imprint’ of some of those factors usually results in depression, hopelessness, and a general Fuck The World type attitude,” agrees Human Furnace. “I think that gets under your skin and ingrained in Cleveland bands’ DNA, whether they like it or not.”

“I don’t know how many people realize Maynard from Tool is from Ravenna, Ohio. Manson was here, both Charles and Marilyn,” reminisces Mark Hunter. “Trent Reznor of Nine Inch Nails, he started here. There's’ quite a few artists from Ohio who have made a big impact.”

Ohio’s darkness, which comes naturally from the state’s socioeconomic background and harsh weather, takes its toll, which may explain why so many of the state’s great musicians wind up leaving it. Thought Athenar, Shomo and Hunter stuck around, Dwid Hellion of Integrity now resides in Belgium, and Scott Hedrick now lives in Los Angeles, though he’s still in Skeletonwitch. But even those musicians who moved away refuse to speak ill -- or fully ill -- of the state that created them.

“I like Ohio in a fucked-up way,” Hedrick says. “I never want to live there again, but Ohio exports some really wonderful people...as much as everyone complains about it."