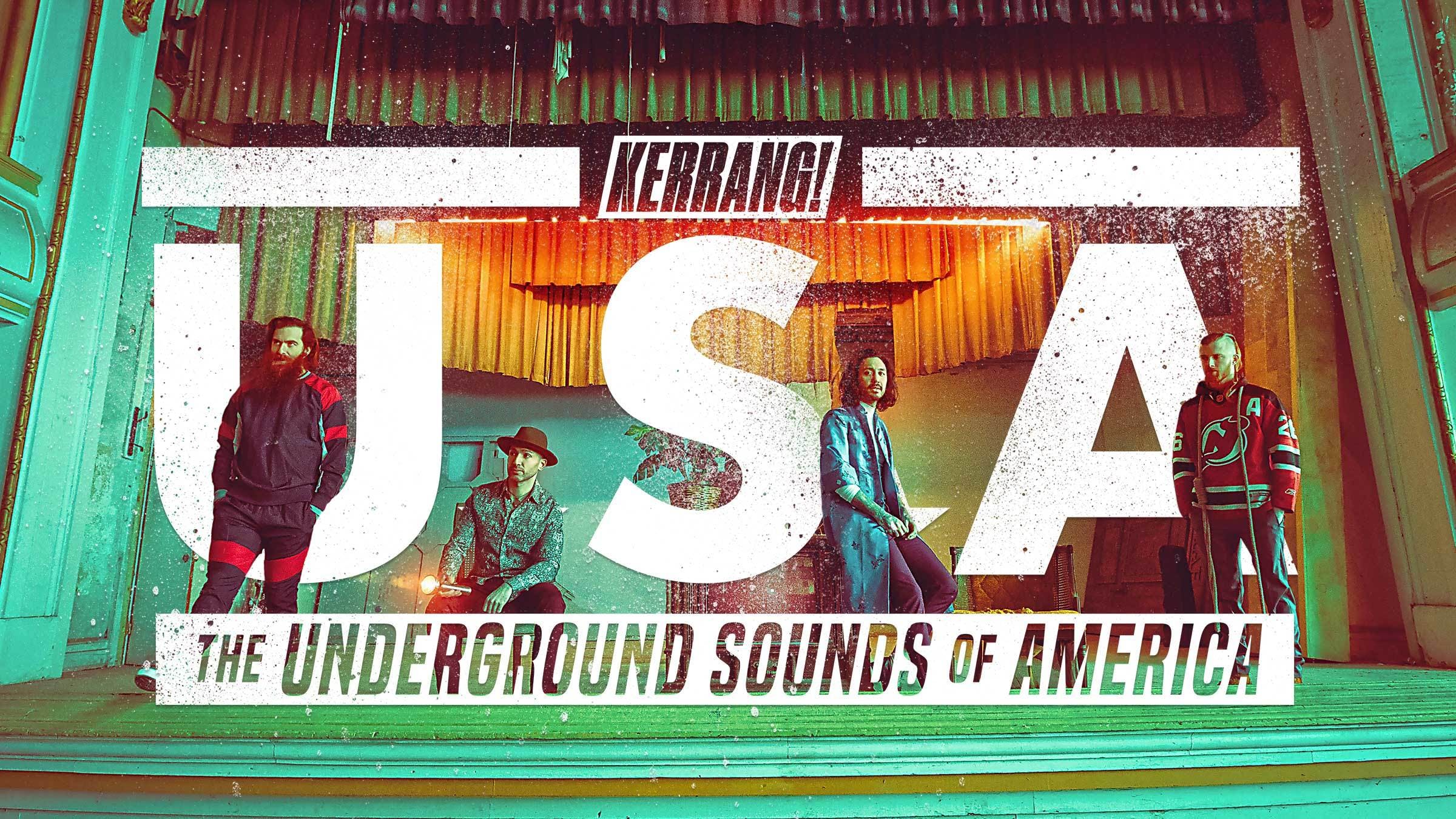 It’s only fitting that The Number Twelve Looks Like You don’t have a traditional career trajectory. The New Jersey mathcore quartet spent the better part of the 2000s making a name for themselves with their bizarre and untameable mixture of death metal, hardcore, screamo, and triple-jointed prog, as well as with their cathartic live performances. By 2009, the band’s albums were even entering the Billboard charts -- until they broke up seemingly out of nowhere. But in 2016, the underground tour de force reunited after their extended hiatus, all of which was a necessary part of growing as a band according to frontman Jesse Korman.

“I would say, like a new pair of firm shoes, we needed to get broken in,” says Jesse. “Everything was solid on the surface, but we needed to beat each other up to really move well. Understanding one another’s personalities and strengths was key to creating this new album. It wasn’t just, 'Hey, Mike [Kadnar, drums] and DJ [Scully, bass], learn these old songs exactly how they are and play exactly what is there.' No, it was, 'This is how it was written, but if you hear a more powerful way of performing it, do it.'”

READ THIS: The Underground Sounds Of America: Microwave

This growth can be heard loud and clear on Wild Gods, the band’s first new album since 2009. Where their last record, Worse Than Alone, immediately confronts listeners with a tortured spew of noise, Wild Gods takes its time, reveling in the theater of the band’s music and the open moments between the riffs. The result still has the same convulsing overkill of The Number Twelve Looks Like You’s previous work, but adds a Mike Pattonish grace to their sound. That said, those worried that the band has lost their edge need only to watch their new music video for Ruin The Smile -- which confronts clerical child abuse -- to know that these guys haven’t gone soft with age.

“I work as a filmmaker, so I’ve been waiting to do an official Number Twelve music video for quite some time,” says Jesse. “I wrote, produced and directed the Ruin the Smile video, shot the whole thing in one day in a town called Shenandoah, PA. Pulled every favor I had to make this baby happen for a shoe string budget. It was NOT easy trying to cast this video -- I mean, who wants to sign up and star as a pedophile? On top of that, trying to find a child actor/parent to be okay with the content of this video. For months, I thought this video was doomed. I wrote an almost impossible script, but I couldn’t give up. Two weeks prior to the LATEST we could have shot this video, the dream cast was found and EVERYTHING fell into place.”

Ready to pick the madness back up where we last left off, we reached out to Jesse to find out how The Number Twelve Looks Like You finally hit their stride in 2019.

1) If you had to play a newcomer one The Number Twelve Looks Like You song to introduce them to the band, what would it be and why?

That’s a really hard one -- on the one hand, I would play them one of the instrumental tracks so they don't have to hear me screaming, which typically scares everyone away. But on the other hand, I would want to show them a song like Don’t Get Blood On My Prada Shoes, just to show how 'scary' we can be.

2) Who would you say are Number Twelve’s five biggest musical influences?

3) Do you think being from New Jersey informs your music, and if so, how?

I want to say yes. I feel like the greater NJ area has always been known for the underground basement screamo shows more than anywhere else. We had bands like Thursday, You And I, Saetia, Neil Perry and more who would play these small basements, but put on HUGE emotional performances. It wasn’t about the size of the crowd, it was about having everyone feel what the band was feeling. The intimacy of being in the presence of extreme anger, rage, happiness or confusion. As a band from New Jersey, we wanted to carry that torch. Expression of pinnacle passion.

4) What's one time something went terribly wrong or miraculously right (or both) for you on the road?

One time in 2008, we were on tour with Horse the Band and we had to drive through a really sketchy Colorado mountain pass. It had been the worst snow storm they had seen in years, and of course it was right when we had to drive through it. So we have a show that night in Colorado Springs and had to hit the road ASAP. As we come to the foot of the mountain, a cop stops us and says we need snow chains for our tires. Fine. Setting us back a little on time, but fine. We go pick up one set (two tires), get back to the foot of the mountain, proceed to apply the chains on. We roll forward two feet, we pop a tire. Turns out nobody knew the correct way to put them on.

READ THIS: Meshuggah are easily one of the most exciting live bands in metal

Now we are down a tire, so we try changing it out for the dumpy spare in the back. What happens? We cant take the flat off the axle, so we call AAA tow service. Setting us back even longer now. They come change it out for us and put the chains on correctly this time. We begin our journey up the mountain. As we get closer to the top, traffic builds up. But what is not working to our advantage is that we have a 15-passenger van and a 15-foot trailer with loads of gear in it, so you can imagine that hauling this thing up a slippery mountain is not working for us. It gets worse and worse the higher we go, sliding to the left and right and eventually drifting backwards into traffic. It gets so bad as we approach the summit that we begin to slide off to the side of the mountain. Everyone in the van gets out, I am driving and they start pushing. We even notice others coming to our aide to put us back on track. Everyone working together, counting down from three to give a huge PUSH back into the lane before we fall off.

Eventually, we get enough traction that we start moving, but have to be so incredibly careful to not drift off again. It was a horrible experience and took about six hours to go through the pass that should have been an hour. We arrive at the venue RIGHT at our set time, unload our gear right onto stage and play -- but not without bringing the flat tire on stage and using it as a trophy.

5) You've described your new album as "a galactic freak show advertisement to aliens." In your mind, what would an alien tourist be most horrified by -- or amused by -- on this planet?

It’s a good question, because we live in it everyday, so I feel like I’ve even lost touch with what’s 'horrifying' or 'amusing' anymore. As much as I want to focus on the positive, its hard to deny ALL the wrong happening. Horrifying WOULD be the organization of over 5,000 religions all claiming their god is the right one, and holy wars being the result. People losing their lives or taking other people’s lives in the name of their own fictitious god. We are numb to it -- it seems normal now that events like this happen around the world and nothing changes. And if it's not life-threatening, these religious figures claim to be the direct voice from God, spreading his love, yet they sexually abuse children at the same time.

I’ve also become numb to the fact that global warming is heating up the planet at all time high records, or that we have colonies with no clean water and governments who do nothing about it, or we can live amongst others who truly believe they are superior to everyone around them. We live in situations like this everyday that it’s becoming the new normal...what I would hope is that everyone here can take themselves off this planet and see what we are doing to it. See what we are doing in it. It’s not all about us.

The Number Twelve Looks Like You's Wild Gods comes out Friday, September 20th, on Overlord Music, and is available for preorder.

Catch the band on tour with God Mother and Pound at one of the following dates: