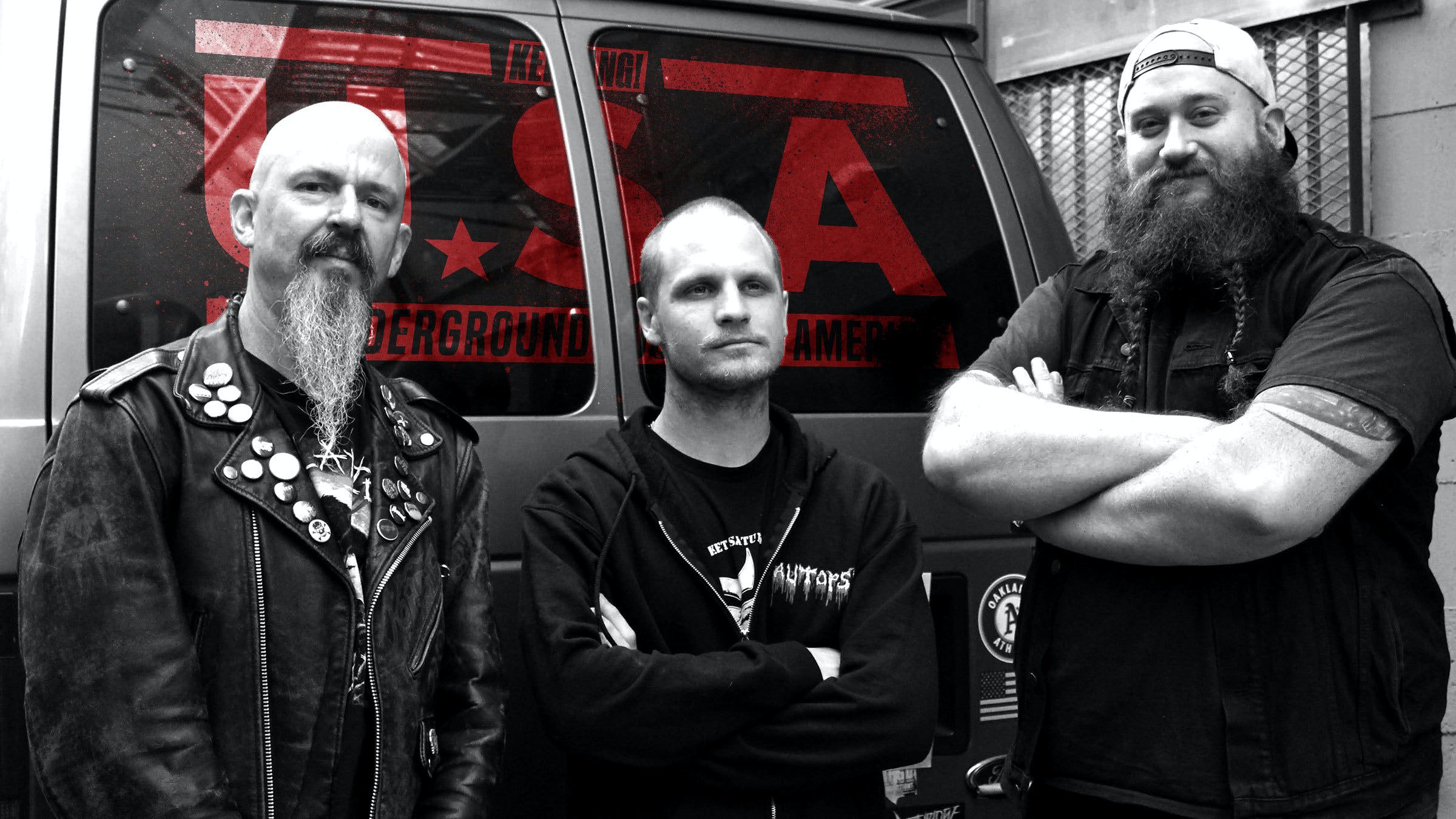 For many extreme metal musicians, side-projects are a chance to express something different; in the case of Violation Wound, that message seems to be: "Listen to this shit, it rips."

The speedy death metal trio fronted by Autopsy drummer/vocalist Chris Reifert express violent hardcore rage through the art of kickass galloping metal-punk. And while the band still surrounds itself with violent and morbid imagery, its ethos seems to be more about venting misanthropy rather than submerging one’s self in horror and gore. For Reifert, however, it’s more about theory in practice than any sort of broad concept.

“I think it's more like which band demands which kind of approach,” says Chris, playing guitar and vocals this time around. “If Autopsy had lyrics like Violation Wound, it wouldn't work, and vice versa. The music has to match the lyrics in either case. The good thing for me when it comes to writing lyrics is there are lots of avenues I can explore with both bands. With Autopsy it doesn't necessarily have to be about someone's limbs being ripped off and with VW it doesn't have to be about telling the world to fuck off. I like the challenge of forcing my weird excuse for a brain to come up with different approaches lyrically. Doing the same over and over in either case would not be fun, you know?”

The band’s upcoming sophomore album Dying To Live, Living To Die is a solid meeting point between these two tendencies. The music on the record is especially furious, with Chris giving his normal gore-moans an extra blast of world-burning guttural hatred, which, coupled with the songs’ off-the-rails pace and nonstop riffage, is absolutely punishing. On the other hand, the album’s cover by veteran death metal artist Wes Benscoter is the kind of design that makes fans of classic horror shriek in delight.

“Yeah, Wes is fantastic,” says Chris. "As usual, I gave him the album title and not much else to go on. What you see is what he sent over and we loved it right away. It has a dark edge to it and somehow compliments the noise within nicely even though it's not a death metal record. Goes well with the title as well, even though it has nothing to do with the title track lyrics. It's a perfect fit, I'd say, and it's also different from a lot of covers that I'm seeing these days.”

In the name of all things fast and brutal, we caught up with Chris about what makes Violation Wound its own special brand of inhuman carnage.

1) If you had to play a newcomer one Violation Wound song to introduce them to the band, what would it be and why?

Maybe Exorcism Of Ignorance? That one's a snazzy lyric video that's out there now. It's off the new album and it has a little bit of everything we do in there I'd say. Besides that one, we probably have 130 or so recorded songs so it's hard to pick. Having said that, I know it's cliche, but I feel confident that the new record is our best yet. We got a really ripping and powerful sound and there's lots of venom behind the approach musically and lyrically. Not Venom the band, mind you, even though I love them. Haha!

2) Who would be on Violation Wound's dream tour?

3) How is playing guitar up front with this band, rather than singing and playing drums? Is one instrument easier to play while singing than the other?

That has definitely been adjustment, but I'm pretty used to it now since it's been six years of VW so far. Being in the front of the stage rather than the back is interesting. I can actually see people in the crowd now instead of just lights in my eyes. Ask any drummer about that. Haha! Playing guitar while singing is way harder for me as I have to actually play the right notes on the fret board while doing my usual yelling and carrying on, but it's been good as it's another way to challenge myself as a musician. Drumming and singing is more physically demanding, but that's something I'm used to because I've been doing it for so fucking long. They're both very different, but I enjoy both and I might as well do all this stuff while I'm still able to pull it off.

4) How have you guys grown or evolved your sound since With Man In Charge?

For the most part, we still have our same style, but we have done a couple of different things, like incorporate a few more slower parts and lower notes. This new album has a heaviness to it, but it's a total rip ride as well. Just realized I made another Venom reference, but again it has nothing to do with what we sound like. Haha! What can I say? We're really proud of this record and if you listen to it loud enough, your eyebrows will definitely be singed off by the time it's over. Probably before then.

5) What does Violation Wound want to bring to the modern punk/hardcore scene that you feel might be lacking today?

I'm not worried about anything that may or may not be lacking, really. We do our thing and other bands do theirs. All we can do is be true to ourselves as VW, which is quite easy. Perhaps we should bring some really super trendy hairdos to the table, but it's not physically possible, so folks will have to settle for our music and utter lack of headline grabbing image. Hah!

Violation Wound's Dying To Live, Living To Die comes out Friday, November 1, via Peaceville, and is available for preorder.