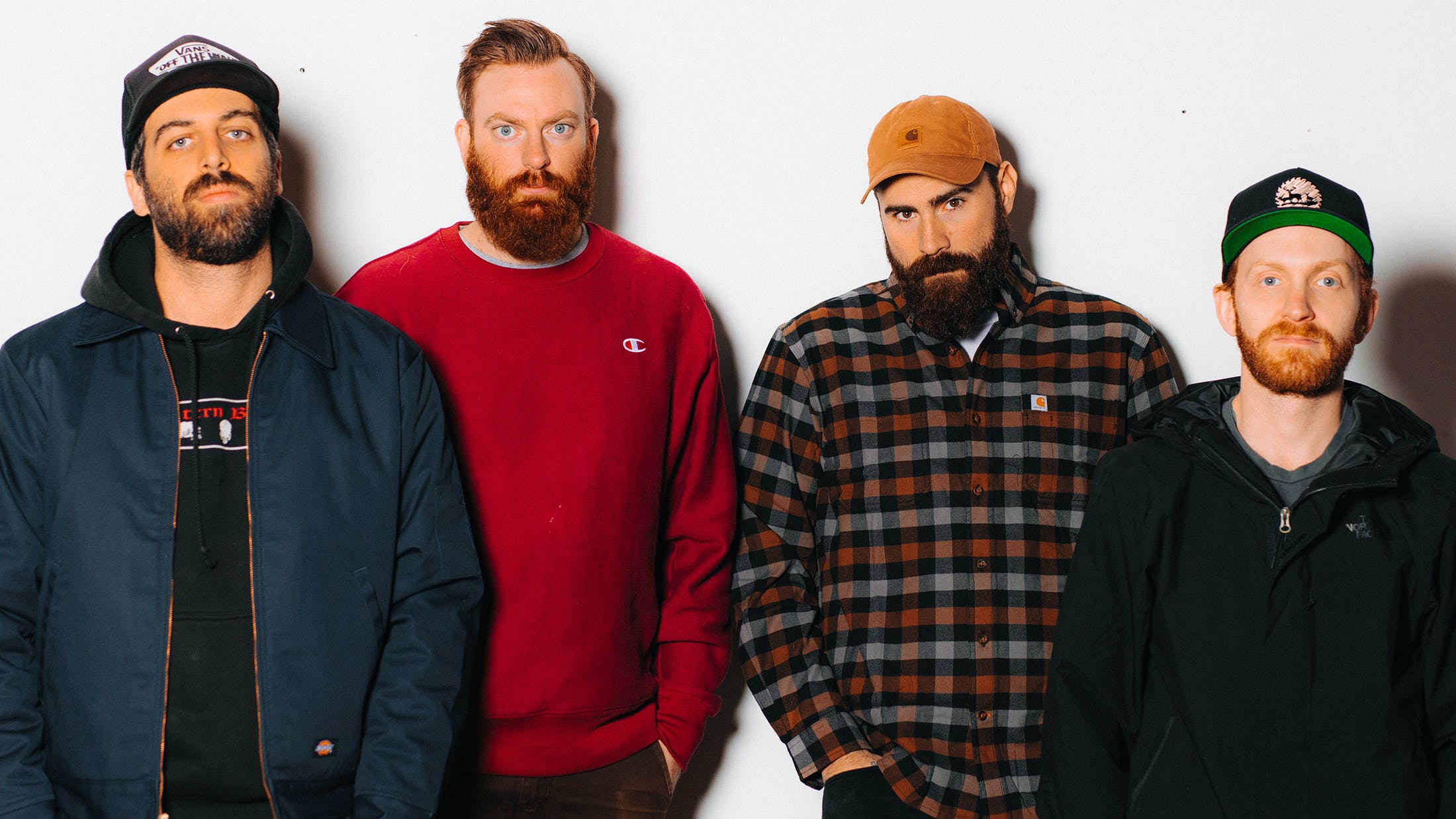 Dan O’Connor’s daughter has come down with pink eye. It’s far from an emergency, but it’s nonetheless a solid, instructive example of the kind of regular stay-at-home dad duties that dominate his life these days. “She’s bummed out about it,” he shrugs, with the nonchalant air of someone well-versed in things not running as smoothly as they could. “She was supposed to be handing out chocolates at school today, but she’ll just have to wait until next week.”

When Dan isn’t carefully applying eye drops to school kids, he’s one of the singers and six-stringers in Four Year Strong. He and the rest of his band – fellow vocalist and guitarist Alan Day, bassist Joe Weiss and drummer Jake Massucco – have been grinding and hustling in the pop-punk scene ever since they were just teenagers. This year marks their 20th together in fact, something they’re celebrating alongside the release of new album Brain Pain. But unbeknownst to the wider world, they almost never made it this far. While they’ve previously publicly denied any problems within the camp, today, for the first time, they’re ready to open up about what really happened behind the scenes.

“The reception wasn’t what we expected,” Dan says, taking a quick breather from parenting at his home in Worcester, Massachusetts to discuss the underwhelming response to the group’s fifth album, 2011’s In Some Way, Shape, Or Form. “Everybody had something different to blame and different thoughts about why things went the way they did. Which is why, for lack of a better term, we broke up. We didn’t even have the conversation [about it].”

In Some Way, Shape, Or Form was supposed to represent a turning point for Four Year Strong. It was their first release on major label Universal Motown, who had deep pockets and high expectations. They worked with big-time producer David Bendeth (Paramore, All Time Low) who, Dan concedes with hindsight, wasn’t a good fit. They had also freshly parted ways with keyboardist Josh Lyford. For the first time in their career, the group were afflicted by an identity crisis.

“We had a lot of different ideas of what we wanted the band to be,” he says, of the underlying conflict. “We had just let go of a member, and that gave us a false sense of unity. It was a decision that all four of us made, which made us feel closer, like we had overcome our issues. When that record came out, we thought it was going to be something it wasn’t.”

Instead, reviews from fans and critics alike were lukewarm at best. In the aftermath, the band couldn’t even face booking farewell shows or posting any kind of notice for fans.

“We came home from Warped Tour 2012 and didn’t do anything for a year and a half,” says Dan.

For the vocalist, it was a chance to be a full-time family man. A year prior, he had signed a lease on a new apartment with his wife, but had only slept in their bed for two weeks, so intense was the band’s touring schedule. Breaking things up, or at least going on unofficial hiatus, seemed like sweet release.

“I was yearning for everything to slow down, even for just a little bit,” he admits. “It was a really uncertain time, not knowing what we were going to be or what Four Year Strong was.”

In the spring of 2013, Dan was working for a pharmaceutical company. At this point, Four Year Strong were still inactive. He hadn’t even spoken to Alan in months. The job was a full-time gig, and his first real attempt at living a nine-to-five life since the band had taken off. Then, suddenly, he was offered a promotion. He relays the story seven years later with all the excitement of someone booking a root canal appointment. As serendipity would have it, though, that very same day Alan called him up out of the blue. Sure, they had all gone their separate ways, and of course Alan would understand if Dan wasn’t interested but… what if they got together and tried writing again? For Dan, it was a no-brainer. “I quit my job and we went full-forward with the band from that time on,” he says, of that sliding doors moment. He might have been a few short weeks shy of climbing the corporate ladder, but deep down he knew that what he really needed was for his best friend from eighth grade to invite him back to band practice. Four Year Strong went on to release 2014 EP Go Down In History, and the quartet haven’t stopped since.

“We’ve had that typical band story of putting out an album that no-one liked, and then it all goes downhill,” says Alan today, laughing off their crisis of faith. “Honestly, I’m glad that happened to us, because if we had stayed where we were right before all of that happened, I don’t know if we’d be as strong as we are now.”

He takes a deep breath and sighs. “We learned a lot from how bad things can be.”

“We did a lot of growing up that we [previously] didn’t have time to do,” says Dan, of the break from the band. “We all did our own things. When I first started touring, I was living with my parents. So you want to be out on tour all the time, because that’s where you have fun, and where you get to hang out with your friends. Now I have my wife, and I have my family. There’s a greater pull to be home. It’s about finding that life balance between everything.”

Fast-forward to 2020. The quartet have released their seventh album, Brain Pain, through Pure Noise Records. They’ve re-centred their vision as a band and forged ahead. But it’s come, once again, as a result of tremendous soul-searching and self-examination. As Dan sings in the chorus of the title-track, ‘I wish that I could focus my hopeless wandering mind / I’m losing perspective, tearing out all my insides / Looking in from the outside’. For him, it’s about reconciling the two stark, opposing realities of being the arrow-straight family man and the nomadic, globe-hopping pop-punk musician.

“As a 35-year-old,” he reflects, “becoming a full adult and having all of these responsibilities, am I actually the guy onstage who’s going crazy and screaming? Or is that…”

He pauses, searching for the right words.

“It’s not an act, but how much of my actual personality is that? Am I just acting the way that I think an at-home family guy should, and I’m actually the guy onstage? Or vice versa? Who am I, in that spectrum of personality and character?”

Despite all this introspection, Dan admits that he doesn’t have it all figured out yet. In fact, 20 years in, he still finds optimism hard to come by. “My gut feeling towards the band is: prepare for the worst, hope for the best,” he admits. “That’s why I have all this questioning of my abilities running through my head. I think we all go through that when you’re creating something from nothing.”

Indeed, the creation of Brain Pain was, in a way, like starting from scratch. After the band’s self-released, self-titled record of 2015 – one both Dan and Alan cite as a “return to form” – there was a 10th anniversary reissue of their first full-length, fan-favourite Rise Or Die Trying, followed by 2017’s Some Of You Will Like This, Some Of You Won’t, re-imagining songs from each era of their career to date. So when they began work on Brain Pain, it had been at least five years since they had sat down to write new music together. And Dan says he has learned new lessons about what that process demands.

For both Dan and Alan, it’s less about trying to repeat the tricks of the past, and more about reconciling all aspects of who they’ve been and who they are right now – evoking the spirit of those same teenagers with the keys to a van and a handful of dreams, while embracing life as the grown-up family men in their mid-thirties, writing music that has now sustained them over two decades and counting.

“When people hear these new songs, we want them to feel the way they felt when they first heard Rise Or Die Trying,” says Alan, of Brain Pain. “Not that they sound anything like those songs. We’re different people entirely than we were back then. But there are pieces in there that are still the same.”

And despite what detractors might sneer about perceived limitations of the pop-punk genre, Dan insists that the band’s drive and passion for this music remains as strong and true as ever.

“Just because we’re writing songs that are in this genre doesn’t mean we can’t have them be heartfelt and actually mean something to us. This is as artfully pure as a pop-punk record can be,” he argues. “It actually represents who we are as people now, versus who we were as people when we started the band.”

Identity crisis authoritatively dealt with, Dan goes back to the matter at hand and administers eye drops again. He can come back to Brain Pain another day. Today, it’s all about eye pain.

Massachusetts pop-punkers Four Year Strong get simple and sad in their latest video.