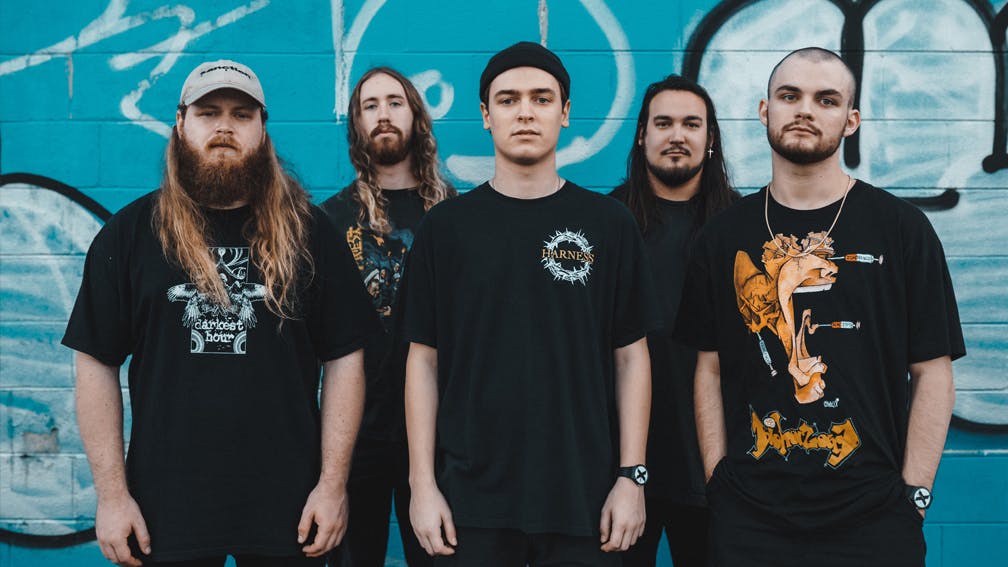 Haunted recording studios are nothing new.

Rick Rubin’s The Mansion in Laurel Canyon, CA saw ghosts reportedly emerge as nebulous shapes in photos taken for of the Red Hot Chili Peppers’ Blood Sugar Sex Magik and harass Corey Taylor for a solid six months during the recording of Slipknot’s Vol 3: (The Subliminal Verses). Arctic Monkeys have claimed that the spirit of a young girl called Elsie appeared on tapes for Favourite Worst Nightmare taken at The Garden Recording Studio in London. While putting together his 1977 masterpiece Bat Out Of Hell, Meat Loaf has went on record to say that a poltergeist-like woman in white tore up the house he was saying in, adjacent to the Bearsville Studios in Woodstock, New York.

Most of the time, though, a place’s reputation precedes it. That wasn’t the case when Knocked Loose retreated to hardcore uber-producer (and Fit For An Autopsy guitarist) Will Putney’s Graphic Nature Audio in Belleville, New Jersey to write and record their stunning, just-released second LP A Different Shade Of Blue. Ignorance, though, is no protection against things that go bump in the night.

“It’s not a funny story,” frontman Bryan Garris grimaced when we sat down with the band to broach the tale they had been teasing in the Oldham County woods earlier this summer. “It really freaked us out…

“We went to the studio in Belleville across two separate sessions, so that we could be secluded and focus by ourselves. We would wake up, eat breakfast, write, eat lunch, write, eat dinner... and the guys go to bed while I went to my room to write lyrics by myself until the early hours. It was winter, so we didn’t even want to go outside.

“One day, everyone except Cole (Crutchfield, guitar) had finished writing and gone downstairs to the separate space where we’d make food and play videogames. Cole was in the studio by himself and phoned Pacsun (aka Kevin Kaine, drummer) to get him to ask Randy – one of the studio techs – whether he could take one of his Polars. Pacsun pretended to put the phone on hold, but when he came back he could hear this strange old-fashioned music and the sound of a woman laughing. Cole was still on the line, but didn’t hear any of it. Pacsun was a little uneasy after that.

“The next day, we started writing late. We were joking around, fucking with Pacsun, telling him there was a woman in the walls out to get him, so we decided we should write a ‘scary’ song. We just turned off all the lights, lit some candles and set about it. As we’re writing, we keep thinking we’re hearing stuff, or seeing things out of the corner of our eyes, but we convince ourselves our minds are just playing tricks, getting us creeped out. Then Pacsun’s headphone’s start picking up that weird radio signal and he jumps up freaking out because something touched his leg. It’s not uncommon for amps to pick up stray radio-signals, but when he noticed that the crucifix charm from his bracelet had somehow come detached despite being totally undamaged we all began to wonder. He had to disassemble it to put it back on!”

“We asked Randy whether the place was haunted, and he just kept telling us he didn’t know. When I was joking about the woman in the walls, though, he told us that there was actually a space drywalled off for some reason, right behind where Pacsun was sitting.

“We decided that we should finish the song anyway. I remember running into the control-room and hitting record on a demo, and Cole played through this amazing improvised melodic black-metal part after everyone else had stopped. We all just let him do it, because it sounded so cool. We were all in the control-room, listening back, when Pacsun said we should put a sample over the top and Isaac (Hale, guitar) knew he had the perfect one: [a mocked-up news report of a father killing his entire family]. Somehow, it fit perfectly. We were all just sitting there listening to it back with cold chills. Then, just as I sat back and said, ‘There’s the song!’ all the power in the room shut off.

READ THIS: Why Knocked Loose are getting personal on album number two

“We still don’t understand why. There was no way anyone could have done it without someone throwing switches in a totally different room, but everyone was there with us. I’ve heard stories of things that happen to other bands, but it’s not our place to tell them. We were all really freaked-out – and we had to stay there for another month and a half!

“We kept the name In The Walls for the song, and even used the guitar recording right off the demo. We wrote under the pressure of feeling scared, which worked out perfect. I feel so satisfied when I get an emotional reaction listening back to our music. That song just feels so clenched, like a panic attack…”

A Different Shade Of Blue is out now on Pure Noise Records.