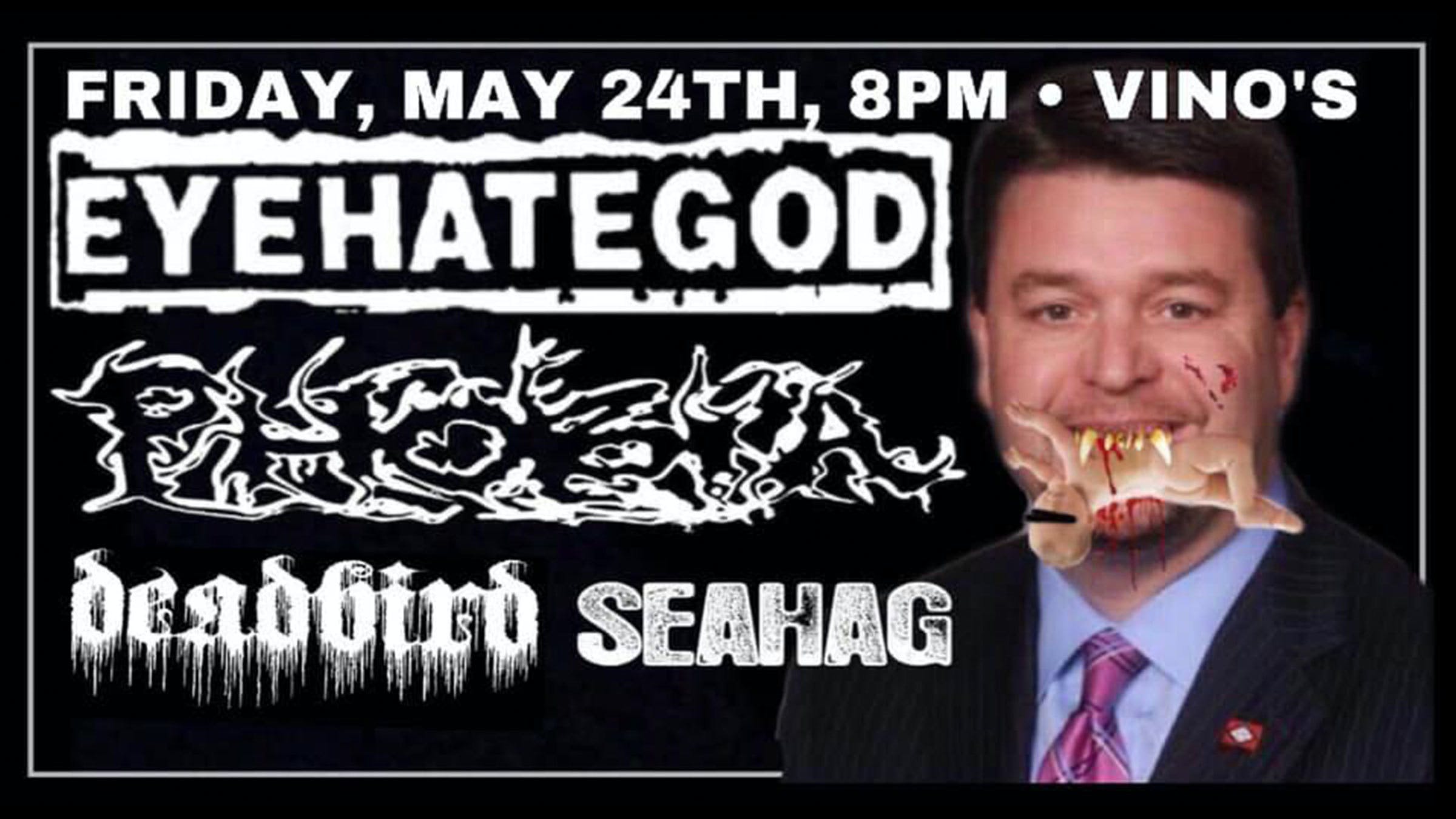 Eyehategod are heading out on a U.S. tour soon, and whoever booked their May 24th show at Vino’s in Little Rock, Arkansas with Phobia, Deadbird, and Seahag has a brilliant sense of humor. The show poster depicts conservative Republican Arkansas State Senator Jason Rapert photoshopped to look like he’s chomping down on a live baby with bloody fangs.

The State Senator, whose record includes passing measures banning same-sex marriage, trying to impose America’s strictest ban on abortions, and installing a 10 Commandments monument at the secular State Capitol, is having an absolute temper tantrum.

“Friends, I rarely share with you the hateful posts and pictures that extreme liberals make about me to torment my stand for better moral values. But this time I want you to see what they have done. They use my image on an event without my permission and they depict me “biting a baby” in my mouth. A wicked and evil depiction on an event entitled ‘Eyehategod’. I call on Vinos in Little Rock to cancel this event and apologize for such a disrespectful image that shows the dehumanization of babies lives. It is disrespectful of all who value babies lives and people of faith. They also clearly welcome the Satanic Temple in another post I am sharing. I urge you NOT to frequent Vinos and stand against their hateful rhetoric.”

The post is funny enough, but the comments are even better. Some of the best came from metal musicians:

Jon Reid of Portland bands Hands Of Thieves, Megaton Leviathan, and formerly of Lord Dying commented, “I can hear this being read in that dumb hick politician voice, ‘an event cawlled Eye Hate God…’ You should be lucky you were even mentioned in the same sentence. By the way Jason, it's a band that's been around for 30+ years that is known worldwide. If you like them, you should check out my old band Lord Dying. We played Vino's about 5 years ago. If they come through again, I'll see if you can get on the guest list.”

Bob Brinkman of Ohio’s Bridesmaid said, “Sen. Jason Rapert, have you tried not eating babies? This wouldn't happen if you didn't eat babies.”

It was also shared by Eyehategod guitarist Jimmy Bower, and though he didn’t comment, it’s safe to say he thinks the whole thing is pretty hilarious.

The venue may have changed the header image, but the Internet is forever.