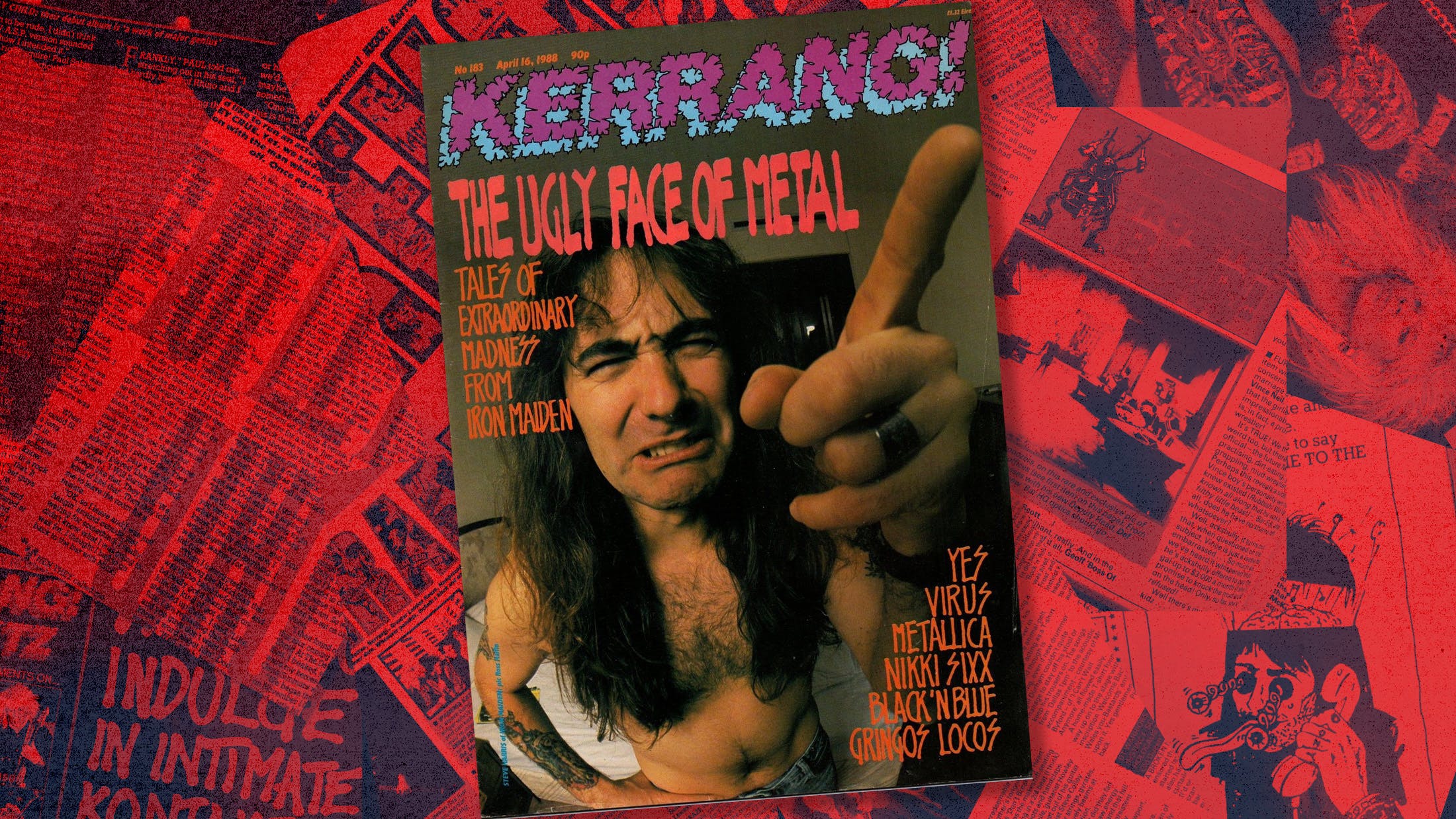 It was a very different world in April 1988. Kerrang! was no different in its, er, being very different either. And yet as the old saying goes, the more things change, the more they stay the same. Confused yet? Yeah, us too a bit. Sorry about that. We'll crack on now.

Thirty years ago this week, Iron Maiden's Steve Harris adorned the cover of Kerrang!, one week after the band had released their seminal Seventh Son Of A Seventh Son album. Here, we take a deeper look inside the pages of that very issue. Maybe you'll learn something. We definitely did.

First up, let's have a look at the big news that week, shall we?

As Wikipedia reliably informs us, elsewhere in the world Sandy Lyle had just become the first British golfer to emerge victorious at the U.S. Masters, Luton Town FC were about to beat Arsenal in the Littlewoods Cup final thanks to a 92nd minute winner, and the UK government had just announced that nurses were about to receive a 15 per cent pay rise. But in the world of rock, the biggest news was that Poison were dropping off the bill of the '88 Castle Donington show. The piece mentions contractual difficulties and some confusion over whether they were even meant to play in the first place, but the real takeaway here is the price and purchase method of tickets. For a meagre £17 you could see Iron Maiden, KISS, Guns N' Roses and David Lee Roth. Better yet, it appears you had to send a cheque or postal order along with a self-addressed envelope, then wait 28 days to get your ticket. Madness.

Here at Kerrang!, we've always prided ourselves as being the first place to bring you the best new bands first. When we back a band, we like to think that's a seal of approval and mark of quality that our audience can trust implicitly. On this occasion, we were putting our support behind LA hair metal sorts Warrant, who we reckoned were "heavier than Poison" if you needed extra incentive to check them out. You'll notice that we've deliberately cut off the quote from vocalist Jani Lane that accompanied this pic, because frankly it's better for everyone that the world doesn't see that in 2018. It was a different time…

At this point, the world had yet to hear the majesty of Metallica's 1988 opus, …And Justice For All. In fact, no-one outside of the band even knew what Metallica's new album was going to be called until we dropped this world exclusive, super casual-like. We caught up with drummer Lars Ulrich in the studio in this issue, with the Dane giving us a hell of an insight into songs that would eventually go down in metal lore as stone cold classics. "We don't care what people think or expect," he said, "we please ourselves first and foremost." Handy, then, that in doing so, Metallica also delivered one of the finest albums of their illustrious career.

The K! rating system has always been a thing of wonder and inscrutable Korrectitude. In 1988, our guide for what each rating represented went as follows - K: Kompost! KK: Klueless! KKK: Kompetent! KKKK: Korrosive! KKKKK: Kolossal!

And in this issue, Iron Maiden appropriately scooped all 5Ks for Seventh Son…, Acid Reign were awarded a fence-sitting three and three quarters (that shit wouldn't fly now) for Moshkinstein and some band called Undertow, that not even the internet seems to know, got a bit of a kicking with a Klueless 2K score for their album, Ghost. Maybe that's why we never heard of them again…

Before the days of Twitter and Facebook, magazines actually used to get letters from their readers. We of course called our page Kommunication back then, such was our dedication to all things K!. In this issue we had someone wondering what happened to Witchfynde, someone else sticking up for Anthrax and another letter taking us to task for a recent Zeppelin review. We also had not one, but two pretty sharp pieces of satire from our readers on thrash and AC/DC. Retweet, my dudes, retweet.

Remember earlier on when we said it was just a different time? Well, this classified ad pretty much proves that. We have so many questions about this. 'Record company'? 'Female rock band'? Questions that are probably best left unanswered in retrospect.

Okay, this one really kills us. As avid old school merch aficionados, seeing that you could pick up all these sweet shirts for next to nothing in 1988 just doesn't seem fair. Official tour American imports, no less. Seriously, £7.95 for these back then probably equates to about £35 on a merch desk today, or even greater, eye-watering amounts if you were to buy 'em second hand online.

Aaaaaand right at the back of the issue, we have our cover story feature on Iron Maiden, where we joined the band on their travels through Germany. In it, all manner of salacious tales from the road are shared, there's a terrific photo of the lads wearing nothing but towels and smiles, and you have Steve Harris and Bruce Dickinson in top fighting form.

"If Number Of The Beast brought heavy metal properly into the 1980s," the vocalist stated, "then with Seventh Son Of A Seventh Son, I think we've shown the way for heavy metal in the 1990s!"

"How we're ever going to follow it up though," the bassist said with an exasperated shrug, "fucked if I know!"

You needn't have worried, Steve. It all worked out okay in the end.