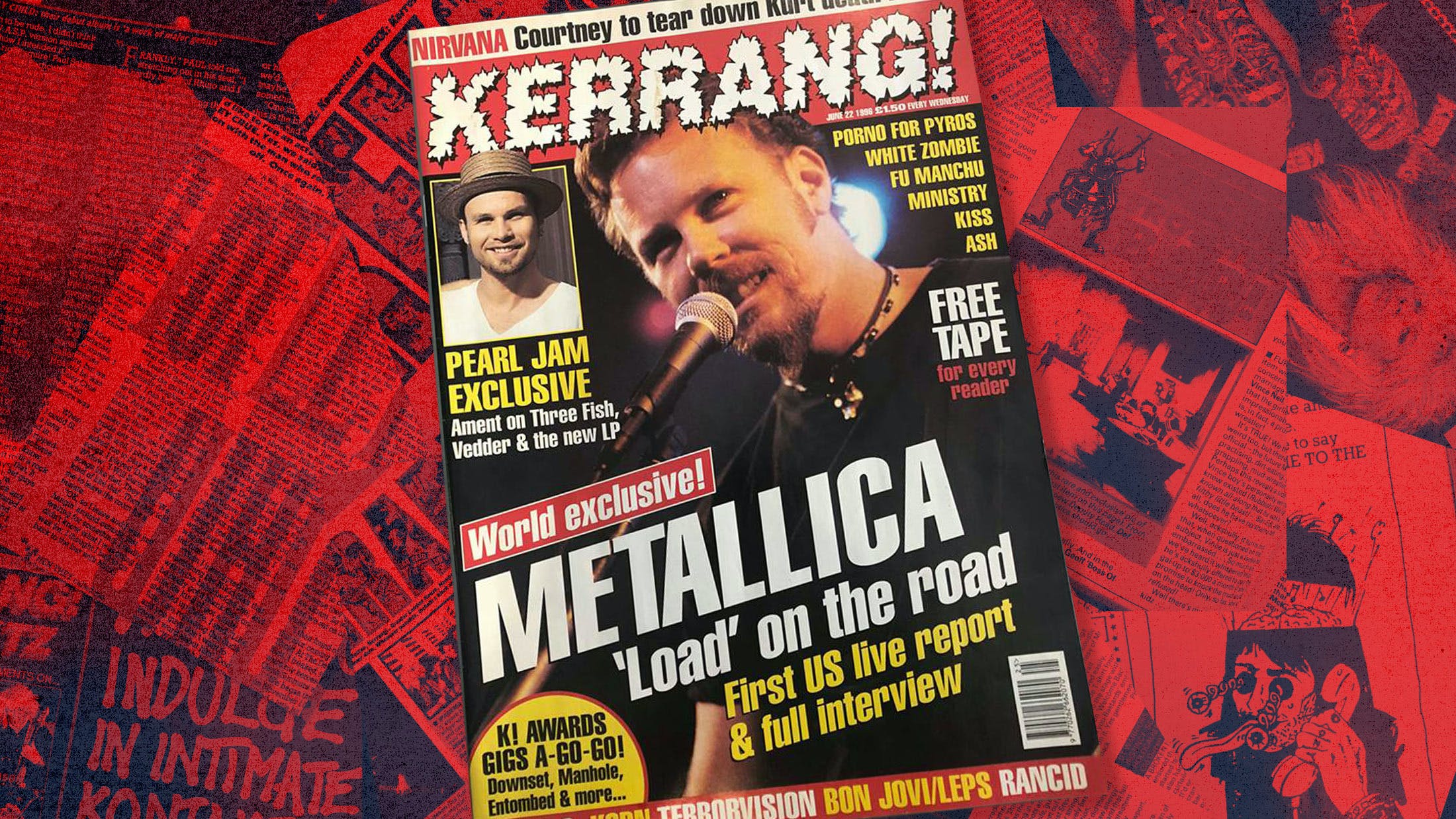 Oh, here we go. June 1996, is it? Ugh. Do we have to? Well, yes. Yes, we do. Because you’ve clicked on this now and that means we’ve basically entered into a mutual bandwidth agreement that must be honoured, lest we piss off the overnerds from Lawnmower Man 2: Beyond Cyberspace – the 1996 sequel to hilariously wrong, naïve pre-internet, pre-VR nightmare vision of how computers might work in the future sci-fi scare, Lawnmower Man. The mutual bandwidth agreement must be respected, friends. Respected and kept sacred.

Did you know that in 1996, the United States tried to catch up on the rest of the world’s hundreds of years of soccer enthusiasm with the launch of their MLS pro league? Now you do. Elsewhere, Kofi Anan was appointed head of the UN, while in the UK Charles and Diana got divorced, and the Spice Girls became a thing after their smash hit debut single Wannabe obnoxiously annoyed its way to the top of charts all over the globe. In the relative kosy bubble of Kerrang!, we were trying to get our heads around the fact that some of Metallica now had short hair and they had a new album out called Load – their first since becoming the biggest metal band in the world on their eponymous ‘Black’ blockbuster, five years before. Jeff Ament also gave us a lovely smile when we snapped him for the big Pearl Jam exclusive on our cover. Probably just thinking to himself how lucky he is that he’s a man who can wear literally any hat and make it look the business. Fair play to Jeff's head.

Anyway, let’s get on with having a mean-spirited point and laugh at what else Kerrang! was concerned with in the summer of '96, eh?

Actually no, let’s go back to Metallica and Load for a second. Here, in news, going that extra journalistic mile for all our loyal readers, we were clearing up then-rife rumours about the album’s “controversial” artwork, specifically about guitarist Kirk Hammett’s semen being on the cover.

“It’s not true,” the affable axe-man insisted, before going on to say lots of things about art and blood and categorically not saying anything about whose particular penicular deposit it was, thus ensuring that we got to raise a half-hearted retrospective eyebrow and then make up the word penicular. All in the name of shit-stirring and juvenilia. You're welcome.

Speaking of all things collegiate, get a load of this. It’s only the bloody Jesus Lizard making dubious claims that Hole vocalist and guitarist Courtney Love had “the hots for” their very own fret-abuser, Duane Denison. ‘Singer’ David Yow said she brought his mate chocolates on Lollapalooza in some kind of rubbish attempt at flirting the year before. And that was basically all we had on that. Mad what passed as news in 1996 really.

Side note: you never really hear of anyone having "the hots" for anyone anymore, do you?

And then there’s this. Apparently the modern world’s fascination for all things nostalgia was alive and well in 1996. We at Kerrang! were no different and seemingly (almost) as good at tooting our own horns as we are in this very web feature every week. Exhibit A: this proto throwback franchise ‘one year ago in Kerrang!’ where it seems that the aforementioned Ms Courtney was rushed to hospital exactly 12 months prior to the publishing of that issue. Somewhere in the deep web there's a Duane Denison and chocolate-shaped conspiracy theory doing the rounds.

We low key dropped news about one of the greatest live recordings in all of alternative music, with this titbit mention of Alice In Chains releasing their MTV Unplugged performance as an album. And then we used a picture of Jerry Cantrell with Ben Stiller on the set of The Cable Guy as the lead image, because that’s the real quiz. Or so we thought.

Then there’s this gem, featuring pretty-much forgotten British-grunge (if you’ll allow the oxymoron) act Skyscraper. Or more specifically, the misfortune that befell their guitarist Vic Kemlicz while on his stag do. As a result, the band had to cancel their entire UK tour thanks to Vic being an absolute turbo lad. Details of the ‘Scraper lad’s scrapes included being: “trussed up in gaffa tape, blindfolded with a rubber Bill Clinton mask, and then being dumped semi-naked at five o’clock in the morning” in an area of London where locals were arsed enough to snitch to the cops and in the ensuring “confusion” he broke his right wrist and had to wear a cast for his wedding. Oh, mate…

In other '1996 was a weird year' news, we were reporting this little gem. Apparently Foo Fighters man Dave Grohl held a seance at his house in Seattle with his wife, only to discover that the property was haunted by the spirit of a Native American woman who murdered her baby 100 years ago. Delightful stuff. And if anyone was thinking Dave had lost his marbles, apparently the whole street he lived on had experienced something going bump in the night. Or in the case of underappreciated grungers Tad, a flying plate while they were recording in a nearby studio. Spooky.

Here's a sign of the times. A fun little box-out detailing everything you could possibly want to know about upcoming screwball comedy sequel, Ace Ventura When Nature Calls, starring the 'rubber-faced' Jim Carrey. That amounted to three whole points, one of which isn't even about the movie and not once did we shoehorn in a mention of Cannibal Corpse. No idea what we're on about? Educate thyself.

(yes, we know that was from the first one)

We were sticking up for one of our own and taking other members of the press to task for being dismissive about the success of Bush in America. Apparently The Daily Telegraph said the band were "not very good" and that really got our goat it seems, so we issued the following riposte: "It's possible the people at the Telegraph are talking out of their collective arse."

We were asking the big questions too. Who the hell is Bryan Adams?

Oh, you mean the same Bryan Adams who was awarded The Kerrang! Album Of The Year in 1985 for his excellent Reckless record? How soon we forget.

In other, 'Oh boy, Kerrang! you got that one wrong' happenings, here is our Singles reviews page. We deemed Green Day's Brain Stew/Jaded worthy of a mere 3Ks and absolutely went to town on tearing No Doubt a new one, giving their latest single Just A Girl a 1K-kicking. We even claimed that Gwen Stefani sounded like Geddy Lee. No idea what we were thinking.

That free tape for every reader offer we were running in this issue? Hell of a deal. Especially when you consider that it was a two-track sampler of "smart new Brit Feeder" who we reckoned sounded like Mother Love Bone meets Smashing Pumpkins.

Not sure about that last bit, but at least we called it right backing that particular horse. It's good to know we didn't always get it wrong in '96.

But you can't win 'em all. Case in point – here we were foolishly getting excited about the Sex Pistols reformation show at Finsbury Park. Ever get the feeling… oh never mind.

We had this fun little catch up feature with loveable choonster Tim Wheeler from Ash. There's loads of reasons to look back at this one fondly, but our favourite bit is where we asked him when he last ran around pretending to be an aeroplane. Remember doing that as a kid? Turns out Tim had done it the previous September, the scamp.

Second side-note: did anyone else ever stick their hood up and hang their coat over their back while running around pretending it was a cloak and they were superhero? Just us? Oh alright then. We'll get our coats.

And pretend they're superhero cloaks.

And before we go too far off into the deep end, it's probably best we wrap this one up swiftly with one final look at our cover feature with Metallica. We joined the metal behemoths on the road in U.S. where they were treating 8,000 lucky Californians to the first live performances of songs from Load.

It was a free show, announced last minute and played in the back of a truck in the car park of a Tower Records store in 80 degree heat. They played So What, Creeping Death. Bitch, Until It Sleeps, Sad But True and Whiplash. Imagine being there?!

James Hetfield probably summed up the spirit in the camp at the time most succinctly when he said:

"When everyone's stopped talking about fucking haircuts and make-up and all the other shit, there'll just be the album"

Like an awful, unwanted Lawnmower Man sequel, we'll be back with more of this kind of guff soon. Okay, bye!