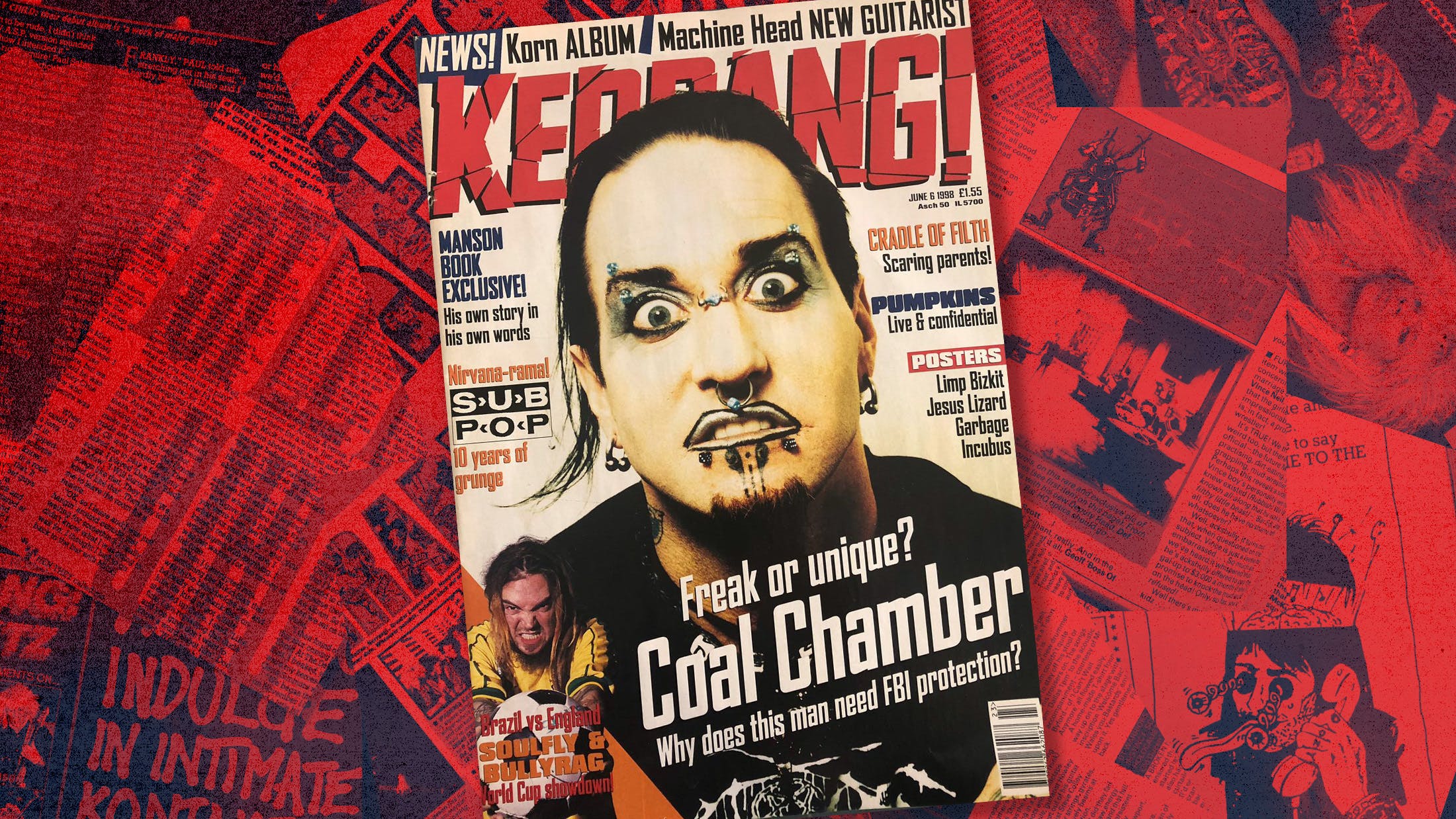 Oh here we go. Back once again with only the ill-est of ill behavior, it’s your favourite weekly rock Tardis, This Week In Kerrang! History.

So, who fancies revisiting the halcyon summer days of 1998, then? It might feel like it was only yesterday for those of somewhat advancing years, but sorry to remind you all that it was actually a pretty eye-watering two decades ago now. That's a whole legal-age drinker and change (if you’re in the UK - you'd need a damn good fake ID to get past bouncers in the U.S of America).

Time, it seems, is very much not on our side despite what we were once erroneously led to believe by The Rolling Stones (who, in a cruel twist of fate, now appear to bear the marks of its crushing, relentless march. Funny how things work out). With that in mind, let's get on with this quick smart.

For full context, here follows some June 1998 happenings of interest and/or semi-note:

The search engine to end all search engines was founded, when Google launched and changed the internet forever. Endless scenes of ladies having long lunches and engaging in bawdy chatter was all the rage as Sex In The City aired for the first time on HBO. Jim Carrey-starring paranoia classic The Truman Show debuted, going head to head against the terrifically-soundtracked Godzilla for blockbuster supremacy. France were about to win their their first ever World Cup and on their own patch no less. Microsoft launched their Windows 98 operating system just as Apple unveiled its debut range of iMac machines. And in the UK, the two pound coin was introduced into circulation for the first time.

On the cover of Kerrang! we were poking an unsure journalistic stick at the weird world of nu metal, with Coal Chamber chap Dez Fafara fronting our investigation as we asked, 'Freak or unique?' and wondered, 'Why does this man need FBI protection?'

The times, they were loco, friends.

How about we start with a swift glance through that week's news, eh?

Well, it turns out that even back in 1998 those scamps Limp Bizkit just loved pulling the absolute crap out of our legs, as they claimed to be in the process of making a "zany" '70s-inspired buddy cop comedy called Weapon And The Liquidator. In fairness, we can't blame them for taking the piss out of us. After all, we seemed dead set on repeatedly calling Wes Borland 'Wes Boorland', for some reason. A month later Weapon and the Liquidator were revealed as aliases of Durst and Wezzy B as they made cameo appearances at the start of the band's video for their aggy cover of George Michael hit Faith. Oh well.

In other news, nu metal behemoths Korn were having some trouble in the studio as they busied themselves on album three, Follow The Leader. So much so that they sacked producer Steve Thompson and promoted engineer Toby Wright. Vocalist Jonathan Davis - always a man with a colourful way with words - issued a warning about their upcoming Children Of The Korn track: "People are gonna fucking shit themselves and fall to the ground when they hear this. It's just so bad-ass."

Remember all the way up there when we mentioned the summer blockbuster Godzilla? And its really pretty decent soundtrack? Well, here is a photo of Led Zeppelin's legendary axe-wrangler Jimmy Page with his great mate Puff Daddy (pre-Diddy days, obviously). The pair were just hanging out enjoying some bants at the premiere when our snapper caught them presumably chatting about what great mates they were. Oh and the fact that they were coining it in thanks to the global chart success of Come With Me, one of the breakthrough songs from said movie soundtrack, featuring 'Daddy doing that sort-of-not-really-arsed speaky-shouty thing he does over what is essentially just Zeppelin's Kashmir riff played over and over again. It didn't take much, back then.

How about this harmless bit of fun, where we went along with cuddly spooky sorts Cradle Of Filth and a BBC camera crew as they filmed a fish-out-of-water style documentary called Living With The Enemy. The band kindly invited Selby mother and daughter duo Janet and Lynn to join them on the road in France for five days. Janet apparently hated the band because of growing concerns about their influence on her 18-year-old son Luke (who rather oddly, wasn't invited to take part - GUTTED for you Luke, mate!). One of the highlights was when poor Janet clocked the band's infamous Jesus Is A C**t T-shirt and was left horrified.

"I think that every person who wears that on the streets should be fined ten thousand pounds," she declared with frightening specificity.

SWAG time! And in this issue we were offering readers the chance to win all sorts of madness. Girls Against Boys Freak*On*Ica CDs and stickers? Pretty cool. A Playstation (one, as it was the first one, obviously) AND £50 worth of something called Insignia deodorant? Like, as well as the PS1? Pretty, pretty cool - sign us the eff up.

We also recommended buying this sweet-ass Satan/Fish logo T-shirt and a drink called Reef. Presumably we owed our mates in the band of the same name a favour or something. Now that said favour has been repaid in full though, we'd just like to state for the record that other soft drinks are available. Probably a lot more available than Reef, too. As we've not seen that in shops in yonks.

Remember all the way back up there when we mentioned France were on the brink of winning their first World Cup that summer? Well, it wasn't just a weak excuse for us to use this smart-arsed call back and get all meta (though it definitely is that, too). No, we were in the fullest grip of World Cup fever. Here we have Deftones' Mr Chino Moreno looking absolutely cock-a-hoop to be modelling the Kerrang!-branded 'classic England football shirt', which was inspired by the 1966-winning jersey.

It was on sale through the mag for a genuinely reasonable £14.99. It came in size XL only, alas. But we're not even going to touch the open goal of a gag that presents us with, because it's 2018, we're better than that and well, we're still trying to shift the last remains of our Christmas weight ourselves.

Moving slowly, sluggishly and out-of-breathedly on, let's have a look at some features instead, shall we?

And yet again, we were seemingly not letting the football thing go that easily. Here we have Soulfly and Brazilian soccer nut Max Cavalera and Robbie Awok from somewhat sadly forgotten Scouse rockers Bullyrag, running the rule over their respective nations' prospects for the tournament ahead and sharing their fondest memories of the beautiful game.

'Who will win the World Cup?' we cruelly asked Robbie, putting him right on the spot and unwittingly stitching him up two decades in advance.

"It'll be a toss up between England, England and England. I predict England because I did a Ouija board last week…" he confidently told us.

England proceeded to crash out of that summer's tournament in the Round Of 16 phase, losing 4-3 on penalties, because of course they bloody did.

Elsewhere in the issue, we were very cheeky indeed and asked Smashing Pumpkins' nice guy guitarist James Iha a few probing questions. Apparently we were curious about what his first sexual encounter was like, what was in his wallet and whether he'd ever been arrested. Ever the perfect gentleman he declined to delve too deeply into such personal affairs, but he did offer this terrible joke instead:

"So, this grasshopper goes to the bar and asks for a beer. The bartender says, 'Do you want the drink that's named after you?' and the grasshopper goes, 'You mean John?"

So, what else did we have in that issue? Oh yes, we were slap bang in the middle of a three-part deep dive into the never-a-dull-moment story of Marilyn Manson, with our serialised adaptation of his autobiography The Long Hard Road Out Of Hell. If you've never read it, stop reading this nonsense immediately and read that instead. It's really good. Unlike this.

We also shone a spotlight on Sub Pop Records, as the Seattle label celebrated a decade of doing business. That meant insight into the rise and influence of artists like Soundgarden, Nirvana, Mudhoney and Mark Lanegan.

"Without Sub Pop's involvement [that music] probably would have remained in the underground," Mark Arm told us.

Imagine a world without any of those artists ever making it? All hail Sub Pop.

This week's Single Of The Week? The mighty Be Quiet And Drive (Far Away) by Deftones, which was correctly awarded the full 5K compliment by our guest reviewers, Jacksonville nu metallers Cold.

And finally, to the question that's no doubt been plaguing you all since you clicked on this. Sorry to keep you waiting.

So, why does Dez Fafara need FBI protection? Well, it turns out he got into some bother at a show Coal Chamber played with Type O Negative in New Jersey, where some neanderthals insulted his girlfriend with racial slurs, Dez reacted and a brawl broke out. The next time he and the band rolled through town 12 off-duty cops and 15 FBI officers were assigned to protect him, thanks to subsequent death threats. Scary stuff. And certainly not something that offers much of a chance for a pithy follow-up comment. So we'll it there for this week.