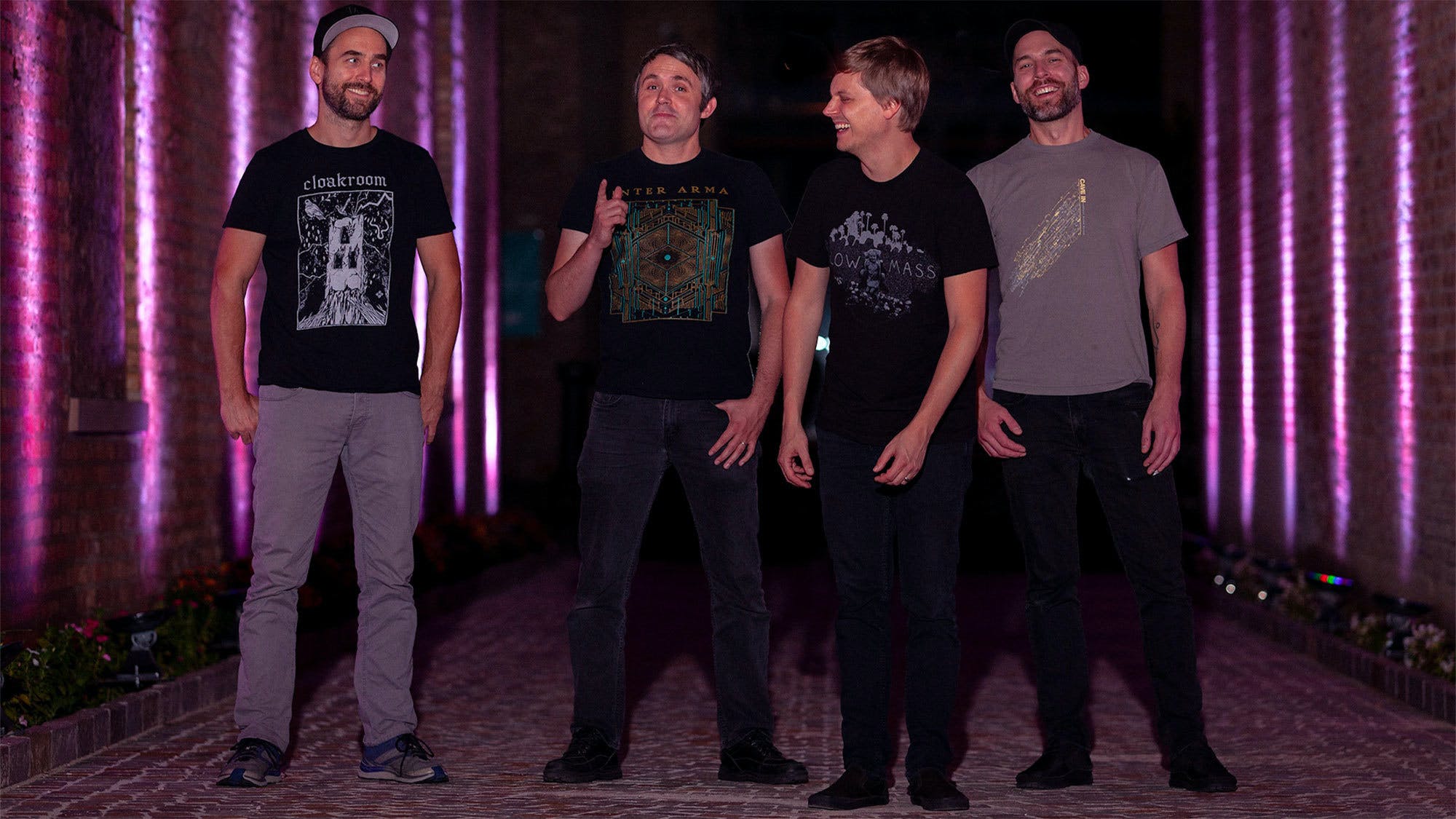 It’s been an unprecedented six-year wait for a new Pelican full-length to arrive. In that time, guitarist Trevor Shelley de Brauw and rhythm section siblings Bryan (bass) and Larry Herweg (drums) have fully integrated new-ish co-guitarist Dallas Thomas into the band’s creative process, who replaced original member Laurent Schroeder-Lebec in 2012 and helped with some of the writing for the following year’s Forever Becoming.

Happily, Nighttime Stories is ample reward for the patience of the instrumental band’s audience. Perhaps their most immediately engaging record to date, it mixes ferocious sonic attack and emotionally resonant finesse. As Trevor tells Kerrang!, its extremes of joyous abandon and crushing grimness reflect a period marked by loss and uncertainty.

Did you plan to have such a long break between albums?
“There were a lot of life obstacles in the path of creating new music. Dallas had a kid and lost his dad in the span of a year, so there were long blackout periods when we just weren’t able to work. Also, I feel like we could have time-managed ourselves a little better. Over the span of the six years, we were more geared towards getting together to play shows than we were focusing on writing. We wouldn’t have as much time to write because we’d be busy learning how to play our songs again (laughs).”

The world’s in a very different place to where it was when Forever Becoming came out. Has that affected the way Nighttime Stories ended up sounding?
“All of us are feeling a tremendous sense of frustration with the world, and I think that that’s exacerbated when you have young children. I would like to believe that I was bringing my children into a world that was on the path towards something better, but right now, it feels like we’re on a wild pendulum ride to the other side, and it’s frightening.”

Let’s talk about some of the tracks. Midnight And Mescaline sounds like one of your most direct, almost catchy tunes.
“Yeah, that’s why we put that one out first. I think, if I’m not mistaken, it started with Bryan and Larry writing pretty much the bulk of the song on bass and drums, and then Dallas and I figured out parts to play on top of it. I love that style of song, and I really love writing with a tight rhythm section that has their parts down first.”

Yeah, it feels to me like this album is not just about the head, it’s about the hips! There’s a bit of funk in there, like on Abyssal Plain…
“(Bursts out laughing) Yeah, I saw some German review that referred to that song as sexy – which is not usually an adjective applied to our band!”

Cold Hope is a heavy tune – was it liberating to kick out some crushing jams again?
“Yeah, for sure. That was one that originated with a few riffs that Dallas had, and I think that’s a perfect example of one of those songs that started someplace simple, and then when we got in the practice space it opened up. I think when we first wrote, we jammed the end-section for about 10 or 12 minutes, and then it was just a case of, ‘How do we scale this back and get it under control?’ (laughs)”

And then directly after that on the album, there’s It Stared At Me. Was it a deliberate change of pace to position that after Cold Hope?
“Yeah, I really wanted that song on the record to break up the density of the material, because it’s probably our most pedal-to-the-metal album in terms of heaviness. It almost didn’t make it on the record though, because the way I envisioned the song was drastically different from what Larry and Bryan wanted to do with it. I’d layered all these synths on it, and I had all these shredding guitar solos. The Herweg brothers were not feeling it. At all. And eventually we reached the compromise that it would have sparse, slow drums, and once we had Larry’s drumbeat, we just rebuilt the song from scratch. And it’s almost my favourite on the record, because it’s so satisfying to have pulled it all together at the eleventh hour like that, and it’s a really different space to any of our other material.”

About a minute into Arteries Of Blacktop, there’s a really rock’n’roll feel, like you could almost imagine Axl Rose suddenly appearing and doing some vocals.
“(Laughs) Yeah, that was the very first riff that we wrote for the entire record, and it was also the last one that we finished writing – that was the one that took five years to write. I did, for a long time, picture that as a vocal song, but it probably wouldn’t have fit, especially the way the song ended up turning out. But I was thinking of more sort of hardcore vocals, which probably would have turned a lot of people off!”

And then right at the end of Full Moon, Black Water, there’s a really melodic bit that sounds like ‘90s emo to end the album.
“Yeah, that’s the scene I came up in, ‘90s emo (laughs), so it’s certainly not an accident that it came out [like that]. All of the stuff that we came up listening to is etched into the DNA of how we approach our instruments, it all bubbles to the surface one way or another. It felt like the structure of the album, starting on acoustic guitar (on WST), then there’s the breather in the middle with It Stared At Me, and (at the end) that song drifted off into somewhere a little more serene. It gives the listener a reprieve after all the crushing heaviness that precedes it.”

What’s the significance of the album’s artwork?
“As has been the case with the last several records, we picked photos by our friend Andrew Weiss. And the title of the album is borrowed from our friend Jody Minnoch, who sang for a band called Tusk that Larry and I used to be in, who passed away unexpectedly in 2014. He’d wanted to do another Tusk record, and he’d proposed an album called Nighttime Stories, and contributed a bunch of vignettes and snippets of potential lyrics, and that’s where we ended up pulling a lot of the song titles from. But when it came time to do the artwork, I felt really passionate about having Aaron Turner do it, because he did the artwork for the three Tusk albums, and I wanted the continuity between that visual world and the world that this album ended up in. Even though this is drastically different from what the Tusk version of Nighttime Stories would have sounded like, I felt that part of the process of doing right by Jody’s memory was to pay homage to him through the artwork as well as the song titles.”

Cold Hope is Pelican's second single off of their upcoming record.

Instrumental genre-defiers Pelican are returning with their first album in six years, and have a new track to show for it.