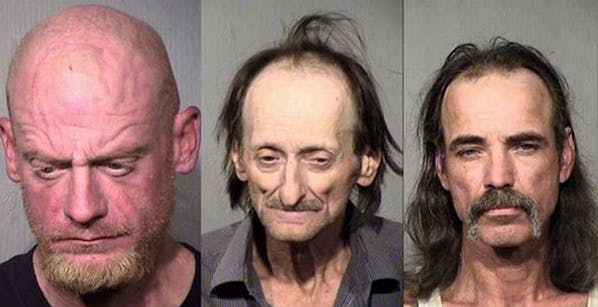 Three men have been arrested by Phoenix, AZ police officers in connection to instruments stolen from Lamb Of God while on tour at the start of this month.

One of Willie Adler’s guitars and a bass belonging to John Campbell were taken from their semi-trailer while the Richmond, VA band were getting ready to play the Ak-Chin Pavilion in Phoenix.

The instruments turned up three days later on online marketplace OfferUp in a listing local to the area. One intrepid fan of the band pretended to want to buy the instruments and attempted to meet with the seller in order to revel their identity, but the seller got cold feet.

The three individuals arrested were 51-year-old Michael Blakeslee, 62-year-old William Widener and 34-year-old Justin Peterson. Blakeslee and Widener were arrested on May 8, while Peterson was picked up the following day. All three were charged with theft and trafficking in stolen property.

While the instruments themselves have yet to be recovered, the police report states that one of the individuals attempted to pawn one of the guitars but was refused.

Responding to news if the arrest, Hatebreed’s Jamey Jasta posted a picture of the three suspects on Instagram and, referring to their, errr, memorable appearance, wrote: “The bad news is you’re going to jail, the good news is you’ve been cast to star in the next Rob Zombie film!”, adding the hastags #SorryHadTo and #YouThoughtItToo

Lamb Of God frontman Randy Blythe – no doubt drawing on his experience of being charged with manslaughter by Czech police after a man died following a crowd-surfing incident in Prague in 2010 – then commented on Jasta’s post in typically tolerant and considerate Randy Blythe fashion:

“Well, I must say that their, ahem, “aesthetic” doesn’t really surprise me- just kinda makes me sad. But on the 100% serious tip- these men are innocent until proven guilty, & I hope they are given due process and a fair trial. Then, whatever happens after, I hope they get some help. That one Alfalfa looking dude needs a sandwich, about a week’s worth of sleep, and a multivitamin. Jesus. #drugskill#dontdodrugskids”