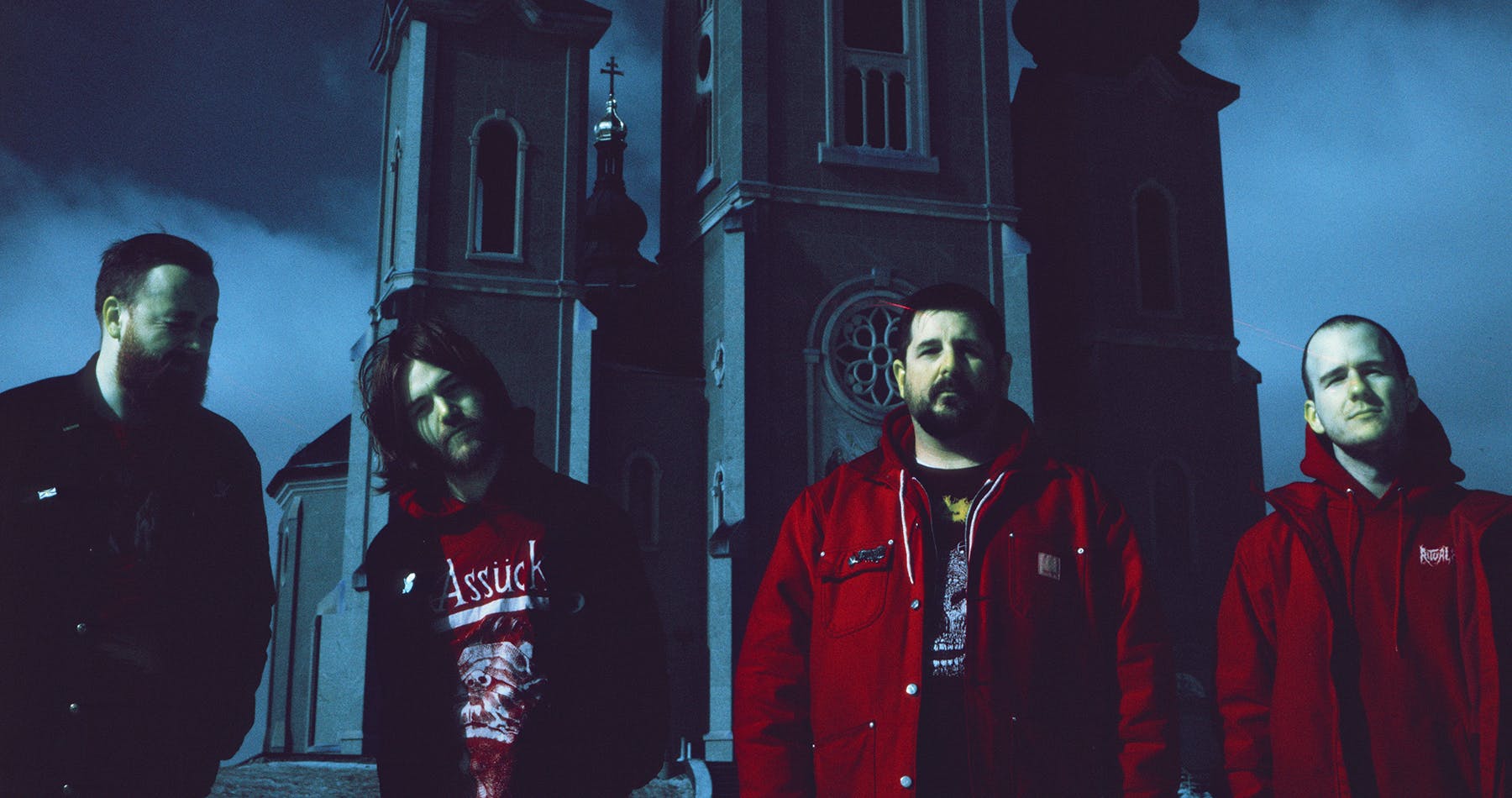 No one thought the fervent hype and fever pitch would ever be this high for Toronto death-metal force, Tomb Mold. Now one of the genre’s biggest and brightest-burning stars, the band was started by guitarist Derrick Vella and guitarist/vocalist Max Klebanoff after a night out with some friends and hours of talking about metal records.

Now a quartet, Tomb Mold have churned out numerous demos and albums over the last three years -- and each effort has been scooped up as quickly as it was released. Last year’s Manor Of Infinite Forms, released on 20 Buck Spin, signaled wider and greater critical acclaim. That, coupled with a quick turnaround and frequent touring, brought extra pressure and publicity to their newest album, Planetary Clairvoyance, out this Friday. Tomb Mold takes it in stride, delivering not only their best album, but also one of death metal’s fiercest and most diverse offerings in recent memory.

Planetary Clairvoyance takes a number of ideas and emotions and wraps them in abstract cosmic gore, a sharp contrast from Manor Of Infinite Forms's concept of a world within our world. Lofty ideas like ego death and past life hypnosis combined with more tangible and certain actualities like heartbreak and death make Planetary Clairvoyance a very personal -- yet almost alien -- piece of music.

Kerrang! caught up with Derrick and Max to talk about, among other things, Tomb Mold’s meteoric rise, how their process has grown, and their gripping new album. After the interview, listen to an exclusive stream of the record ahead of its release this Friday on 20 Buck Spin.

Given how Tomb Mold originated -- you two working at home on tapes, then blowing up -- how have the goals for Tomb Mold changed since inception?

Max Klebanoff: Our goals have changed pretty drastically, but I feel like our process has mostly remained the same. Derrick and I normally assemble the tracks and hash out the structure, then we’ll bring the structured tune to practice so we blast through it as a full band. Vocals are almost always an afterthought. I normally don’t think about structuring lyrics until after we’ve actually recorded our full albums. The main difference between Planetary Clairvoyance and our earlier records is that we paid closer attention to the structure, flow, and sequence of all the tracks so that the narrative of the album would be communicated more clearly.

Derrick Vella: It’s funny, when we started out we said, ‘Let’s be a Finnish death metal band -- let’s be dumb, let’s be chuggly.’ Around the time of The Moulting, we decided to just play whatever we wanted. That -- songs like Vehement Indulgences and Feed the Pain -- feels like the ‘We demand to be taken seriously’ tape. We’re not just trying to do Finnish shit, we’re trying to do death metal.

We started getting more serious, but we weren’t even a real band yet. Our bass player, Steve, said, ‘The moment you make this a real band, I want to be in it.’ Me, Payson, and Max had been in a band, and I’ve known Payson and Steve for like 10-plus years. I asked Payson to be a part of the band and he said yes. Then we wrote and recorded the next tape, Cryptic Transmissions. That’s our ‘No, we really demand to be taken seriously’ tape.

We toured for the first time and at that point, we knew whatever we did next, we were going to put it out on 20 Buck Spin because we got to know Dave [Adelson] by then. Manor Of Infinite Forms comes out and that goes off the chain.

Now, it’s weird. This week, I found old rehearsals of Max and I playing Primordial Malignity in his basement. It used to be so simple. We used to feel like we just made music, now it’s a bunch of shit. We have to plan tours, merch logistics, and interviews while writing stuff and thinking about the fact that we put out a critically-acclaimed death metal record and we’re putting out a new one a year later and it better be good or bye-bye, that’s it.

To hear the evolution of this and how you all continue to push yourselves and challenge your initial vision, it all really unfolds on Planetary Clairvoyance. The first time I listened to it, I said, ‘This does not sound like Manor at all.’

Derrick: Planetary Clairvoyance sounds like a record I knew we could write.

It’s a big record. What’s also been really cool are the different themes of the band. Everyone knows about Dark Souls and Bloodborne video games idea. Do those games still have a presence in the music outside of the band name? It doesn’t seem like it.

Derrick: Not really. It’s kind of there in spirit. Abysswalker on Manor was where people said, ‘Okay, this is a Dark Souls song.’ It’s a song about my pet rat, Artie, dying -- which I named after a Dark Souls character -- but that song is about losing someone. If you look at the liner notes of Manor, the record is dedicated to him.

Max: We have definitely shifted our focus away from those games in favor of more expansive and specific themes. Not that using those games as a starting point thematically is bad, but we did not want to be pigeon-holed as a strictly video game-based band.

Max: Side B of the record represents the final push towards a dolorous end. A vast cosmic mass or space pulls apart, reducing you to your final ashen form to then even further disintegrate into the celestial ether. Most of my lyrics leading up to -- and including Planetary Clairvoyance -- focus heavily the collapse of one’s corporeal form and complete disintegration of somatic and cognitive capabilities.

Derrick: Side A is about a breakup. I broke up with my partner of five and a half years last year. It’s all under this weird guise of planets swallowing themselves whole, passage to spirit worlds, and being reborn. Yet, it’s all about leaving someone or going through life changes.

Beg For Life is pain in exchange for salvation. You can go through pain and be reborn from it. Leaving someone is hard. It’s not always emotionally hard, but your whole life changes. Everything falls apart even if it’s the right thing to do. I think I wrote Beg For Life to say, ‘You have an opportunity for serious growth just like I do. Don’t throw it away. If your chance for serious growth is meeting someone in the next week, then chase it. There are just things about us that we need to let go of.’

Over the last couple of years, I was tired of being a negative person. I was tired of being pissed about nothing, caring too much about the wrong things, and not [realizing] that there is joy to be had in each day. Infnite Resurrection talks about constantly being resurrected, but each time you are slowly deforming. It’s the way we change ourselves to better suit someone else and then we aren’t ourselves anymore.

Tomb Mold is a great way to do this. You find a healthy and productive manner to funnel a lot of these emotions you have and get to turn it into an abstract expression of something new and refreshing.

Derrick: When we finished the record, I sent it to a few people -- my dad and Justin from Innumerable Forms -- because I needed to know if it was good or not. Justin said, ‘This record is better than Manor. It doesn’t sound like Manor, but it sounds like Tomb Mold.’ My dad said, ‘This is the best thing you’ve ever done in your life.’

That felt great. I’m glad it doesn’t feel like a crazy departure or that we’re a different band. It feels like it’s just different enough that I’m happy. We don’t want people to think there is a connection to Manor. This isn’t a continuation of the world built on that album. It’s a separate entity—it is its own thing.

Listen to an exclusive stream of Tomb Mold's Planetary Clairvoyance below:

Here are the 20 most essential heavy bands from Canada who deserve the spotlight, and are causing avalanches in the Great White North…

Tomb Mold's Steve Musgrave doesn't let touring with his brutal death metal band get in the way of his career.

The band's Brooklyn record release gig with Tomb Mold and Daeva was brutal, insane, and entertaining as hell.