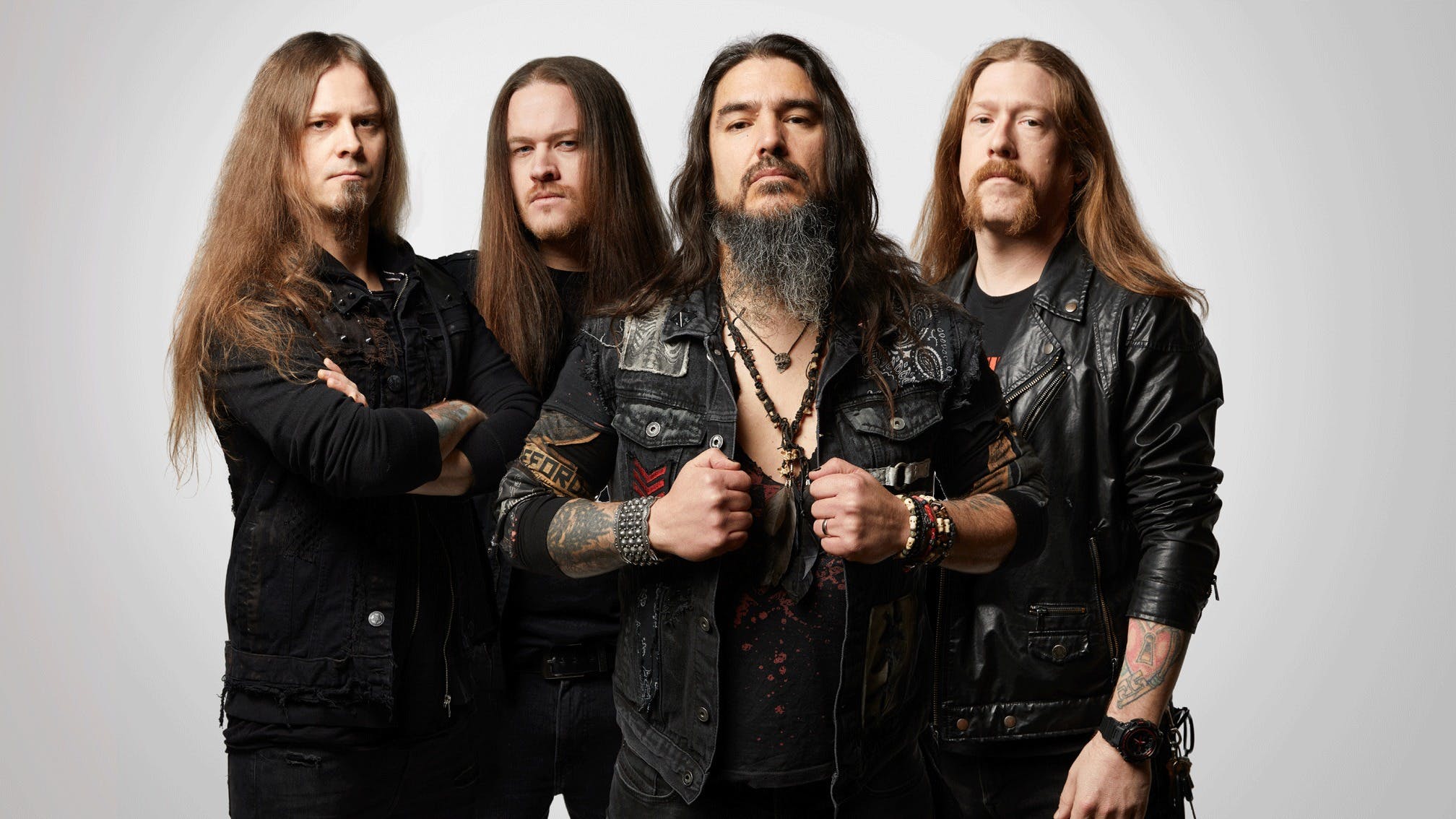 Robb Flynn is not unfamiliar with adversity. As a younger man, he encountered it on the streets of Oakland, seeing violence and becoming involved in drugs. In Machine Head, they were emerging into an early-’90s music scene in which many were saying metal was done and dead. Across the years, he’s faced problems from within – he is the only constant in the band’s almost 30-year history – and from outside. Most recently, 2019’s Catharsis album was subject to much criticism. Shortly after, half the band quit.

But in all this, Robb Flynn has still stood tall and stood by what he’s done. Often, the knocks have only spurred him on. After its divisive predecessor, ØF KINGDØM AND CRØWN is the best thing Machine Head have done since The Blackening, itself a rebirth of sorts after some critics believed the band had run out of steam. As creative as it is angry, it sees the frontman doing real clean singing at some points, while at others it boasts some of the heaviest riffs they’ve ever done. Write him off at your peril, it says.

“I just bulldoze ahead,” he grins today. “I'm pathetically unqualified to do anything else. You know, I've never had a plan B. This is it. This is what I do. I write songs, I fucking put on intense, super-intense performances, I fucking whip the crowd into a frenzy. That is what I do. And if things change in the dynamic of the musicians that are here, then you know, I'm still going to keep on doing what I do.”

It was in a slightly more relaxed atmosphere than normal that ØF KINGDØM AND CRØWN was born. Diary cleared by COVID, Robb continued to play music. Friday nights, he would go and do the band’s Acoustic Happy Hour livestreams, then hang out with his wife.

“My wife and I started having a date night,” he explains. “I’d go to the studio and do the Acoustic Happy Hour, then I’d come home and we’d hang out. It was the first time in probably 13, 15 years that we had really been able to do something like that. Our kids are teenagers and just kind of do their own thing, like watching their phones or the computer. So it was the first time in forever we could really hang out, like, ‘Let's just go get drunk in the garage.’”

It was during one such sesh that Mrs Flynn made a suggestion. Listening to My Chemical Romance’s The Black Parade – “It's one of our favourite albums of all time, we've listened to it forever” – the big themes of the record struck a chord. You should do this, she told her husband, do a concept album.

But she persisted. And she explained the story of The Black Parade. And, “super-drunk”, Robb began to understand.

“She sat there and went through it, song by song, lyric by lyric, and she broke it down for me,” he recalls. “And I was like, ‘Wow, that's fucking really cool. I’ll try it and see what happens.’”

Robb had already been working on music. Stuff was coming, but he was yet to properly get a hold on the shape things were taking.

“Lucky for me, I've got my own studio,” he explains. "I was going down there, and the building owner would let me in – he wouldn't let anybody else in, but he would let me in. I would go down there and just be alone, and have my vocal mic and my guitar, and have my laptop set up. I’d just try ideas, but I didn't really have any lyrical ideas or anything. Somewhere in there, I wrote the intro to SLAUGHTER THE MARTYR, which is the opening track. I was like, ‘I have no idea where this is going like, this could be the end of the record or the beginning.’”

It was another member of his family who gave him what would become the album’s story and concept. He’d started work, and it was classic good vs. bad. And it wasn’t quite sticking. And then he watched TV with his sons.

“At first, my concept was a very American story arc. It was like, good guy, bad guy. Good guy wins,” Robb says today. “It was well written and it was it flowed good, but it just… I couldn't connect to it. I felt like a robot singing words.

“At some point over the pandemic, my kids start watching a bunch of anime for the first time in their lives. They were on their computers all day and they started going down this anime rabbit hole. And you know, unbeknownst to them, I was a super anime nerd when I was a fucking kid. I started off as a Star Wars nerd, collecting all the action figures and the Deathstar, the Millennium Falcon. And then I became an anime nerd, obsessed with Akira, and Space Cruiser. And then I become a metal nerd, trading tapes and collecting imports. So, I started watching all this brand new anime that I'd never seen before with my kids. It was brutal!"

It was Attack On Titan that gave Robb the brainwave. Basically: no-one is the good guy.

“If you've never seen Attack On Titan, it's just fucking weird and psychedelic and brutal and crazy and such a cool story. And it's really long seasons,” he says. “Around like season two or season three, I'm just like, ‘Who's the good guy here? Who's the bad guy? I don't even know what's happening anymore.’ Both sides are so fucked up, but they both believe the other is evil.”

It changed Robb’s perspective, not least because he’d never written like this before.

“I've done nine albums of singing about the world, through my eyes are experiences that have happened to me how I view society,” he reflects. “Now I'm writing through this character who lives in a futuristic, crime-ridden wasteland where the sky is always stained red. And then I got to write from the polar opposite character, who murdered the love of this guy’s life. As an artist, it was super inspiring. It put me in a different headspace to write music, and it was really cool.”

Machine Head, not for the first time, are back on an upswing. Ask Robb if he’s stubborn, and he laughs and shrugs and says, “Kinda.” Ask him what it is that keeps him going and, away from remarks about not being able to do anything other than be the frontman in a metal band, there’s something more. Truthfully, like Ozzy, Robb Flynn can’t help but do this.

“I started playing thrash metal when I was 16 years old. I was playing [infamous Bay Area thrash club] Ruthies Inn. You know, backyard parties, living rooms, keggar parties. My friend's parents would go on vacation, and then my friend would throw a party, like, 'You're gonna play in my living room!' We were playing VFW halls and church community centres and then doing places like Ruthies. I got into this, just because I loved fucking thrash, and I loved playing music, and the excitement of that.

“At no point did I ever think, ‘Oh my God, like, we're gonna be super famous playing this kind of music.’ It was so underground. Even when we did Burn My Eyes, I thought, 'We're never gonna get played on MTV, we're never going to get radio play, we're gonna have to earn our fanbase the hard way, one by one, working our asses off.' To me, nothing's changed about that.”

And as we said at the start, Robb Flynn is not unfamiliar with adversity. But it’s this energy and this experience and this feeling that nothing outside music can give that keeps him coming back swinging. And, you suspect, there’s something in the challenge, or the overcoming it, that he enjoys.

A couple of weeks before the release of the new album, Machine Head did a surprise set on the SOPHIE Stage at Bloodstock. It was their first show back since the pandemic. Guitarist Vogg wasn’t there, on tour with Decapitated. Even here, Robb runs headlong into the occasion (in such a hot tent this writer almost passes out near the end). Because it’s that simple thing that keeps him going.

“For me, music is about a connection,” he says. “It's about that fucking crazy, invisible energy that I grew up with, that people create when they're having fun. And that's the shit that I live for. I can even get that same energy from the happy hour. You know, it's real. It's there. You know, it's totally different. But it's there. And that's what this is about for me.”

He nods, sure of himself.

“That’s what keeps me fucking getting up there, man.”

ØF KINGDØM AND CRØWN is out now via Nuclear Blast. The band are on tour with Amon Amarth this week.