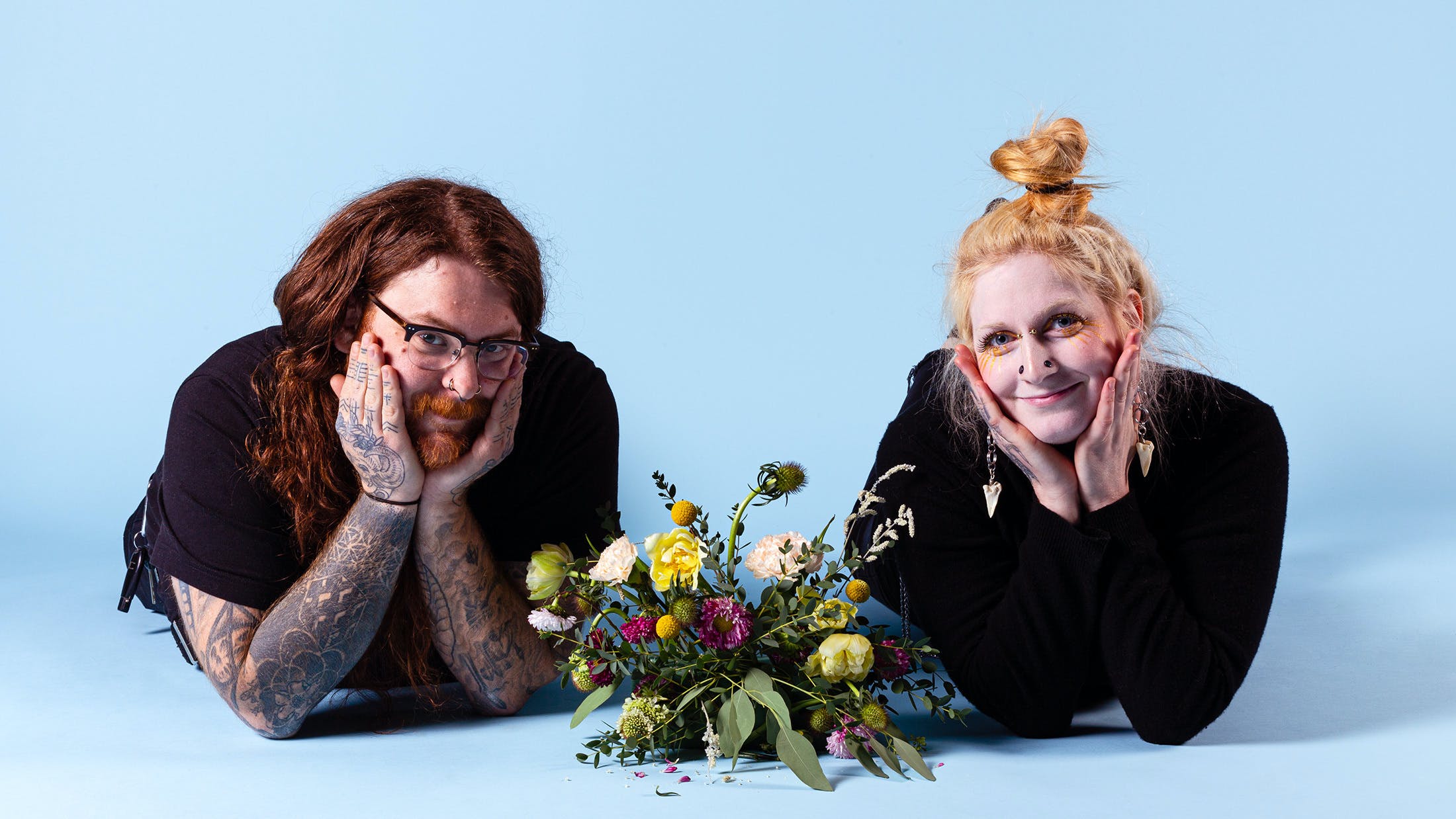 In a year that will go down in history as a dumpster fire of a horror show, a duality of mindset exists among the people – one that can be broken down into either apathy or rage. With our every waking thought being recorded on social media, addicted to the micro-dopamine hit of likes, but also doomscrolling long into the night, nuance is dead and opinion is binary. Yes or no, black or white, on or off. There is no maybe, there is no grey area, there are no half-measures.

“There’s a fine line between people screaming at each other because of what happened on the last season of a shitty reality show and people having a strong opinion politically,” muses KW, vocalist and guitarist for Canadian doom-mongers Vile Creature. “People need to understand that when it comes to, ‘Which band is your favourite? Which colour is your favourite? Who is the coolest celebrity?’ that none one of it matters and if you have a strong opinion then you need to calm down.

“When you’re talking politically, you have to have a strong opinion because inaction is complicity.”

Kerrang! is chatting to KW over Skype following the release of Vile Creature’s new album Glory, Glory! Apathy Took Helm! last month. And while the album title is tongue-in-cheek, it raises questions of internalised apathy, often born from a place of privilege and wilful ignorance.

KW explains it as a feeling of wanting to make the world a better place but not knowing how, so you just sit in front of Netflix and tell yourself you’ll do it tomorrow.

“It’s much easier to blend apathy into your life than to combat things and actively work on making things better – not only for yourself but for other people.”

He continues: “For me specifically, I’m referring to the ideals of moral nihilism and the idea of people saying, ‘The world’s nothing and we are nothing so we should just do nothing because nothing fucking matters.’ It’s lazy and stupid and prevalent in a high amount of metal bands. But it’s metal to care, it’s metal to try and change things. Do you think Black Sabbath wrote War Pigs to sit around not doing anything? You think Rob Halford was out and proud for no reason? No, they wanted to change things and make things better.”

Since their formation in 2014, Vile Creature have been actively spreading a positive message of change and equality through their punishing slabs of tar-thick riffage. KW (he/they) and his partner Vic (they/them) both identify as queer, and over the past three albums have been sharing their personal experiences at high volume and even higher intensity.

The project began when they began dating and KW taught Vic how to play the drums. Within three months they had released their first record and now, six years later, they have played hundreds of shows and become one of the most respected names in the underground, although they were initially seen as the black sheep of their local scene in Hamilton, Ontario – playing just eight shows in their local area ever.

“We were a two-piece who were outwardly talking about our personal experiences as queer persons and were very up-front about it. Near the end of the set we’d talk for a minute about who we are, what we stand for and what the songs were about. I don’t think that was a thing that was around in Southern Ontario.

“Our first two years of playing shows, all of our bills were a noise act, a queercore pop-punk band and then us because nobody knew who to put us with. I don’t think at that point there were many outwardly, specifically anti-oppressive doom bands, which has changed a lot in the past few years. It’s amazing to see so many outspoken bands continuing to pop up, even bands who are significantly older than us being more vocal about their political beliefs. It makes it a much more comfortable experience going out to play shows.”

Growing up in south Florida in the late ’90s/early ’00s, KW explains that the words ‘trans’ and ‘queer’ weren’t a part of the cultural lexicon.

“It was ‘Oh, you’re a f*ggot!’ Punch, punch, kick, hospital. That’s what growing up was like in a lot of circumstances and the band – for me lyrically and creatively – started as a means to put those feelings out there and release them.”

Despite heavy music’s supposed ideals of rebellion and independence, LGBTQIA+ is still viewed as a taboo subject by many of its followers – ironically going against the progressive attitudes on which this genre was founded.

“We were looking at Twitter this morning and a tweet said, ‘I was stoked to buy the album on both LP and CD and give this band a try, then they started with all this political crap so I spent my money elsewhere and I’m no longer interested in their creativity,’” smirks KW. “We’ve got a good amount of pissbaby clownshoe boys like that and we don’t give a fuck.

But could someone who doesn’t ascribe to Vile Creature’s progressive, liberal viewpoint still enjoy them?

“If we were just aiming it at queer people we’d just be preaching to the choir,” says KW knowingly. “If someone listened to our band and it opened them up to thought processes of dealing with their own internalised racism, misogyny or homophobia and come out the other side with a better understanding then that’s a wonderful thing.

“It’s important for bands like us to play in uncomfortable spaces and talk to people who have opposing views and force them to reckon with their own internal shit,” he adds. "I will always feel so safe and amazing playing for 500 beautiful, affirming voices of people who intrinsically agree with our politics, but we’re not changing anything by doing that.”

KW and Vic’s personal lives have fed directly into new album, Glory, Glory! Apathy Took Helm!. While their previous album – 2018’s Cast Of Static & Smoke – was a sci-fi odyssey released with a 16-page story, their latest full-length is rooted in reality; a reality dripping in bile and despair.

“Love songs are the biggest songs of all time – there’s a lot of positive art out there – but when it comes to us specifically, we utilise this band for letting out feelings in a healthy way,” says KW, extolling the virtues of catharsis. “No matter what we do or say, there’s always a twinge of positivity at the end of it, even because we’re not the type of people who sit down and take it.”

And for an album that opens on a banshee shriek of the words ‘We die!’, it does take you on an adventure out of the darkness and into the light. KW views it in a more cyclical nature, moving the needle from 0 to 360 degrees, forever experiencing the stages of grief – from denial to acceptance.

It’s the epic, choral finale that solidifies this journey through the rabbit hole and into sunlight. Written with Laurel Minnes from 12-piece choir Minuscule, who also appear, the 14-minute double header of closers Glory! Glory! and Apathy Took Helm! sets you on a path of enlightenment before hurling you back down to Earth with an unholy smite.

“It’s the thing I was meant to write after 20 years of writing music,” smiles KW, acknowledging that his life-long love of musical theatre instilled the idea of wanting to write a full choir-piece. But it’s not just an accomplishment of songwriting, as a whole it’s what sets Vile Creature apart in a scene that is awash with bands who simply worship the riff.

Of course, this pair have never been about doing things the normal way, it’s only about releasing the poison inside. But what about those listening to the new for the first time?

“I’m hoping that they feel okay, or more okay than when they went into the album,” says KW sincerely. “I hope they’re able to find comfortability in themselves and apply that to the world outside. Maybe this is the least metal thing to say, but I just want people to be okay. I want people to care about themselves and those around them. The most metal thing that you can do is care about other people and the community at large. I want people to feel empowered and have an emotional response; to feel confident to go about the world as the best version of themselves, as well as the best version that can help other people.

“And I hope they enjoyed it.”

Glory, Glory! Apathy Took Helm! is out now via Prosthetic.

Vile Creature: “The fight for equality in sexuality, gender, class and race is an everyday struggle”

Ontario post-doom duo Vile Creature on queerness, identity and how their experiences feed into their music.

Vile Creature are hosting a very special livestream tonight – and what happens is up to you!

Vile Creature Release New Song, You Who Has Never Slept