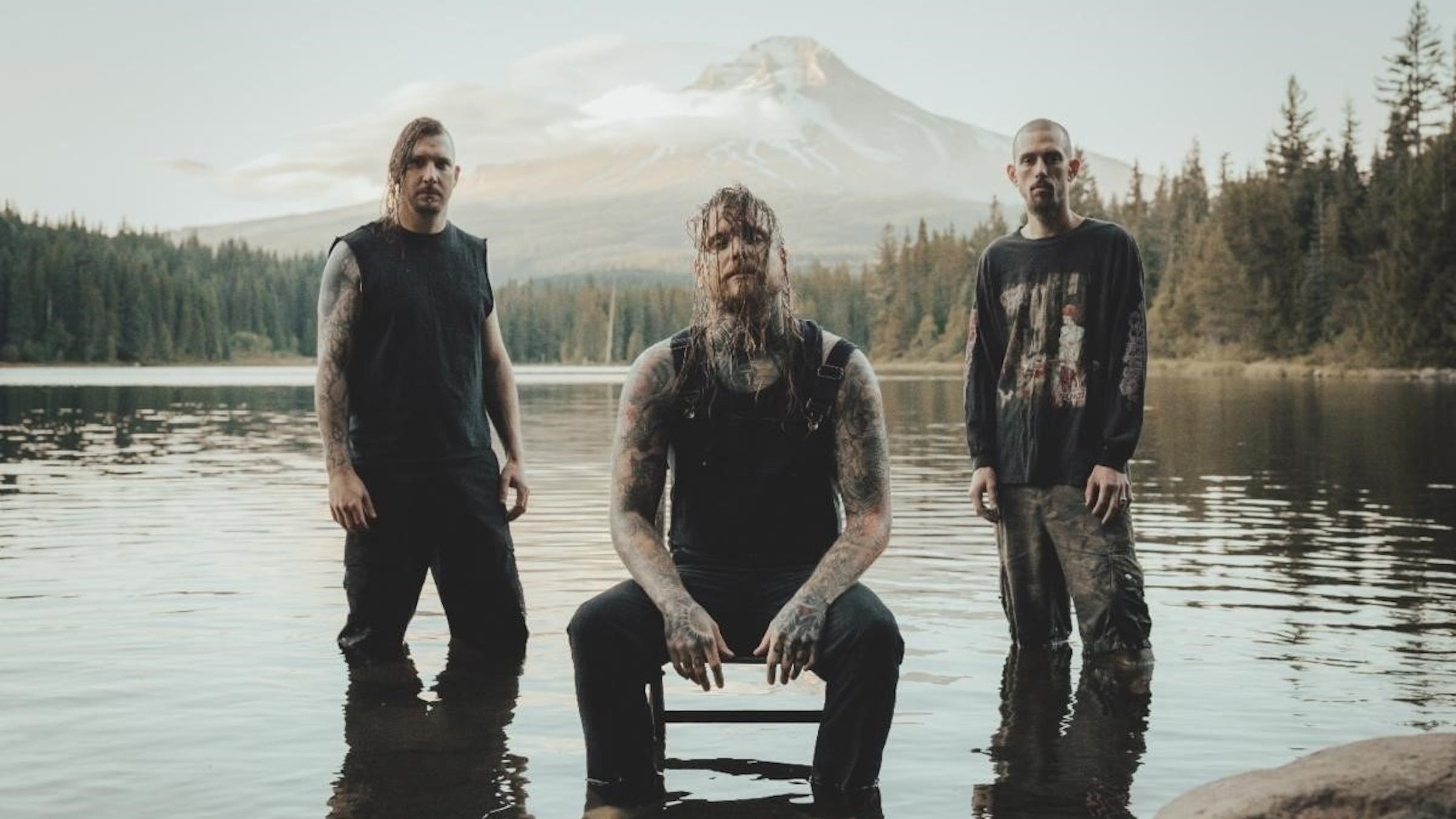 It's not that Vitriol don't love death metal, or death metal fans. Quite the opposite: the Portland trio are specifically interested in bringing a renewed sense of fury into the music they care about so dearly. On their debut LP To Bathe From The Throat Of Cowardice, the band have created a sound that is both technical and atmospheric, sonically ambitious while utterly stygian. For some modern tech-death fans, this approach might feel humorless -- but for many fans of the genre, the stone-faced odium on To Bathe... is a refreshing return to the genre's essence. This isn't metal for those looking to smoke weed and crack jokes about corpse paint, it's sonic relief for those nursing a serious misanthropy.

"It’s just a human experience, man," says Kyle Ramussen, the band's gravel-voiced frontman and guitarist. "That needs to be represented, too. Life is fucking hard. It’s fucking cruel. And some people don’t have the opportunity to see much more than that for long stretches of time in their life. And what do they get? What band is for fuckin’ them? Where’s the band for people that are fuckin’ pissed? They’re not just trying to crush a couple beers and chase a Suicide Girl through the woods for a fuckin’ music video. They’re trying to fuckin’ say something because people are depraved. It’s certainly not about negativity for some juvenile sake of ‘Oh, middle fingers to society, bro.' It’s a place of catharsis, and it’s a place of ultimately healing."

As we prepared our exclusive stream of the band's new video, I Drown Nightly, we spoke to Kyle about the philosophy at the core of his band.

Do you feel that Portland, or the Pacific Northwest in general, informs your music?

Kyle Rasmussen: No, only in so far everyone’s environment inevitably informs their art. But not insofar that the musical infrastructure of the Pacific Northwest. Like, I wouldn’t say that anything sonically that’s happening in the Pacific Northwest is doing much.I would say that the most powerful thing about that anecdote is the fact that it has allowed the three of us -- especially when creating music that is ambitious in nature -- to do that in a garage and not through email. It has created the ability to communicate in a way that I think a lot of more technically-ambitious players are alienating themselves from by being a little too self-sufficient. With Vitriol, I knew I didn’t want it to be a solo project with the guys filling the roles. I wanted it to be a fucking band, you know what I mean? So it was important that we all developed our voices in a way that leaned on each other. I think, at this point, looking back in retrospect, our biggest strength is the fact that we’ve been playing together since we were kids in a fucking garage.

That’s interesting -- plenty of technically-ambitious death metal bands prefer that ability to sit with a computer and match everything up just right. What is it about the human element that you feel like improves or adds something to your music?

I think it just offers a different experience. I think a lot of people have been presented ambitious music as just a vessel for athletic ambition, you know what I mean? A lot of people play to the limits of their ability, and they want to showcase that, how precise they can be, how clean they can be, and that’s what it’s about. But it’s not really about communicating an experience to the listener, and it’s certainly not about creating a harrowing musical experience for the listener. And that’s what death metal should be, fundamentally: it should be a negative experience.

I never really fell in love with technicality. [Death metal was] the opportunity to overwhelm the listener. The first two Origin albums are really good examples of a band that: in the early days, they found a way to not just dazzle you, but actually oppress you with how many notes are happening. It was about creating an abject experience. It’s hard to say if it’s better -- it’s just a different thing. We’re just trying to make death metal, and that’s why it’s always been important to us to not be, you know, marketed as a tech death band, because philosophically, it’s just not how we carry ourselves.

It sounds like you’re trying to find the middle ground between technical death metal and brutal, atmospheric death metal -- or, to use the strength of one in the ethos or atmosphere of the other.

I suppose it could be seen that way. For me, it was more of a meditation on...what would death metal look like if Muhammed [Suiçmez, mastermind of Necrophagist] hadn’t put out Epitaph or Onset [of Putrefaction]. I feel horrible saying that -- I can’t believe I gave that to you in a fuckin’ interview, because I love Muhammed. I love Necrophagist as much as the next kid that grew up loving death metal. But really, he was too good. He was too much of a visionary. He was too ahead of his time. And it derailed everyone. And that’s all everyone wanted to do for 15 fucking years — is be Muhammed.

So, all of that piss and vinegar and fire and aggression and hostility of the late ‘90s, of the Hate Eternals, the Krisiuns, the Niles, all of that just really percolating aggression...what was happening in Brazil at that time just seemed to fade away. It seemed to become unimportant, not necessarily the bands or the music, but just the goals of those bands. It’s like people forgot why those bands were making the music and why it resonated with them. So, for me, it was just like, I want to go back to that being the goal of death metal -- is crushing somebody. And that’s what some of those bands were trying to do. They’re not just happy to be coincidentally crushing you through their ambition; it’s a high curated experience.

That’s interesting in part because these days, plenty of people think of death metal as just a form of rock’n’roll. There’s the attitude that at the end of the day, death metal’s just meant to be a good time--

No, it’s not. I’m not that guy, that novelty, that cliché that the mainstream media clings to, of the bearded metalhead with the heart of gold. We ain’t your boys, dude. We ain’t your fuckin’ guys. You got the wrong fuckin’ guys, man. I’m not saying we’re fuckin’ pricks, I’m just saying that we’re in a position -- I feel like we’re in a unique position to speak about this kind of music in an honest way.

Does Virtriol get pushback about that in the metal scene?

Oh, yeah. It’s polarizing, man. In 2017, we had an EP cover out, and there were people that just knew what we were doing, you know what I mean? And when a band is so young, people don’t appreciate how amorphous a band sound’s is to an industry when they’re not established. We don’t have a mouthpiece of the rest of the world telling you what the band is supposed to be. How many amazing bands were just slept on for so long? When Vitriol’s EP came out, some people were just like, ‘Oh, it’s just another tech death band,’ and then there were people that were like, ‘No, no, no, no — this is a very different thing.’ Luckily for me, I don’t view it as a part of my responsibility to have that conversation with the listeners of Vitriol -- to reconcile or approach with them. They’re either just gonna get it or not, and that’s fine. Vitriol is something to be watched and to enjoy if they’re something for you to enjoy in it, but it’s certainly not for you, and it never will be.

Watch our exclusive premiere of Vitriol's I Drown Nightly video below:

Vitriol's debut full-length, To Bathe From The Throat Of Cowardice, comes out Friday, September 6, via Century Media, and is available for preorder.

Make sure to catch Vitriol live at one of the dates on their upcoming tour with Cattle Decapitation, Atheist, Full Of Hell, and more:

READ THIS: Aborted will make you believe in the power of death metal