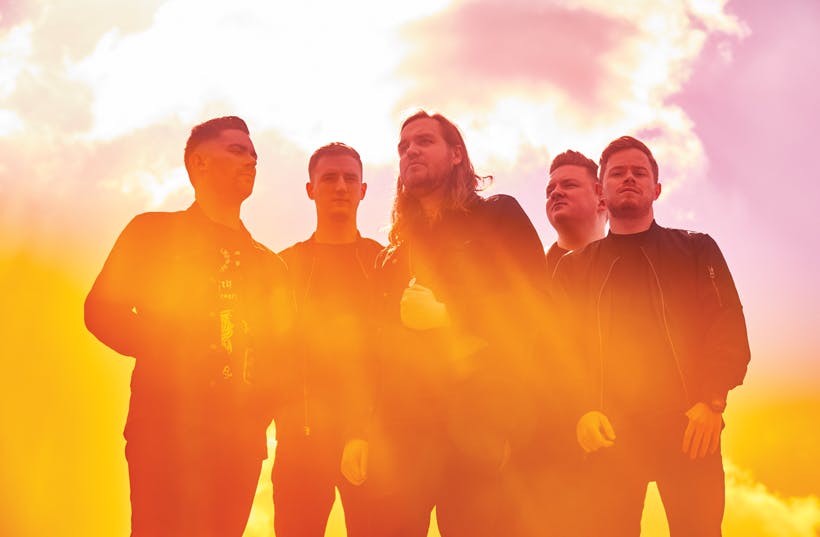 “You’re always going to have those fans who will live and die by your first record,” says Wage War frontman Briton Bond on the challenges of being a band trying to spread your wings and grow. “They’re resistant to change.”

Such is the lot of being a metal band who know they can be something more. Because, while the Florida quintet’s first album, 2015’s Blueprints, is a masterful work of metalcore muscle, it was on recent third album Pressure, released last August, where Briton and his bandmates really proved their might.

“We always want to show that we’re a metal band, but now there’s a mix between softer songs and songs full of breakdowns,” Briton says. “Our music is no longer the same kind of stuff – we want it to be more like something for everyone.”

It wasn’t just their music that grew – Briton himself had to grow as a musician in order to nail the album’s increased amount of clean singing, compared to the bellowing of old. “I even went to a vocal coach with Cody [Quistad, vocals/guitar] in order to get it right and help ensure that, as a band, we’re just doing us and not imitating anyone else,” he says of his dedication, adding that, “It all comes down to the fact that having 12 songs of menacing heaviness just doesn’t work for us anymore.”

When it comes to Briton’s desire for Wage War’s music to appeal to more than just metalcore fans, Pressure undoubtedly hits the mark. From the huge, arena-rock stylings of the melodic Grave to the thunderous growls of Who I Am, Pressure is an album that spans all facets of heaviness in the band’s own way.

“We’ve grown up and our tastes have changed,” Briton explains. “We’ve been wanting to write some pure rock songs for a while. We’re all big fans of that world, so we wanted to try it out and prove we could do it. What I feel we ended up with in Pressure was a record that, yes, is a metalcore album, but it isn’t your typical heavy LP. Introducing new sounds to the metalcore genre and focussing on writing great songs is our idea of having fun with music. We love the scene we’re a part of, but we want to be able to tour with more mainstream bands and be able to appeal to a less heavy crowd.”

Put it to Briton that it sounds like he’s positioning Wage War as a gateway band that could introduce newcomers to the more extreme acts in metalcore and heavy metal in general, and he’s in complete agreement. It turns out, in fact, that gaining such a status is part of the band’s grand plan in 2020.

“I’m absolutely on board with that idea,” he says. “We’re getting lots of new, younger fans coming out to our shows who perhaps wouldn’t initially mess with any really heavy bands, so I think it’s a good thing that bands like us are making the kind of music you hear on Pressure.”

By way of example, he points to the success of the similarly minded I Prevail as heaviness reaching fresh, unsuspecting ears.

“I live in Florida, and I recently saw a guy dressed all in camo, cigarette in his mouth, in a giant, jacked-up truck rocking out to I Prevail, which shows how metalcore is making its way into the ears of people who wouldn’t traditionally listen to that style of music,” he beams. “With Wage War, we wanna do something like that and to have an appeal that reaches beyond the confines of a scene.”

Wage War: How strength and unity shaped their greatest album yet

With the COVID pandemic derailing their momentum following third album Pressure, Wage War had no idea if they’d ever be a proper band again. Having channelled those frustrations into new record Manic, vocalists Briton Bond and Cody Quistad chart the rebirth of metalcore’s brightest hope…

Asking Alexandria have announced their first headline run in over two years: the Like A House On Fire World Tour.