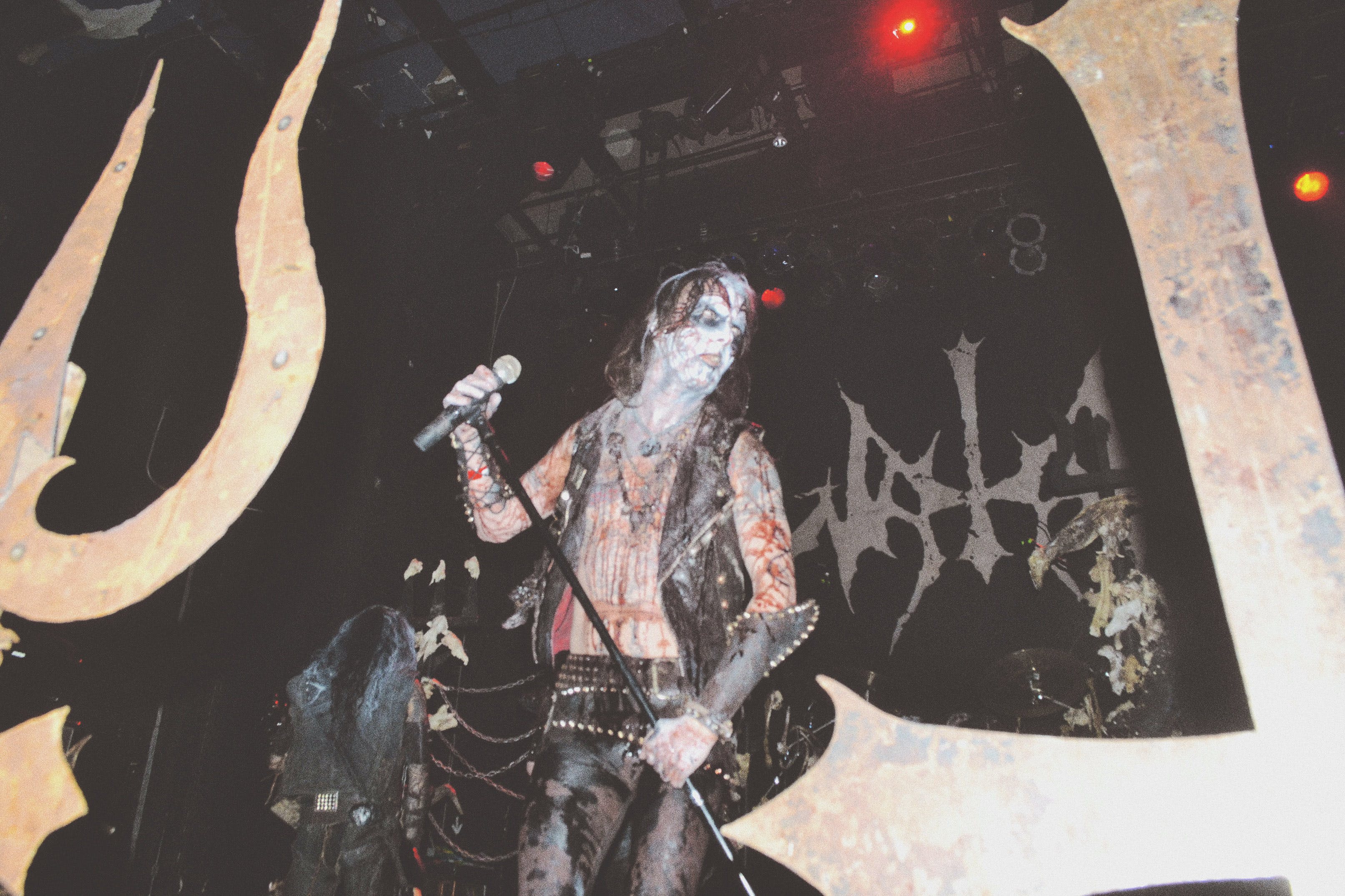 “WARNING: THE USE OF ANIMAL BLOOD & GRAPHIC CONTENT WILL BE USED DURING TONIGHT’S PERFORMANCE,” read the fliers posted on the front windows of Gramercy Theater in New York City. The warnings are obviously the venue covering its ass in preparation for tonight’s sold-out show featuring Swedish black metal tribesman Watain. During a 2014 Watain show in Brooklyn, fans were ceremoniously doused with animal blood, leaving some concert-goers, venue staff, and reporters horrified and disgusted.

Obviously, Gramercy wants everyone to know what they’re in for. Thing is, I bet every fan who bought a ticket tonight is ready. That’s what Watain is: the last black metal band to do shit like this.

“What people might not get is that we use blood for every Watain show,” says frontman Erik 'E' Danielsson when I interview him earlier in the afternoon. “We use guitars, we use drums, we use vocals, we use bass, we use blood. It’s an integral part of what we do. The Brooklyn show was nothing special—it was just another Watain show – but there were some reporters there who were really freaked out about it. Which is great. It serves our purpose.”

The blood may not be a surprise, but the “GRAPHIC CONTENT” might give some metalheads pause. During the week leading up to the show, a photo of touring guitarist Davide 'Set Teitan' Totaro throwing a Nazi salute had surfaced (he was booted from the tour shortly thereafter). That the band are co-headlining with Australian black thrashers Deströyer 666 – whose frontman K.K. Warslut has incurred rumours of racism due to bigoted remarks and questionable tattoos – suddenly gives the trek a menacing bent.

I wouldn’t exactly call Erik “menacing” as we chat in the back room of Gramercy’s basement. I’m never worried he’s going to shout “KRIEG!” and stab me in the face. He wears an earnest smile, groans about how wiped out he is at the end of the tour, and sings the praises of the crowds in Indianapolis and Greensboro, North Carolina. That said, he does the interview in full studded leather: vest, belts, boots, the works. He cites black metal as a sacred ethos Watain holds dear.

“I feel we have an obligation, as a prominent black metal band of today,” Erik says. “An obligation to uphold the ways of old. We are ambassadors of an old tradition that we don’t want to see becoming a pacifist one. We want black metal to be how it should be: dangerous to the point of being unacceptable.”

I wouldn’t want to test his dedication to this belief, either. He seems genuinely ready and willing to trade blows with the band’s detractors.

“[A Watain concert] rarely comes to face-to-face protests… unfortunately,” Erik laments. “I’d love that. I don’t want people speaking from behind their computers. If you have a problem, come up to us as at a show. I’d like to fight. Any fucking day.”

It sounds simplistic and barbaric… but cool. True, I think, as I leave the interview to get ready for the show. Metal’s darkness only seems ridiculous if the person touting it is actually just some suburban dad hungry for attention. But this is what Watain is: aggressive, dark, ritualistic, wearing black leather to bed. Erik may just be talking smack, but there’s no costume to take off.

Turnout is solid, but the fans who show up don’t share Erik’s depth of introspection. Everyone looks fucking pissed, even when they’re smiling. The girls look more pissed and judgmental than the dudes, popping hips and scowling at passersby.

Unlike your average New York black metal show, there’s no gothic lace or ironic pink shirts featuring “DEATH METAL” over a rainbow – it’s just black gear with stark white logos. There’s a gang vibe to the whole thing, with many fans showing up dressed in All Watain Everything. Some dudes even keep their sweatshirt hoods up throughout the entire night just to keep showing off the Wolf’s Head logos emblazoned on the side. It certainly doesn’t convince me that the bands playing tonight have nothing to do with Naziism.

The pit area is already packed by the time Pennsylvania trio T.O.M.B. (Total Occult Mechanical Blasphemy, obviously) hit the stage. Their bare-bones atmospheric industrial lumbers at a steady mid-pace, and the band are believably weird: gimp mask-clad frontman No-One spends the set banging on what appears to be a bedpan attached to a section of a wrought-iron gate. There’s no pyro or gore, just, CLANG, UHHHHRRRR. The crowd seems interested in the total lack of subtext, though some of the less entrenched fans look pretty ambivalent. As one bartender tells me, “It looks like the lead singer is ironing his shirt onstage.”

Sandwiched between reverb-heavy cave metal and ritualistic Swedish blood worship, Deströyer 666 just seems like Motörhead (who they cover, playing Iron Fist midway through their set). For all their gauntlets and spikes, the band look comparatively blue collar, and Warslut’s questionably Arayan runic tattoos look down on the photo pit from the underside a dad bod biker belly. Unlike at past New York shows, Warslut keeps his stage banter to a minimum; if the controversy surrounding the band has had any positive effect, it’s that they keep the set tight and don’t use the time between songs to goad the crowd.

As Watain’s set approaches, everyone gets fucking wasted. Besides the usual tall boys and whiskey shots, the night’s cocktail specials are being pounded fervently, with Watain-inspired names like “Sworn To The Dark” and “Satan’s Hunger” hiding that they’re just well liquor and juice. The smoking section becomes packed and needs to be extended, but the smell of weed is rare. No-one is here to broaden their consciousness; it’s all about getting fucked up and embracing death.

So it’s especially odd when, after Watain’s first song, Erik screams, “We are Watain, and we are here to expand your minds!” Nothing else about this show suggests that goal. Watain’s set-up is black metal defined: giant iron pitchforks, flickering torches, chains and animal bones. The band members look like thrasher scarecrows, drenched from head to foot in greasepaint, blood, and what appears to be ash. The old “No Mosh, No Core” credo apparently doesn’t apply tonight, as the crowd goes violently apeshit.

And Watain stink, literally. After only a few seconds in the photo pit I’m gagging from the stench of rotting meat coming off of their stage gear. While the band don't toss buckets of blood into the crowd, they do whip their fore-covered hair like no tomorrow, and everyone in the first three rows gets striped with carnage. The photo pit is surprisingly empty for this kind of show, and while that might be due to the week’s Nazis controversy, I wouldn’t be surprised if the slaughterhouse treatment has put plenty of photographers off.

But while Watain start strong, the band’s energy drops steadily (to be fair, it is the last night of a 30-date tour). Erik and co. eventually just stand near the front of the stage and chug out one traditional black metal track after another, with only Outlaw to shake up the pace. After an elaborate hoisting of the band’s pitchfork standard by Erik during an extensive outro, the lights come up. No encore.

The drunken crowd shuffles out, having gotten what they wanted but also surprised there wasn’t a little more. Maybe, I think, that’s a problem for bands like Watain. A few unorthodox tracks like Stellarvore or They Rode On might have made the show more interesting. Then again, maybe if they’d taken that approach, I’d complain that they didn’t go hard enough. Maybe this was what everyone wants from Watain: the Devil they know.

In that respect, Watain continue to uphold their end of the bargain. By drawing that line in the dust, the band define themselves powerfully as what they are, even if that comes at the price of never being anything more. There is simply questionable politics, cracked leather, scowls of contempt, blood, fire, death – the backbones of black metal.