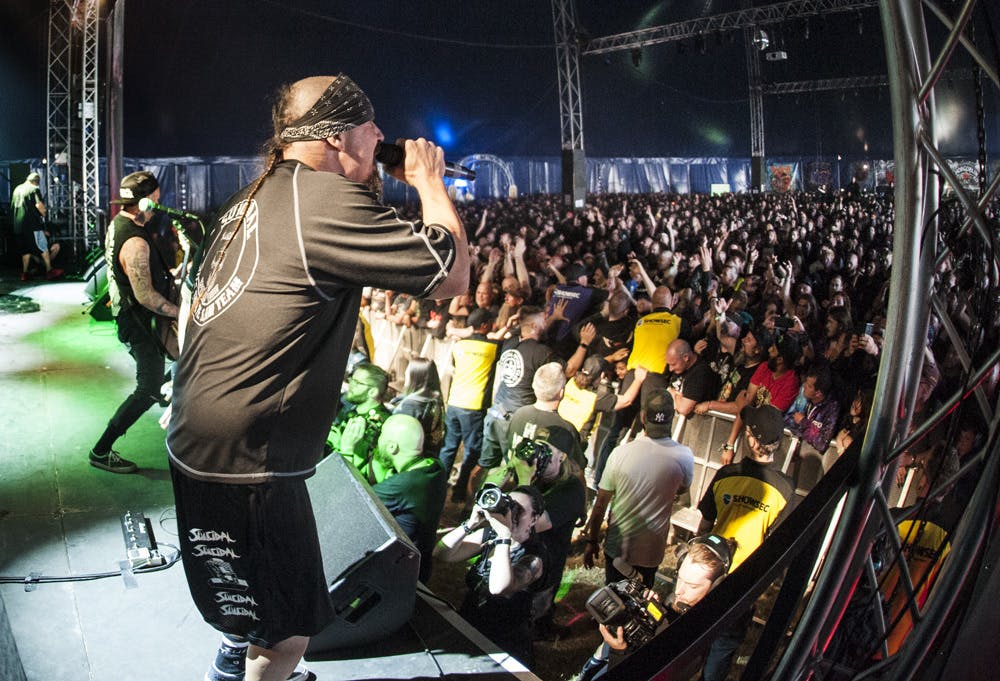 We all know that Rob Trujillo is a bit of a beast on the bass (why do you think he got the Metallica gig?), but did you know that his teenage son is just as sick at the four-string? Rob's 15-year-old son Tye Trujillo recently filled in on bass for Rob's old band Suicidal Tendencies at a show in San Pedro, California last weekend, and he kills it!

Don't believe us? You can watch the footage for yourself below. And look out for Tye getting knocked on his ass at the beginning... oops.

Posting on the Suicidal Tendencies Facebook page, the band say: "Wow... It's been 30 years since Robert Trujillo joined ST and did his firST shows with the band in Europe on tour with Anthrax.

"That firST show Robert came out like a beaST, going wild on ST all while slapping and bashing his bass with precision and a purpose. After the show, they were all 'Where did you find this guy?'.

"An amazing bass player, incredible person, and of course also co-founder of Infectious Grooves, that was the STart of a lot of great shows, moments, memories and helping take ST to another level!

"Flash forward to laST Saturday night in San Pedro at the SoCal Hoedown. HiSTory repeats itself as a young Trujillo STeps on STage and bashed around it like a true Cyco!"

"Huge thanks to Tye Trujillo for filling in for Ra for this one show. For showing what a bad ass he already is on bass, and at juST 15 years old, has already accomplished a lot, but huge things are STill coming his way. His youthful enthusiasm was contagious, his bass skills undeniable."

The post goes on to thank Rob and his wife Chloe, and explaining just how proud they are of Tye.

But it can't go unmentioned that Tye took a tumble live onstage.

"Well as we always say, you get knocked down in life, you get back up... And not only did Tye get back up... But with a smile and didn't miss a beat or a STep! There's a lesson there... Be like Tye!"

This isn't the first time Tye has performed with an iconic metal band. Two years ago – when he was just twelve-years-old – he performed live with Korn in the UK!

Next stop Metallica, then?

Suicidal Tendencies state that "this isn't the first time we’ve been flagged" – but that "hopefully it will be the last".

As Fieldy "takes some time to heal", Korn have announced that Suicidal Tendencies' Ra Diaz will be filling in on bass duties live this summer.

Members of Anthrax, Run-DMC, Volbeat and Suicidal Tendencies have teamed up for a charity medley.

12 Of The Best Dads In Heavy Metal

This Father's Day, we honour 12 of metal's greatest patriarchs.

11 reasons why ’90s movies had the best soundtracks

We explore the golden age of movie soundtracks throughout the 1990s