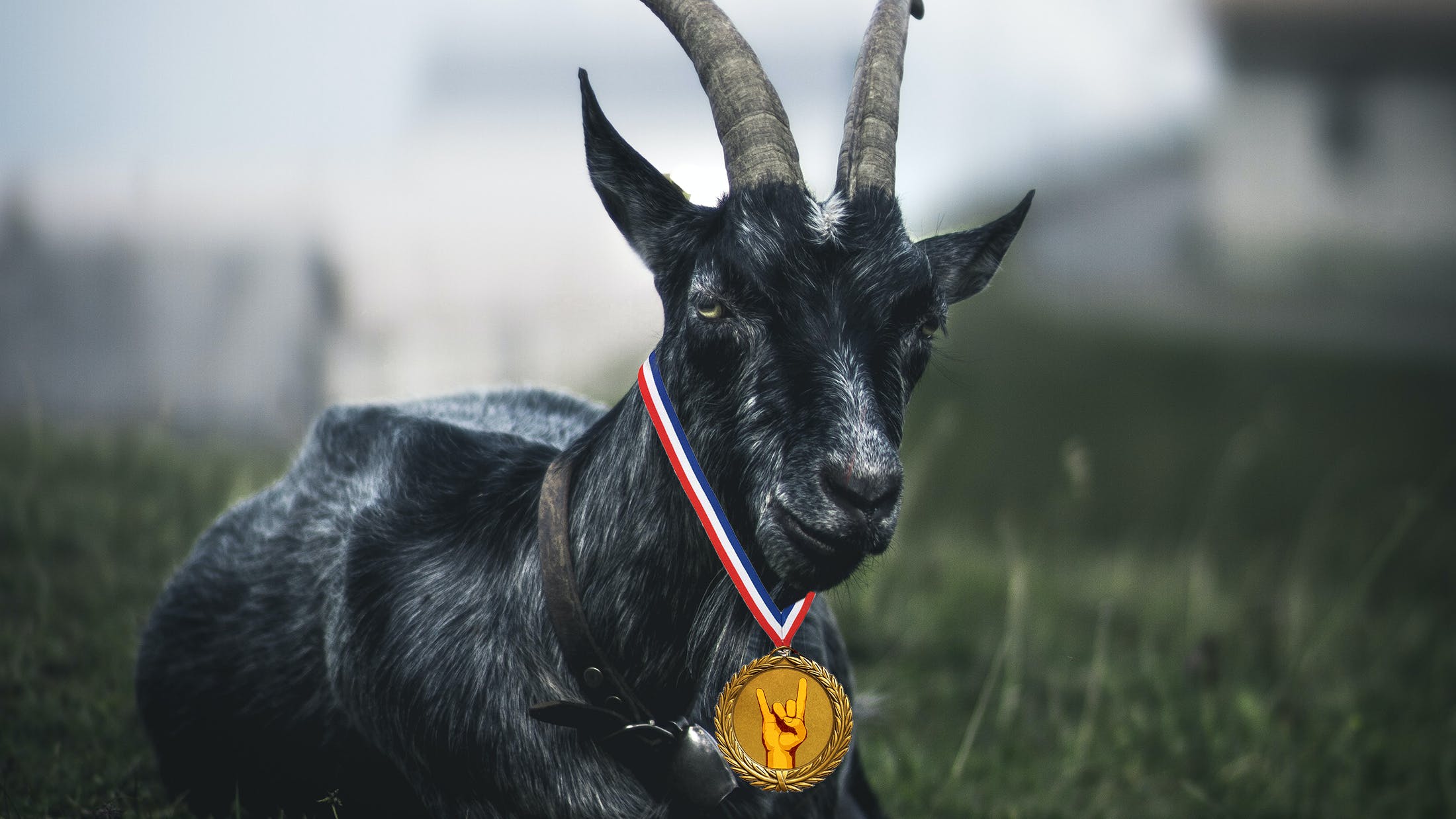 What is the most metal animal? That's the sort of shit that keeps us up at night, you know…

Because the kingdom of beasts is a mighty one. Feathers! Fangs! Claws! Devourings! Carcasses and carrion and shit like that! But which animal is the most metal of all? The only way to possibly find out would be to scribble sixteen arbitarily-chosen creatures that could plausibly be judged as metal onto some bits of paper, pick them at random from a hat and pit them against one another in a knockout tournament to the loud, hairy death.

SNAKE VS EAGLE
Two eagle-related rock bands that aren’t metal: Eagles and Eagles Of Death Metal. That said, eagles have some metal traits, certainly – talons are pretty metal, and carnivorous birds in general have a lot of brutal elements to their lifestyle (picking flesh from bone and so on). If you expand “eagle” to cover all birds of prey you get to bring in some rad vulture-related material – Baroness’ album A Horse Called Golgotha (which will probably also come up in horses’ first-round match) sports a lovely one on the front, for instance. As for snakes, there’s Slash’s Snakepit, Turbonegro’s Ass Cobra, Limp Bizkit’s Gold Cobra, Goatsnake, Whitesnake, the curled-up little beast on Metallica’s Black Album and, if we’re feeling a bit generous, Venom.
WINNER: SNAKE

RAT VS GOAT
Hair metal pioneers Ratt and punk legend Rat Scabies notwithstanding, rats aren’t as high-profile in the metal world as you’d expect given how many of the plague-infested things there are. King Gizzard And The Lizard Wizard threw them a bone this year with their album Into The Rats’ Nest, but come on, they’re up against goats. Between Venom’s logo, the cover of Slipknot’s Iowa and bands with names like Goatwhore, Acid Goat, Armored Goat, Goat Anus, Goat Funeral and the delightful fact that there are at least three different bands called Goat Perversion, plus the whole Satan connection, goats storm through to round two.
WINNER: GOAT

CROW, RAVEN, BLACKBIRD ETC VS BEAR
There’s a bit of a thing going on with crows and the like where, while they work well as symbols of foreboding or death or whatever, they’re ultimately birds and not that threatening – the reality is vastly less dramatic than the symbolic value. They got into an Incubus album title, which is something? Bears are the opposite – they’re always represented as cuddly, honey-loving cheeky chappies while in reality they’d quite happily survive on a diet that solely consisted of human guts. Plus, Beartooth, Minus The Bear, Iwrestledabearonce, Polar Bear Club, Cancer Bats’ album Bears, Mayors, Scraps and Bones, the Folie A Deux cover… Also, bears, you know? They’re ace.
WINNER: BEAR

SPIDER VS COW
The lead singer of Powerman 5000, Spider, would see no contest here. Arachnid-obsessed nu-metallers Cold would agree, as would the NWOBHM band Spider. At first it really seems like spiders just have it down – look at their webs’ contribution to elbow tattoos and their omnipresence in the cartoonier side of goth imagery. Cows are just big milk machines, right? But then… Cattle Decapitation. Aerosmith’s udder-fronted Get A Grip album. Rage Against The Machine’s Bulls On Parade. And the best/worst album cover of all time, Torment’s Bestial Sex. Spiders suddenly have little to offer beside fancy dress accessories and the Spider-Man (2002) soundtrack featuring Chad Kroeger and Josey Scott of Saliva.
WINNER: COW

DOG VS BAT
Poor dogs – despite fine efforts like the late Chris Cornell’s supergroup Temple Of The Dog and the beautiful woodcut hound on the front of Neurosis’ album Times Of Grace, they’re up against bats. Bats are metal as fuuuuuck. They’re nocturnal, they look like the devil and Ozzy Osbourne bit the head off one. Plus the following things exist: Cancer Bats (and their glorious all-covers side project Bat Sabbath), Meat Loaf’s gazillion-selling Bat Out Of Hell, goofy kid-ska project Aquabats (which doesn’t count, probably, but is fun) and Metallica’s Battery (which absolutely doesn’t count, but if the cat version of a kennel is called a cattery…).
WINNER: BAT

ELEPHANT VS PANTHER
How strict do we want to be here? There’s Cage The Elephant, of course, but Black Tusk, Mammoth Wizard Weed Bastard and motherfucking Mastodon are all elephant-adjacent. However: Pantera. And, if in any doubt, the ultimate tiebreaker question is “which is most likely to be spraypainted on the side of a van?”, and elephants are really hard to draw.
WINNER: PANTHER

SHARK VS HORSE
Two icons face off. They’re both animals associated with jumping. They’re both, thanks to the My Own Summer video and White Pony album, also associated with Deftones. It’s a tricky one – there’s Horse The Band, but also Great White. There’s Gallows’ In The Belly Of A Shark, Baroness’s A Horse Called Golgotha, the fictional but excellent Wyld Stallyns, and, probably the best stock-photo album cover ever, Faith No More’s The Very Best Definitive Ultimate Greatest Hits Collection. Also, about one in six metal bands has briefly considered the name Hammerhead.
WINNER: SHARK

WOLF VS WHALE
Look, it’s wolves, isn’t it? They’re night-dwelling, flesh-tearing, moon-worshipping, beautiful-looking hairy bastards, and between Wolves In The Throne Room, Wolf Eyes, Wolfmother, Steppenwolf, Biffy Clyro’s The Wolves Of Winter, Guitar Wolf, Powerwolf and Gallows’ Orchestra Of Wolves, it’s a walloping really. There’s the terrifying artwork for Blood of Kingu’s Sun in the House of the Scorpion, versus the really pleasant artwork for Gojira’s From Mars To Sirius. Mastodon did a fucking fantastic album about a whale, Leviathan, but they also managed a song about a wolf, The Wolf Is Loose, cleverly covering all the bases for this round. Smooth move, Mastodon.
WINNER: WOLF

SNAKE VS GOAT
Snakes are pretty metal. In the Bible, that’s the original form the Devil takes when tempting humanity to sin. But, in more modern times, there he is in goat form on the none-more-iconic artwork for Reign In Blood by Slayer. Tiebreaker: Dimmu Borgir, who really, really like goats. They think goats are just brilliant!
WINNER: GOAT

BEAR VS COW
Cows should be pretty stoked they made it this far, shouldn’t they? Bears out-steel them, clearly.
WINNER: BEAR

SHARK VS WOLF Shark vs wolf should probably have been the final – it’s like in sports and stuff (“sports and stuff”) when things don’t quite go to plan and the two favourite teams end up meeting too soon. Ultimately, though, metal is primarily a land-based genre, and sharks don’t make any noises – it’s got to go to the one that can roar, really.
WINNER: WOLF

GOAT VS BEAR
Let’s turn to the Encyclopaedia Metallum for this one: there are 179 bands on it with “Goat” in their name and 22 with “Bear” in. One of those is called Alcoholic Russian Bear, which is a lot of fun, so fair play to them. But ultimately, bears are a bit too universally appealing to win this round – goats are a bit more of a deep-cut animalwise, a slightly more niche choice, the livestock of connoisseurs. You have to put a bit of effort in to properly appreciate a goat, you know?
WINNER: GOAT

BAT VS WOLF
Crikey. A clash of the titans. Two night-time lurkers, red-eyed hellish beasies that might change you into a monster if they bite you, and also might have rabies. Looking at those monsters, though, there’s a difference – a werewolf seems initially like it’s going to be kind of rad, but it’s basically one thing or the other; a dude or a dog. A vampire, though? Vampires are always dangerous, combine brute force with a keen intellect, and are sexy. Sorry, wolves!
WINNER: BAT

GOAT VS BAT
In an ideal world this would be a draw – smash a bat and a goat together and add human breasts and you have Baphomet, the most metal of all deities. A draw would be a massive cop-out, of course, so we need a winner. As luck would have it, one of these creatures possesses a beard. Congratulations, goats, you’re the most metal animal in the world!
WINNER: GOAT

(We did forget to include pigs though. Sorry, Pig Destroyer. Sorry, War Pigs. Also dinosaurs, dragons and cockroaches. Quite a few, in fact. It could all have been very different.)