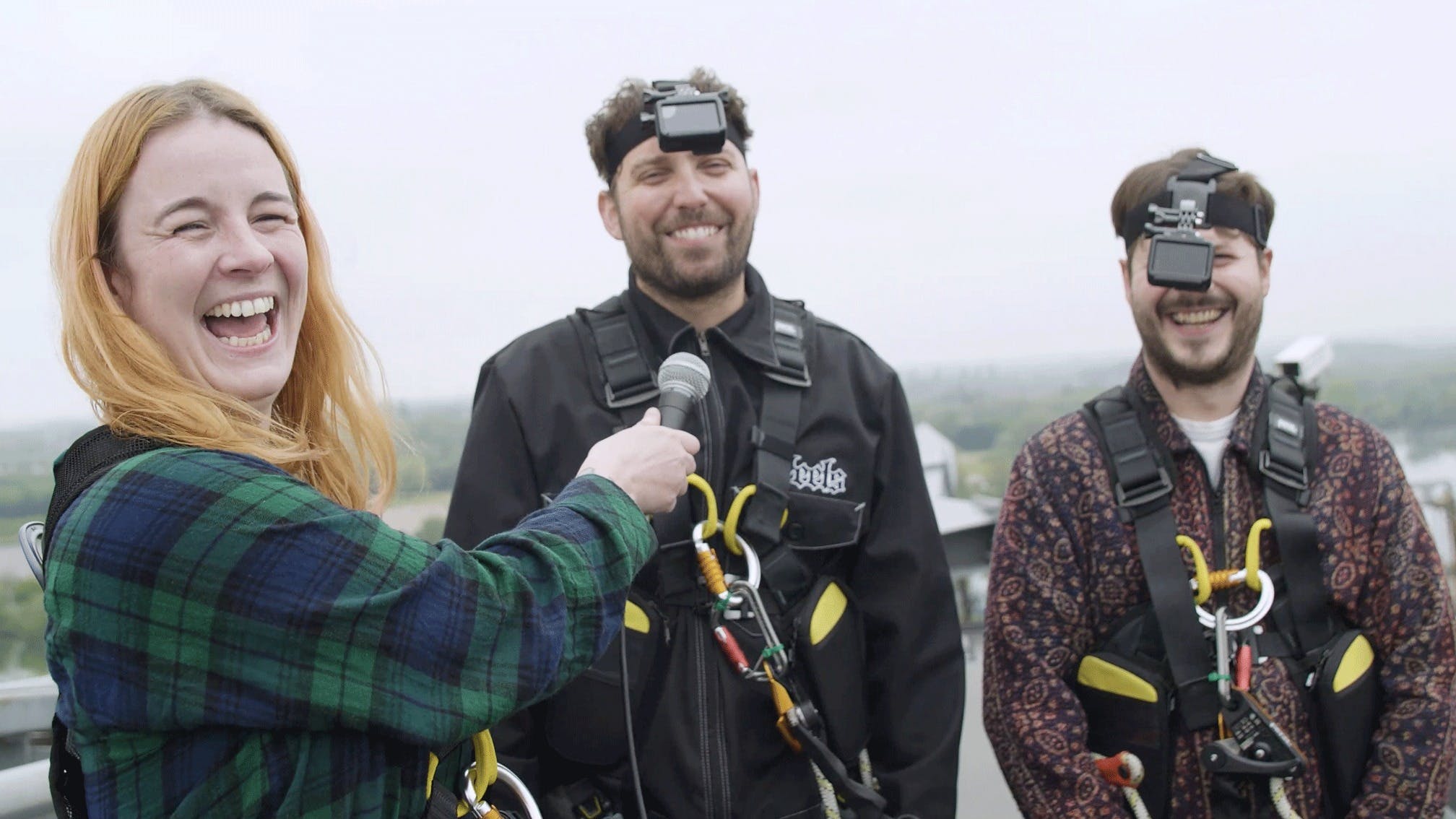 As far as interviews go, chatting 30 metres in the air atop The Swarm at Thorpe Park is far from what most people would call their comfort zone.

"...But you're at your most potent when you're out of your comfort zone," reflects Josh Franceschi, after admitting that he's scared of heights.

"It's a unique experience," adds Max Heyler. "I can roughly see where my road is from here!"

This is no ordinary interview, nor is it an ordinary occasion. You Me At Six's singer and guitarist respectively are here to commemorate the 10th anniversary of The Swarm rollercoaster, a ride for which they wrote the apocalyptic soundtrack.

"We were the first band in the world to write a track especially for a theme park" Max notes. The song, also entitled The Swarm, is an anthem about the end of the world which blares out in the extensively-themed dystopian area of the park. Max gestures out towards the thematic debris below us – an upturned ambulance, plane wreckage and smashed church surround the coaster.

"As you can see, it really does look like the end of the world!"

To honour the anniversary of this unique project, the band spent the day riding The Swarm and invited fans to join them.

"It's something we'll hold onto for the rest of our lives" declares Max. "I'm glad we're Yes Men" adds Josh. "Creating a song for a ride is the sort of opportunity where you'd be annoyed if you didn't do it."

The Swarm is the first and only Wing Coaster in the UK, placing riders in a precarious position dangling from the side of the track. This daunting position creates the feeling of flight, the ride is designed to simulate the sensation of being scooped up by a swarm of flying aliens. Racing across 2,543 feet of track at a top speed of 59mph, riders are flipped upside-down five times over heavily-themed scenes of alien wreckage.

Of course, The Swarm isn't the only thing celebrating a 10 year anniversary right now. Sinners Never Sleep, the acclaimed third album by the Surrey rockers has also turned a decade old.

"Ten years after we put the record out, we're still in the conversation – and for us that's the real sense of achievement" Josh remarks. "You don't want to be looking backwards too much, but you've got to celebrate the albums that have changed your life and shaped you as a human being."

"We're looking forward to playing what I think is a fan-favourite album for YMAS fans," enthuses Max. "These songs are still giving people joy 10 years on. To watch that as an artist looking out to an audience, I can't wait to see how they're going to react to it!"

"Sinners… is such a mixed bag of a record," describes Josh. "It's not just pop-rock, it's not just emo, it's testament to our songs and the relationships our fans form with them."

Max notes that at the time of creating Sinners…, "A lot of people wrote our band off." Josh nods in agreement: "Everyone dismissed the band. By the time we were recording Sinners… we were in a sheer state of bemusement that we were still doing it!"

But now at Thorpe Park the band stand tall, quite literally above all else, gazing proudly towards their Surrey homeland.

"We're all still together, healthy and enjoying making music" beams Josh. "Our key mantra as a band was always longevity, so you've got to celebrate these things."

You Me At Six play Leeds Temple Newsam on June 1 and Hatfield Park on June 2.