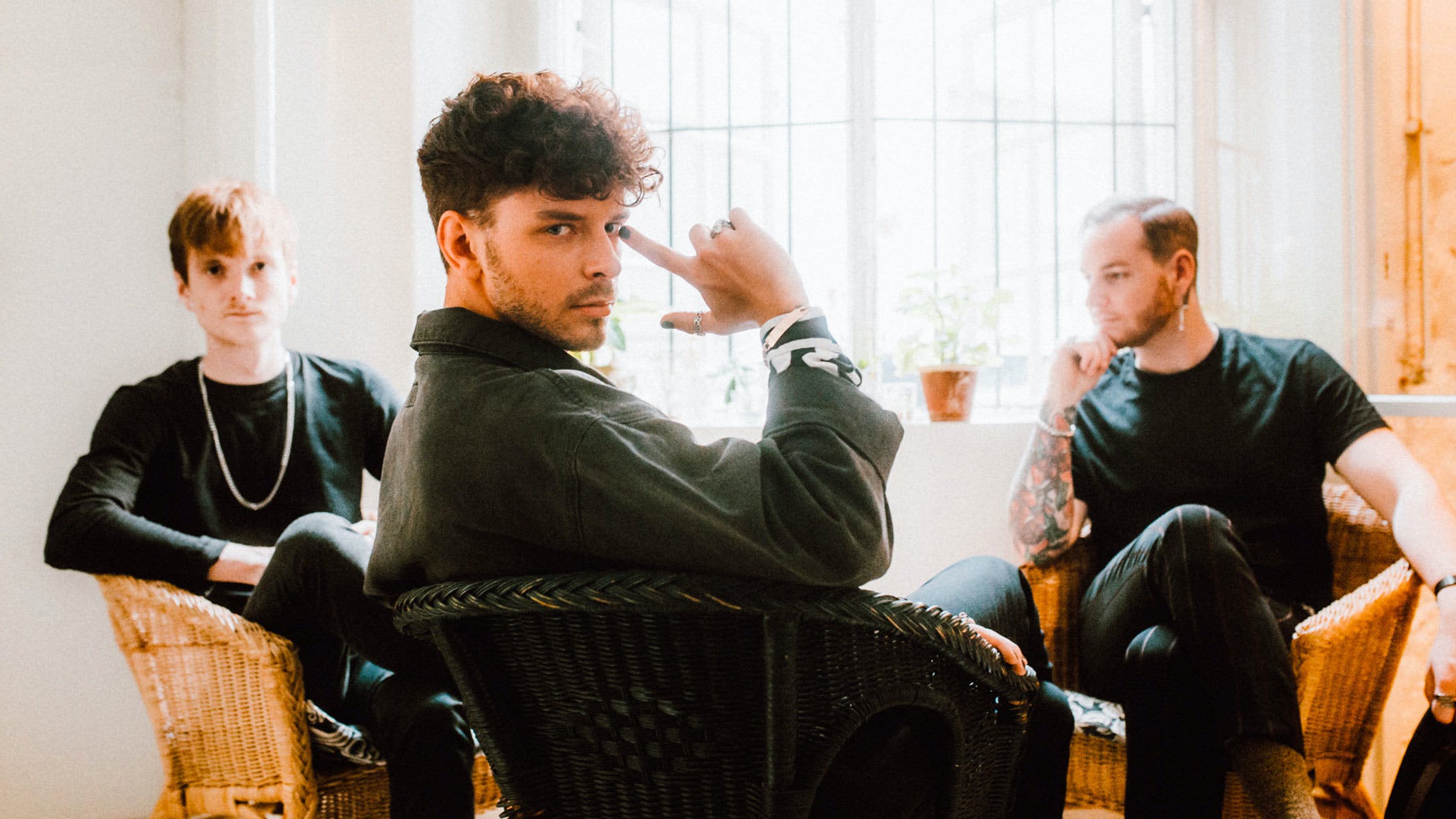 Growing up in a church blighted Philip Strand’s childhood. Immersed in an environment which, throughout our conversation, he repeatedly refers to as “toxic,” the Normandie vocalist believes that the struggles he encountered later in life had their roots in the trauma he felt as a youngster.

“I didn’t fit in there, and I was better off without it,” Philip reflects with a hint of animosity. “The closer you are to a deity, the more aware you need to be of the people leading those religious groups and societies. My view of religion was ruined by those experiences, and it took me five years after turning my back on the church to comes to terms with everything that happened and what I was feeling.”

Philip’s present circumstances are a far cry from the past life of which he speaks. The frontman of Swedish rock trio Normandie – a group he plays in with guitarist Håkan Almbladh and drummer Anton Franzon – he has found success both in a band and as a respected songwriter and producer, and is one of the writers behind Ireland’s entry for this year’s Eurovision song contest. Normandie, meanwhile, experienced moderate breakout success with their 2018 LP White Flag, the title-track of which has racked up over nine million streams on Spotify.

Determined not to rest on their laurels, Philip and his bandmates began work on the follow-up to White Flag before that album was even released. The result is Dark & Beautiful Secrets, Normandie’s third full-length, and a record that finds Philip addressing a lifetime of repressed emotional torment.

“When I was working on [Dark & Beautiful Secrets’ first single] Jericho, I decided to change a few words in the lyrics, and suddenly the song really began to feel like [it] was talking about what I went through as a teenager,” Philip explains. “I’ve never been a big lyrics guy, but doing that struck something inside me. I’d never written like that before – so raw and honest. For the first time, I began to feel like my story was something I needed to tell.”

Attempting to come to terms with all that he witnessed during a childhood spent in a strict religious community, the frontman was empowered by conversations he had with friends from the same church who came out to him as gay. There was power, honesty and emotion to their stories, and it lit a fire inside him.

“They turned to me as someone who they felt would understand them, because I knew their history,” Philip recalls. “We’d been through similar childhoods, and trying to keep the secret of who you really are and who you like while you’re in the church is incredibly hard. To me, it’s the most dark and beautiful secret you can carry.

“What really struck me about those who came out to me was the fact that they were still religious, despite the people around them and even themselves struggling to accept their choice,” he continues. “That’s an awful, insane burden. Hearing those kinds of stories really helped me when it came to making Dark & Beautiful Secrets, because if they could be honest to me about that, why couldn’t I be honest about my experiences?”

Mining his memories of the church for inspiration, the frontman began to reflect on the detrimental effects of his unorthodox upbringing, and how that experience led to darkness enveloping his teenage years through to his twenties. One such track, Chemicals, speaks to Philip’s attempts to fill the void that religion left when he turned his back on the church.

“I came to rely on substances and human connection instead,” he says. “I threw myself into things that were the antithesis to religion, which was really bad for me. I lived through some dark years as a teenager, and then I went through a real identity crisis, because all of a sudden I was an adult, but I was still finding myself. I didn’t know who the fuck I was – everything about my life up to that point was built on sand, and now it was in ruins. That led to a spiral of anxiety, depression and depersonalisation. I was apathetic towards everything.

“Thankfully, I pulled myself out of the mire thanks to some friends, but if it wasn’t for what I’d been through with the church, I don’t think I’d have ended up that way – it really fucked up my childhood.”

Now, armed with a new lust for life, Philip is determined to use the darkness of the past to inspire a brighter future for both himself and his band. His relationship with religion has been repaired – “I believe there’s something bigger than us – that’s how I find comfort,” he offers – and as for Normandie, the three-piece are enthused by what they feel is their most ambitious album yet. Dark & Beautiful Secrets may be propelled by some bleak storytelling, but sonically, it’s a vibrant rock record, and one that utilises Philip’s years of experience writing for artists of all genres.

When it comes to his ambitions for what Normandie’s latest album could achieve for the trio, Philip is intent on making sure as many people as possible hear the new music, and particularly keen on turning the band’s impressive streaming figures into larger live crowds, COVID-permitting. More than anything, though, he hopes the record can provide solace to those who connect with its story.

“It’s been a new experience for me to write something so personal and know that it might really connect with others,” Philip concludes. “Dark & Beautiful Secrets wasn’t supposed to be an inspiration piece – it was just me telling my story – but people are telling us they’re seeing themselves in these songs. I want those who relate to this record to feel like they’re able to seek comfort from friends, family or professionals, and open up about the issues they’ve been through and the thoughts they’ve had – no matter how dark. I take great inspiration from people finding that strength and acceptance within themselves. This album speaks to the fact that we need to be accepting of other people’s secrets, and willing to share our own. Now, more than ever, we need that connection.”

Watch the video for Normandie's new single Babylon, a song about searching for – and ultimately finding – your identity.