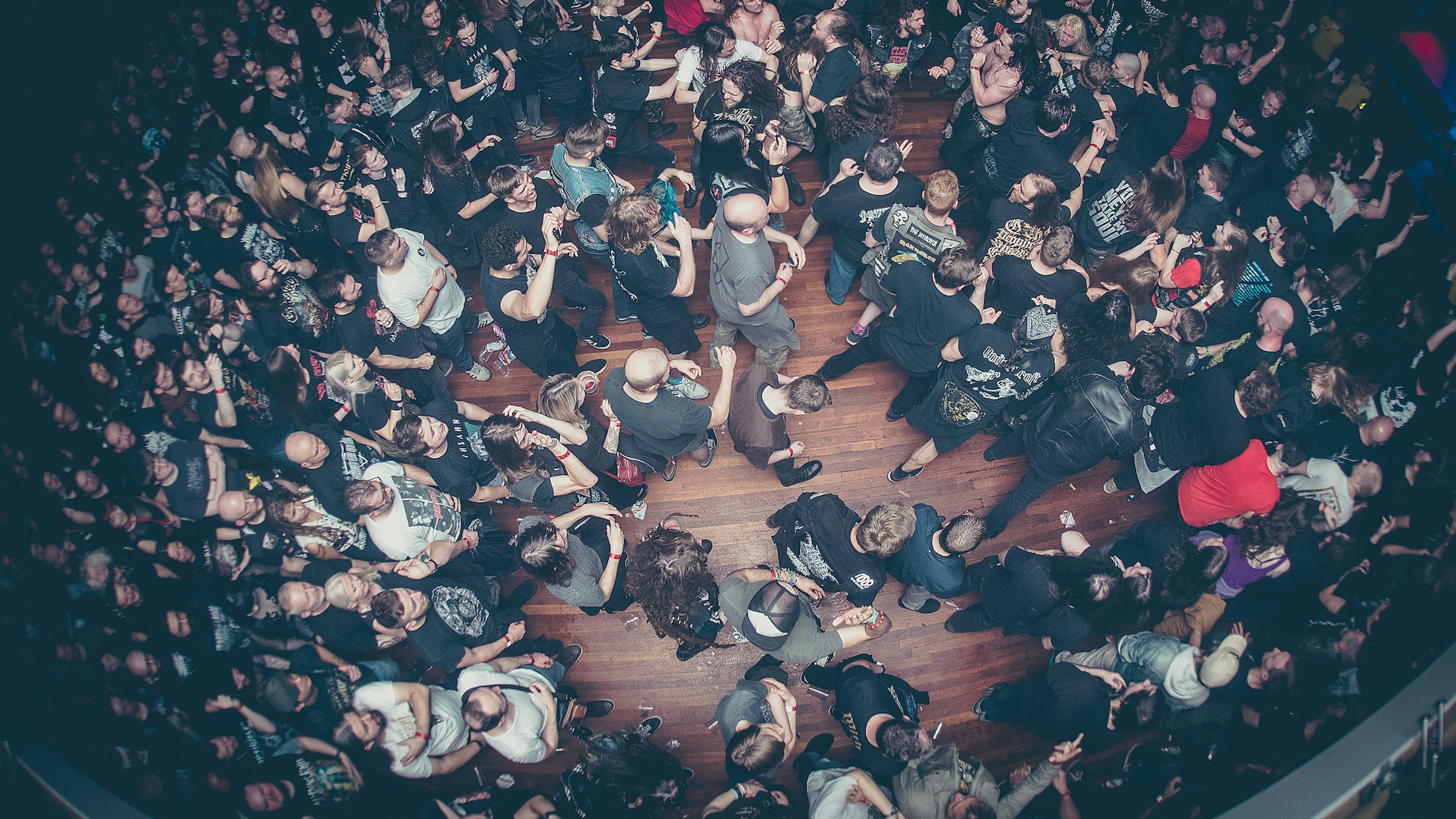 It’s grim up north. For one weekend at the beginning of November every year, however, it gets a damn sight grimmer as Damnation Festival descends on Leeds University Union, bringing with it a cross-section of the finest in extreme and esoteric metal for a celebration of the incoming darkness of winter.

It also brings in one of the most hardcore crowds in British metal – a bruising bunch who’ve departed the festival over the years with injuries varying from broken bones to missing teeth to good old-fashioned alcohol poisoning. Recent line-ups have featured Bolt Thrower’s final show, resurgent death icons Carcass and British doom royalty Electric Wizard, but with Brummie grind icons Napalm Death topping the bill this year the madness threatens to reach another level. Indeed, that this fourteenth edition is sold-out despite Slayer, Will Haven, The Prodigy and Corrosion Of Conformity drawing crowds elsewhere in the country truly is testament to its power as a pilgrimage for Britain’s sonic extremists.

Sure, there’s a fair amount of more slow-paced and textural brilliance on the 2018 bill – from stunning Irish doomsters Mourning Beloveth to rising, folk-inflected Scottish black metallers Saor to German prog collective The Ocean to Australian violin-enthusiasts Ne Obliviscaris – but with so much of the lineup built around brute force and up-tempo extremity we thought we’d grab our gumshields and jump in the pit to find out if that reputation for skull-cracking madness is truly deserved.

10. IHSAHN
Delivering not so much mosh as some very enthusiastic swaying, The Emperor frontman sneaks into this top-ten by dent of some of the beery black metal faithful getting excitedly punchy towards the back of the crowd during his main stage sub-headline. Taking nothing away from the blast-beaten weirdness of Lend Me The Eyes Of Millennia, the breathtaking (albeit misleadingly-titled) excellence of Celestial Violence, the thumping classic-metal inflections of Frozen Lakes On Mars (minor movement spotted!) and the sheer madness of The Grave but his is a set that’s full of more stroked chins than thrown fists.
MOSH FEROCITY: 2/10

9. BATUSHKA
The mammoth queues snaking out of the Tone Mgmt stage before Poland’s mysterious, masked black metallers head on are an omen that there’s not going to be much room for movement on the dancefloor. During the suffocating opening moments of their set – a complete run-through of 2015’s Litourgiya LP – it’s the sort of outright crush where people are shoving for room to breathe as much as in appreciation of the music itself. With their strange, faux-black-mass setup, it’s hard to know whether to bend the knee or slam bodies once things do settle down but by the closing salvo of Istina and Spaseniye a few beatings are being handed out – though whether by design, confusion or frustration is unclear.
MOSH FEROCITY: 3/10

8. CANCER
There’re hints of early-doors uncertainty, and a fire alarm towards the end of the Shropshire death metal legends’ mid-afternoon set causes some confusion, but with a packed room keen to worship these masters of the British underground there’s always going to be a little bit of madness. Songs like Death Shall Rise, Down The Steps and Into The Acid were written with twisted limbs and butted heads in mind. They lose points for so many of the crowd keeping their powder dry until later in the day, but that’s through no lack of effort on the part of a band who’re simply as unforgiving as always.
MOSH FEROCITY: 5/10

7. MONUMENTS
The prog-metalcore of Monuments stands out a little on a bill as kvlt as Damnation’s, but anything they lack in ‘trve metal’ cred is more than made up for in sheer enthusiasm and unwavering energy. Goaded on by top-notch frontman Chris Barretto, a crowd that’s about 25% established fans and three-quarters curious interlopers packed into the Eyesore stage find themselves circle-pitting, throwing each other into a wall of death and even indulging the stale tradition of getting everyone to sit the fuck down then JUMP THE FUCK UP! There’s little injury-risk amongst such a good-natured bunch, but perhaps even more fun to be had for it.
MOSH FEROCITY: 6/10

6. FUKPIG
Now we’re into the real violence. Taking the stage at two in the afternoon, no band really has the right to whip up the level of shield-yer-face chaos the antifascist, balaclava-toting Brummie crust-grind merchants deliver in their short set here. Subtlety has never been a strong point from the band who recorded ditties like Die Bastard and Necessary Heresies, and they set the bar early for the levels of self-endangerment that are to follow. Deliciously dirty stuff.
MOSH FEROCITY: 7/10

5. VADER
After Batushka, the second Polish outfit with a name loosely translating as ‘father’ on this list are significantly more unequivocal in their invocation of violence. The clock’s ticked past 10PM by the time the Olsztyn crew’s Tone Mgmt Stage headline set starts and, with a crowd that’s four sheets to the wind, the rough and tumble spills down the stairways and onto a dancefloor that quickly comes to resemble a very poorly-coordinated warzone. It’s fairly standard stuff from a band with Fractal Light, Never Say My Name and Prayer To The God Of War in their arsenal, but they’re nose-pulpingly impressive all the same.
MOSH FEROCITY: 7/10

4. ENTOMBED A.D.
Bringing a similarly inebriated sense of chaos to the main stage, Entombed A.D. remind us that despite the contractually-obligated letters tagged to the end of their moniker, they’re continuing a Stockholm death metal legacy that’s now over 30 years in the making. Some hip younger attractions (and empty stomachs) around the festival mean that the room isn’t quite as packed as it might be, but every bulky bruiser worth their beer belly is down the front and ready to throw down for the duration. The band are selling a t-shirt featuring a bandaged mummy ripping itself apart. By the closing salvo of Wolverine Blues, Supposed To Rot and Left Hand Path, we’re witnessing similar levels of self-destruction in the flesh.
MOSH FEROCITY: 8/10

3. INSANITY ALERT
We’ll be honest, we didn’t know an awful lot about Insanity Alert before their late-afternoon showing on a cramped Cult Never Dies stage. We do now. Boasting a logo that’s basically D.R.I.’s Skanker Man with skis on, the party-hearty sensibilities of Municipal Waste and a no-holds barred thrash attach that sees bodies strewn all over the show, the Austrian quartet uphold the grand tradition of thrash bands unleashing absolute havok at Damnation. Wielding signs that literally demand the audience mosh along with bangers like Disco Demolition, Macaroni Maniac and Glorious Thrash, they’re just about the most fun you can have while your clothes are being ripped off.
MOSH FEROCITY: 8/10

2. NAPALM DEATH
That the headliners miss out on top spot of this rundown will seem like sacrilege to some. It’s not through any lack of trying (or quality) on their part, mind. Led on by Mark ‘Barney’ Greenway – whose unquenchable rage and enthusiasm make him seem ever increasingly like a grindcore Mr Motivator – the unstoppably heavy figureheads smash their way through a ream of chaotic classics including When All Is Said And Done (sheer brutality), Scum (dirt and blood beneath the fingernails stuff), You Suffer (the most hazardous two seconds during any festival set, ever) and Suffer The Children (still overflowing with righteous rage). A non-stop pit and tidal waves of crowdsurfers mark this out as God-tier chaos, but they’re still edged-out, if only just...
MOSH FEROCITY: 9/10

1. ANAAL NATHRAKH
It’s their Brummie brethren who do it, too. Where Napalm Death strive for the betterment of mankind, though, the sheer Stygian nihilism of Anaal Nathrakh seems to open up fresh levels of hell. Rolling in on the back of this year’s astonishingly severe A New Kind Of Horror LP, nightmare cuts like Forward! And Obscene As Cancer reaffirm their b*stard credentials as Britain’s heaviest band but it’s this evening’s trawl through their back-catalogue that truly fuels the bloodshed. From a fittingly-titled Monstrum In Animo through In The Constellation Of The Black Widow and the almost-relief of Forging Towards The Sunset right to a cacophonous close, the Leeds Uni Refectory looks like a scene caught somewhere between a fight club and an abattoir. Indeed, it’s a fitting highlight to one of the finest festivals of the year. Here’s hoping our wounds have healed in time for round 15 in 12 months time...
MOSH FEROCITY: 10/10