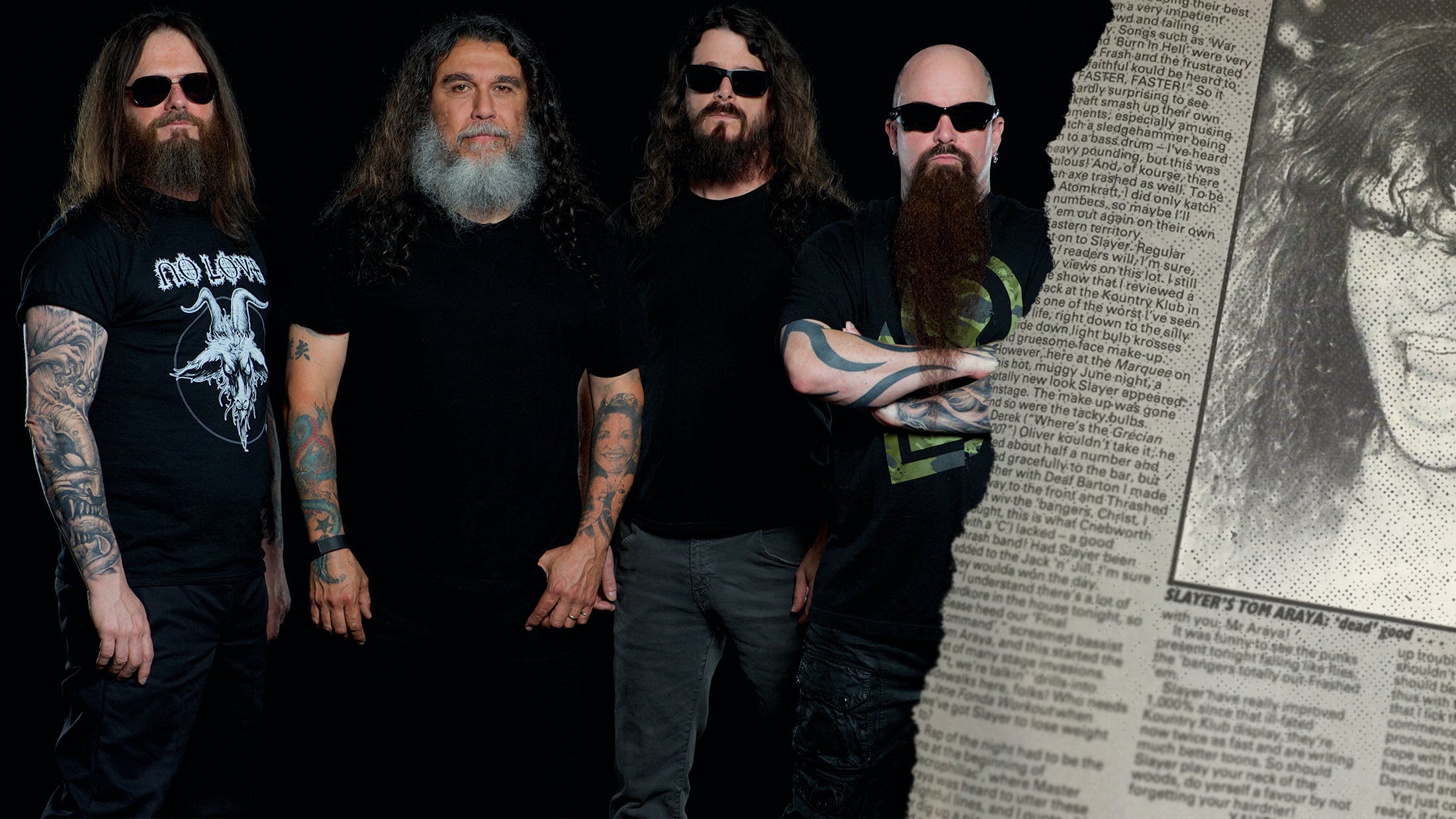 June 24, 1985. It’s a clammy night in Central London and to those assembled for a pre-gig drink in The Ship on Wardour Street there is a genuine sense of anticipation about the night’s proceedings. The lank-haired landlord pulls pints, fag-in-mouth and liberally sprinkles ash into our lagers, but we are too excited to even notice. For those of us obsessed with the burgeoning U.S. thrash underground, Slayer’s first show on these shores has been a long time coming.

In fact, it’s been close to two years since the Californian four-piece made their mark with Aggressive Perfector, the opening track on Metal Massacre III – the latest in a series of ground-breaking, underground collections compiled by Brian Slagel, the head honcho of the fledgling Metal Blade label. Since then, the band have delivered their debut album, Show No Mercy, and its successor, Hell Awaits - arguably the more accomplished of the pair.

As the four-piece step out on to the stage at an ultra-sold Marquee Club, bass-playing frontman Tom Araya – an impressive mess of flailing hair and a man armed with a genuinely disturbing piercing vocal scream-cum-growl – establishes himself as an instant focal point. His dextrous playing interlocks immediately with Dave Lombardo’s tenebrous bass drum fills and drives the band’s sound relentlessly on.

A 14-song set flies past as the 500-plus capacity crowd slams itself into near-exhaustion with a callous disregard for the blood that splatters across the dancefloor. An encore of Chemical Warfare leaves us all utterly drained and staggering out of the club in search of air. The talk is simple: it does not get more extreme than this…

And yet, with Slayer it truly did. If Show No Mercy and Hell Awaits have lost none of their brutal appeal, then 1986’s Reign In Blood remains the album by which all extreme metal albums are still judged. Since then, of course, the band have enjoyed an illustrious career which has spawned a further nine studio albums, the latest being 2015’s Repentless – their first since the passing of Hanneman two years earlier.

In all their time together, Slayer have remained a fearsome live proposition. When, for instance, the foursome played Ozzfest at Milton Keynes Bowl in 1998, certain other acts spent time jockeying for a position on the bill. Slayer, however, made it clear that they really didn’t care who they followed or who came after them. Essentially, the result would be the same. And it was.

Their 10-song set was hard to beat, kicking off with a monstrously heavy version of South Of Heaven and ending with a frantic Angel Of Death (still the only song in the history of rock to my knowledge to contain the word ‘abacinate’…). In fact, members of Pantera, Fear Factory, Soulfly and the Foo Fighters watched from the wings as Slayer created one of the biggest circle pits seen at a festival.

Two decades have elapsed since that Milton Keynes show and Slayer are undertaking one final world tour – the UK dates of which have just been announced. Certain wags have already suggested that it may well be a long goodbye. That’s as maybe. But ultimately, Slayer will bow out doing what they do best while they still can. And I, for one, will be there at that London show, and wishing it was 1985 all over again. Pass the neck-brace…