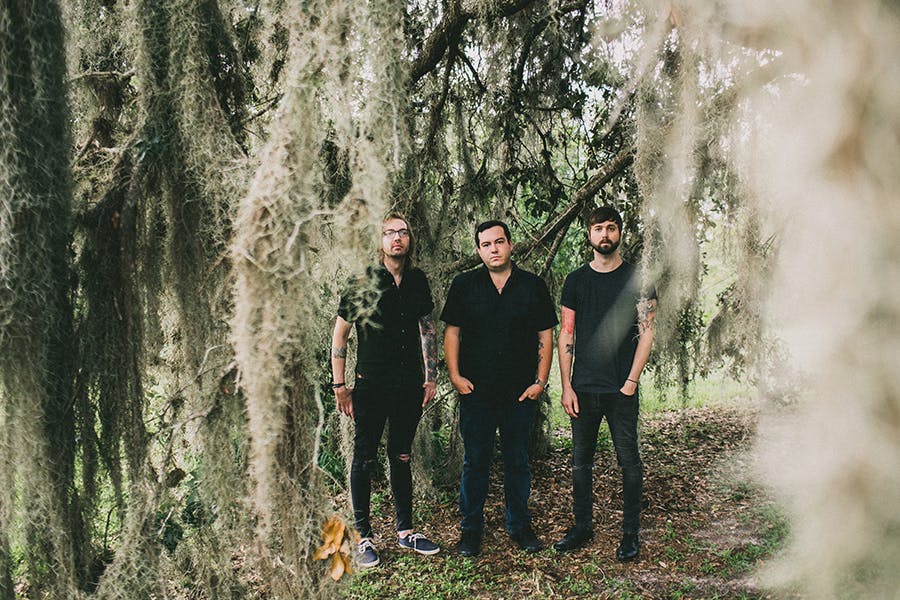 On March 29, 2014, AJ Perdomo announced that he was quitting The Dangerous Summer. The frontman cited a “complete disconnect” with then-guitarist Cody Payne, and turned his back on one of the emo scene’s most respected names, which in turn led to the remaining members calling time on the band entirely.

Allegations about the guitarist's mishandling of band finances soon emerged, before AJ disappeared from the limelight and Cody formed new band Floodlove, which he controversially promoted through The Dangerous Summer’s social media pages. Not long after, their name was back in the news when Cody was arrested and jailed on charges including burglary. Then things went quiet.

But in July of last year, AJ, guitarist Matt Kennedy and drummer Ben Cato announced The Dangerous Summer were back as a three-piece, stating a desire to “finish what we started”. Now, as they celebrate the release of their self-titled fourth album – and first in five years – AJ has a lot to reflect on, as he tells Kerrang! about the band’s split and reformation, his feelings about Cody and his vision for The Dangerous Summer’s future…

Why did you leave?
Internally, the band was losing it. Cody was super negative and was weighing us down, and we were just going through the motions; we were doing tour after tour and moving just to move. After seven years on the road and making albums, it drives you crazy. We all needed some time away. Now, everything feels right again.

had you considered walking away before you did?
Yeah, there were a lot of stressful and negative experiences. There were a million times when I said, ‘I can’t do this anymore,’ but I kept going. Being young affects the way you handle relationships. I think back to all the times we had stupid fights and wonder, ‘Why did I entertain that? It’s so stupid (laughs)!’ I had a totally different mind-set. I was just a kid back then.

How badly were the issues with Cody affecting morale?
There was definitely a bad atmosphere. Everyone felt uncomfortable, but we never communicated the facts of the situation. We turned a blind eye to everything that was going on. We all loved the band, and it’s hard when someone steers it in the wrong direction and goes down a dark path, because you’re married to that person. We didn’t realise how bad things were, but it needed to fall apart in order for us to clean ourselves up.

When you left, there were allegations that Cody had mishandled band money , and he's since been jailed for other offences. Are you surprised to see things pan out for him the way they have?
Everything in life catches up to you. I wish him all the best – he’s a talented guy – but in his own world, he needs to figure things out. All we as a band can do is figure out our own lives; we’ve got ourselves together and we’re looking to the future. I don’t wish anything bad upon Cody – I hope he sorts himself out and lives a good life after all this.

Was Cody being out of the picture an important factor in the band returning?
Yeah, exactly. Him being out of the picture threw a lot of the momentum into us getting back together. He no longer had control over us, and he didn’t have access to things like the band’s social media – before he lost that, everything was a mess. We slowly got hold of everything and reached a point in our lives where he didn’t hold any weight over us. We took the band, believed in it and pursued it as aggressively as we possibly could.

Before any thoughts about a return with The Dangerous Summer entered his mind, AJ was living a happy life with his young family in Los Angeles. He had a normal 9-5 job which he biked to in the mornings, and a livelihood he describes as “beautiful” and “like living in a bubble”. Slowly, however, he began to long for a return to the world of music. He missed “the craziness and all the shit that happens when you’re an artist”.

Responding to an offer to play a festival in the U.S., AJ, Matt and Ben got together to discuss the prospect of playing shows, before things quickly steamrolled into a plan to permanently reform and make a new album. They signed a deal with Hopeless Records, announced the new LP and tour dates – including a run of UK shows with Moose Blood in March – and set about plotting the future of the band they’d fallen back in love with.

In light of the positivity surrounding the band now, would you say this new album is the most hopeful The Dangerous Summer have sounded?
Yeah, we’re in a very positive place now. We’re over all the shit that went on. [Our previous album] Golden Record was so dark – it showed where we were as a band. Now, everything feels fresh, and it was like the first time writing a record again. We feel alive. Being able to come back and have this outlet is incredible.

Do you recognise the darker side of you that wrote Golden Record?
It’s crazy how I used to be. I was young and living off the air of being in a band, and there were drugs involved. We were burning ourselves out and losing our minds. I didn’t know who I was back then. I was lost. Those tracks convey that weird headspace, and I wouldn’t say I relate to that version of myself now. But it’s an important chapter of the band. People can relate to Golden Record and the feelings it talks about.

But despite those dark periods, new songs of yours, like Fire, seem to be yearning for the adventures of the past...
The new record is very reflective. When I wrote Fire, I was missing all the relationships I had and all the people I’d met over the years. There are a lot of nostalgic moments on the album, but there are also times where I think about what comes next. One of the reasons we made this a self-titled record, is that we’re bridging the gap between the two eras of The Dangerous Summer. We’re tying up loose ends and saying, ‘This is where The Dangerous Summer is at right now, and this is where we’ll be in the future.’

Where do you see the future of The Dangerous Summer?
We’re going to push forward as hard as we can. I had this epiphany and realised that I needed to do music again, and my aim is to be a musician for life. I lost sight of that goal for a second, but now I want to create and be an artist, and do whatever it takes to get to that next step. No matter what, I’m going to keep on the path of musicianship and never stop.      The Dangerous Summer have healed, grown and put the drama and the negativity of the past behind them. With a rejuvenated frontman, a stunning new record and the backing of a scene that’s been longing for their return, 2018 looks set to be the year that AJ, Matt and Ben can, at long last, allow the music to do the talking. Finally, their future looks bright.

THE DANGEROUS SUMMER'S NEW ALBUM IS OUT NOW ON HOPELESS RECORDS. THE BAND TOUR THE UK WITH MOOSE BLOOD IN MARCH. DATES ARE AS FOLLOWS:

This is shaping up wonderfully.