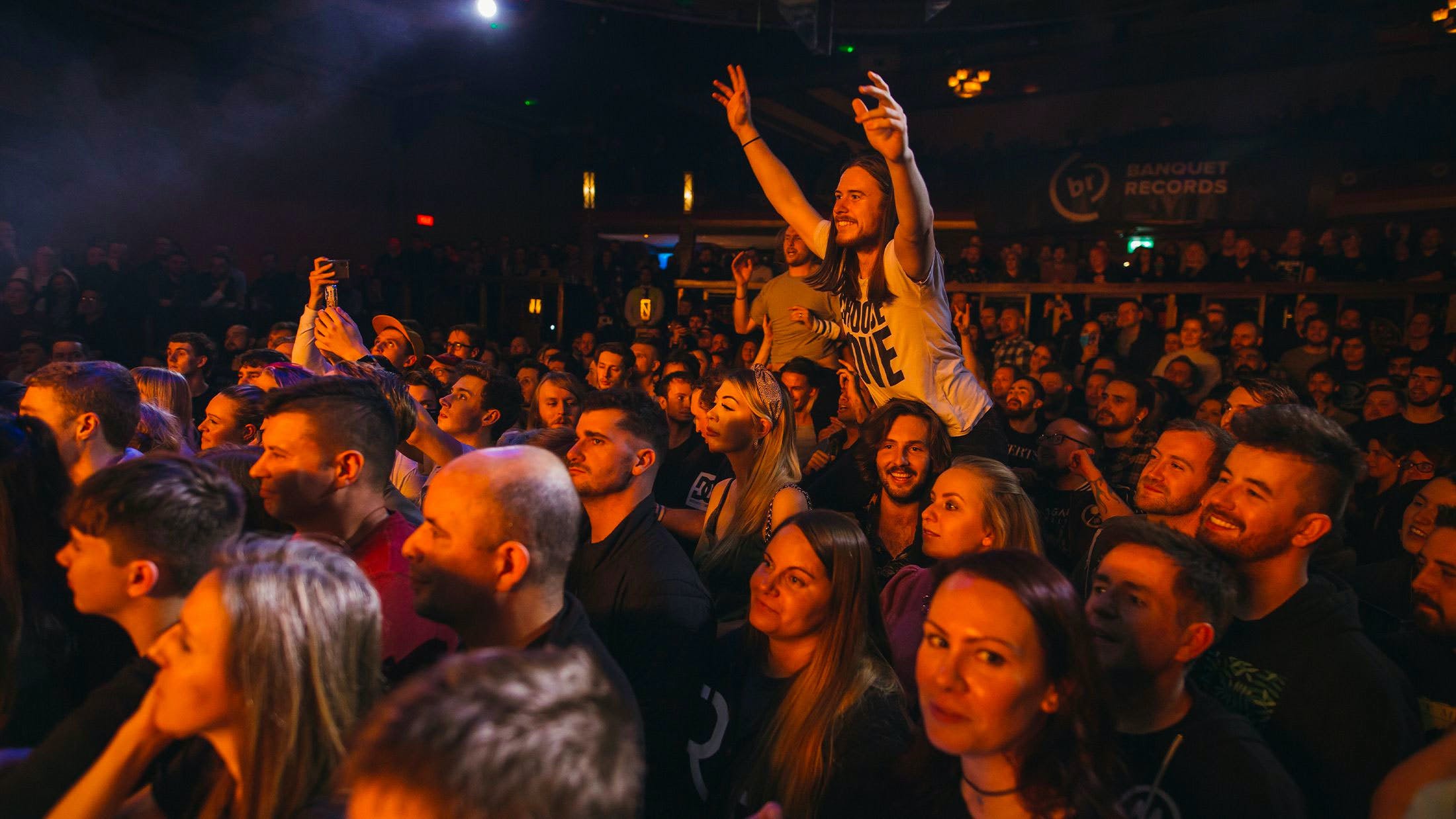 Last month, Rise Against frontman Tim McIrath and guitarist Zach Blair hit the UK for a series of special shows. Rather than the huge stages we’re used to seeing them on, the pair instead dropped in on independent record stores and venues to re-work their ferocious catalogue for an all-acoustic set – it was the first opportunity UK fans had to hear songs from their brilliant new album Nowhere Generation live. It’s not every day you see a circle pit and crowd surfers at an acoustic gig but, hey, that’s exactly what went down when they played the Banquet Records in-store at Kingston’s PRYZM. Here Tim talks through the challenges and rewards of being forced to go acoustic during the pandemic, the songs that do – and don’t – work, oh, and most importantly: why you really, really, really should support your local venues and record stores...

You’ve just wrapped a series of UK acoustic shows – why do that and not wait for the full Rise Against experience?
“Here's the thing, we've never done anything like this before. Zach and I will occasionally show up at a record store and play three or four songs for contest winners or whatever, or go to radio stations and do a similar thing, but it's never more than four or five songs. The closest thing we did to this was the Ghost Note Symphonies – but that was with the full band so we had a lot more tools to play with, and we put on a big show for an hour and a half. This thing started out just as in-store performances because we couldn’t go to the UK and tour properly. It just wasn't possible, logistically, for American bands to play big gigs when we would have had to put the tour on sale, but this was a consolation prize! Nowhere Generation came out five months ago so we wanted to at least get, like, some boots on the ground. Then they moved the in-stores to what they call out-stores – I think the UK owns the patent on this idea, because I’ve never seen anything like this before in the States.”

Rise Against are known for being supporters of so many different causes, but you’ve also always been incredibly vocal in your support of independent record stores and independent venues. Why are they such a part of your DNA?
“I guess it’s because I still consider us to be a part of that whole ecosystem. That's where we came from, it’s who brought us up. Besides being guys in a band, or just guys who grew up buying records and going to little venues, those are the places that changed our lives. Some of the most important shows we saw were places like the Metro in Chicago, or the Fireside Bowl. The Fireside Bowl is still there but they don’t really do shows anymore – you can bowl there, though! If you have a good experience in your life, you want to share them. I just hope that young people are having those similar experiences because I know the world has changed so much, and the scene has changed, shows have changed, the way we consume music has changed. To me, shows, record stores, all that, is just so instrumental to who I am. I just have so much respect for record stores; brick and mortar record stores.”

Speaking of which… How have you adjusted to playing the kind of shows where every cough and wrong note echoes like an explosion? Are they more intimidating for you to play than the big festivals and arena shows?
“Totally, yes, you're so exposed! I mean, every little thing. I can hide behind amps with Rise Against – I can hide behind the noise and volume – I can duck out of a whole part and the crowd will sing along! I've made my way through all kinds of shows. But this? There's no faking it. If your chair creaks, or you were to get the hiccups… We did get Indian food before the Leeds show, so I was burping – that was a bad idea.”

When you discussed making Nowhere Generation with Kerrang!, you said you were dreading playing Forfeit live in case you messed up the finger picking. Have you overcome those nerves now?
“Trust me, I've conspired to cop out of that song in so many ways, be it passing it off to Zach or doing it in a different way. But now I'm comfortable with it. I get through it. I need these songs to become muscle memory and with most Rise Against songs, I can do that. Forfeit is a fun one, I played it on the entire tour with Descendents and The Menzingers and there was one night where I really stumbled and I freaked out so I stopped playing it for, like, two nights. I did it great for three weeks then I stumbled! I was like, ‘No, I can't do it anymore,’ but then I said, ‘If I don’t get back on this horse, I’ll never put this song back in the set and it'll become this thing’. When we played our last show in Chicago, I was like, ‘Fuck it!’ And I did it fine. I was back on the horse!”

Are there any Rise Against songs that just flat out can’t be done on an acoustic? Is The Eco-Terrorist In Me off the cards for a gentle strum?
“(Laughs) You never know! Sometimes you’ve got to get real imaginative to make it work. But I can't imagine State Of The Union working, it's just not going to be the same song – or Eco-Terrorist... and Dead Ringer. Acoustic guitars only sound so good played hard and fast, they don’t sound good that way. They require you to play with a little bit of finesse and then you have to find a way to sing to it. But that would be a fun challenge to take the songs that you think would be least acoustic appropriate, and then try to make them.”

Likewise, are there any Rise Against acoustic versions that you think are better than their original studio counterparts?
“Oh, that's a great question. I really like Faint Resemblance that we added on the ukulele for Ghost Notes and we've been doing Wait For Me me these shows that's pretty cool as a ballad-y kind of song. The Violence and Prayer For The Refugee worked out really great too, and Audience Of One is a good acoustic song, too. Some of them are just as good and some of the fans would argue are better as an acoustic.”

We spoke about how you had hesitance about playing Forfeit live. Now onto an older one: Rumours Of My Demise Have Been Greatly Exaggerated is one of the best Rise Against songs ever and you never play it live… Level with us, what’s the deal?
“Oh my god (laughs). There are songs that we’ve never played live for all kinds of different reasons. First of all, it's got to be a song that all four of us – or at least one of us – has some sort of enthusiasm to push for it. I mean, no-one's ever pushed for that. It's funny you bring this up, because I had an issue with that song that I've since gotten over, but it really is a vocal thing. It was a challenging song vocally, especially in that pre-chorus when I sing, ‘When I dieeeeeee.’ Probably like five years ago, if you asked me to hit those notes in the middle of the show, I would just never hit them. And I'm actually a far more confident singer today as I sit here than I was five years ago, so I'm more open to try shit out! If somebody would have brought that song up before, unless someone in the band was really pushing for it, I was going to be like, ‘Let's not do that one.’ But if they brought it up now I'd be like, ‘Alright, I'm up to the challenge, let's do it!’”

Rise Against play Download Festival in 2022. Get your tickets now.