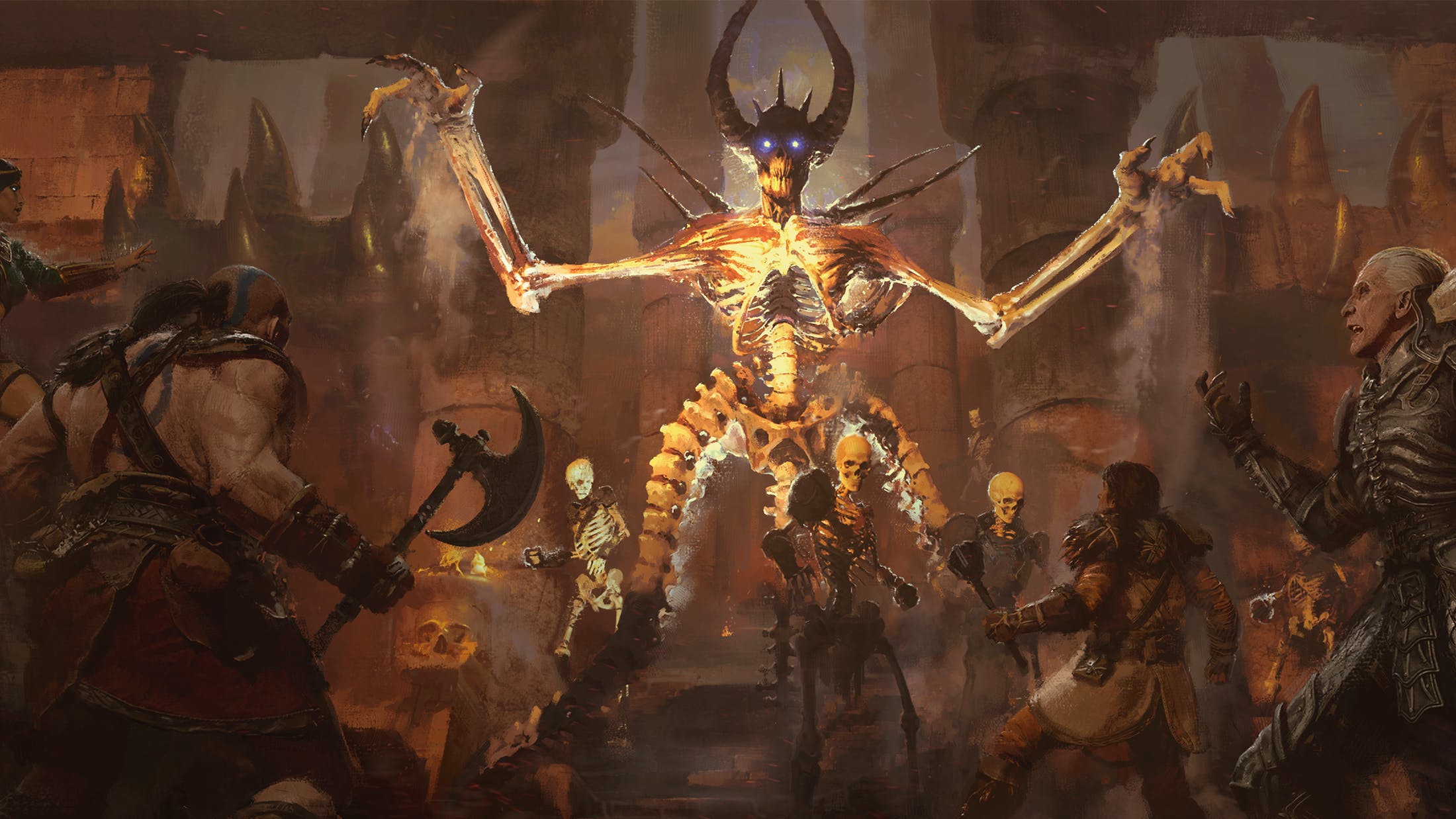 Diablo II changed the game when it was released by Blizzard Entertainment in June 2000. Picking up where the original had left off in 1997, while making a quantum leap in terms of intricacy, immersion and the sheer addictiveness of its core hack-and-slash, loot-pursuit gameplay, it offered an experience that drew players in and ravenously consumed hundreds of hours of each of their lives. Even more memorable, however, was its downright heinous imagery, inviting players to descend right into the depths of hell and unleash chaos at every turn. It could hardly have been more metal had it tried…

With fully-3D, 4K remaster Diablo II: Resurrected hitting servers and shelves this week, hardcore fans and newcomers alike will be able to return to the town of Tristram, and beyond, to contend with the series’ relentless fire and brimstone, while wading knee-deep through blood and guts once again. The gore-streaked landscapes have never felt more terrifying. Its undead hordes, Greater and Lesser Evils have never seemed so alive. Hell, Lacuna Coil’s Cristina Scabbia has even written a song with Italian YouTube supremo Mark The Hammer to celebrate its release.

“I’ve been listening to Lacuna Coil since the early-2000s,” grins Associate Art Director and confessed headbanger Dustin King, joining us today to explain why there’s never been a better time for metalheads to jump aboard. “As a metal lover, seeing an artist as great as Cristina connect with something you’ve worked on is a real honour. A lot of metal bands nowadays grew up with video games. They’re influenced by our content in the same way that we are by theirs. It’s artists being influenced and jazzed by each other, which is always an awesome thing to see! And this is a heavy metal game. No matter what character you roll, or how you choose to play, metal fans are going to find so much in here to enjoy!”

Interested in finding out why exactly this could be the most metal video game ever? Stay awhile, and listen…

Many of Diablo II: Resurrected’s developers are metalheads

It was no coincidence that Diablo II first arrived at the height of the nu-metal phenomenon, when crunching sounds were ruling the charts and invading the mainstream. “I remember being in college around that time,” says Dustin. “You could see metal beginning to influence developers. Composers were using rock and metal albums as the influence for the entirety of their game scores, drawing from that ambience and mood. Then you had the more aggressive aspects of metal coming through in marketing materials. Diablo II was definitely part of that.”

When it came to the remaster, Dustin and many of his colleagues would turn to metal as a soundtrack from which they could draw inspiration. Having grown up just across state lines from their Richmond base, Virginia’s Lamb Of God are one of his favourite bands, along with deathcore outfits like Aborted and Shadow Of Intent. Listening to Lorna Shore’s To The Hellfire, he feels, perfectly matched the OTT approach to the imagery in Diablo II: Resurrected. “We went more blood, more gore, more fire, more pentagrams. We really juiced it up.”

Dustin enthuses that given the chance, he’d love to see the “moody” mid-paced sounds of Ghost layered over Diablo, while Cradle Of Filth would also be a darkly delightful match: “The screams? The shrills? The mood? The atmosphere? It’s all Diablo.” Even getting to do an interview like this to introduce the team’s work to a specifically metal audience, he tells us, is a genuine privilege.

“As a lifelong metal fan, getting to work on this title – and getting to talk about it with Kerrang! – feels like everything coming together. I would definitely say that Diablo II is the most heavy metal game ever…”

The Devil has always had all the best tunes

With its blend of dark fantasy, demonic horror and epic good-vs.-evil adventure, the original game demanded a soundtrack fit for fighting in the shadows. Where some developers would’ve made the obvious choice of layering on a pulsating high-tempo track, Diablo’s were insistent that atmosphere was key and steered into the metal-adjacent genres of dark folk and ambient industrial to conjure the sort of nightmare soundscape with which metal fans will be more than familiar.

“Everyone remembers that one song from the opening of Diablo II called Tristram,” Dustin explains. “When original composer Matt Uleman wrote that song, he spoke about trying to capture the old psychedelic rock, Led Zeppelin III type of feel. That’s the tone you’re launched into the game with, right off the bat: very moody, very dark, very textural…”

You don’t mess with the classics, either. One of the key philosophical pillars of Diablo II: Resurrected’s development was that the game was already recognised as an all-time favourite for good reason, and that extended to the soundtrack. “This game is so beloved that we didn’t really want to change it,” Dustin continues. “People know what they remember, and they want what they remember. The music was very special to players of this game. We’ve got a remastered track in there, but we’re not touching the original score. It’s way too special, way too iconic.”

Whether wandering the streets of Tristram, crossing the eastern desert in search of Tal Rasha’s tomb, stepping into the shadowy dungeons, or descending on into the depths of hell itself, the story of our band of adventurers racing to stop the Lord Of Terror from raining down chaos on the world predictably lends itself to some iconic visuals.

Although Dustin stresses that Diablo II’s focus on atmosphere and dread has more of a doom or atmospheric black metal vibe, the fast-paced action and focus on OTT demonic imagery will surely appeal to thrash and power metal fans, too. Hell, the game even shares its penchant for flaming pentagrams with the mighty Slayer.

“What’s great about this game is that you can go to all manner of locations and find an album cover somewhere,” Dustin continues. “And with the clarity of the upgraded graphics, you can see all these scenes which are basically heavy metal album covers staged all over the game. You don’t get much more metal than pentagrams on fire, buckets of blood, burning bodies, and tortured souls crawling up out of the pits of hell. It’s really metal!”

The Dark Wanderer will haunt your dreams

Great tales need compelling villains, and there are none more fascinating or painfully tragic than The Dark Wanderer, who appears prominently in Diablo II: Remastered’s fully remade cut scenes and across marketing material. An older version of the heroic warrior from the first game who seemingly defeats Diablo by melding himself with the demon’s Soulstone, he reappears in Sanctuary having been corrupted by the darkness within…

“When you first come across him in the game, he’s human,” explains Dustin. “He’s very brooding, he’s got the hood on, he looks important. But then it turns out he’s become a vessel – spoiler alert – for the Devil. He feels like the kind of iconic figure who can connect with anyone interested in this genre of music, a representation of what metal is all about.

“One of the things I’ve always loved about metal – and this game – is that concept of good-vs.-evil and how you come out of that. The Dark Wanderer is someone that you journey with, and get to know, then all of a sudden, this big event happens and you have to [come to terms] and figure out what to do next. That’s metal. That’s life. Metal has helped all of us get through really tough situations, taking the good and the bad, mixing it up and crushing whatever is in front of us.”

Twenty-one years is a lifetime in games development, and Diablo II: Resurrected takes full advantage of the technological developments in the years since 2000 to bring the game back to life with an unparalleled high-production sheen that feels cutting edge while retaining the original’s heart and core gameplay. Blizzard have been waiting for hardware to catch up to their vision that the remaster this all-time great deserves, and now that it has – across PC and consoles, with the game appearing for the first time on PlayStation, Xbox and Switch – they’re committed to smashing it out of the park.

“Diablo II is the Holy Grail,” nods Dustin, reverentially. “It’s seen in the games industry as the big guy, the one that everybody wants to treat with the utmost respect. You’re getting that 20-plus year leap in tech, which could make the game almost unrecognisable. But I think we’ve done a good job in retaining what made the original so special. When people look at this version and say to me [despite it being vastly improved] that this is how they remember the original game in their head, I take it as a huge compliment.

“Obviously, this has been built with our passionate fanbase in mind, but we’re also so happy to be opening up the world of Diablo to tons of people who never had access to it before, or who never got to play it on PC in its old glory. We hope that that will pull in new players who’ll get to experience the beauty of this game in the way that we got to experience it back then. It’s been an incredible experience getting to touch a piece of history like this. This type of experience doesn’t come along too often...”

Watch the video for Swamped XX, taken from Lacuna Coil’s Comalies XX project – which sees them give songs from their 2002 third album “a 2022 dress and see that this guy or girl who was born 20 years ago would still look f*cking slick”.