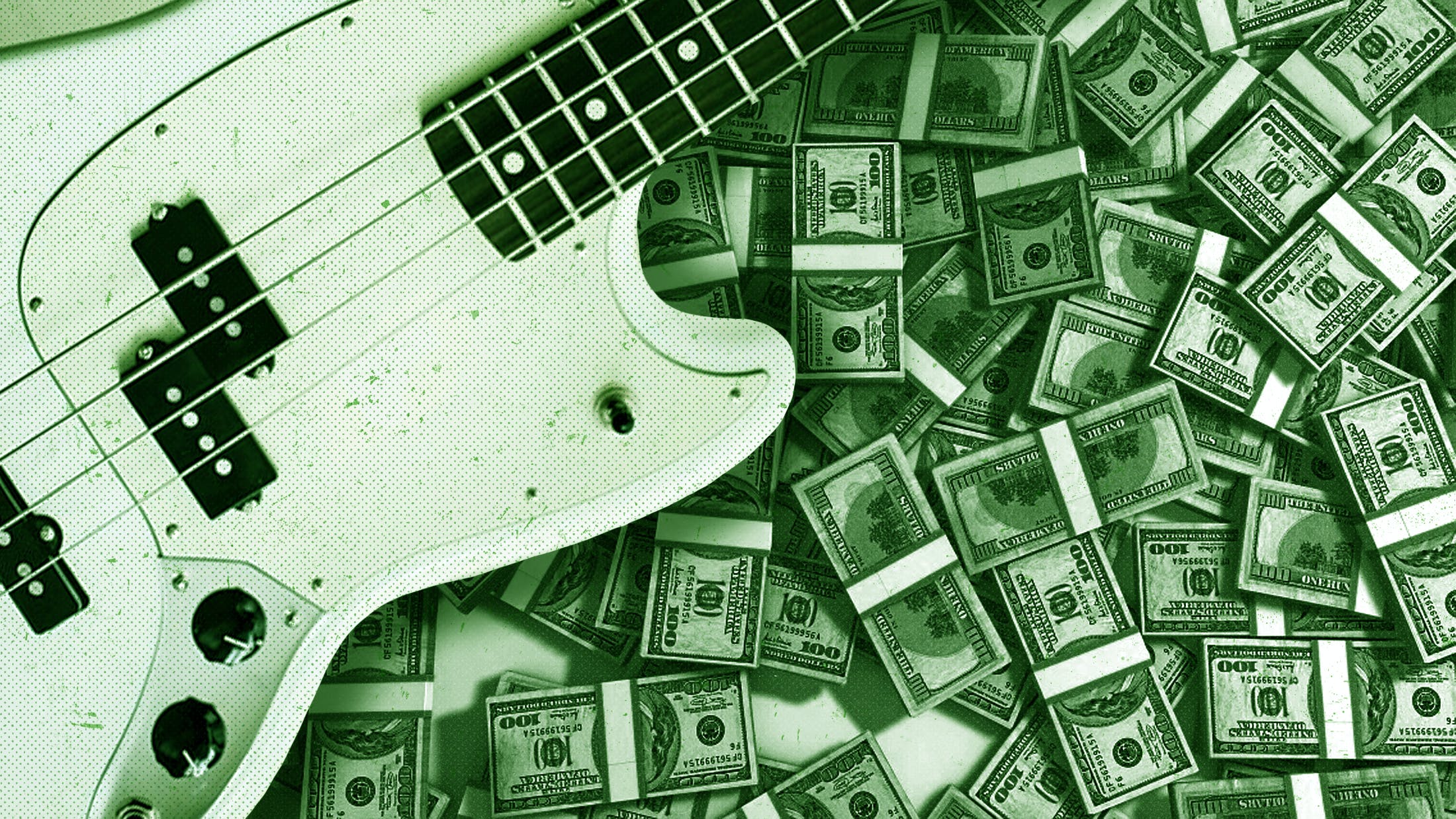 What do Livin’ On A Prayer, Under The Bridge and Smells Like Teen Spirit have in common?

They’re all huge hits? Sure. They’re all classics beloved of successive generations of rock fans? Absolutely. But those songs are also all now owned – partially or completely – by someone who had nothing to do with actually writing them.

It’s all part of a trend for veteran rock stars to sell their song catalogues to music industry companies such as Hipgnosis, Primary Wave and Round Hill. These deals – known as buyouts – involve the songwriter selling all or part of their revenue streams for their songs. There is big money on offer for classic catalogues – but it does mean that, in future, the royalties paid when songs are streamed or used in adverts and films will go into the bank account of a corporation, rather than the musician who wrote them.

Given that song copyrights last for the writer’s lifetime plus 70 years, rock stars are potentially giving up a vast, steady income for themselves and their heirs. More worryingly for fans, they could also lose control over how their songs are used in the future.

But the thought of your favourite rock banger popping up in terrible films or adverts for life insurance has not deterred some of rock’s biggest names from selling up. Red Hot Chili Peppers reportedly sold their songs to Hipgnosis for around $140 million, Dave Navarro cashed in his Jane’s Addiction tunes with Primary Wave and others, including Mötley Crüe’s Nikki Sixx, Alice Cooper and Disturbed, have followed suit, with a host of other major deals rumoured to be in the pipeline.

So why is it happening now? Music industry experts say it’s due to a combination of factors: musicians need the money thanks to COVID-19 preventing them from touring, while their streaming royalties remain pitifully low. The City suddenly sees music as a safe bet for investment. And earlier generations of rockers are beginning to contemplate smooth estate planning and the sensitive handling of their legacy.

“And it was a shitload of money, I’m not going to lie to you,” laughs Richie Sambora, who sold his share of Bon Jovi anthems such as Livin’ On A Prayer, You Give Love A Bad Name and It’s My Life to Hipgnosis last year (Jon Bon Jovi retains his own stake). “But that wasn’t the thing.”

Indeed, Richie maintains he had bigger offers from elsewhere, but chose Hipgnosis – founded by Merck Mercuriadis, a music biz veteran resilient enough to have survived managing both Guns N’ Roses and Morrissey – because he could secure his daughter’s inheritance without worrying about what would happen to his songs.

“I wanted to work with Merck,” he chuckles over a joint Zoom call with the executive. “I always go by my instincts and I was exactly correct. I didn’t need the money, but I want Merck to be the proprietor of my songs, because I know he will continue my legacy, and that will keep me in the business. I love the guy, what can I tell you?”

Hipgnosis is not quite so popular with everyone in the music business, having hugely disrupted the usually low-profile music publishing sector by paying big money for catalogues. But Merck shrugs off such criticism and says he invested in Richie’s songs because “they changed people’s lives”.

“What’s made Hipgnosis successful is that we recognise these great songs become a part of not only the fabric of people’s lives, but the fabric of society,” he adds. “We’ve got a responsibility to manage them in the best way we can.”

Hipgnosis claims it does that better than anyone, but it’s not the only company in the buyouts business. Traditional music industry superpowers such as Universal Music and Sony Music have also started doing deals, while a wave of venture capital giants are also entering the fray, waving very large cheque books indeed.

But the company that arguably started the trend is Primary Wave, which launched when Courtney Love arranged a deal with them for a slice of Kurt Cobain’s publishing catalogue way back in 2006. Deals with the likes of Styx, Disturbed and Alice Cooper have followed, accompanied by some innovative commercial partnerships. Kurt got his own Converse sneakers, while Alice now has hot sauce and hamburger lines.

“Our competitors simply don’t do these things,” says Primary Wave CEO Larry Mestel. “And that’s the biggest reason why artists are looking to sell to, or partner with Primary Wave.”

Larry explains that he’s only in “the icon and legend business” and that rock and metal catalogues “tend to hold up over time extraordinarily well”. But he insists artists always remain in charge of how their songs are used.

“We give artists complete control in saying no,” he says. “We have a track record of being artistically friendly, of increasing the value of the catalogues and the partnerships we’ve entered into. Our best references are our artists.”

However, Larry warns that not every company coming into the market may be so respectful. Primary Wave has been backed by financial giants BlackRock, but while they, Blackstone (which has invested in Hipgnosis) and KKR may sound like metal bands, bankers and rock stars make for an unlikely alliance. After all, financial institutions wouldn’t invest billions unless they were confident of getting even more back.

“It should be a concern to the artist community, because some people have no creative sensibility or marketing or brand sensibility,” Larry says.

Others in the industry are also concerned. None of the rock managers spoken to by Kerrang! for this piece wanted to go on the record, but several worry that songwriters are rushing into deals that will lose them money and credibility in the long run.

Crispin Hunt is chairman of songwriters group The Ivors Academy and a songwriter who has worked with the likes of You Me At Six. And he warns that younger writers in particular should resist the urge to sell, despite the financial pressures caused by the pandemic.

“If a genius in his 80s can get £200 million for his songs, then why not?” he says. “But there aren’t many people who can command that kind of figure. People are saying, ‘I can’t survive at the moment, somebody’s offering me half a million quid,’ but, if they held onto it, their grandchildren would probably see £10 million. We’ve been forced into a corner where everybody’s just got to take the money – one in the hand is worth 20 in the bush.”

Plus One – written by You Me At Six and Crispin Hunt

Meanwhile, the explosion in music streaming around the world means companies that build up large stockpiles of songs will almost certainly see a healthy return on even their biggest investments.

“If you own an enormous, aggregated catalogue then you can make a load of money,” says Crispin wryly. “But it’s no coincidence that ‘aggregate’ also means ‘rock crushed into tiny fragments and used to pave the driveways of billionaires’.”

Crispin, however, does hail “music lover” Merck Mercuriadis for his efforts to ensure songwriters get a larger slice of streaming royalties. At the moment, songs only receive around 15 per cent of the streaming pie (which is split between writer and publisher), whereas around 55 per cent goes to the recording (to be split between artists and record labels). If that changed, Crispin believes more songwriters would be able to afford to hold out.

“They may not have to sell to me then,” agrees Merck with a laugh. “But most of the people I deal with are incredibly wealthy people in the first place and it’s not about the money. It’s about putting their songs into the hands of someone that will look after them properly.”

While your favourite band ponders whether to cash in, some Kerrang! readers will no doubt worry about where their favourite anthems could turn up if they’re owned by bankers. But Merck Mercuriadis wants to reassure you that nothing will ever happen to Hipgnosis-owned songs that could damage their reputation.

“Kerrang! readers should know that I’m one of them,” he says, noting he has read K! since its very first issue. “I’m never going to do anything other than treat the music respectfully. We all care about this incredible legacy, and we’ll all work together to protect it.”

'The Biggest Deal In Metal… Every Wednesday!'

Rock'n'roll all night and party every day!