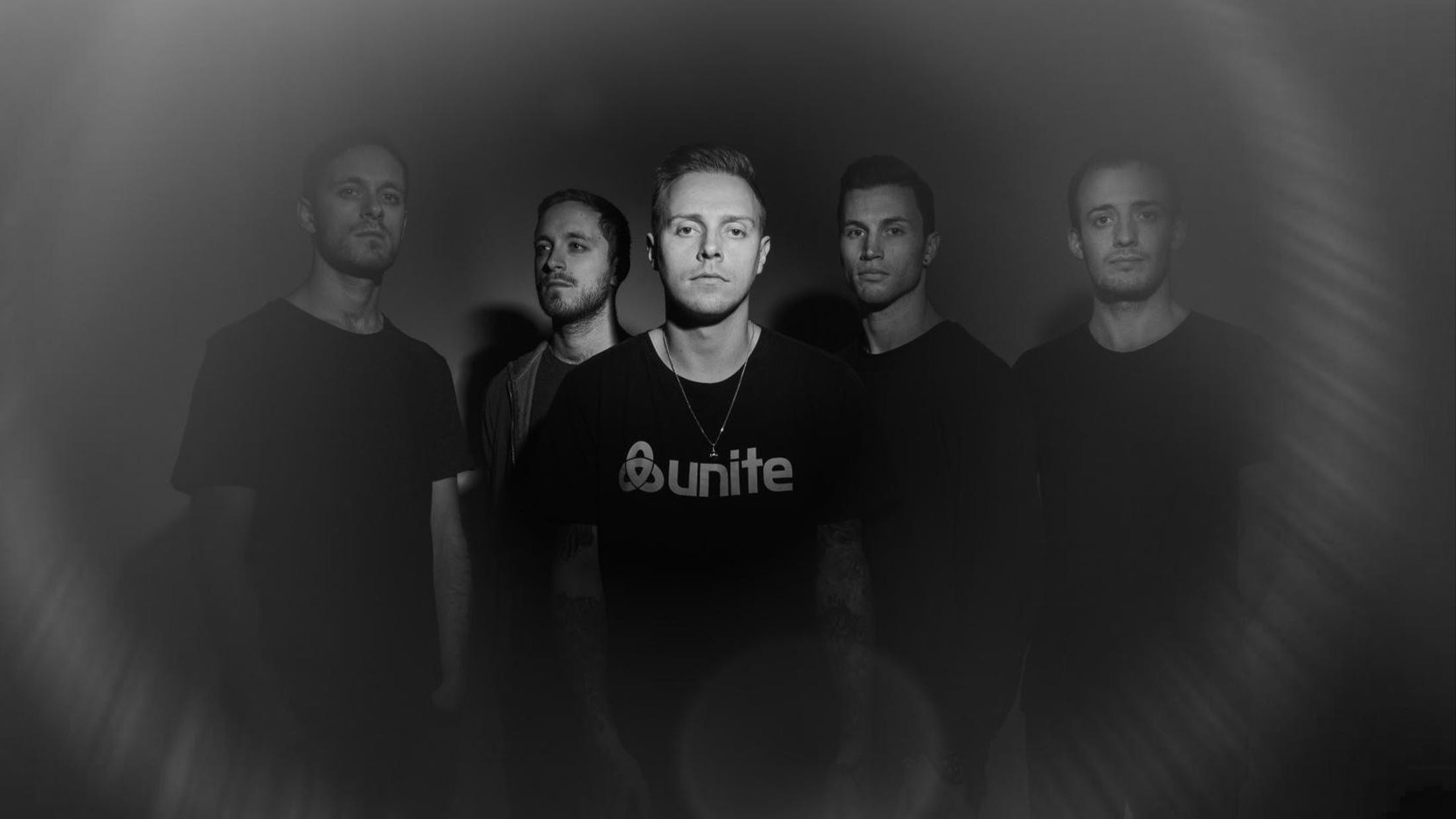 ‘Death is an open door’, the lyrics to Momento Mori tell us.

Minutes into 20 August 2016, Tom Searle stepped through that door, having lived with cancer for more than three years – his death announced by his twin brother and bandmate, Dan, via an emotional Facebook post. “He was an incredible songwriter and guitarist. He was my closest and oldest friend. He was a funny, intelligent and sweet man and he leaves an enormous void in all our lives.”

Dan’s sense of loss was acute, as it was for the rest of Architects – which then comprised of vocalist Sam Carter, rhythm guitarist Adam Christianson, and bassist Ali Dean – as they struggled with the loss of a man who, among so many other qualities, had pushed the band towards greater musical and thematic sophistication. That was particularly true of All Our Gods Have Abandoned Us, the Brighton band’s seventh album, released five years ago today.

Just a year after its release, Dan reflected on the making of the record, specifically the creative closeness between the two siblings, describing it as “one of the most enjoyable and prolific periods of creativity that we ever shared together.” Meanwhile, as Architects’ principal songwriter, AOGHAU had provided Tom with the opportunity to explore his relationship with his own mortality, which, like so many of the topics explored, has proved increasingly prescient and poignant in the years since.

This K! writer spoke to Tom in the build up to the album’s release, on a May evening in 2016. He was a little late for our allotted interview time, not for a serious reason but because he was finishing his dinner; his veganism having been inspired by Forks Over Knives, a documentary about how a plant-based diet can reverse chronic diseases. In truth, if the delay had been days rather than minutes it would still have been worth the wait, as Tom was a charismatic, erudite and intensely funny interviewee who brought to mind the quote that: “a pessimist is an optimist in full possession of the facts.”

It certainly wasn’t the kind of conversation one expects to have with someone in a band; the hour-long chat rarely strayed into the ‘wheres’ and ‘whens’ of the album, in favour of discussing nothing less than the nature and purpose of existence. What is the truth of this life none of us ask to be born into? Why do we spend so much of our lives comparing ourselves with one another, not striving for self-improvement simply for self-improvement's sake? “People, myself included, should have a look at themselves and ask: do I live my life in accordance with the values that I believe in? Am I representative of my highest vision of myself?”

Tom would allow himself a moment of immodesty when discussing Nihilist, the opening track from All Our Gods Have Abandoned Us, which features the lyric that gives the album its powerful, hopeless title. “I’m not ashamed to say I love the lyrics to that one,” he said of Nihilist. “I felt like it summed up the idea that we’ve ditched our faith and any sense of the unknown, and what’s left in its place is this corporatocracy, where corporations run the world and we’re just living in a world of stress, survival and competition.”

The arrival of COVID-19 and lockdown measures certainly brought this idea into sharp focus since; people anxious about catching a deadly virus having to remain at home, relying on streaming services and delivery companies provide entertainment and possessions to distract us from our circumstances. And what would Tom have made of the Prime Minister’s former advisor, Dominic Cummings, laying bare the Government’s part in the deaths of 130,000 people in the same week his band’s magnum opus turns five?

While Tom suggested the track Gone With The Wind wasn’t personal to him, based instead around ideas applicable to us all, reading back his words on it now, it’s impossible not to make a connection with his personal pain. “It’s a song about soul-searching,” he explained. “It doesn’t matter what the sickness is that any of us have – whether it’s physical or mental – I believe that there’s a remedy that lies inside of us. We’re so quick to turn outside of ourselves to look for someone to come and fix us, whereas we should look inside and stop torturing ourselves everyday by thinking things like: ‘I’m not good enough or I’m not attractive enough’.”

Whether Tom was referring to social media specifically is unclear, but its role in having a demonstrably negative impact on people’s self-worth and mental health grows all the time, whether because of the news agenda, online bullying, or being constantly bombarded with unrealistic standards of beauty and wealth. We’re looking for answers and validation in all the wrong places.

The album’s final track, Memento Mori, which is Latin for ‘Remember you must die’, with symbols such as wilting flowers, skulls and hourglasses being used in art as reminders of the inevitably of death. This eight-minute epic is certainly an update of that tradition, with its references to earth and snow and skin and bone, while pondering the questions we should all consider as we near the end of our lives, whenever that may be (‘Was your life worth dying for?’)

In the years since Tom’s death, we’ve lost a huge number of musical heroes, including Chris Cornell, Chester Bennington, Keith Flint, Riley Gale and Eddie Van Halen. Their lives ended before they should have, and while they live on in their art, their examples serve another purpose. When we learn that someone we love and respect has died, we celebrate what they accomplished and the legacy they’ve left behind, which inevitably makes us consider our own lives. Are we honouring the gifts we’ve been given, whatever they are? Are we endeavouring to be the kind, generous people it’s within all of us to be? If we knew our time was to be cut short, what would we do differently?

“To pretend that Tom wasn’t at the heart of everything that the band created would be to show a complete lack of respect to the amazing talent that he was,” Dan wrote in the post announcing Tom’s death. “The band will never be the same and there is simply no denying it.” Just as no person is ever really gone in the hearts and minds of the people that love them; no musician, especially one as prolific as Tom, ceases to inspire.

Dan’s statement continued: “We want to carry on, that is important to say, and we will strive to do so, but we will not release any music unless we truly believe that it is something that Tom would have been proud of. Whether or not we can achieve that is something that we will have to discover in time.” Thankfully, Architects have been able to achieve that. Their next album, 2018’s Holy Hell, not only saw them articulate their grief musically, it posthumously featured the track Doomsday, which Tom had originally intended to be on AOGHAU but ultimately didn’t make the final tracklisting.

The ideas Tom explored on AOGHAU also reverberate throughout Architects' most recent album. In the band’s track-by-track K! cover story about For Those That Wish To Exist earlier this year, Dan discussed how the lyrics to Dead Butterflies (‘I just want to live and die in peace’) echo Tom’s words from Momento Mori, highlighting the lessons he continues to teach us about what’s truly important in our lives.

Tom was always eager to reflect upon what he learned, as illustrated by his response to the question – posed without knowing about his illness – of what he would say when he met his maker. “I know a lot of people, myself included, have been these hard-nosed atheists,” he explained. “But I'm sort of over that now. When it comes to God, it’s so clouded by religion – and people are sick of religion because of the bigotry and war and prejudice – but there are some principles that are good. God is love, for example – I’m not going to get upset about that. What I want to know is: what is the truth of this reality?”

We should all strive to provide that answer with the time we have.