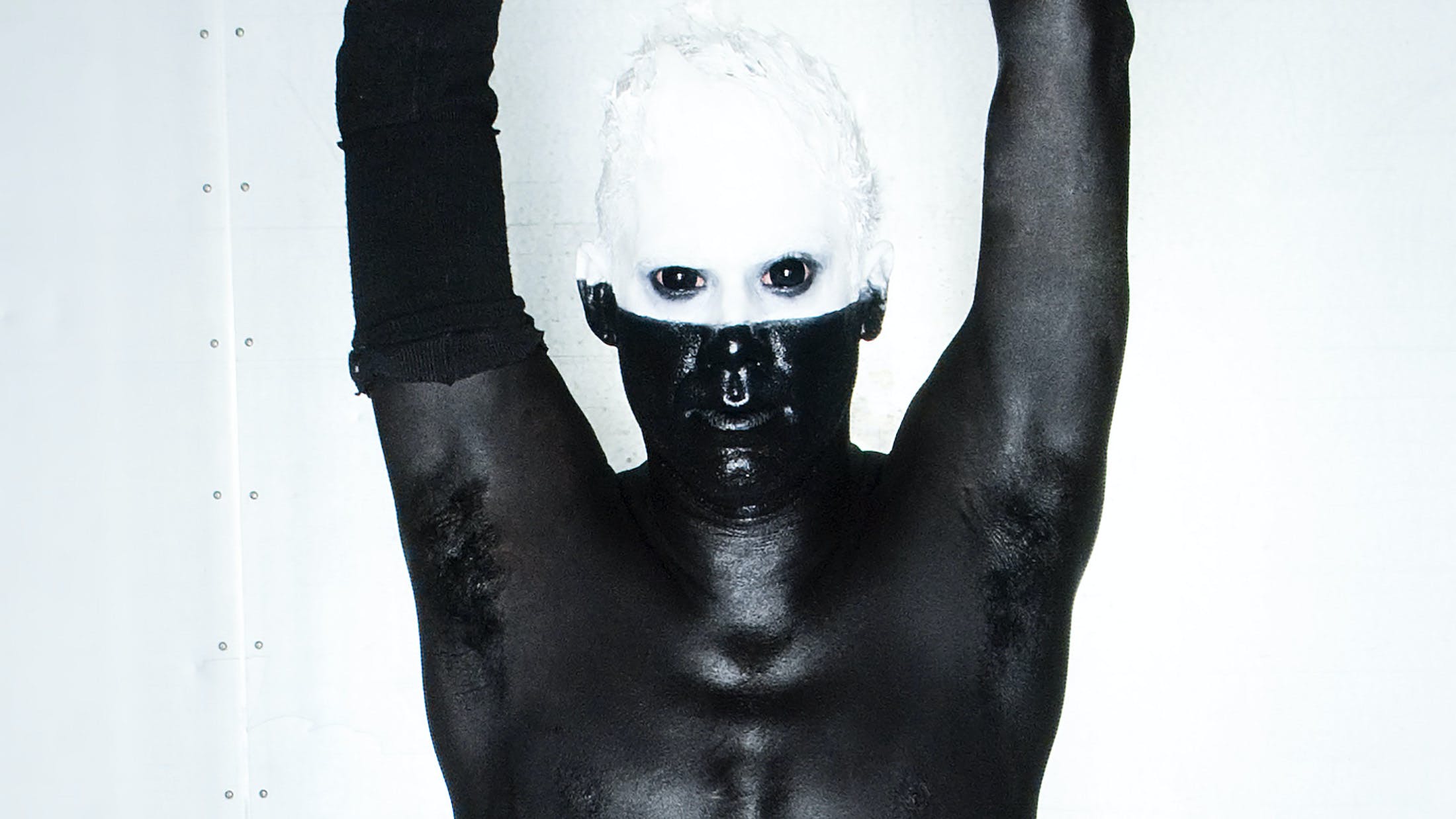 Wes Borland is the best. He was the most interesting man in nu-metal, standing among a sea of giant khaki trousers dressed like a giant witch. While everyone around him dressed fairly uniformly, limiting any and all visual experimentation to occasionally deeply odd beards, he’d be off to the side with his ceramic rabbit, his eyeballs blacked out by oversized contact lenses, and body clad only in underpants and a gallon of paint.

Here, then, are 13 of the many things to love about the most enigmatic maverick in metal…

Perhaps it shouldn’t be surprising: he’s a sculptor, among other things, and it makes sense to expect a guitarist to be good with their hands, but he still doesn’t seem like the most obvious choice to front a DIY programme. Nobody’s ever said, “Nick Knowles is basically the British Wes Borland.” But Wes did host just such a show in 2016, as the DIY Channel’s Sight Unseen followed the renovation of his Detroit home, a house he and then-wife Carré Callaway of Queen Kwong bought without having seen it. It all went well enough that his solo album, Crystal Machete, was recorded in the house.

He’s got some bonkers ideas guitar-wise

Not a lot of guitar players are influenced by the brass section, but Wes was inspired to do a move known as “dive bombing” by watching trombone players. It involves a locking tremolo system that leads him to describe his style as “snappy, complicated riffs that have a lot of dive bomb-type, whammy bar push-and-pull suction sound in them”.

The dude can paint

Wes did the artwork for Limp Bizkit, Big Dumb Face and Black Light Burns albums, but also exhibits oil paintings. He describes himself as a visual artist who just happens to play guitar. In his official, self-penned bio sent out to galleries, he describes his output as thus: “Delving into realism and surrealism, his work sometimes relies on dog penises, nudity, guns, balls, racism, and Persian rugs in order to look like it's trying to make a statement that holds some kind of weight or significance.” His gallery site is currently down, but some of his work can be seen at Gallery Provocateur. Yep, that’s a painting of a naked lady alright!

He takes his costumes extremely seriously

Whether hanging lights around his naked, painted torso, sculpting his facial hair into the style of a 1930s strongman, squeezing an octopus into his mouth or making himself look like a burnt match, Wes sees all his elaborate costumes as extensions of his art. “When I was a kid, I saw a KISS TV special,” he says. “I thought they were superheroes that played guitar. I'm not a KISS fan but man, that had an effect on me. When I entered Limp Bizkit all of a sudden we had people helping us and I didn't have to carry everything by myself all the time. I started thinking, ‘What else can I do with this? I'm a guitar player in a rock band that's starting to find some success.’ And my brain just started going, ‘Well, you're a visual artist. You know how to sculpt and you know to sew and you know how to paint. Use this.’ I needed to create something, so my body started becoming the medium in which I worked.”

Excess is a big aspect of rock'n'roll. At one point, he and ex-wife had Carré Callaway had 11 cats. ELEVEN. That is so many goddamn cats. That’s, like, an amount of cats that even cat-themed rock star Peter Criss would think was excessive.

But he really doesn’t like that guy from Staind

In 2017, Wes told the Talk Toomey podcast about an altercation with Staind’s Aaron Lewis that ended in a magnificently unambiguous slamming of his former labelmate. “That guy is such a dickhead,” he said. “So full of himself, such a dickhead, I wish nothing but the worst for him. Amen. Disgusting person. I don’t want be a shit-talker. But I have no problem talking shit about that guy. He’s terrible.” Aaron then responded by calling Wes “a bougie motherfucker.”

He generally doesn’t beat around the bush (or boat)

Wes spent the last week of his 30s onboard Shiprocked, a floating concert boat with various Limp Bizkit contemporaries. While the PR-friendly way for someone not looking forward to it would be to grit ones teeth and get on with it, Wes made his feelings very clear on Instagram, writing, “Can’t wait to see me some roided out tribal tattooed spray tanned Jell-O shot filled bohunks do their best drunk MMA impressions in the top deck mosh-pit.” He claimed to be in the foetal position in his cabin, but gave shout-outs to “all the other over-the-hill late-’90s/early-2000s bands going on the cruise”. “Let’s give these people the raging alcohol-fuelled nostalgia fest they’re paying for, guys!” Wes wrote. “I know we can do it if we tune down low enough!”

He has a pretty healthy attitude towards guitar solos

Lead guitarists can be an egomaniacal bunch, but Wes has shunned the nine-minute-solo type indulgences that the position sometimes leads people into, telling Ultimate Guitar: “The things that were important to me as a guitar player and as an artist didn't come from kind of the Eddie Van Halen and Yngwie Malmsteen school of guitar playing. I found riffs fascinating and melodies fascinating but always felt like guitar solos were maybe just kind of typical or egotistical. It just didn't seem like the important part of the song and it didn't seem necessary unless it was saying something.”

He released probably the silliest album ever

In 1998, Wes and his brother Scott (who provided keyboard parts on the first three Bizkit albums) formed a band called Big Dumb Face, a combination of Ween, Mr. Bungle, death metal, psychedelia and fantasy archetypes that nobody necessarily asked for, but totally ruled in a very specific way. Their debut album Duke Lion Fights The Terror!!, released on Fred Durst’s Geffen imprint, Flawless Records, sold about a dozen copies (Wes later described it as “a completely failed, self-indulgent project”) but all 12 of the people who bought it loved it. Here’s an excerpt from the lyrics to one track, Kali Is The Sweethog:

'There’s something in the heart of Lord Kali / Kali lights the children’s heads on fire / And causes disease to spread / But Kali is our friend / And Kali is the sweethog.'

Big Dumb Face isn’t the only project that Wes is self-deprecating about. “I had all these presumptions about what life after Limp Bizkit would be, and boy did I get my ass handed to me,” he has said. He even wrote a press release for his solo album beginning: "If I weren't the guitar player for Limp Bizkit, this sheet of paper would have been in your wastepaper basket a long time ago." When he returned to Bizkit, he said he had “got a little too big for his britches”.

He’s his own kind of nerd

A lot of assumptions one might make about Wes would be wrong. He has never played Dungeons & Dragons, trying once as a kid but struggling to get through the manual. He doesn’t smoke weed. He wasn’t bullied. He doesn’t worship Satan (but does find him funny, and see him as the element missing from a lot of metal). There are plenty of nerdy connections at play, though – his black contact lenses were made by the company that did props for Babylon 5.

Wes has always had a tumultuous relationship with his own band. It makes sense – he and Fred Durst seem like they come from totally different worlds. On one side there's this aggressive, shit-talking provocateur, and on the other there’s a nerdy warlock. There’s been a constant conflict, with the guitarist leaving the band a few times. “I didn’t like the direction that we were going in, and had developed this huge ego, and communication between me and Fred completely shut down in like 2001,” Wes said in 2015. “So at 26, I went, ‘See ya later, I’m out. I’m gonna go do something that I think is cooler than this.’”

…But ultimately loves his band

These days, Wes seems to be at peace with his day job. “I don’t hate being in Limp Bizkit,” he told Stereogum. “I’m very aware of my band. I totally get tons of people don’t like it and think it’s a joke. And then we have a really strong fanbase that are great. We’ve always had really fun live shows. I’ve always gotten to create stupid stage personas that make me laugh and hopefully could possibly rub off on someone in the crowd that isn’t used to seeing things like that that borderline on costuming and performance art. It’s like, I really like my band. Do I listen to that genre of music? No. But do I participate in my band and do I enjoy playing with those guys? Yeah. It feels like home.”