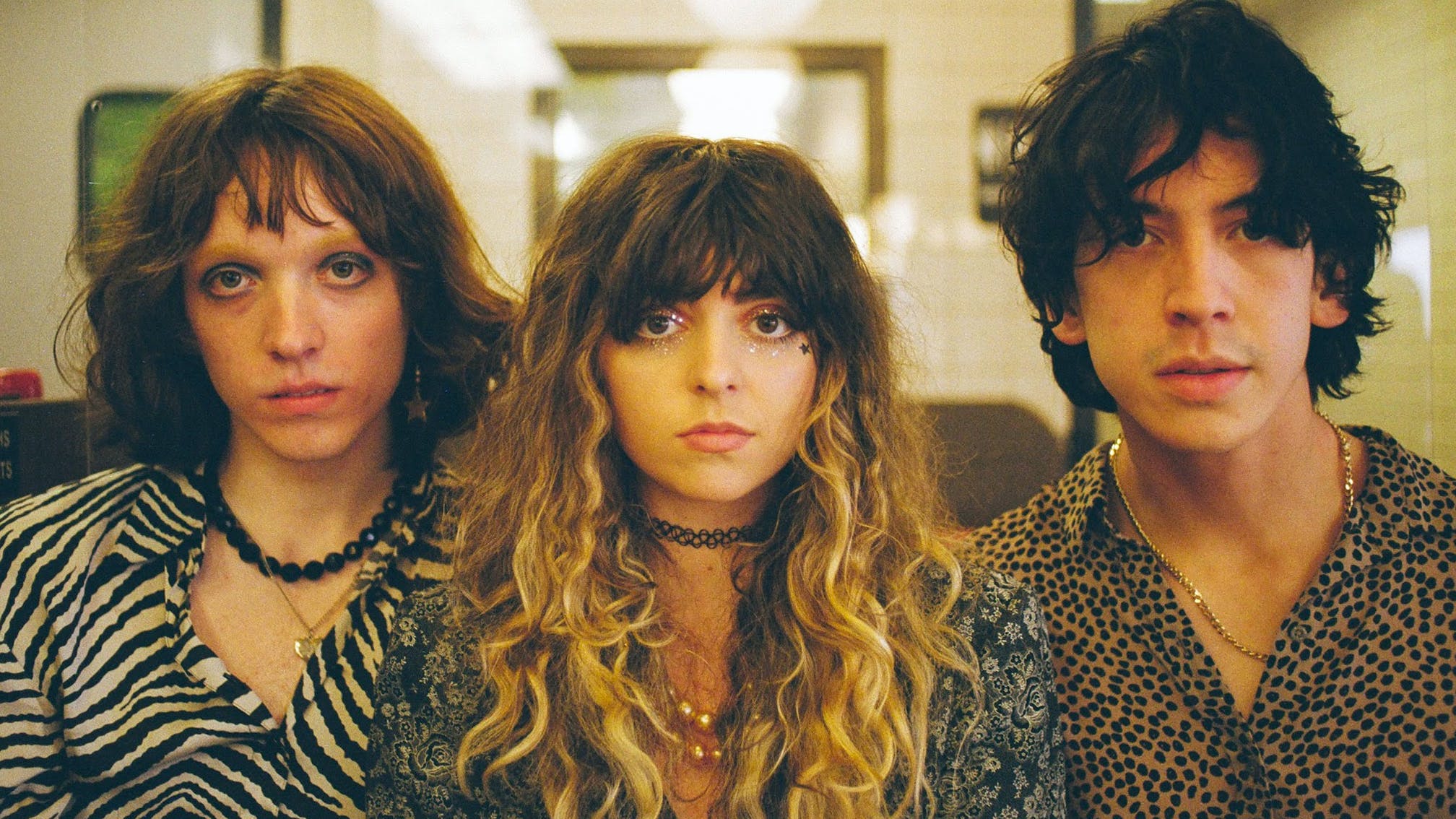 “I would be fine living out my life in a studio making art for the rest of my life, even if it meant no-one heard it.”

It seems fair to say that Demi Demitro, the singer and guitarist in Colorado-based alt.rock trio The Velveteers, is pretty relaxed about the possibility of stardom. It’s just as well, because judging by mesmeric debut album Nightmare Daydream, a set of songs that twist retro sounds into something much more vital, it may be coming her way regardless.

“We’re ready to go wherever the music takes us,” she shrugs, “and of course we want to take it as far as we can. For us that means continuing to make music that we really love and are proud of.”

Almost uniquely, The Velveteers feature two drummers – Baby Pottersmith who co-founded the band with Demi in 2014, and Jonny Fig, a gifted multi-instrumentalist who completed the line-up in 2020. The drumming duo play on two conjoined kits. The music that results is somewhat akin to a feverish hallucination; the intensity with which the rhythms hit their mark ratchet up the tension, before Demi lays down squally, Cobain-style guitar tones with lush, inviting vocals and melodies.

On songs like Devil’s Radio and Choking, ladders of drums take you up to new levels before bringing you out somewhere completely unexpected. Charmer And The Snake and Dark Horse are slinky, infectious rockers. Most of it is stripped back, accessible rock’n’roll – but it’s anything but predictable. It owes much to bands from decades before the trio were born. You can trace elements of psych-rockers Jefferson Airplane, Barracuda-era Heart and proto-punk activator Patti Smith ingrained unconsciously in their musical genes.

“We’re inspired by a lot of things, including bands from the ’60s and ’70s, along with more modern bands,” considers Baby. “We made a conscious decision that we didn’t want to be blatantly inspired by bands from the past so we were trying to rub that off a little bit, but it still showed up. It’s because we listen to that music a lot. We take inspiration from multiple decades to make something more unique.”

It’s clear from Demi and Baby’s body language and from their ability to complete each other’s sentences that their friendship is special. Demi was still learning to play guitar when they first met in their hometown of Boulder, bonding over a shared love for local classic rockers Rose Hill Drive. Both teenagers were being schooled using ‘non-traditional’ methods, with Demi receiving online tuition – another factor that aligned them.

“There was this kismet kinda energy that I experienced whenever I was around Demi,” marvels Baby. “I’ve never related to another person in quite that way before. We were each other’s entire world – we’d see each other every day and we’d make music every single day.”

They rehearsed as a two-piece, seeing no reason to expand and perhaps fearing that additional influence would mar their chemistry. Baby remembers that every time Demi showed up for band practice, she’d notably improved her guitar playing: “Each time we met she’d improved tenfold. It was so impressive to witness.” Demi just remembers wanting to be in a band with Baby, even when all she could play was E minor on an acoustic. “There was just this kind of inner knowing,” she says of those early days.

If the duo seemed hell-bent on forming a band, they were equally determined not to release any music until they were truly ready. Unlike many young artists, The Velveteers had an uncanny nose for the future, understanding not just their potential but the ascent required to crest that wave. It was when Jonny joined that things really began to bloom. “We were focused not on releasing stuff but on working hard to establish a sound,” notes Demi. “Now it’s different – now we can really represent who and what we are.”

Their bare-boned, shape-shifting sound quickly caught the ear of producer and Black Keys frontman Dan Auerbach who invited the band to record Nightmare Daydream with him in Nashville. They’d only just completed a video for the grungy, unsettling Motel #27 when a call came through asking them to open for the mighty Guns N’ Roses at Colorado’s 27,000-capacity Dicks Sporting Goods Park. Main support Mammoth WVH had pulled out of the August 16 show due to COVID – so with just a few day’s notice, Demi, Baby and Jonny found themselves waiting at the side of the biggest stage they’d ever set foot on.

At first, Demi couldn't breathe. “I wasn’t sure if I could do it – I could barely catch a breath but when we got on it all went pretty well. It was hard to tell if people liked us but afterwards I went into the audience and a lot of the people that had looked really bored during our set came up and said, ‘Wow, you guys are amazing.’ We met Duff [McKagan] and Slash; the rest were trying to be as cautious as possible, and to stay isolated. They were super nice to us.”

The future – at least in the short-term – belongs in smaller venues where their music, which has the potential to interest fans of everyone from Greta Van Fleet to Fleetwood Mac, can truly blossom. There’s a buzz now, a movement even, for younger bands getting back to basics, rediscovering rock in its most elemental form, and of course repurposing it into their own art. Consider The Velveteers to be at the forefront.

Demi nods as Baby declares: “When writing music we try to strip away any unnecessary elements, and let the songs be shown in their simplest forms. I want as many people as possible to hear them. While we’d be happy just to make music for the rest of our lives, we are also very thankful that people have started listening to it.”

Nightmare Daydream is due out October 8 via Easy Eye Sound.

Snakes & drums & rock & roll: shapeshifting rockers The Velveteers invite you into their world with Nightmare Daydream…

Now Hear This: Alex Baker on the best new rock, ambient and electro-punk

Kerrang! Radio host Alex Baker brings you the new bands you need to check out now, including The Velveteers, Cassyette and Harpy…