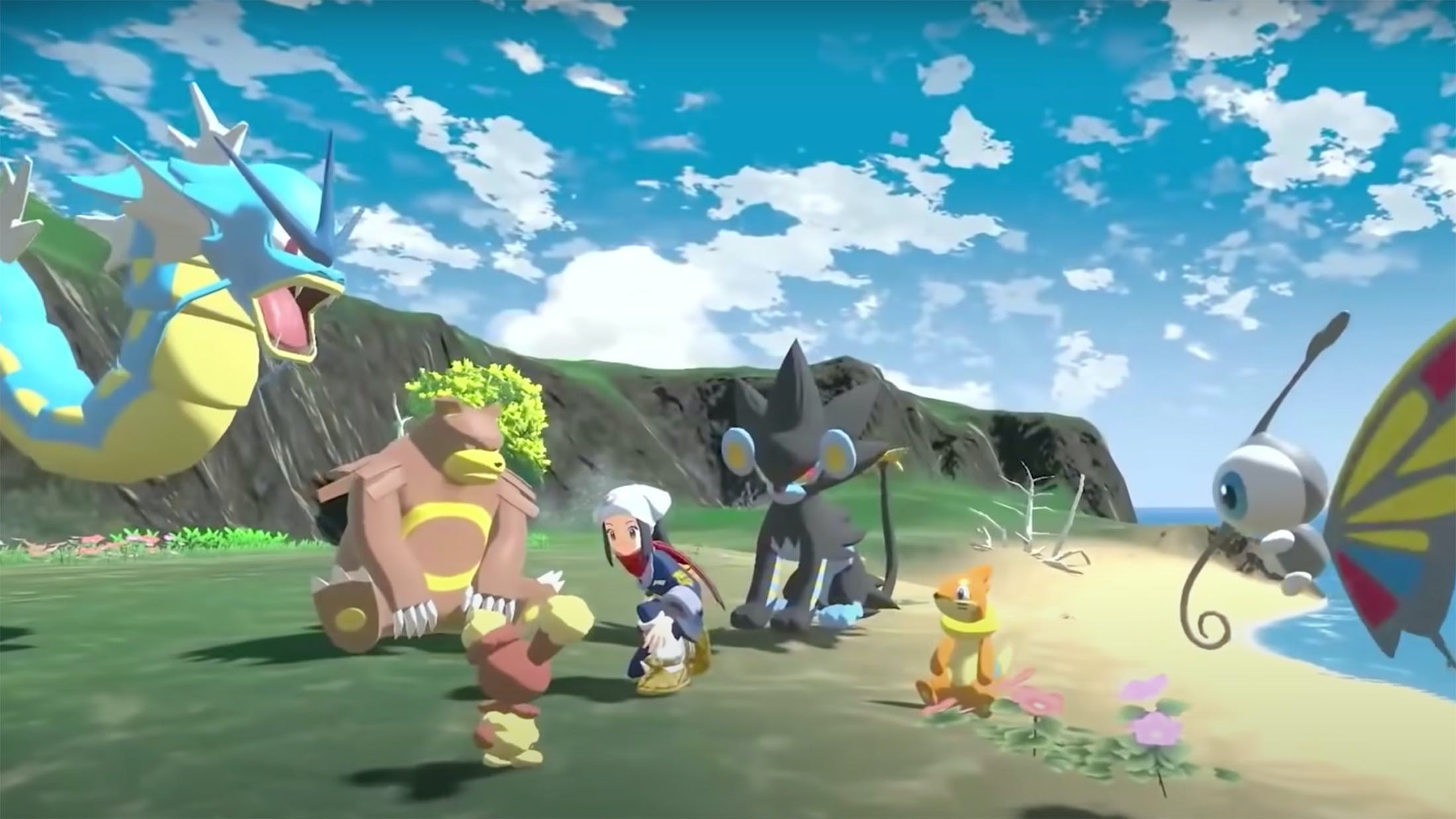 What's Fear Factory's favourite potion in a game? Reeeeeevive! I've been sitting on this joke since I was a teenager hunched over my Game Boy with Obsolete blaring on my headphones, so what better time to unleash it than my first regular gaming column with Kerrang!?

Speaking of using revival potions at opportune moments, the time is nearly upon us to make the most brutal of choices for the ninth time. Three red and white balls are placed before you, and you can only pick one. Just one faithful companion to accompany you on your adventure from start to finish. From gym to forest, from present to past.

On January 22, Pokémon fans like myself will be transported back in time to explore the ancient Hisui region in Pokémon Legends: Arceus. And for the first time ever, the three starter Pokémon will span different generations. You’ll have your pick the fire-type Cyndaquil from Gen 2, water-type Oshawott from Gen 5 and grass/flying type Rowlet from Gen 7. Talk about making a tough decision even harder! I think I'm going to go with Cyndaquil.

As far as differences go, these generation-spanning starter Pokémon are merely the tip of the iceberg when it comes to Arceus. Developers Game Freak have, frankly, gone wild with the changes. Snowy tundra, sandy dunes and vast leafy landscapes replace the modern cities and gyms we know and love (and sometimes hate!) from previous Pokémon titles.

If such a vast setting sounds like it would be the perfect backdrop to a multi-faceted open-world game, then have I got some news for you… because it is finally happening! After Game Freak tested the waters with The Wild Area in Pokémon Sword and Shield, it’s great to see the developers fully commit to the expansive non-linear map we all wanted. Think Breath Of The World but in Pokémon form! I’m just as excited to get lost in these landscapes as I am to find Pokémon in them.

It really does feel like Arceus will be the game to really sort the Wigglytuffs from the Jigglypuffs. The historic setting, the natural landscapes, the open-world gameplay seem geared toward the type of Pokémon fan that I am: an older gamer who grew up loving every aspect of the franchise. It was never "just a cartoon" to me. From the trading cards to the anime to the beloved blue Game Boy cartridge that absorbed too many hours of my life, Pokémon is a world that has always been a big part of who I am. I'm pretty sure my Lapras learned to swim before I did!

The longevity of the Pokémon brand means that it is now a generation-spanning phenomenon. Although many kids get into it then swiftly move onto the next phase (WWE comes next, right?), those lovely little monsters have stayed with me from my youth. I told you it wasn't just a phase, mum!

And yet, it hasn't always been smiles and sunshine. Often Game Freak have made decisions that have given me a headache worse than Psyduck’s. Sometimes, as an older Pokémon fan, I feel like a fucking Charizard – permanently annoyed by the overly-simplified catching system of Let's Go, for example. I tread wearily into new Pokémon products now, with fear that they will all fall victim to childish pandering. Not this time, though!

As soon as I saw the trailer for Arceus, I felt like a happy little Quagsire. I am beyond excited to delve into the region of Hisui; a place better known as the region of Sinnoh to those currently playing the Brilliant Diamond and Shining Pearl remakes. This is the first Pokémon game where we can go back in time and visit a region before it became the place we know and love from Generation 4.

But what does this historical setting mean? Just how different is the ancient world of Pokémon? Well, for one thing, there will be no Pokemon League in this game. No gym leaders to beat (haha fuck you, Cynthia!). The Pokéballs are made of wood, while the clothing and architecture in the game resemble feudal era Japan. The hub of the game is a quaint village called Jubilife – a far cry from the bustling metropolis that is Viridian City.

As for the gameplay itself, Game Freak have stated that "new action and RPG elements" will be present, and thankfully, the catching system has also been overhauled. To catch Pokémon, you will need to sneak up, aim your Pokéball and throw it at them. Once again, long grass will be your friend, but this time it will aid a stealth approach to catch the Pokémon, rather than provide patches to aimlessly trawl through while waiting for a battle. That was always one of my least favourite parts of the game and I'm glad to hear it's changed.

The new battle styles, however, do make me nervous. Players will be able to choose between two different approaches: Strong and Agile. Using the Strong style, the power of the move will increase but the speed will be lowered, while Agile decreases power and increases action speed. As someone who is not the most strategic in battle, it will be interesting to see how these new styles affect my winning ratio.

But I am excited for Pokémon Legends: Arceus because the historical setting will serve to fill in gaps of Pokémon lore and add even more depth to this enchanting, expansive world. I can’t wait to explore the mysteries of the past with nothing but an empty Pokédex, wooden Pokéballs and my trusty Cyndaquil.

Speaking of exploring, I was on tour with my band Svalbard recently and we stopped off at NQ64 in Cardiff after our show. NQ64 is a neon-splattered arcade bar (a barcade?) full of retro arcade games and free-to-use consoles. With its floor-to-ceiling cosmic decor, walking into NQ64 is like stepping into space… if space had the finest selection of games cabinets out there. After a heated round of Mario Kart between my bandmates, I settled in on the Bubble Bobble machine for the evening – a game as cute as it is frustrating! With locations in Edinburgh, Liverpool, Manchester and Birmingham, I would highly recommend visiting this bar for beverages and button bashing!

Pinball? Open world? Slug gardeners? It sounds bonkers, but this endearing game had me captivated the moment I flipped across the beautiful map to complete my first Slug Gardening mission. All the areas are connected Metroidvania style. Moving through an open world via pinball method is ingeniously unique, and makes for gameplay that is satisfyingly rewarding.