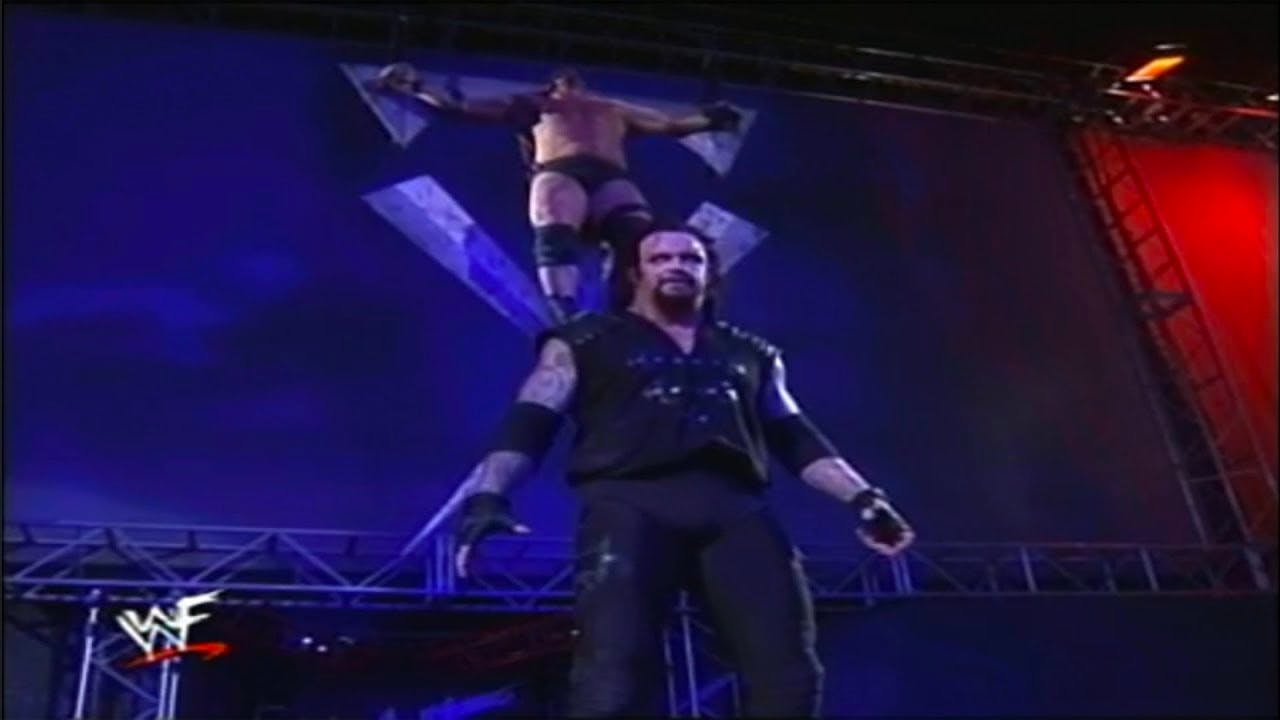 It’s WrestleMania 38 this weekend! For wrestling fans, this is basically Christmas Day, the Super Bowl and your 21st birthday all rolled in to one night of glorious grappling action. And while The Grandaddy Of Them All is the ultimate in professional wrestling, it’s not necessarily the most metal show – especially when you consider the official themes for this year are by Fitz and The Weeknd.

But there have been a number of metal moments in WWE history, and we’re going to count down the ten best for you right now. And if you’re not down with that, we’ve got two words for ya…

10The Headbangers being headbangers

The only WWE Superstars to be billed as actual metalheads, The Headbangers (or Mosh and Thrasher to their mums) would wrestle in South Park shirts, shave their heads and paint their faces like Alice Cooper. They’d also wear kilts, jump around and stick their tongues out a lot, y’know, like metalheads do. Sadly, neither of them ever went on to win heavyweight gold, but managed to capture the WWF Tag Team Championship in 1997.

There’s still some debate over this was intentional or not, and with commentator Tazz shouting “Holy shit!” over his headset, it certainly comes across as a crazy accident. They’ve recreated the spot a number of times since, but this moment on Smackdown in 2003 was like nothing ever seen in WWE and sent the crowd into raptures. What’s metal about this? JUST LOOK AT IT. It’s insane. Two huge dudes (Brock Lesnar and Big Show) going so hard that the ring implodes upon impact from the superplex.

What’s the one thing everyone knows about Jake Roberts? He bloody loves snakes. And do you know who else loves those wriggly reptiles? Alice Cooper. Put them together and what do you get? The perfect shock rock crossover for WWE’s biggest show of 1987! For Jake’s match against The Honky Tonk Man, he enlisted The Coop as his manager, presumably because they bonded over boas. There’s no decent footage of the match on YouTube, but here’s the pre-match promo with the two guys cuddled up with a snake on the sofa. Awww.

Years ago, Monday Night Raw went through a phase of featuring different celebrity hosts each week, but none were more evil than The Prince Of Darkness Ozzy Osbourne. Starting the show sat on his throne while Crazy Train blasts throughout the arena, the night gets even more ludicrous as he and Sharon have a face-off with The Miz and The Big Show before Triple H and Shawn Michaels turn up to unsubtly plug Ozzy’s book. Later in the night they host a round of WWE’s Got Talent with various Superstars. It’s very silly.

6Undertaker vs Kane in an inferno match

This was so much better on paper than in practice. Undertaker and Kane, the Brothers Of Destruction, going head to head in a ring surrounded by LITERAL ACTUAL FIRE, and the only way to win is to SET YOUR OPPONENT ON FIRE. Oh, the ‘90s. However, due to having a fiery ringside that would shoot flames into the air whenever there was any impact on the mat, the match was super sweaty and sluggish. The temperature in the ring must’ve been hellish, which probably suited Kane tbh... although he ended up losing after his arm caught fire, the daft sod.

There are a bunch of WWE Superstars who are metal fans, but Aleister Black probably looks the most metal. He’s a noted fan of Darkthrone, Venom Prison and Slayer, but he also loves a bit of brutal hardcore. For his match at WWE developmental brand NXT’s big show in Brooklyn 2017, he was played to the ring by Code Orange and Incendiary, delivering a crushing version of his theme Root Of All Evil. Metal as fuck.

3Mankind being thrown off the cell

The moment that defined the Attitude Era of WWE and made every wrestler step their game up. Mankind and the Undertaker are two legends of the business, and their Hell In A Cell match at King Of The Ring 1998 really put both men on the map. And one of them in hospital. Starting on top of the cell is a risky move anyway, but nobody could have foreseen what was going to happen next – the Undertaker hurling Mankind off the structure and through the announce table! Mankind was taken away on a stretcher but managed to climb his way back on top of the metallic structure, only to be put through the top, with a chair landing on his face, knocking one of his teeth out and into his nose. It’s bloody, is maniacal, it’s senseless violence and it’s brilliant.

Remember earlier when we said WrestleMania X-Seven was the best 'Mania? Well this performance from Motörhead was just one of many reasons. Lemmy and co. played Triple H's Play The Game theme as he headed to the ring on The Grandest Stage Of Them All to fight The Undertaker. It’s pretty funny that Lemmy obviously couldn't remember all the words, but who really cares when you’re watching one of the greatest bands ever play to almost 70,000 people at the Astrodome in Texas. Absolute scenes.

Undertaker has been through many guises in his WWE tenure. He’s been a mortician, an actual dead person and a grizzled biker dude, but it’s his Ministry Of Darkness cult leader character that saw him at his most metal. Flanked by his minions Edge, Christian, Gangrel, Faarooq, Bradshaw, Mideon and Viscera, the Ministry would often make sacrifices of different wrestlers including Stone Cold Steve Austin. Just look at how scared the Texas Rattlesnake is of Undertaker and his Ministry; nobody else has ever made Austin look weak like that. Plus it looks so metal with the robes, the lighting, the symbolic representations of evil. Stick some Black Sabbath on and you’ve got yourself a party.