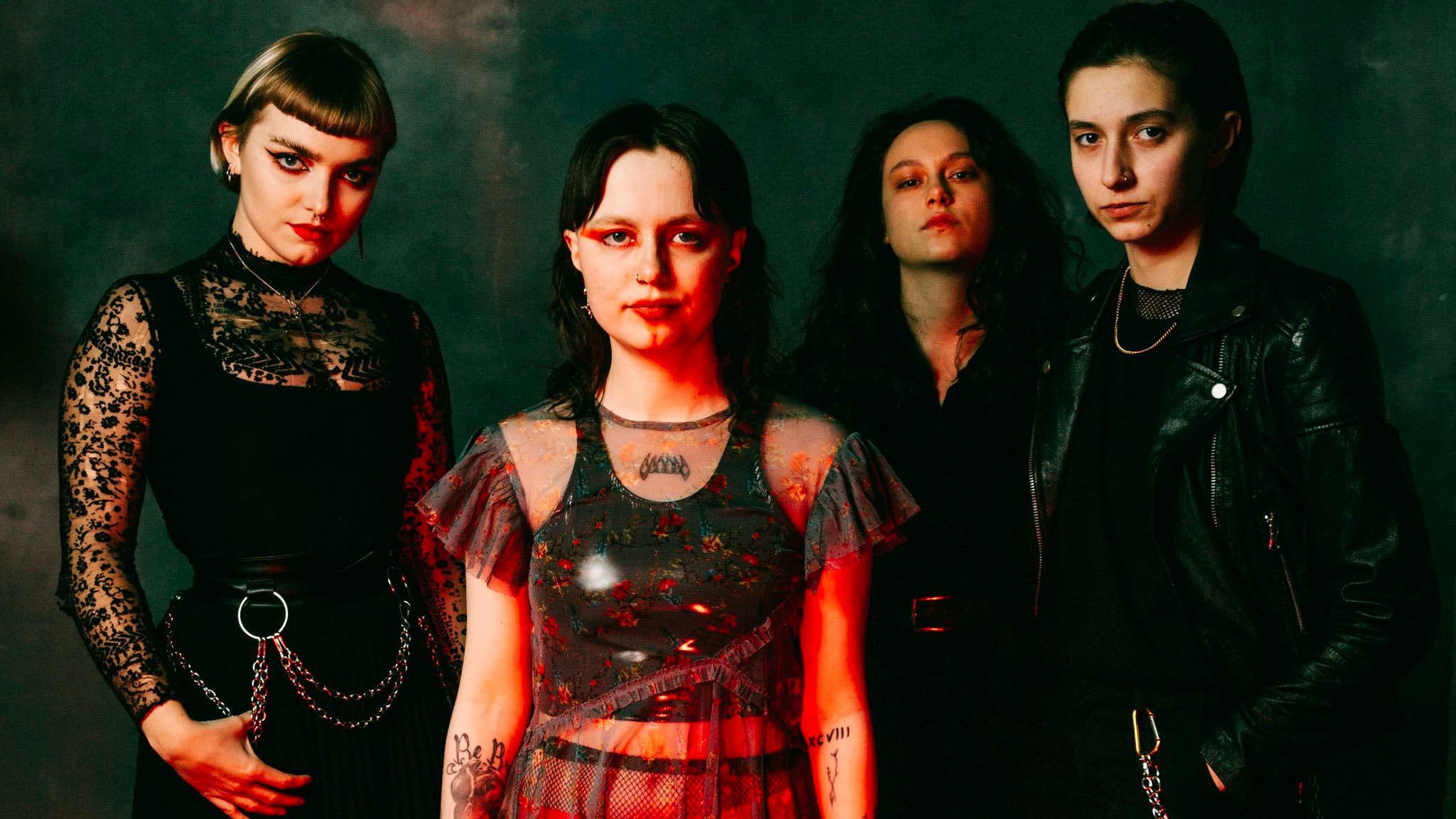 In 1612, a state-sanctioned massacre took place in the idyllic English countryside. In the verdant plains around Pendle hill, Lancashire, nine innocent women were hanged on the spurious charge of being witches. These were just nine women out of tens of thousands killed at the hands of men all over Europe during the 16th, 17th and 18th centuries. This genocide is now remembered as the witch fever.

Today, 30 miles south of Pendle hill in Manchester, musicians Alisha Yarwood and Amy Walpole are in their living room in Manchester playing with their dog.

“The world, and the patriarchy specifically, is scared of female power and has always tried to suppress and subdue it,” Amy says. “The witch is a symbol of fighting back against that oppression.”

Alisha and Amy play in a doom-punk band called Witch Fever, whose spellbinding siren song can be heard on their new EP, Reincarnate. The six track collection of fuzzed-out anti-hymns is out via Music For Nations – home to Opeth and Cradle Of Filth – and is as fierce and direct as they come, while still being rich with huge, grunge-inspired choruses.

“It’s fun to play with the stereotypes of women,” Amy explains. “We’re expected to be feminine and quiet, pretty and small, just there to be nice to look at. We want to challenge that. At almost every gig, people come up to me and say, 'Oh my god, who knew that such a huge voice could come out of someone so little! Obviously it’s a compliment and yeah I am fucking tiny, but I want to challenge that. Just because my body is small doesn’t mean that I’m small. I want to be the opposite; I want to be fucking huge (laughs). I want to take up as much space as I can.”

At the time of the Pendle witch trials, King James I was on the throne and superstitious paranoia was his forte. He was a strict protestant who lived lived in constant fear of a catholic uprising (following Guy Fawkes’ foiled gun powder plot in 1605), and was convinced that ‘witches’ were to blame for pretty much all the ills of society, including the death of his mother. In an effort to eradicate pagan beliefs from Britain, laws were put in place to criminalise anybody that wasn’t a protestant like he and the ruling class. It became a criminal offence to refuse to attend protestant churches and take communion.

“I went to a charismatic Christian church [Airedale church in Keighley, West Yorkshire] until I was 16 and it was a very toxic place,” Amy begins, lucidly. “A lot of shit happened that shouldn’t have happened. It was basically a cult in the guise of a modern church. I had some difficult experiences. I have always used art and music as a way to challenge that.” She traces the band’s subversion of biblical imagery and her lyrics back to these difficult teenage years. “Things that happened there were traumatic, but now as an adult it’s fun to play with it and challenge it. It’s cathartic.”

In the music video for In Birth, Amy is a raging punk pastor screaming, 'Get out of my c**t, I’ll fucking eat you alive!' from a church pulpit. The dramatic piece of film ends with Amy drenched in blood, her bandmates rocking out around her in the house of God.

Amy explains that she has every respect for people that have faith, although never having it herself. “I think that the people in the church, men specifically, used this 'power of God' and the idea that they were a 'prophet of God' to control people and abuse their power. They did it to stay powerful, I guess.”

Back in 1612, the pagan belief systems that King James feared were ones that promoted season-based ritual, herbal healing and a strong kinship with the natural world. Notably, though, they often centered around and worshipped women and female spirits (e.g. Mother Earth). In the eyes of vindictive and insecure leaders, like King James I and many others around Europe, these beliefs were seen as a direct threat to the patriarchal system that served them. It was around this time that witch fever took hold and women were in the crosshairs.

The criteria for a witch accusation to be thrown at you included; being over the age of 40, being single, being poor, using herbal remedies and having a disability. Once accused it was near impossible to prove otherwise. The respect once held for the female elders and healers in the community turned to demonisation and fear – one that can still be seen clearly every Halloween when children dress up in 'old hag' witch costumes.

But what has changed since then? “We’re not getting killed anymore, but we also kind of are,” Alisha says, bluntly. Amy adds, “There are more subtle things, like poor healthcare and abortion laws, things like that. We might not get burned on the stake anymore, but all the smaller things come together. There is a constant undercurrent of sexism that women are battling against every day. It doesn’t have to be really obvious for it to be damaging.”

Citing the post-punk of Savages, gothic literature and horror films among their influences, Witch Fever have toured with Bob Vylan and Crows, and are heading out to Europe with IDLES early next year. They’ve even worked with Creation Records’ Alan Mcgee. “It’s been five years of just solidly gigging and now things are feeling hopeful,” Alisha says. Amy goes on to explain that “it’s been a long haul of Megabuses and not being paid well and being fucking knackered. We’re still fucking knackered, but there’s no Megabuses anymore! (laughs). It’s just really exciting. It’s nice to get recognition and for people enjoy what we do.”

The witch trials that took place in Lancashire four centuries ago remain some of the most famous in UK history. Today if you visit Pendle hill you’ll find a statue of Alice Nutter, one of the innocent women murdered in the witch trials. She, like thousands and thousands of others, protested her innocence until her final breath.

On their Reincarnate EP, Witch Fever channel the forgotten voices of our oppressed foremothers and – paired with their potion of grunge, punk and doom – it makes for an important and addictive listen. The fight against religious persecution and systematic misogyny is far from over, and these four angry Northerners will never give up the fight.

Reincarnate is out now via Music For Nations.