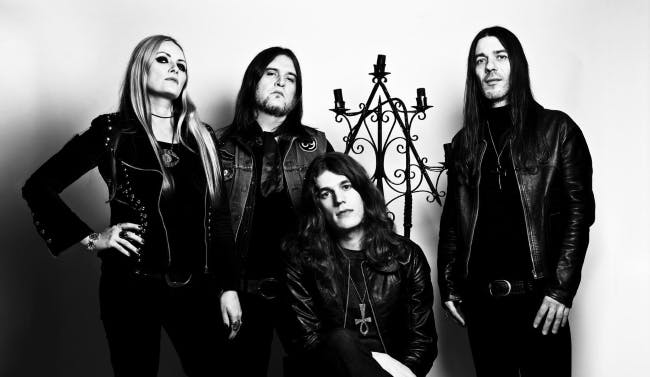 Electric Wizard's new long playing rekkid, Wizard Bloody Wizard, is coming out November 10th, which is should be exciting news for metalheads, weirdos and delinquents the world over. The fully analogue LP was produced by band leader Jus Oborn and guitarist Liz Buckingham in their own Satyr IX recording studio, and we couldn't be more psyched to hear it.

“It’s an anti-studio, really," says Jus, "We wanted to put as little between the musicians and the tape as possible. We needed to take stuff away and use less equipment 'cos I think the raw sound of the band is killer. Studios have progressively made the recording situation more difficult and convoluted. I always think the best recordings are the simplest and most basic ones. So, yeah, we built the studio that we wanted… mics, mixing desk, tape machine… that’s it. No bullshit.”

No bullshit is right. Check out See You In Hell, the first single off the album, right here:

“This was the first track from the new LP sessions,” Jus explains,“and right away we knew this was it… the new direction we should go in. Real heavy music… really basic heavy rock, blues-based but brutal. I think a lot of modern heavy music has disappeared up its own arse… it’s too pretentious and technical. We wanted to get back to that primal sound… over-amplified Blues… Hendrix, Blue Cheer, Zeppelin. They took that music then turned it up… so we thought, let’s do the Blues in our style. Heavy, heavy super fuckin’ Blues, total snail-paced funeral boogie for this 21st century hell. I guess it’s meant to be hopeless, but it’s also defiant and unbroken.”

Aren't these guys just the best? Roll on November 10th, we can't wait for the rest of the album!